Two Sides of the Coin

You'll hear gossip that Arnora's husband has been arrested. Go to her house to hear her version of the story - quite different from what people say. Anyhow, go to see Jorundr in the city prison.

He won't talk to you unless you're a prisoner too. Commit any crime and decide to go to jail. His story seems to be 180 degrees from what you've heard from Arnora. He'll ask you to kill her for him.

Talk to Arnora again and you'll be given a final choice. Fight her now to get her amulet or let her give it to you willingly in order to make Jorundr think she's dead.

Upon seeing the amulet, Jorundr gladly tell you the location of a buried treasure. Go to the map marker. A corrupted city guard will appear and try to kill you. Defeat him and claim the treasure. Visit Arnora's house once again, only to confirm that she has been killed by that guard.

In random NPC conversations you'll hear that there's a vampire hunter in town. He lately executed one of the townsfolk. Go to Bradon Lirrian's House and talk to Carus Runellius. Raise his disposition and he'll tell you the story behind the assassination. Talk to Bradon's wife, Erline. She'll beg you to clean her dead husband's name.

Raynir Dralas, said vampire hunter, is staying in Olav's Tap and Tack. Talk to the innkeeper - raise his disposition high enough and you'll get a key to Raynir's room. There's Gelebourne's Journal to be found there, behind one of the wardrobes. Take it to Runellius. Now it's time to find Raynir himself - try Boreal Stone Cave.

HINT: You'll have to be quick from now one, you only have one day to stop Raynir from fleeing. 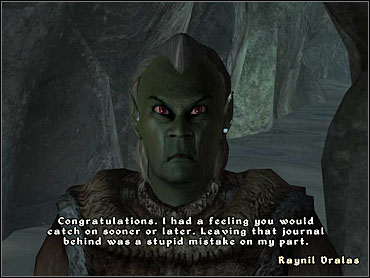 The only solution here is to kill the Dunmer. When you get rid of him, take the keys from his body and use them to get an amulet from a chest nearby. Take it back to Erline - she'll gratefully unlock its true power and give it to you for your help.

When walking around Bruma, you'll be approached by local Countesses' steward, Tolgan, who will tell you to visit his lady in the castle. Head there to find out that she needs your help in recovering an Ayleid artifact for her collection. When you're done talking, go to Dragonclaw Rock.

Go west, towards the Sentinel statue, and then north. You'll see the entrance to Pale Pass. There's a skeleton inside, take the orders that lay next to it. Leave the cave using the second passage and head to the ruins pointed on your map. There will be some Ogres along the way.

Serpent's Trail is quite a big dungeon, consisting of a few levels. Head through them in the following order: Mouth of the Serpent, Scales of the Serpent, Venom of the Serpent. There's also a fourth level - Fangs of the Serpent, which you can cross instead of Scales. On the last level, there will be a ghost Akaviri captain. Give him the orders taken from the Pale Pass skeleton. The item you are searching for is in a room past him. Take it back to Countess Carvain and you'll get a ring called Ring of the Vipereye.

HINT: You can fast-travel as soon as you leave Serpent's Trail.