Quest From: Gogan and Maelona;

When talking to Anvil townsfolk, you'll hear that there's a female gang threatening the city. You'll be told to talk to Gogan about it, who turns out to be their last victim. Talk to Maelona in his house. She'll tell you to reclaim a valuable ring from the gang's hands.

Go to Flowing Bowl in the docks. In a few moments you'll be approached by two gals, who will tell you to meet them in a house outside the city (they'll tell you to join them if you are a woman).

Go to the house indicated by a map marker and enter it after 11 PM. Sooner or later, fight breaks out. You'll have to defeat all the girls. After they're dead, Gogan and Maelona appear. It turns out they are sort of secret agents and just had you do their Job. As your reward, you can take anything you like from the house. Look around - you'll find some interesting stuff here (including possessions of gang's former victims).

The Ghost Ship of Anvil

There's a ship named The Serpent's Wake in Anvil docks. On its deck there an elf Varulae, who'll ask you to go to the storage hold and find a magical artifact that is in there. Go below the deck, and enter captain's cabin. Take a key from his body - you can use it to open the treasure chest nearby. Go to the lower level and follow the map marker. You'll eventually find a crystal ball you're looking for. In exchange for it, Varulae will give you an enchanted cutlass, Redwave. 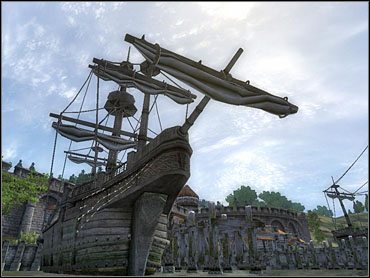 Where Spirits Have Lease

Velvyn is in The Count's Arms. He'll offer you to buy his mansion for 2500 Gold. Agree and you'll be able to enter Benirus Manor in eastern part of the city. Enter your new house and have some sleep. You'll be attacked by ghosts. Go downstairs and you'll see a broken flask on the floor, together with a skeletal hand and a note. You have to find Velvyn, as only a member of Benirus family can open the secret passage, where the riddle's solution is hidden. 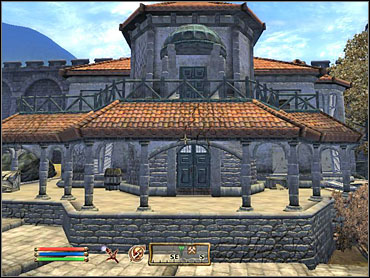 Ask around the city about Velvyn. You'll know that he's off to Imperial City. You'll find him in The King and Queen tavern in Elven Gardens. Tell him everything and he'll agree to back to Anvil with you. Meet him again in The Count's Arms and follow him to the manor. Enter the basement.

Approach the map marker. Velvyn will open the passage for you and run. Touch the altar and use the skeletal hand. The necromancer will come back to life, and you'll have to make sure his visit among the living is as short as possible. When you (re)kill him, go back to The Count's Arms.