Character creation process may seem to be the essential feature of every RPG, but in Oblivion things are a little bit different. Your initial decisions and choices don't seem to influence all the hours of gameplay that follow as much as you'd expect them to. Obviously it's important to connect the style you prefer with appropriate race, sign, and class - things get a lot easier then. Don't treat these choices too seriously, though. The most (only?) important thing about character creation is choosing the right Major Skills. We'll get to that. 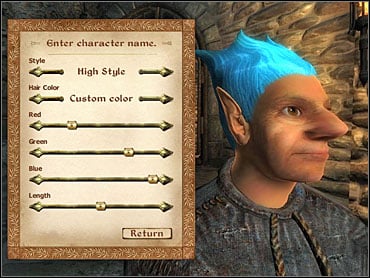 Careful with that editor, son.

The most basic of all values that define our hero are the Attributes. There are 8 of them.

A few words of explanation for the above table. What are "governed skills"? The answer requires to say a few words about the leveling-up system.

We level up each time we raise our Major Skills (see the "Skills" section) 10 times. It doesn't matter which and how many times each of them was raised - the number of additions must equal 10 and you're given the message that you should rest and meditate on what you've learned. When you do, welcome to the higher level.

The perk of getting a new level is the ability to raise three of your main attributes. Basically, you add one point to each of them. You must have noticed, though, that sometimes there's a multiplier next to a certain attribute, allowing you to raise it by 2, 3, 4, even 5 points at once. Its value is based on the number of additions you make to the skills governed by that attribute. It might seem a little bit complicated, but look: Strength governs the skill of Blade. If you raise Blade 10 times (and it's one of your Major Skills), you'll level up and get a x5 multiplier for Strength.

HINT: The skills you work on, that in the end determine the multiplier's value, don't have to be in your Major Skills. That means that by working on the right Minor Skills you can get, for example, x5 multiplier for all three next-level additions. Everything you need is a little patience in training them.