All these quests have 1 thing in common: you have to make an offering in order for the prince to speak with you. To know what kind of offering the prince demands, you have to speak to his or her followers, sometimes raising their disposition to a higher level. In most cases you have to offer items that are found by certain enemies' bodies, such as Bear Pelts. Sometimes, however, things get much more complicated.

The last quest - Hermaeous Mora - is available only when you complete every other daedric quest.

Also, keep in mind that Daedric Quests are among few (if not the only ones) missions that actually require your character to be on a certain level before you can get them.

Talk to Mels Maryon. Raise his disposition in order to make him talk. He'll tell you that you need some Glow Dust in order to summon Azura. That substance is left by dead creatures known as Will-o-the-Wisps. Those "sparks" can be found a little bit to the north. Wait until 6 a.m. and then present the gift to Azura. She'll tell you to go to the Gutted Mine.

You'll have to deal with 4 vampires here. They can be a problem, so watch out. There's a lot of silver around the mine, take time to get some if you need cash badly. When you return to Azura, you'll receive an artifact - Azura's Star, a kind of non-disposable Soul Gem.

Haekwon will tell you to offer Daedra's Heart to the prince. The easiest way to get it is throughout the main plot, as it can be found by all Dremoras' bodies. If you've already finished the main quest, find a dungeon filled with daedric monsters (try Brittlerock cave, 1s29) 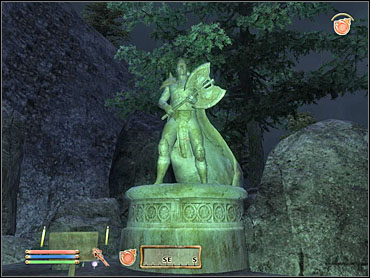 Boethia will offer you to take part in a tournament. When you're ready, step into the portal. Open your cage and go left or right - it doesn't really matter. Either way you have to go and defeat 9 enemies, each of another race. When you defeat them all and thus win the tournament, Boethia will open another portal for you. Talk to the statue once again, you'll get a nifty sword Goldbrand, dealing some Fire-based damage. 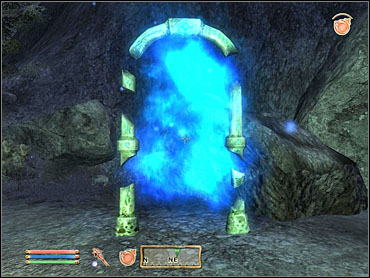 Talk to Ma'Raska to know about the offering. Give 500 Gold to Clavicus. He wants you to retrieve a certain sword. Go to Pell's Gate, south of Imperial City. Once you're there, Barbas will talk to you - he's Clavicus' dog and servant. He tells you not to complete this quest. Ignore him for now.

Go to Irroke the Wide's House and talk to Irroke. Use Speechcraft on him, and he'll tell you about Umbra - a sword that took control over his apprentice. Go to ruins of Vindasel.

Watch out for the trap on the floor in the first big room. Go towards the map marker to meet Umbra herself. She'll give you a choice: you can fight her or just leave. Leaving is not an option for a true gamer and you know that. When you defeat her, take her sword. 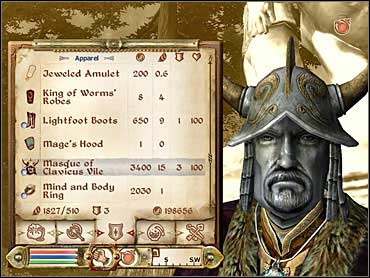 Go back to Clavicus' shrine. You can either give him the sword or tell him that you're keeping it to yourself. Do as you will. In the first case you'll be getting a Masque of Clavicus Vile, fortifying your Personality by 20 points.

Hircine's quest is, all in all, a unicorn hunt! Go to Harcane Grove, south of here. 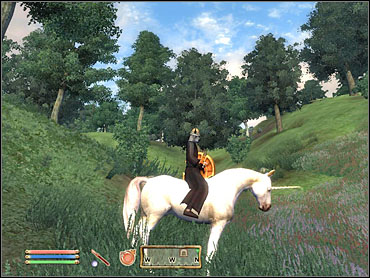 Yes, it's true, you CAN ride a unicorn in this game.

The mission is simple. Unicorn is surrounded by some minotaurs and trolls, and is no real threat itself. You can kill it and take its horn without any problem. The thing is, that you can actually ride it - and it's a fairly enjoyable thing to do. Take advantage of it, have some fun. Then kill it. Hey, it's a cruel world.

When you give the horn to Hircine, you'll get a unique light armor Saviour's Hide.

Talk to Shobob gro-Rugdush. You have to raise his disposition a bit. He'll tell you that Malacath wants some Troll Fat as an offering. When you get it and give it to the statue, the prince will send you to Lord Drad's Manor.

Talk to Drad about ogres working in his mine. Be nice to him ("I admire your efforts.") and he'll give you the mine's location. If you upset him, you'll have to talk to his wife. Either way, go to the new map marker.

Inside the mine you have to free two groups of ogres. The guards won't attack you until you start doing something suspicious. You can picklock the cages (Hard locks) or use the key, stolen (or taken) from any of the guards. When you free both groups, go back to Malacath. If you're interested in how the story ended, pay Drad another visit - he and his wife are now slaves to those ogres. Well, that what I call a U-turn.

Dredena Hlavel will tell you that Mephala wants Nightshade as an offering. You can find some in The Main Ingredient in Imperial City Market District. Your quest seems complicated: you have to go to Bleaker's Way and turn two families who live there against each other. 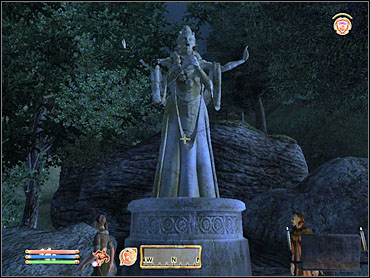 You have to kill two people: Nivan Dalvilu and Hrol Ulfgar. Go to the Hrol's house. There's a Ulfgar Family Ring on the table on the first floor. Go to Nivan Davilu's House to find a Davilu Ceremonial Dagger. Now you can kill the two men, planting the evidence that point the opposite families as murderers. Leave the ring by Nivan's body, and the dagger by Hrol's body.

Inform any of the townspeople about the assassination. You'll witness a massacre, in which two families slay each other. Go back to Mephala to get your reward, Ebony Blade.

This time the offering is quite easy to get, as it can be any substance that you get from the undead's bodies. 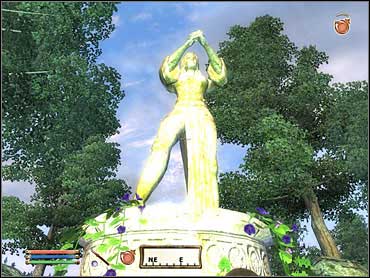 Meridia will tell you to go to Bowling Cave and get rid of necromancers that live there. The cave is not a big one. Your victims wait on the second level, Howling Cave Lower Galleries. They are not very powerful themselves, but are accompanied by numerous undead.

Once you're done with them, go back to Meridia to get Ring of Khajiiti, fortifying your speed by 10 and giving you constant, 35% invisibility.

Amir will tell you to give Molag one Lion Pelt as an offering.

Molag Bal has an interesting task for you. He wants you to force Melus Petilius to.. kill you. You have to make sure Melus kills you with the cursed mace Molag provides. Go to Brindle Home. 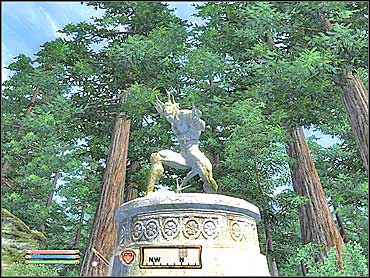 Talk to Tobal (he's likely to be fund home at night). Ask him about Melus - Speechcraft might prove useful. He'll tell you where your target lives. Melus leaves his house about 10 A.M. every day to pray at his wife's grave nearby. You have to attack him over there, as he won't pick up the fight anywhere else. Drop the Cursed Mace on the ground nearby and hit Melus. He'll get upset and attack you, picking up the mace. Don't fight him - just let him kill you.

You'll wake up by Molag's shrine and get a Mace of Molag Bal as a reward.