First go to Irlav Jarol and talk to him about Vahtacen. You have to go there and find Skaleel, who's supervising the research. She'll tell you that the mystery of the great pillar remains unsolved and you should take care of it.

You'll meet Denel on your way to the Pillar, who'll bring mysterious notes on the walls to your attention. Go back to Skaleel and ask her for a book that will enable Denel to translate these inscriptions for you. Talk to him again to hear what they mean.

In order to solve the puzzle, you must use 4 spells on the pillar in the right order. Start from using a fire spell at point A, then the frost spell at B and so on. If you lack the spells needed for this task, all of them are in a chest near Denel. The first two are pretty obvious. Use "Sever Magicka" at point C (approach the column, you have to stand next to it in order for this one to work!) and "Elevate Magicka" at D.

So you've solved the puzzle. Now go to the lower level of these ruins, fighting off ghosts and avoiding traps. In the end you'll find yourself in a huge room. Go up the stairs and hit the button, so you can approach the treasure hidden in the metal cage. To get rid of the cage itself, use another button, the one right by next to it, on one of the pillars. You'll find an ancient, elfish helmet. Leave this place using the shortcut that's been marked on your map. Inform Skaleel about your findings and go back to Irlav. 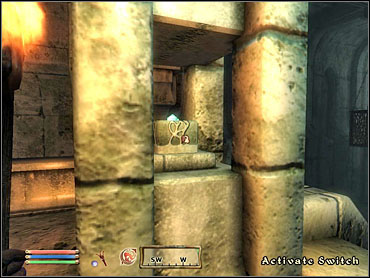 Raminus will send you to the University Archives to inquire Tar-Meena about Black Soul Gems. She'll tell you to look through a book called "Necromancer's Moon". It's laying on the table nearby (look at the screenshot). Talk to Tar-Meena again. Return to Raminus, then go and talk to Bothiel, who's also hanging out somewhere in the University grounds. 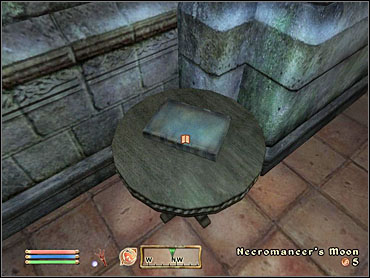 You'll receive Falcar's note from here. Raminus will point you towards a cave called Dark Fissure.

Near the entrance, there's a necromantic shrine. Wait until Thursday (Thurdas) night, and you'll see the process of creating Black Soul Gems by necromancers. 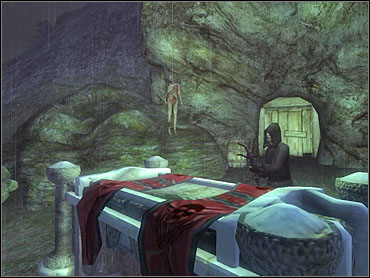 When you get an appropriate journal entry, go back to the guild. You don't have to enter the cave at all.

HINT: You can create you own Black Soul Gems in here, just the way necromancers do. Just leave normal Soul Gems in the shrine and wait for the mysterious light to appear on Thurdas. Then cast a Dispel Magic spell on the shrine, and you're done.

From now on, your tasks will be assigned to you directly from the Arch-mage himself. The first mission coming from him is to find and save Mucianus Alias. You have to get him out of Nenyond Twyll, an Ayleid ruins occupied by necromancers.

Once inside, you'll meet Fighragaer, the only survivor of the battlemages group that was sent here before you. He'll tell you to follow him and show you exactly why is everyone else dead - he just walks right into a trap and dies. Nothing like a professional battlemage, eh? Avoid the trap that killed him and head to Nenyond Twyll Riellesel.

You will be approached by a necromancer Mariette Rielle, who tells you that Mucianus has already been transformed into a zombie. Defeat her and enter the big room filled with enemies. Deal with them as you like, and use the button on the north-western wall. Inside the hidden room, there will be Mucianus in all his misery. You can kill him or just leave, it doesn't matter.

Go back outside using the other, shorter way. When back to the first level, use the switch to open the path.

Once you get back to the University, Raminus Will grant you the rank of Warlock, and Traven will have another task for you to do.

Information at a Price

It's time to pay Skingrad's vampire ruler another visit. Talk to Hal-Liurz, who turns out to be the new steward, and wait for Hassildor to come. It seems he has some essential information for the Guild, but will share it only when granted a very special favor. 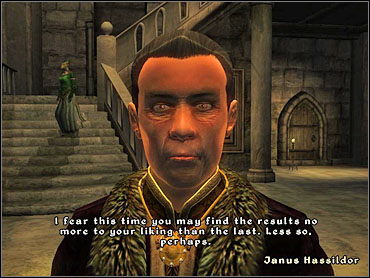 Bloodcrust Cavern near Skingrad is being used by some vampires as a lair. That resulted in several vampire hunters to come to the city, which can lead to some serious trouble provided the count's special state. You can deal with the problem in two ways: kill vampires and hunters separately, or confront them with each other. The second way is much more enjoyable.

The hunter's chief resides in Two Sisters Inn. Tell him where the vampires' lair is (you might have to raise his disposition a bit so that he believes you), and give hunters some time to get there. After a few hours go to the cave yourself and finish off anyone left standing - no matter which side they're on.

Go to Hassildor once more. He'll tell you that a powerful necromancer named Mannimarco is in Cyrodiil, and his intentions are to destroy the Guild completely. Go back to tell Traven the news.

Before you get this mission, you must give Traven 2 days to consult the rest of the council. He'll tell you that the situation is getting worse all the time.

The Guild has lost contact with its branch in Bruma. Hannibal will tell you to go there and see what happened.

It turns out that the guild has been attacked by the necromancers. Go to the basement (Living Quarters) and reach the other side of the corridor, then enter Jeanne's office. You'll meet a necromancer, who has to be killed after a short talk. When she's dead, J'Skar will reveal himself and tell you exactly what happened. Go back to Traven.

Talk to Raminus Polus to be promoted to the rank of Wizard and learn a spell called Wizard's Fury.