A little weird guild leader Dagail will tell you to talk to Agata about her missing amulet. She will order you to investigate the local guild mages, who might know something about it but aren't very eager to share that knowledge. The gossip will lead you to Kalthar, who openly protests about Dagail being the boss around here. Tell Agata about that - she'll tell you to question Dagail again. You will be told a riddle, which is automatically solved by the game: head to Fort Blueblood, east of the city. 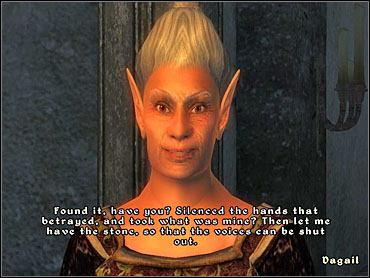 The fort is occupied by some bandits. Defeat them and enter the second level (Fort Blueblood Halls). The tomb's key is being held by Marauder Warlord. When you get it from here (don't expect peaceful solutions to work here) enter the crypt and take the amulet from the coffin. When you head back, you'll meet Kalthar. No other way but to kill him here.

There's a short way outside indicated on your compass. The first door can be opened by warlord's key, the second - with a level on the right. Go back to Leyawiin and give Dagail her property.

Adrienne tells you to find Erthor, a guild member who hasn't given any signs of life in a few days. Talk to Argonian named Druja to find out that he's to be found in Bleak Flats Cave. Talk to Adrienne again - she'll give you the Weak Fireball spell. Go to the aforementioned cave. 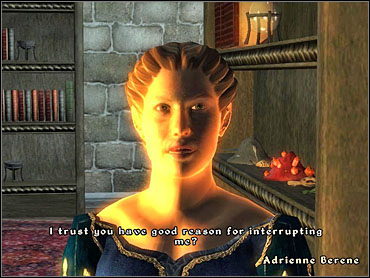 Finding Erthor is not a problem, but he won't leave until you defeat all the zombies inside. When you're done with them, talk to him and agree for him to follow you. When you're back in the guild, Adrienne will gratefully give you the recommendation.

When you have all 7 recommendations, go to The Arcane University in Imperial City. One there, talk to Raminus Polus. Now you can think of yourself as a full-time Mages Guild member.

Your first duty will be to obtain some special wood for your very own mage's staff. Head to Wellspring Cave. It turns out that something's not right. One of the mages you were supposed to contact lays dead before you, and you are attacked by a group of Necromancers. You'll find a key while searching the body of one of them, which you can use to open the passage at the other end of the cave. There you'll face even more enemies and discover that the second mage you were told to find is as good as dead. Well, no matter. In a stone chest nearby you'll find an unfinished staff - that's what you're looking for.

Raminus will be a little upset with what you've discovered. While he talks to the council, you finish up with the wand. Enter the University and find Delmar. He'll ask you some questions about what type of staff you want to have. Answer him and wait 24 hours. Then you can pick up your new item from the closet at the back of the room.

HINT: There's an Altar of Enchanting in here - use it to create your own magical equipment.

Raminus will tell you to go to Skingrad to recover a book from count Janus Hassildor.

Talk to the steward Mercator Hosidus, who'll tell you to go back the following day. Wait 24 hours and talk to him again, so he can tell you that the meeting will take place outside the city gates, at 2 P.M.

As you might have guessed, the whole Hing is a set-up. Mercator and two allies of his will attack you. After the fight, count appears and explains you some of the things that occurred. Go back to Raminus and report.

You'll get a Spelldrinker Amulet for completing this task.