To become a member, you have to kill an innocent. Bandits and other quest-related murders don't count. The question is who to choose and not to make any other quest impossible to get or finish? Most of the NPC in the game are involved in some missions, so you have to choose wisely. The safest way is to kill somebody who has already played a role in a small quest of some sort. 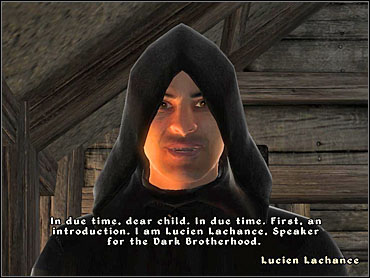 When you perform the murder, you'll see a message on screen saying that you deed has been "observed by the forces unknown". Next time you rest, you'll be approached by Lucien Lachance, who has a little proposal for you..

A Knife in the Dark

This mission will be given to you as a test. You have to kill a man named Rufio in Inn of the Ill Omen, south of Imperial City. It's as easy as it gets. The proprietor of the inn will tell you that Rufio is in the basement - use the trap door next to the entrance. Your victim is sleeping on his bed, and one hit is all he requires. Do so, and rent yourself a room in the inn. Lucien will appear and tell you that, well... you're in.

Head to Cheydinhal, towards a map marker. By the enchanted door, say "Sanguine, my brother", and talk to Ocheeva. Welcome to the family.

Welcome to the Family

Talk to the vampire Vicente Valtieri and accept your first mission. You have to kill the captain of Marie Elena, a ship stationing in Imperial City Waterfront.

Approach the crates at the end of the pier - a message will appear, asking if you want to hide in them. Do so, and once you're inside, sneak to the captain's cabin and kill Gaston Tussaud. Take the key from his body and open the booty chest. The rest of the crew noticed that something's wrong and is at the door. You can wait and fight them or escape through the window (using the captain's key once more).

Another mission from Vicente. This time you have to make the assassination look like an accident. Go to Bruma and break into Baenlin's house between 8 and 11 P.M. Hiding from the lord and his servant, go to the first floor and turn right. You'll find a barely visible Crawlspace Door in here. Use it and loosen the fastening. Sneak out of here and go back to the Sanctuary.

No Rest for the Wicked

You remember that Dunmer that mocked you at the very beginning of the game? Now it's time to pay him a little visit - Vicente will order you to kill him.

You'll have to traverse through some boring sewers. Just head towards the right map markers. When you reach The Sanctum, you'll have to sneak past some guards. Wait until they finish talking, and then overtake the one who's heading your way. If you're late, he'll stand in the place that makes him almost impossible to sneak by. In Imperial Subterrane there's only one guard, but fairly easy to avoid.

When you enter your old cell (ahh, memories), wait for the guard to finish talking to Valen. When he leaves, approach Dreth and kill him. The key to his cell and to the entrance door is on the table to the left. 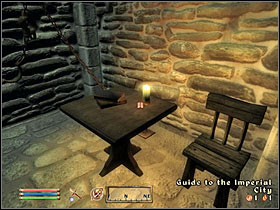 What's interesting, you don't have to leave the place using the sewers again. You can just leave through the front door, nobody will see anything suspicious in it.