Everything In it's Place

Talk to Kishashi - she won't trust you until you collect 5 plants from the farm that she's working on. When you do that, she'll give you a spoon. Take it to Ranarr-Jo and ask him about Cindanwe. He asks you to get rid of the farm's supervisor.

Speak with Cindanwe and ask her about her notebook. Raise her disposition and she'll give it to you. Break into her house and make some mess in there (throw around some items that lay on shelves, etc., you'll get a journal entry when you've messed up enough). Go back to Ranarr-Jo and tell him you've done your job. He gives you a Ring of Mind Shielding for getting rid of her, and a book (The Wolf Queen, v4 - +1 Mercantile) for retrieving the journal.

When you reach Vitharn on the southern outskirts of Dementia, you'll witness a battle between two groups of ghosts. Fight with the aggressive ones, and leave the others in peace. The front door is magically sealed, so get inside through the big tree (screenshot below).

Go through Vitharn Stump and Virtharn Reservoir, all the way to Vitharn Keep. You'll meet Count Cirion in there. He'll tell you what's going on in this place. You have to lift the curse from him and his men. 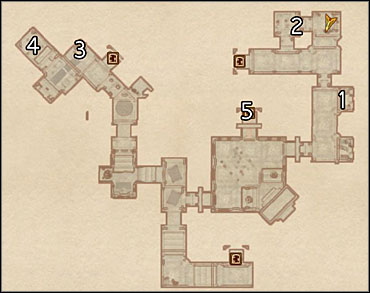 At (1) you'll find a doll - take it with you. A little bit further break into the armory (2) and take blue arrows that you see in there (watch out so that the blacksmith doesn't see you). Use the button (3) to open a secret room, where you'll find a blue dagger (4). Now go to Vitharn Bailey (5). 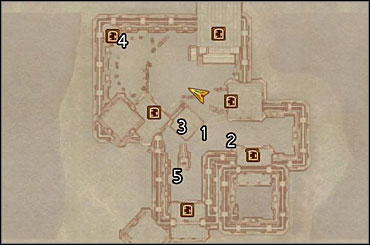 You can't interfere with the battle that you see - not directly, at least. Talk to Althel (3) and give him the arrows. Speak with Desideratus (2) and Hloval (1). Give the dagger to the mage. Go to Virthan Mausoleum (4) and throw the doll into the fire. Talk to Desideratus once again.

You've changed the fate of three of the defenders. Go back to Cirion. He'll give you his helmet and ask you to defeat the last invader who breaks through Vitharian lines (wait for him at (5)). Do, and the curse will finally be lifted. Your reward for this quest is the aforementioned helmet.

To Help a Hero

A Redguard named Pyke, member of the proud Knights of the Thorne, wants you to retrieve his stolen medallion from Grummites living in Fetid Grove. It's an easy dungeon to beat. Your target is on the second level, just follow the markers and you'll quickly be done. Your reward is a cool looking shield.

The village of Split has been magically divided, and all of its people separated into two beings - one Demented, one Manic. The southern part of the town is inhabited by the Demented, and the northern part - by the Manic. Talk to Harvir Break-Arms (doesn't matter which "version" of him you encounter) and he'll tell you to eliminate all the inhabitants of the opposite side. Just wait until nightfall and slay everyone in their homes. Watch out - if you kill the wrong "version" of any person, you'll fail the quest.

A woman named Mirili is conducting some research around the area of Highcross. Find her and offer your help. You'll get a list of items she needs (Mirili's List). It consists mostly of easy-to-find plants and enemy remains. When you bring back most of them to her, she'll give you another assignment: to bring her live animals. She needs a Baliwog, an Elytra, a Gnarl, and a Scalon (in that order). You can buy some powerful Charm spells to make it easier for yourself. When you complete her list, the quest will be over. And all you get for your trouble is a handful of money.

This quest is very tiresome and demanding, mostly because it's not shown in your journal. Yup, no lame map markers for you this time. Go to Deepwallow and talk to Erver Devani. He'll tell you about the Hill of Suicides (SI40). There are 5 cursed ghosts wandering around it. To lift the curse that's upon them, you have to find their skulls. Get ready for a real marathon through the Isles' caves and ruins.

When you collect all the skulls, go to Hill of Suicides and free the Ghosts by trying to talk to them. You'll get some serious Health bonuses, as well as a new spell - Risen Flesh. When you go back to Erven, he'll throw in some gold as well.