Turn around and take a Stone Lid from the stand.

Approach the curtain on the right side of the church and pull the rope. Use the Stone Lid on a Stone Sculpture to get a Lily Disc.

On the back side of the church there are 4 sculptured angels. You'll find matches under the one labeled "Faith". Go to the second curtain on the opposite side of the church and pull the rope again. Use the matches on a candle there and you'll be able to read the inscription. Go to the angel marked "Truth" - help Sophie up, and you'll get a Rose Disc.

Go back to the room from which you took the Stone Lid There's a chest in there, examine it and note the Marks on the Floor. You can now pull it to reveal a loose stone. There's a Daisy Disc under it.

In a drawer under the right altar there's a Ceiling Journal. It contains clues on how to place the three discs on the gate to the right.

Approach the gate and place 3 discs on it, using the screenshot below. Go down the stairs. 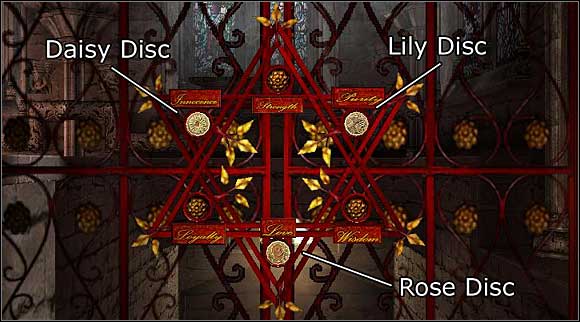 Read the inscription to the right and approach the globe. Turn it around to notice that it's missing a part. Head through the small corridor to find a Bleeding Angel statue. He's holding the missing part of the globe (Oddly Shaped Stone) - take it and place it on its right place to get a Star Disc.

Reach the end of the corridor with the Bleeding Angel. Place the Star Disc in the engraving on the floor and solve another jigsaw. Once again, start with the borders. 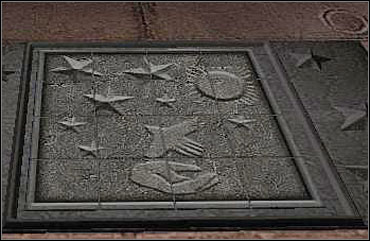 Move the Wicker Box and open the trapdoor. Go down.

In the corner of this room lies the last secret item in the game - Da Vinci's Codex Atlanticus. 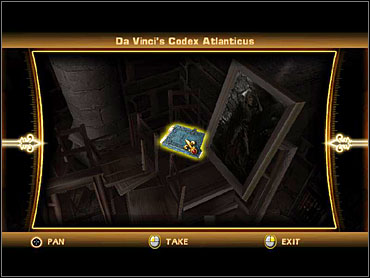 11. All that's left it to look around the room and examine all the details - newspaper fragments, sarcophagus on the floor, and murals on the walls. Great, you've solved the Da Vinci Code. Does it make you feel any good...?

This site is not associated with and/or endorsed by the 2K Games or The Collective. All logos and images are copyrighted by their respective owners.