Watch out, because one of the enemy units will appear directly in front of you. There are three ways to get rid of him - you can wait for him to turn around and surprise him, you can wait for him to start reloading his weapon and engage him in direct combat or you can drag the body of a nearby drone and kill him with drone's gun [#583]. Either way go to that new area once he's been eliminated. 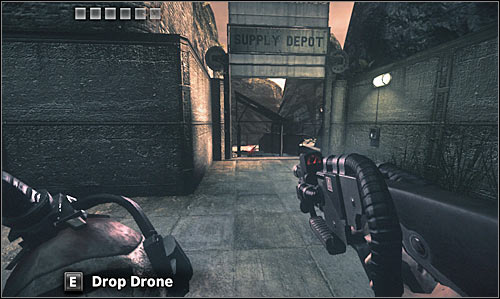 You'll soon get to a junction and I would recommend choosing a passageway located to your left. Watch out for a new guard. It would be a good idea to wait for him to turn around. Approach him quickly and use your blades to get rid of him. Once he's gone choose a narrow passageway next to the water [#584]. 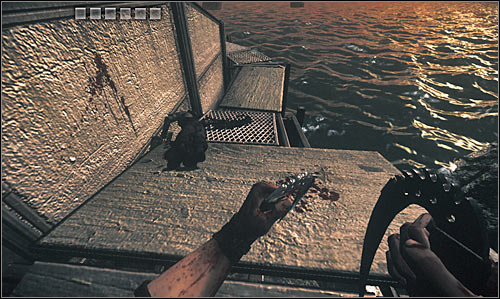 Eventually you'll get to a supply depot mentioned to you by Pavlo. Start off by going to your left. Approach one of the corners of the building and notice you'll have to make a small jump [#585]. Doing this will allow you to get your hands on a bounty card (Fravin Candown). Perform a second jump and locate a ladder. 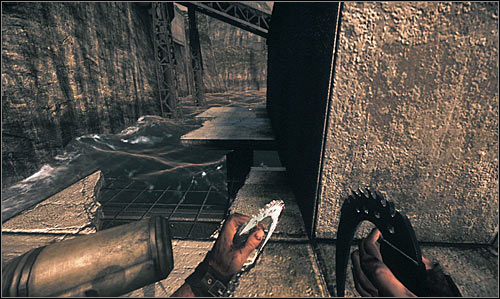 Don't use the hatch just yet. Instead find a small crate [#586]. Get on top of this crate and from there you should be able to reach an upper section of the roof. Collect yet another bounty card (Serth Yaltrow), go back down and open the hatch. Enter the ventilation tunnels in order to gain access to the inside of the building. 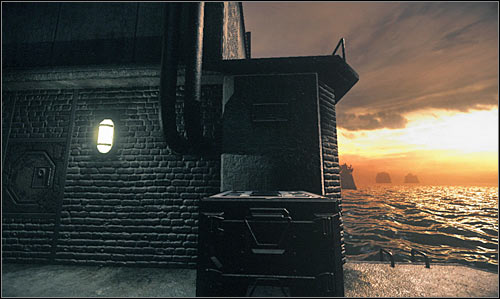 Drop down and you'll find yourself inside the supply depot. Heal Riddick using a NanoMED unit and pick up a gas mask. The most important reward you can take from this room is a SCAR rifle [#587]. It's a very unique weapon. You can fire special type of bullets by pressing the left mouse button. You can fire up to five bullets at a time and they will all stick to living or dead surfaces. Pressing the right mouse button will allow you to detonate the charges. Test this new toy on nearby crates and then on a wooden door in order to be able to leave the building. 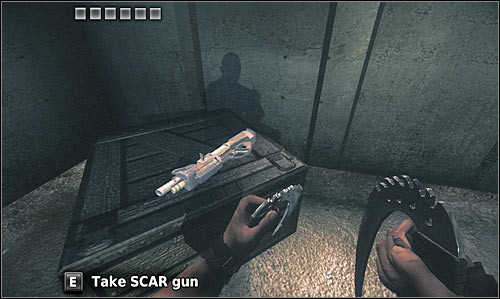 As you've probably suspected, you're going to have to defeat A LOT of enemy units while trying to return to Pavlo. Make a few steps forward and notice that a spider-bot has appeared in the area. Don't be fooled by the fact that this robot is rather small, because if you're noticed by it you'll die almost instantly. Get rid of the spider-bot [#588] using a well-placed charge and proceed to the passageway you've used before. 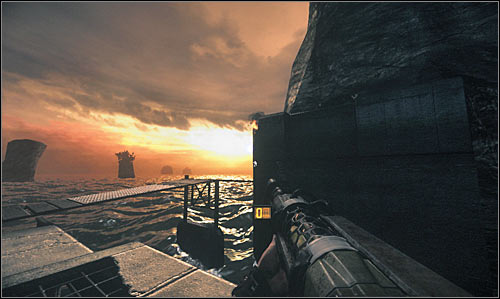 You're going to be attacked by a drone in the near future and two other enemies will appear when you get to the junction. Don't forget that bullets fired using the SCAR rifle can stick to the ground, so you can use them as mines. Make a few steps forward and get rid of the spider located to your right [#589]. I would recommend leaning out a lot, so you'll be safer from possible attacks. 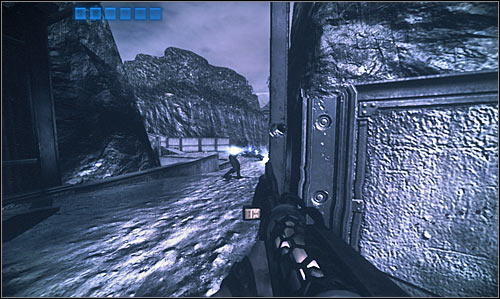 Choose the passageway located to your left, closer to the water. Press the crouch key and try surprising one of the enemy guards. Watch out for a new spider which will appear directly in front of you. Two other spider-bots can be found just around the corner [#590]. Eliminate both robots and proceed forward. Neutralize one more human opponent before he has a chance to surprise you. 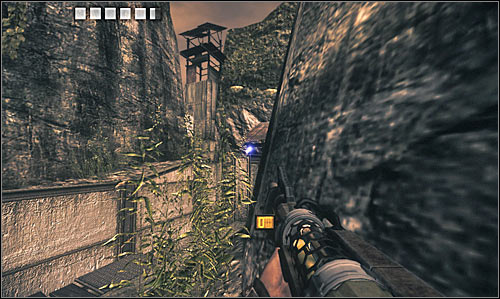