STAYING IN THE SHADOWS

The Chronicles of Riddick is a type of game where the best solution in most situations is to remain hidden. You will be allowed to perform open confrontations, however it will often increase the risk of Riddick losing his life. Acting stealth in both campaigns depends on two features of the game - identifying whether Riddick is fully hidden or not and using the Eyeshine feature. You can find out easily whether your character is safely hidden, because you'll notice that the screen has changed its colors to blue (screen). This will allow you to move around through guard infested areas unnoticed. Remember that you can't feel entirely safe in the shadows. For example you may be found by enemy units if they get too close or if they choose to use flashlights. The same goes with leaning out to both sides, however in most cases you won't leave cover when performing such action. 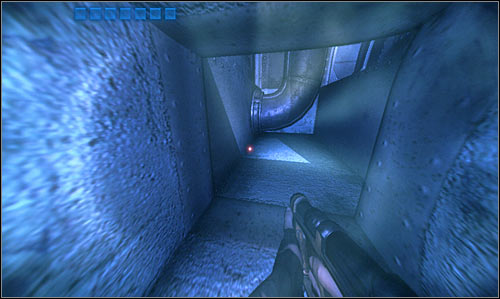 Using the Eyeshine ability has one purpose and that is to navigate easier through darker areas. Don't forget than you won't be able to use this feature in Escape from Butcher Bay campaign until Joe has helped Riddick in acquiring his powers. In Assault on Dark Athena Eyeshine is available right from the start. There's also one more thing you should remember about - don't use Eyeshine if you're going against enemies equipped with flashlights, because you may be blinded by a bright light, making it next to impossible to kill them before they open fire or sound the alarm. Staying in the shadows means that you must prevent enemy units from knowing that you're there. One of ways to do that is to hide bodies of all killed enemies (screen). This only applies to situations when you're going against humans, because drones from the second campaign won't respond to bodies of other people. The same goes with robots, aliens and mutants. 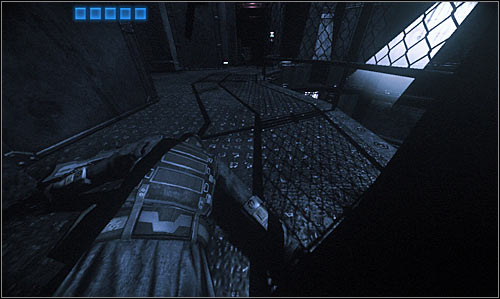 Are there any other advantages of staying in the shadows? One of the most important things is to be able to eliminate opponents silently, without their colleagues knowing they're missing. This can be done by performing two types of executions, triggered with a left or with a right mouse button. In Assault of Dark Athena you'll also be allowed to pick up drone's guns in order to use them against other foes (screen). It's a very interesting solution in the early stages of this campaign when you aren't carrying any real guns. 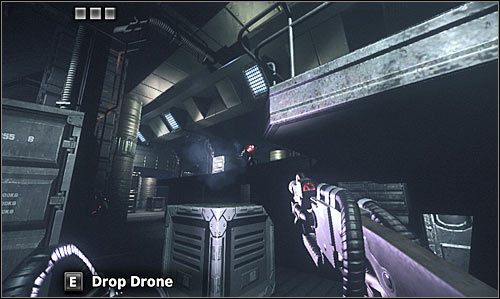 Melee combat can be divided into three main categories in The Chronicles of Riddick:

1) Executions - There are two types of executions in the game and I would strongly recommend performing slower versions of these moves. They'll take more of your time, but you won't have to worry about the dying opponent informing his colleagues that you've attacked him.

2) Fist fights - Remember that you can throw all kinds of punches, triggered by pressing different movement keys. Some of these features are covered in the main section of my guide. I would only like to remind you that you should be extremely careful while going after guards equipped with weapons.

3) Melee weapons duels - Some of the most useful melee weapons in both campaigns are the blades (Shiv in Escape from Butcher Bay and Ulaks in Assault on Dark Athena). Use melee weapons when you have the chance (screen) to increase your chances of winning. If you can't use the blades, consider switching to clubs and knives, but in most missions it won't be necessary. 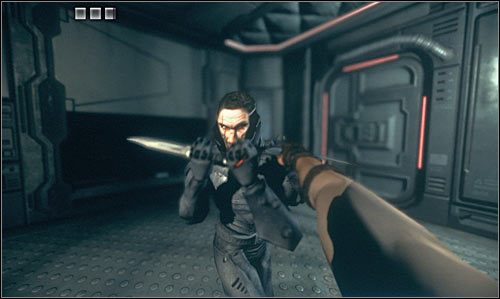 This is an issue mostly in the new campaign, because it relies in a bigger way on a standard combat rather than on hiding all the time. In Escape from Butcher Bay there are only a few levels where you'll be forced to use firearms, including going mutant and alien infested sections.

One of the best weapons in the game is a shotgun. You shouldn't have any problems finding enough ammunition and it's deadly at close range, even when you're going after large group of enemies. In Assault on Dark Athena a SCAR rifle is the most useful toy (screen). Firing explosive bullets can be used in many different ways, depending on how skilled you are and how you want to get rid of enemy units. 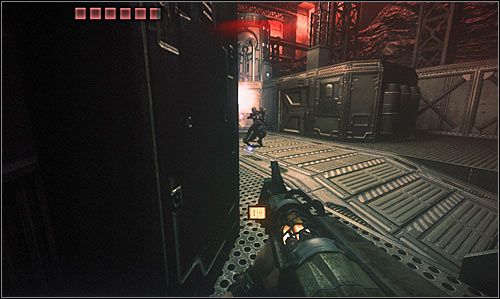 In both campaigns of The Chronicles of Riddick you'll be dealing with a very unusual health management system. Notice small squares in the upper left corner of the screen (they will appear only if you're in danger). You'll see only a few of those at the beginning of each campaign, but you'll be allowed to extend your life bar using special medical stations (screen). The idea is that if you lose an entire square you can't bring it back until you've visited a health station. If you lose only a portion of the square it would be a good idea to hide and you'll heal your injuries in a few seconds. Remember about this while trying to survive with not many health stations around or if you run out of cartridges needed to recharge them. 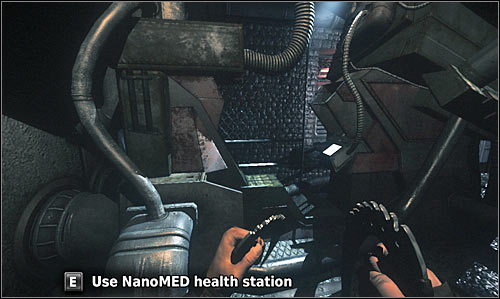 Here's a list of melee weapons and firearms you may find during different stages of both campaigns. I would like to add that some of these toys are exclusive for a certain campaign and there are also objects that appear in both scenarios.