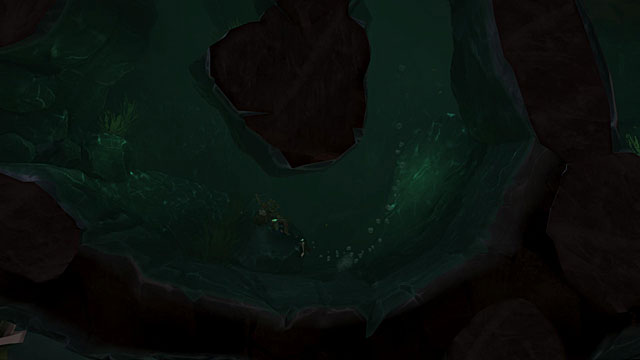 The hillbilly's special skill let you hold your breath. Use it and dive. Keep swimming left, remembering to use it from time to time. 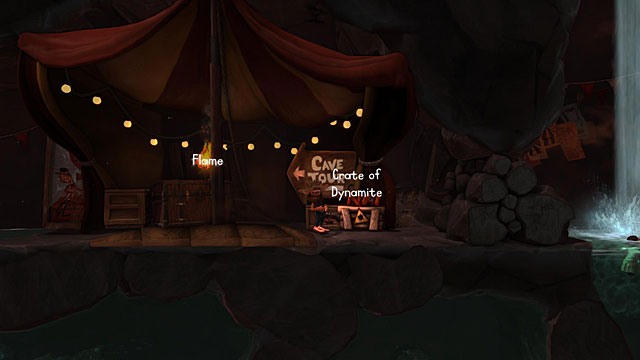 Head out of the water and take a stick of dynamite from the Crate of Dynamite. Light it using the Flame and throw by the pile of rocks on the right. The explosion will open a passage for other characters. Head to the left and go down the ladder to the carnival. 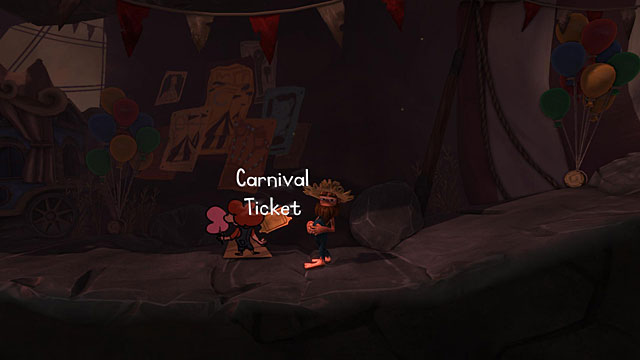 In order to obtain the Pink Bear, you will need five Carnival Tickets. One of them can be found to the left of the machine. 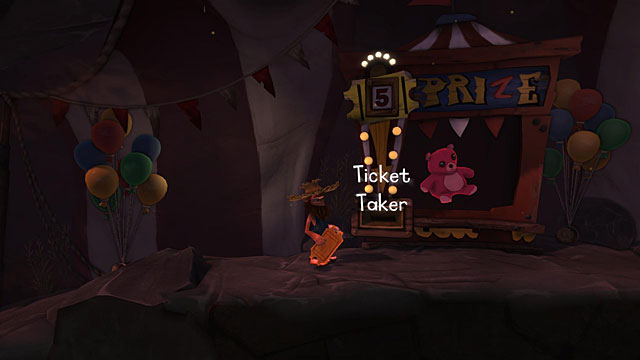 Approach the Ticket Taker with the bear inside and give it one ticket. That leave four remaining. 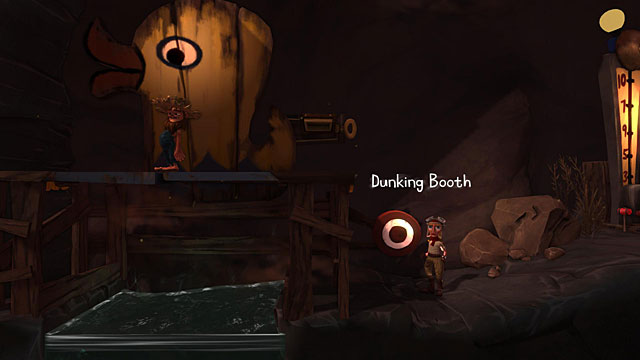 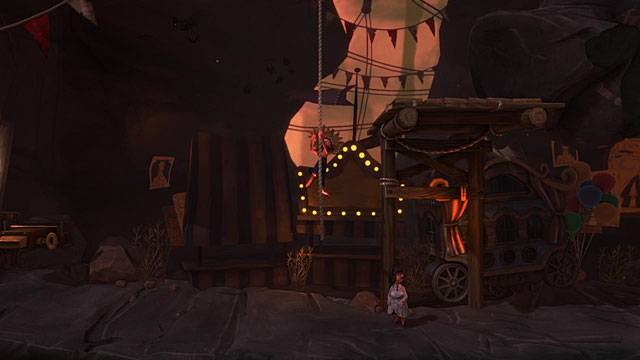 Climb one of the ropes to nearly the very top... 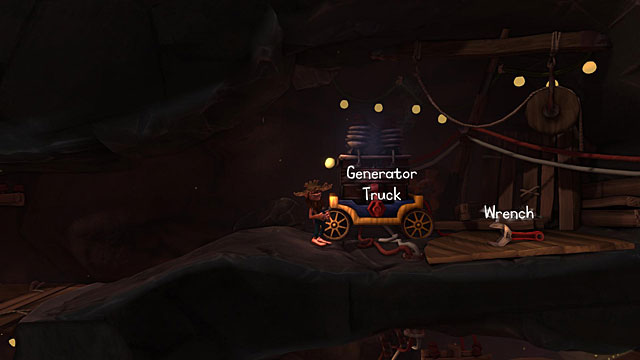 ...and find the Generator Truck. Beside it there should be a Wrench. Pick it up and switch to a different character. 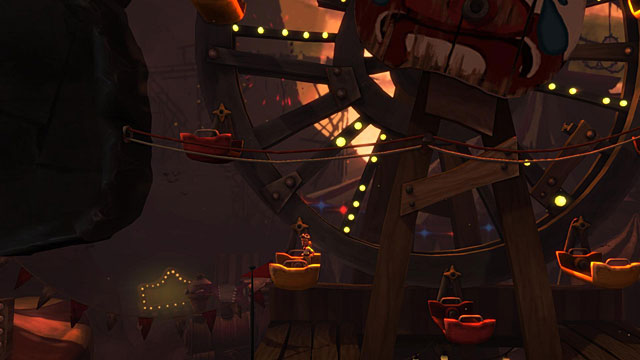 Climb higher towards the ferry wheel and jump into one of the cars. 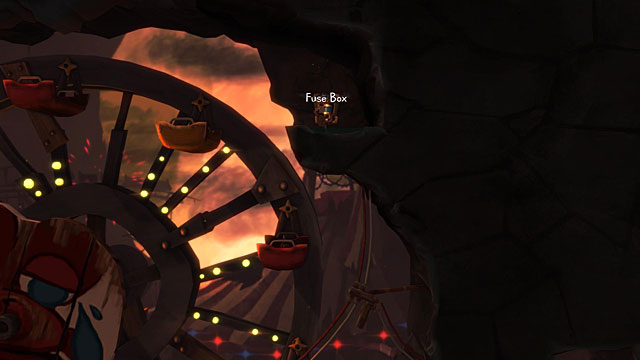 Jump off onto the rock ledge with a Fuse Box, but don't take out the fuse just yet. 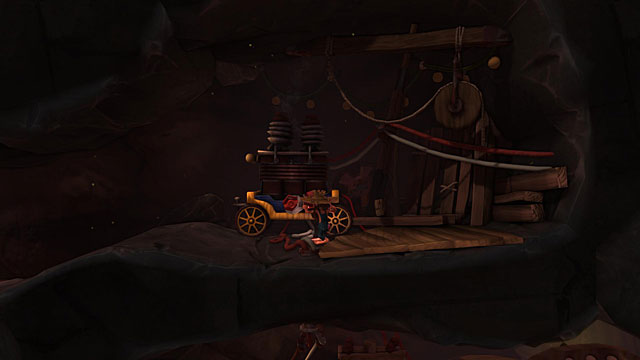 Switch to the hillbilly and use the wrench to turn the bolt in the generator. Return to the previous character, pull out the fuse and jump down along the ferry wheel's cars. 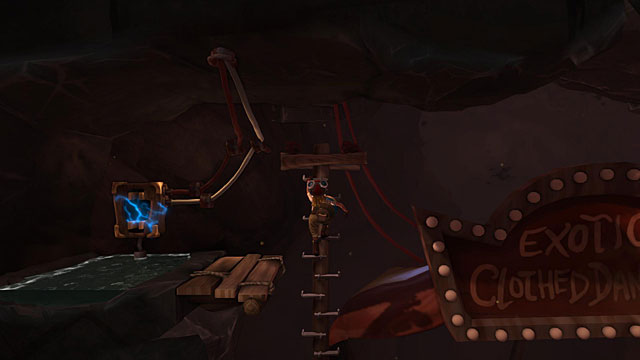 Run left and climb the ladder to the Empty Fuse Box. Don't get off the ladder and switch to the hillbilly to once again turn the bolt in the generator. Switch again and put the fuse into the box. Go down the ladder and take the Sledgehammer. 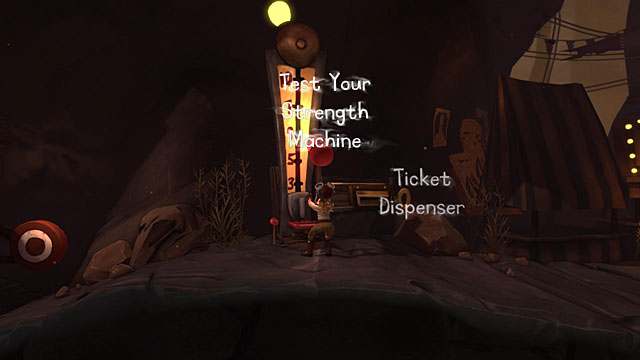 Head down with the sledgehammer in hand and use it to hit the Test Your Strength Machine. Another ticket will fall out of it, so take it to the bear machine. Only two more to go. 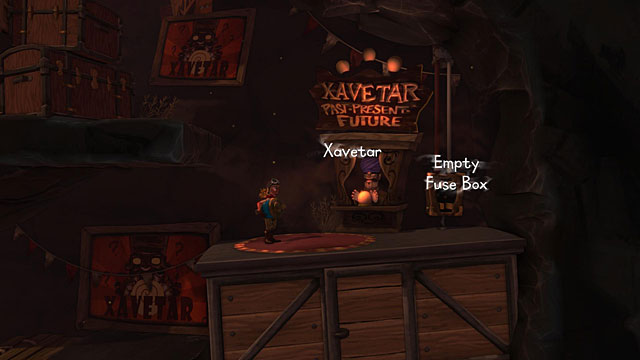 Head back to the ferry wheel to take back the fuse. Before taking it out, switch to the hillbilly and turn the bolt in the generator. With the fuse, head right to Xavetar who call tell you the past, present and future. Place the fuse in the Empty Fuse Box. 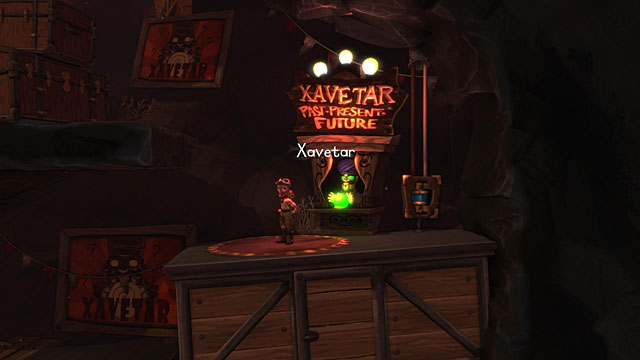 Talk to Xavetar and remember the colour which the crystal ball will take. 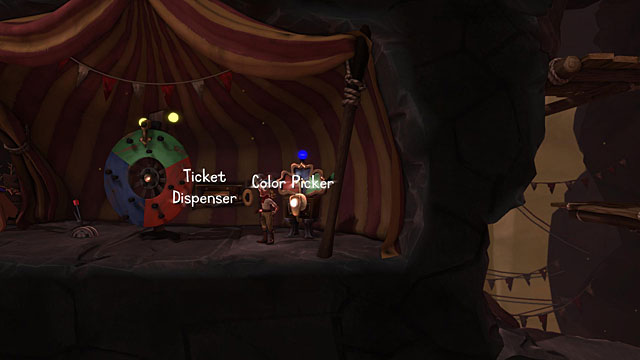 In the left part of the complex you will find the Wheel of Misfortune. Set the colour from the crystal ball on the Color Picker and pull the Lever. After winning, take the ticket and throw in into the ticket taker. Only one more ticket left. 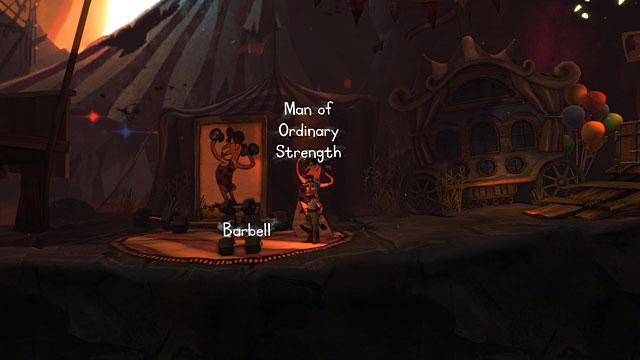 Head to the ferry wheel. To the right of it there's the Man of Ordinary Strength and a Barbell beside it. Pick it up and go below, to the magician. 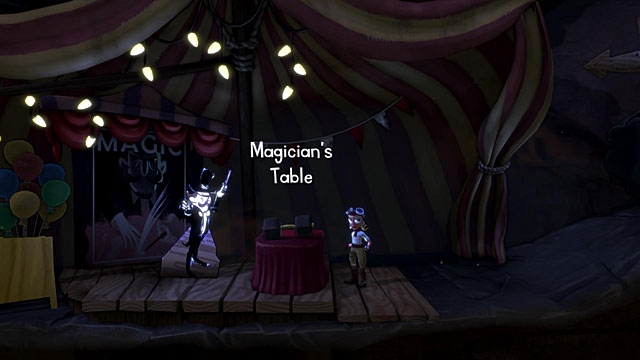 Place the barbell on the Magician's Table when there's nothing going on. The magician will make the barbell invisible. Take it. 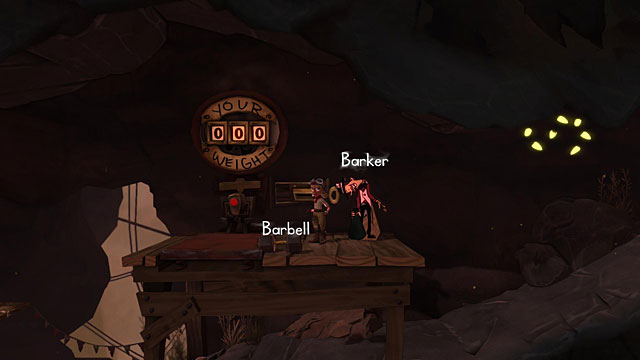 Nearby there's a weight and a man who can guess how much you weight. Step onto the machine and thanks to the barbell that you're holding the man will make a mistake, causing a ticket to fall out. Take it to the machine with the bear. The hillbilly will automatically take it. 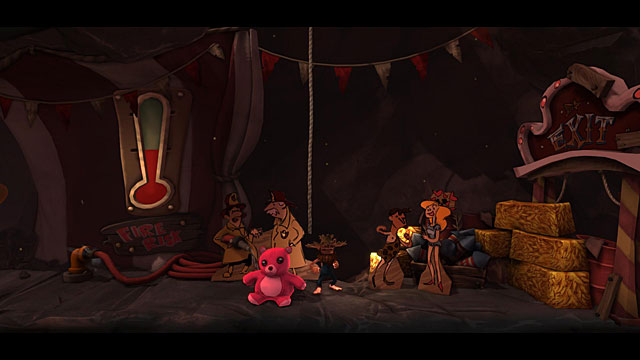 It however looks like that the lady is already taken. 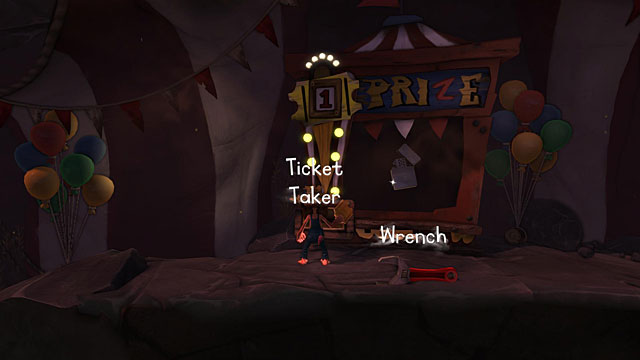 To the left of the bear machine, inside which a Lighter has now appeared, there's another ticket. Take it and put it into the machine to obtain the lighter. Trying to set fire to the hay bales behind the woman won't have an effect, as the firemen will extinguish the fire immediately. 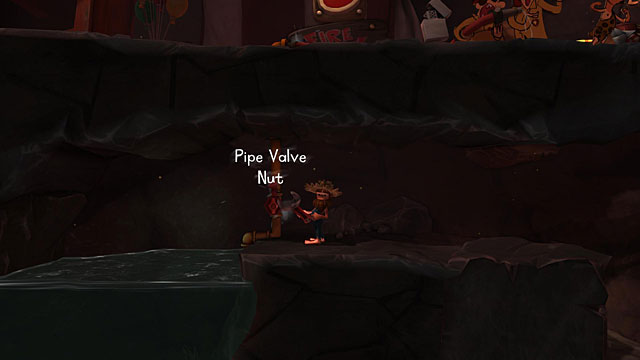 Take the Wrench which you previously used to turn the bolt in the generator and stand on the trapdoor above the water (you've already done that to obtain one of the tickets). Have another character hit the wheel to make the hillbilly fall into the water. Swim below and to the right while using your special skill every couple seconds. Get out of the water and turn the Pipe Valve Nut, therefore cutting off the water. 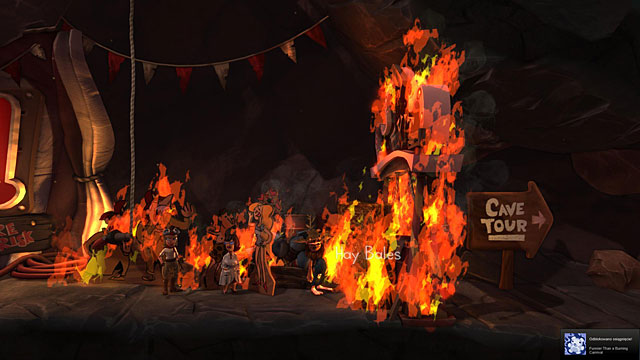 Return to the upper level, take the lighter and set fire to the Hay Bales. Run to the left as far as possible, afterwards head back and the path should be clear.