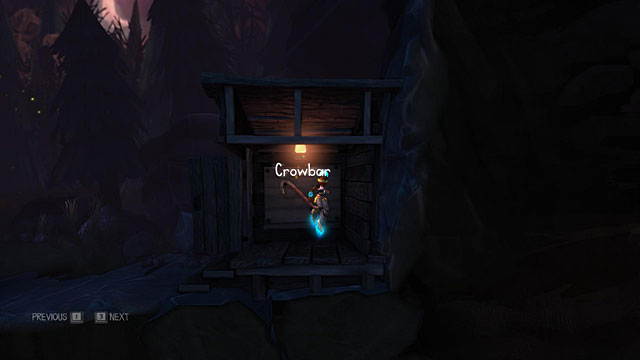 Choose your characters, head to the left and take the Crowbar from the wall. 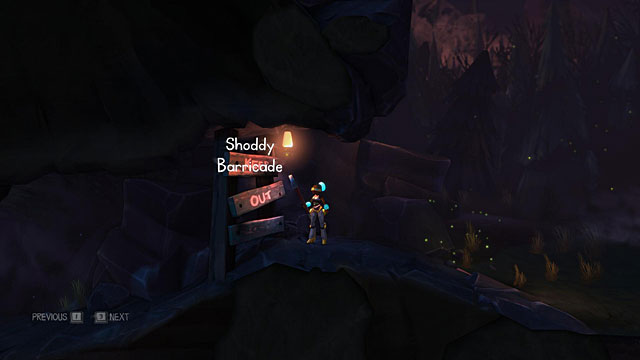 With the crowbar, head right and use it three times on the boards which are blocking the path to the cave (Shoddy Barricade). 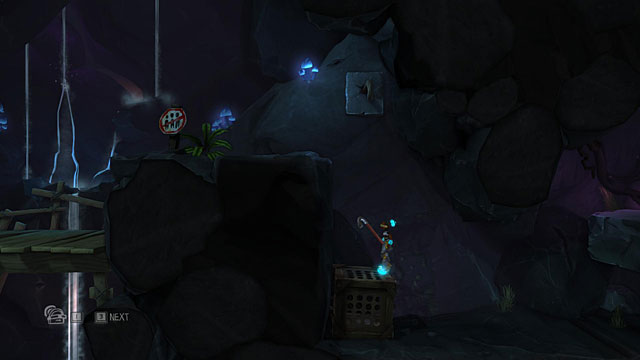 Keep going left and down until you reach a place that you can't jump to. Back up a little and push the chest to the below the ledge. Use it to get above and head onto the bridge. now switch to any other character and do the same with it. 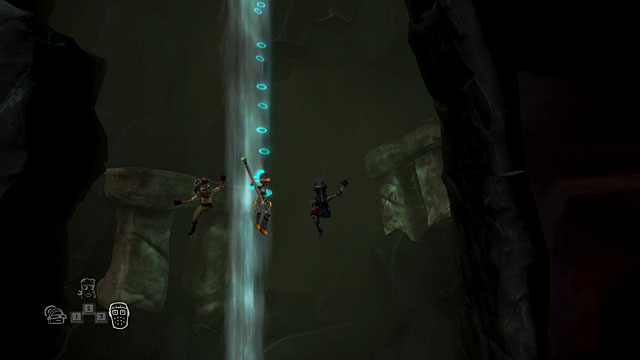 After getting to the bridge with the second character, switch to the third one and head there as well to cause the bridge to crumble under the weight of the three characters. Remember to have the crowbar with you. 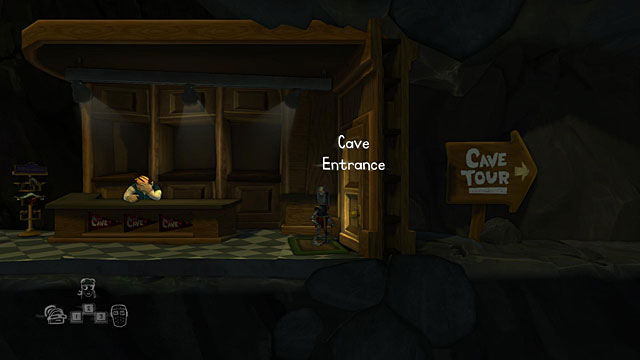 After landing in a small puddle, head out of it with any character and go right. The path to the cave is blocked by a locked door (Cave Entrance). Speak with the Gift Shop Clerk and head left. 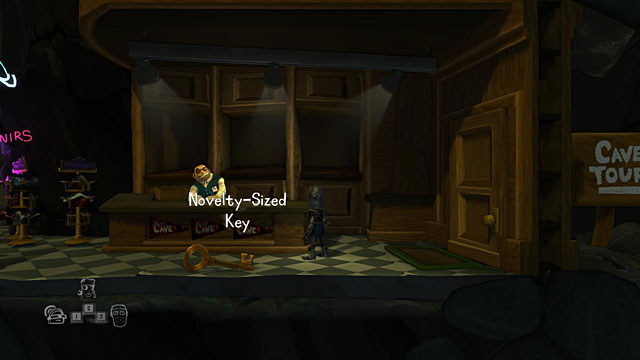 You will be stopped by the clerk, who will give you the Novelty-Sized Key and ask you to bring the artefacts belonging to three other adventurers from there. 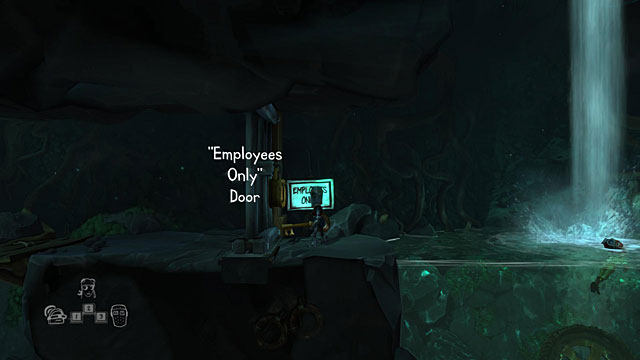 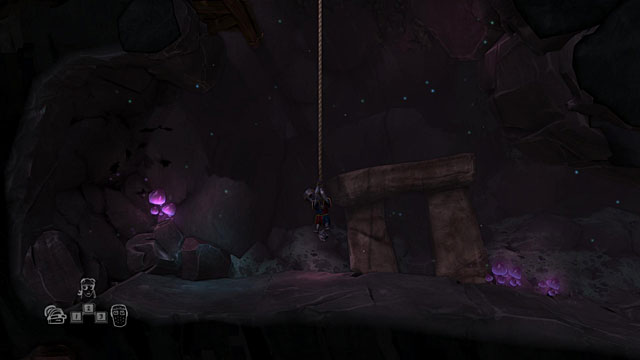 You don't need to switch to other characters, just lower yourself on the rope and run right and they will appear right beside you. 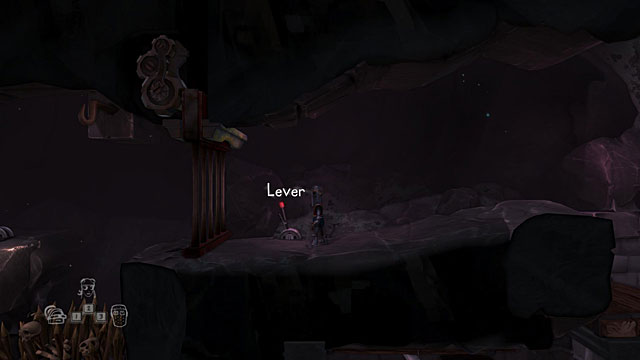 In the corridor you will find three levers. With one character, hold the one by the locked gate... 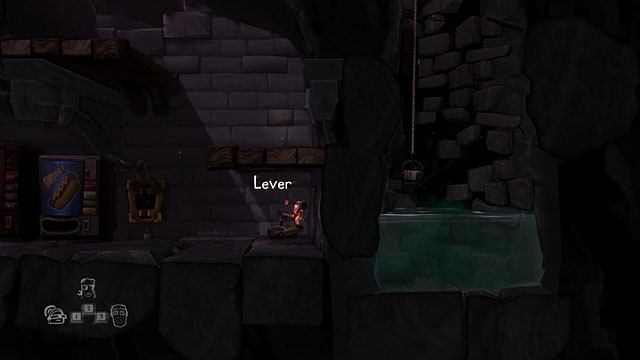 And with the second character, head below to hold the lever by the deactivated vending machines. 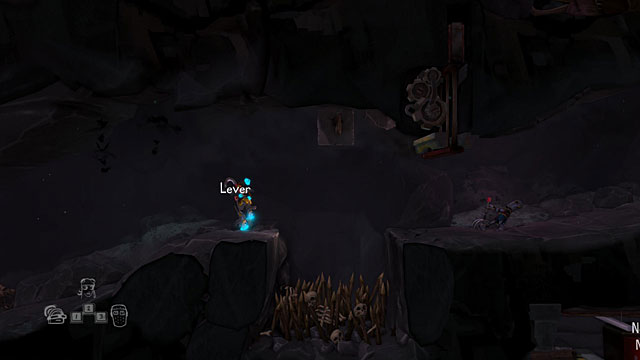 With the third, head through the raised gate on the other side of the pit. That way you will unlock the passage. 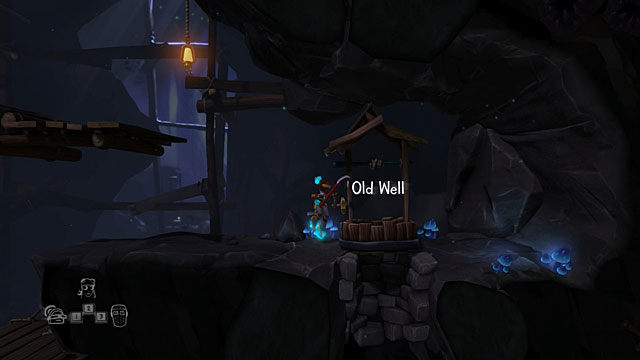 Choose the character with the crowbar, go left and climb up. You should find the Old Well, on which you have to use the crowbar. 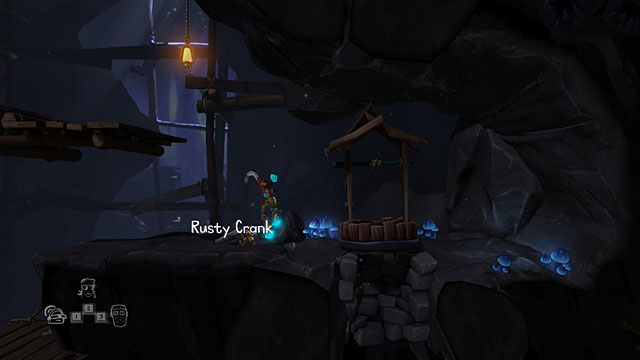 The Rusty Crank should fall off the well. Take it and go through the gate to the right side of the level. 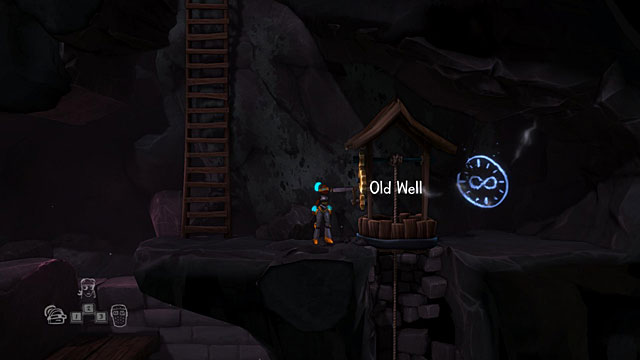 Use the crank on the second Old Well to destroy it and cause a Bucket to appear by the ladder on the left. 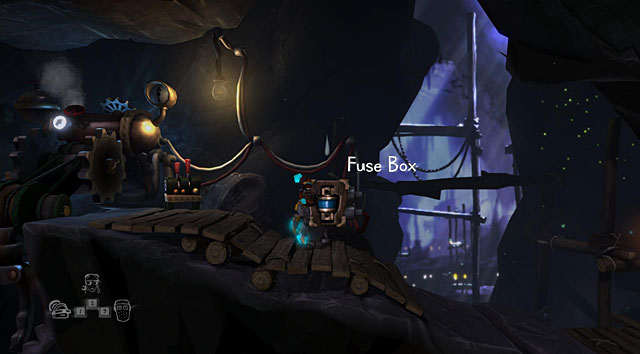 Take the bucket, head back to the left side of the level and head up to the place where the large machine with claws is. To the right of it there's a Fuse Box onto which water is dripping. Place the bucket on the crate and take the Fuse. 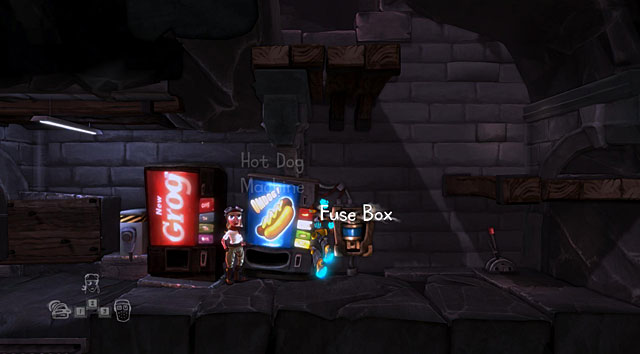 Return to the Grog and hot dog vending machines and place the fuse into the Empty Fuse Box. Use the Hot Dog Machine, pick up the Hot Dog and head back up and to the left, towards the Bell. 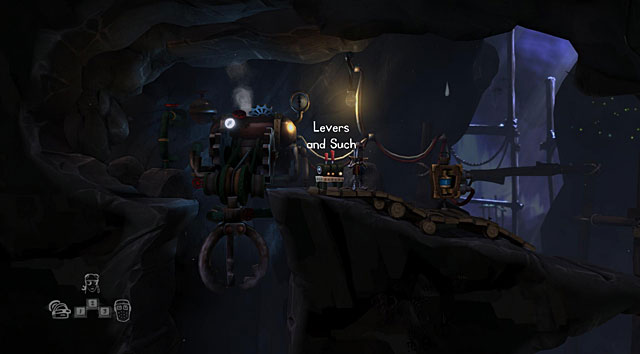 With another character, take out the fuse by the vending machines and take it back to the first fuse box. Approach the Levers and Such. 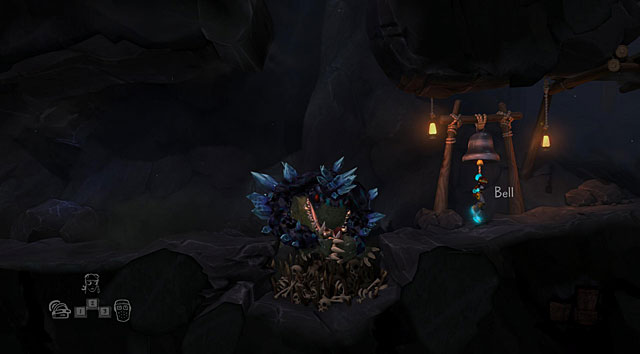 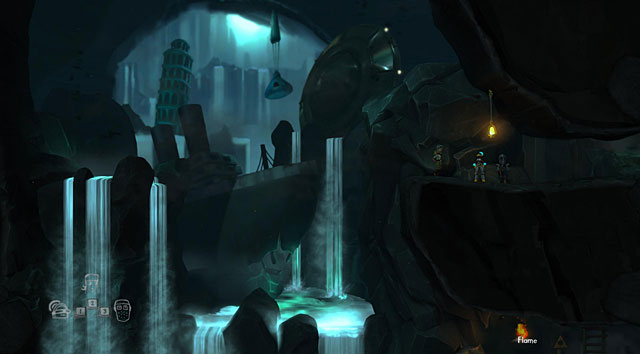 After unblocking the path, head to the left and jump off the ledge. 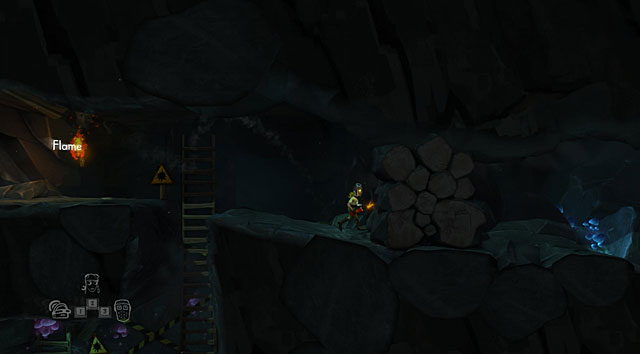 Get out of the water and move right. Go down the ladders and pick up the Box of Dynamite. Head back above, light the dynamite from the Flame on the wall and quickly drop it by the rocks which are blocking the further path. 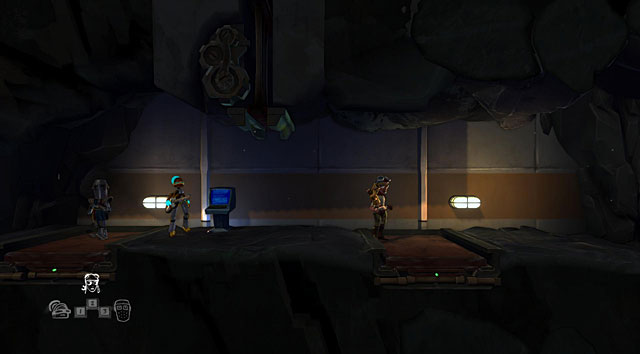 Find the two artefacts in this area (the Thespianship Award and the Cursed Guitar) - one character can hold onto one of them. The further path is blocked by steel bars. Stand on the pressure plate found to the right of the blocked passage with one character, head through the passage with the second and stand on the plate on the right. Afterwards get there with the two others who were left behind. Take the third artefact (Jewelled Skull) and move to the right. 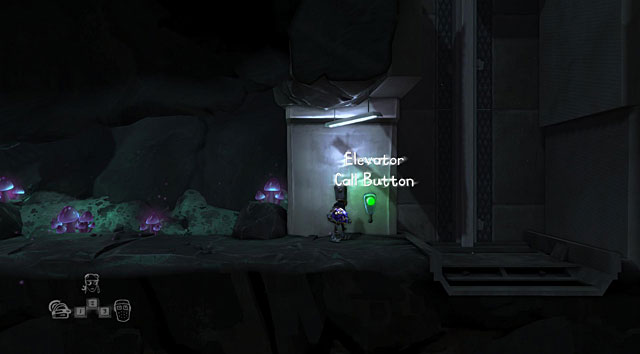 Use the Elevator Call Button, head onto it with all your characters and press the button again. Now return to the clerk and give him all three artefacts. Speak to him again and he will open the door for you. 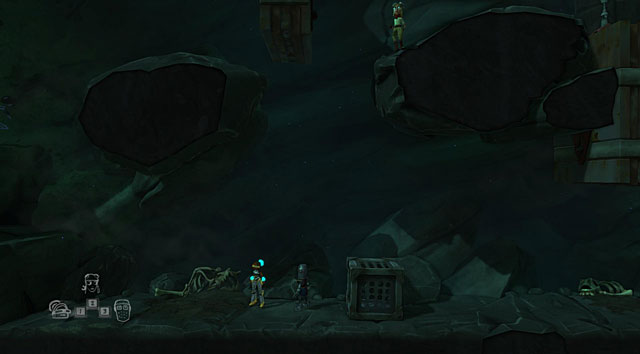 Head through the door, jump off the ledge and head left. You should see a big weight hanging from a rope. Jump onto the rope with one of the characters, head to the left with the others, below the weight. Get off the rope with the first one and a passage will be opened below. Switch back to someone below and push the chest to the left so that the first character can jump down onto it without hurting itself. 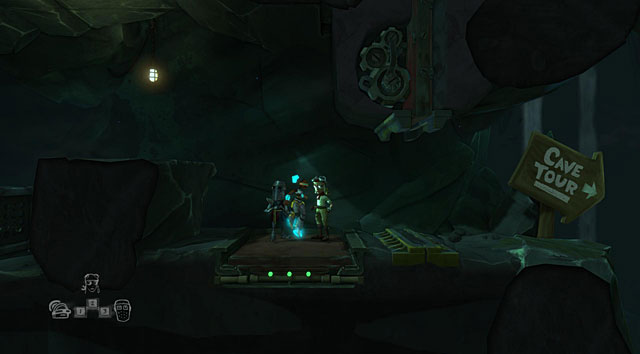 Head with all three characters to the right and stand on the platform. Three lights will turn on and the passage will be opened.