This unofficial guide to The Banner Saga consists primarily of a very detailed walkthrough of the singleplayer mode. The solution focuses mainly on presenting all battles fought by main characters (also optional ones) and tracing their conversations for possible behavior variants and consequences of their decisions. Each decision is described and explained in detail, which should help you to make the right choice.

First part of this guide describes in detail both basic and advanced mechanisms of turn-based fights and also addresses the issues of management of the caravan and taking care of playable characters. You'll also learn how to develop available heroes, which skills are most useful and how to choose proper equipment. Thanks to this information you'll have no problem to deal with encountered problems and no enemy will be a challenge for you. The guide is completed by a list of available achievements which can be unlocked via Steam service.

The Banner Saga is a debut project of independent development studio named Stoic, founded by people who formerly worked at Star Wars: The Old Republic. This is RPG game distinguished by extensive turn-based fighting system and story plot set in Norse mythology. During the gameplay you are following a group of Vikings exploring the world, where gods were killed in unspecified circumstances.

About The Banner Saga Game Guide 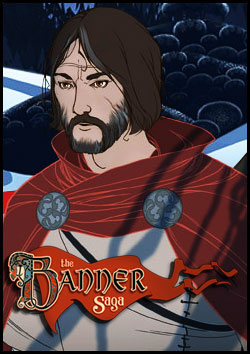 WHAT IS THE BANNER SAGA?
The Banner Saga is an epic role-playing game inspired by Viking legend. Hand-painted landscapes portray a world eerily suspended in perpetual twilight. Cities and towns begin to crumble into chaos. Heroes abandon their hearths and homes to traverse the snowy countryside, gaining allies along the way to help battle a strange, new threat.

Decisions have consequences; wise choices must be made when conversing with possible allies during intricately crafted dialogues. Turn-based strategy brings tactical challenge in hand-animated battle sequences. With visuals evocative of the golden age of animation, The Banner Saga brings skillfully crafted art, story and strategy to gamers waiting to re-experience classic adventures and tactics.

Player choice that drives your narrative Every decision you make in travel, conversation and combat has a meaningful effect on the outcome as your story unfolds.
Over 25 playable characters from 2 different races, human and Varl (horned giants) Embark on your epic journey with a variety of characters from 7 different classes, each with unique abilities and upgrade options to fit your play style.
Strategic combat with consequences Victory or defeat and even the permanent loss of a character depends on which characters you choose to take into battle and what tactics you employ while in combat.
The journey is half the battle Your role in building and managing your caravan as you travel the vast frozen landscape is critical to not only your own survival but the survival of an entire civilization.
An epic Viking saga brought to life in 2D glory Beautifully hand drawn combat sequences and animations, accompanied by an evocative score from Grammy-nominated composer Austin Wintory, will immerse you into a fantasy realm based on Norse mythology.
Multiplayer Combat Enhanced Sharpen your combat skills in the free to play “Factions” multiplayer game. As you play through the single player experience you’ll also unlock new characters to use in multiplayer.

More About The Banner Saga

As hacknslash constitutes one extremity of the RPG genre, its other side are the tactical RPGs, emphasizing complex, strategic battles played in turns. Here's a ranking of the 25 best tactical RPGs, according to our staff.