Our guide to The Surge will help any player complete this rather challenging game in 100%. The most important part of this guide is the walkthrough. Besides it, we have also included descriptions of all locations. Our walkthrough contains information on how to reach each of the areas, solve puzzles, deal with regular enemies, and defeat bosses. All the boss fights were described in a separate chapter.

Our guide to The Surge also contains basic tips about combat, character development system and crafting. Some of these mechanics aren't described well enough in the game which can lead to some problems. We have also prepared separate chapters dedicated to equipment management or ways of eliminating various enemies. The guide also includes an FAQ chapter where you can find answers to various questions regarding the game. Read that chapter to learn how to get schematics and weapons, how to get tech scrap easily or how to get the best armor in the game.

Our guide will also help you find the secrets of The Surge. We have listed the locations of all audio logs, comic books, and secret weapons. We have also included a full trophy/achievement guide, information about the controls and system requirements.

The Surge takes place in a post-apocalyptic world controlled by machines. The protagonist faces robots and modified humans. He has access to an exoskeleton and items that can be obtained in the game world or crafted from the resources. Character development is limited and mostly focuses on modifying and upgrading the exoskeleton with better energy parameters and implants. The combat in The Surge isn't easy, which greatly improves the difficulty of the game, but it is advanced enough for the player to find their own style and perfect it.

How to die less in The Surge?

The Surge is a challenging game - a brief distraction or wrong reaction can lead to your character's death. Below you can find a few tips that will increase your chances of survival:

More information about the combat system on the following pages:

All main locations in The Surge

Our guide to The Surge contains full walkthrough with descriptions of all the locations available in the game. The list below has information about the areas:

I can't defeat a boss

Some of the bosses in The Surge can be troublesome. The Bosses chapter contains detailed descriptions of all the main bosses encountered during in the game. They are listed below:

Secrets in The Surge

In The Surge, you can take a break from fights and look for various secrets. The Audiologs and comics chapter has the list of all the collectibles. The main categories are:

I have a question and I'm looking for answers

Some of the gameplay mechanics in The Surge aren't easy to understand. The FAQ chapter contains answers to various questions and problems.

Your character's equipment consists of a few different elements. Their detailed descriptions can be found in the Equipment chapter. The main categories are:

Does the PS+ version give you full access to the game?

On April 2019, The Surge has been made free for all PS4 users who are subscribed to PlayStation +. This version gives you access to:

The DLCs listed above must be purchased separately.

The PS+ version offers a platinum trophy. "The Good, the Bad and the Augmented" and "A Walk in the Park" paid DLCs have their own trophies. Luckily, you don't need them to get the platinum trophy in the original game.

Important controls in The Surge

The full list of the controls is on Controls page. Below you can find the most important buttons in The Surge.

About The Surge Game Guide 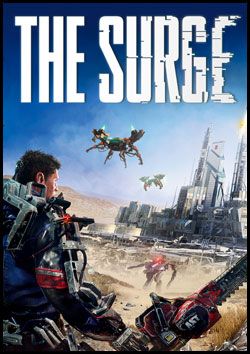 The Surge is an action RPG set in dark science-fiction world. The game takes us 60-70 years in the future, to an age after humanity’s technology has turned against it, bringing ruin to the entire planet. With the advancement of machines, most of the jobs up to now performed by humans became unnecessary. Those who survived were forced to leave the overpopulated towns and head for rural areas looking for work.

This post-apocalyptic world is home to artificially modified humans as well as some more inhuman inhabitants. Although most humans use popular exoskeletons, created to boost effectiveness and abilities of people. Thus, we don’t play as soldier, but rather an ordinary human in possession of customizable exoskeleton.

The game’s world is shown from third-person perspective. Thanks to the employment of modern technology and the aforementioned exoskeletons, the fights are more dynamic than in competing titles. One of the features that sets The Surge apart from competition is its unique and very extensive crafting and upgrade system, which is deeply connected to fighting.

More About The Surge

Why should we spend a dozen hours carefully developing characters and exploring the nuances of an RPGs combat system, if a basement rat poses the exact same challenge at the beginning of the game and at the end? This site is not associated with and/or endorsed by the Focus Home Interactive or Deck13 Interactive. All logos and images are copyrighted by their respective owners.