The following game guide to The Surge 2 contains a set of valuable information and news concerning this title. On the following pages of our guide you will find info about features related with this game. From here you will learn about the process of creating a character.

After the official release of The Surge 2 this guide will be enriched with main story walkthrough and additional tips related to main game mechanics.

Brief information about The Surge 2

The Surge 2 is the second installment of the series, which launched in 2017. The production was developed by the authors of the original game, the Deck 13 studio.

The Surge 2 will throw you into a world where machines have turned against people due to a mysterious virus. The action of the game takes place in the city of Jericho, where the main character's plane crashes. A few weeks later, he wakes up in a ruined prison and quickly notices that the metropolis is in total chaos. City streets are raging with rebellious robots which forced the army to declare a state of war. Such events have left ordinary citizens on their own, and as if it wasn't enough, a powerful storm has just started in the area.

On which platforms the Surge 2 will be available?

The Surge 2 will hit PCs, PlayStation 4 and Xbox One consoles. All these versions will be available for sale on the same day.

The Surge 2, in addition to the standard version containing only one copy of the game, will also be available in the following editions: 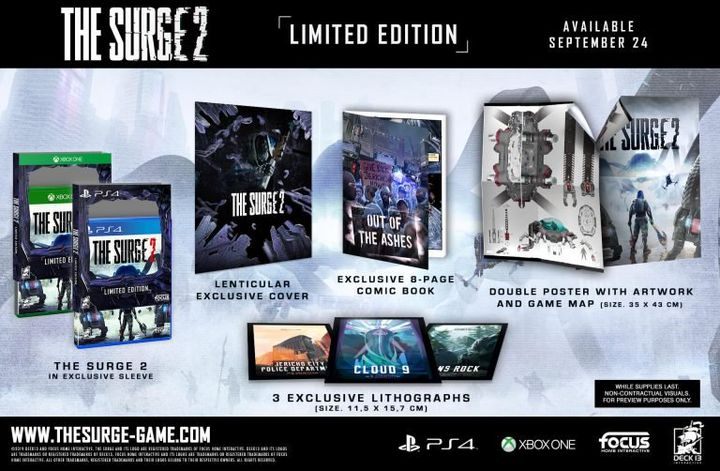 In addition to a copy of the game, this edition includes a special three-dimensional cover, an 8-page comic book, a two-sided poster and 3 lithographs measuring 11.5 x 15.7 cm. 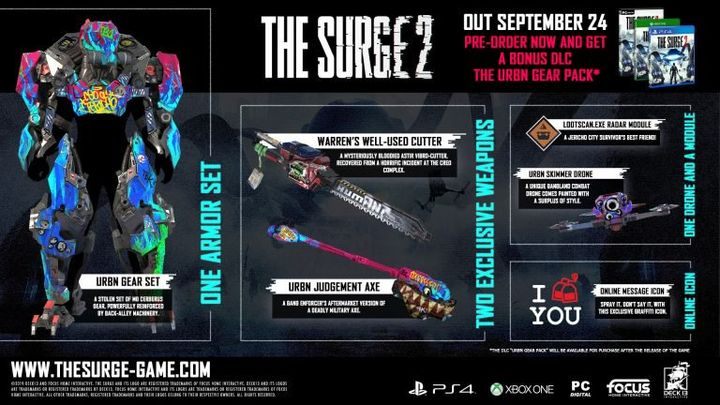 About The Surge 2 Guide

More About The Surge 2

This site is not associated with and/or endorsed by the Focus Home Interactive or Deck13 Interactive. All logos and images are copyrighted by their respective owners.