This page of the Stanley Parable: Ultra Deluxe guide will walk you through all of the endings related to the left door. Most (but not all) of these endings were already present in the base game. We've also included endings which can be obtained even before the new content is "officially" unlocked.

Once the game starts, you'll be able to head to the office. Let the narrator guide you through the corridor until you reach the door. 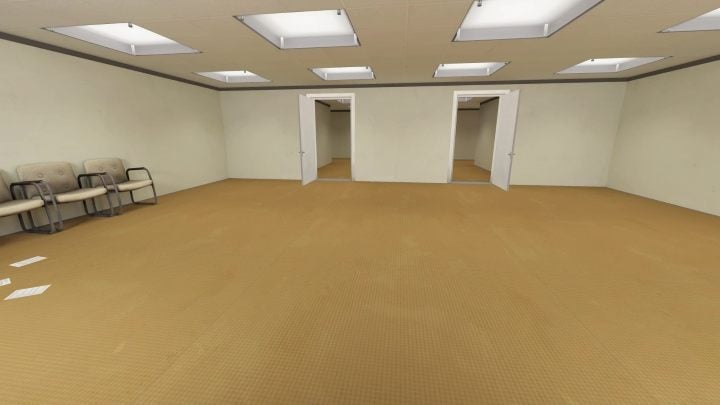 The choice of door is critical.

You can obtain the following endings by going through the left door.

To get this ending, simply listen to the narrator's instructions.

Select the left door when faced with the choice. Then cut through the conference room and head up the stairwell. 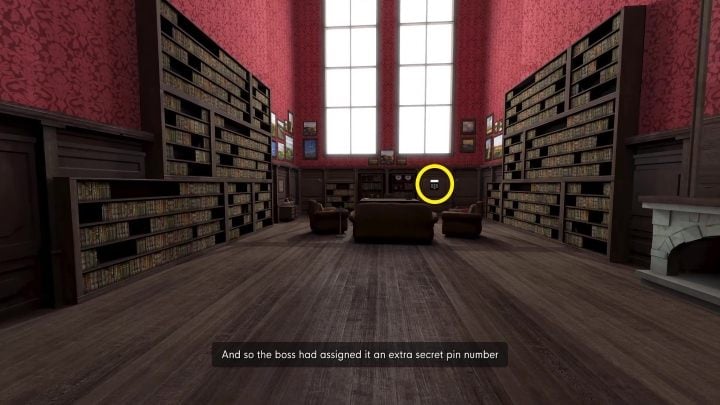 Next, go into the boss's office and enter code 2845 on the panel on the opposite side of the room.

A secret passage will appear before you. Go through it and take the elevator downstairs. Walk through the hallways and walk under the large MIND CONTROL FACILITY sign (don't turn left). 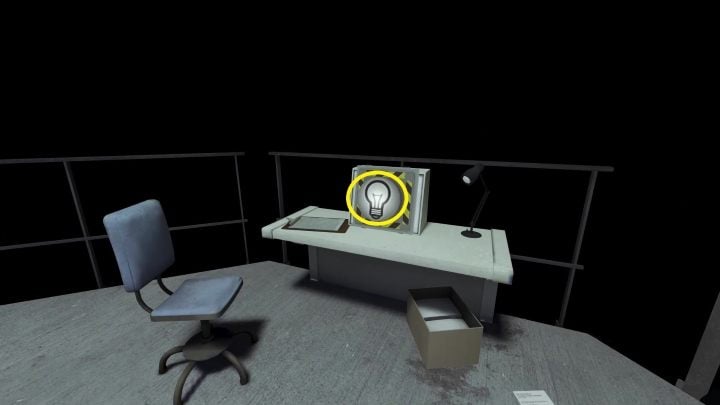 Press the button visible on the platform. Go to the next structure and do the same there. Move from place to place by pressing the buttons until you unlock the elevator. Ride it to the top. 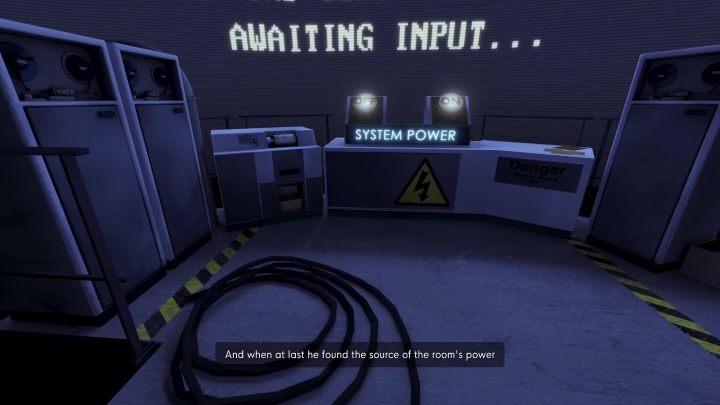 Walk through the large office and enter the room on the other side of it. There you will be faced with a choice - turn the machinery on or off. Listen to the narrator and deactivate the mechanism.

To get this ending, follow the same steps as in the Freedom ending, but instead opt to turn on the machinery as your final choice.

This will begin the countdown to the explosion of the facility. In the room you walked through, a light will turn on. You will find there many interactive buttons, giving you a chance to be rescued. However, your fate is sealed, and you won't find the help you're looking for. When the time's up, the game will restart.

In this ending, you need to follow the narrator's instructions until you enter the mind control facility. 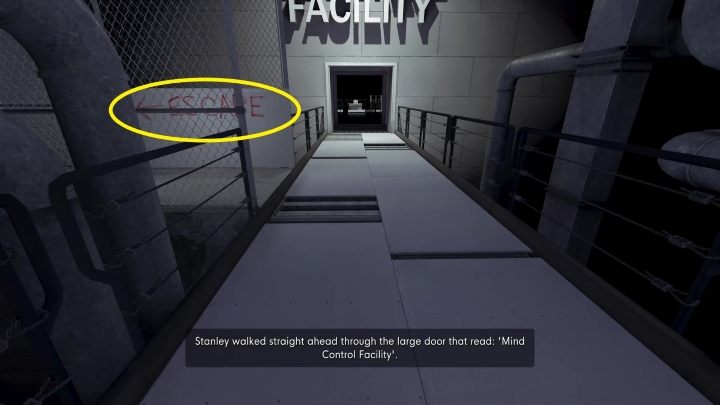 Before you head inside, turn left as indicated by the red "escape" sign. Continue down the corridor and then jump down.

Wait out the sequence that follows, then head down the path. First, you'll notice a sign with the game's title and then a passage. Enter it. You will end up in a museum. 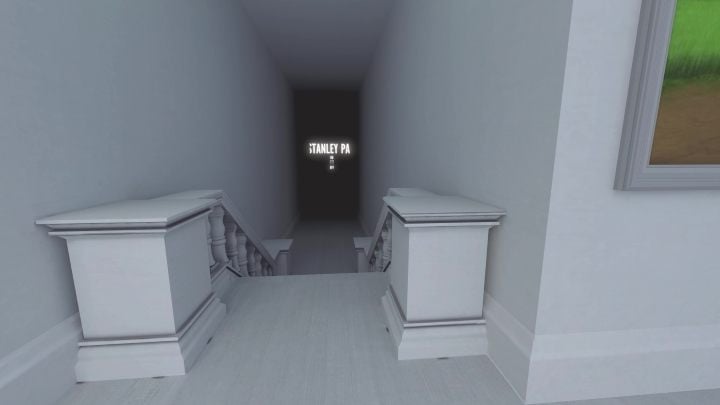 You can explore it at your own pace. Here you will find various interesting facts about the game. If you get bored of looking at the exhibits, simply use the passage (located in the room with the elevator model) to head into the darkness and then press the button.

You have two options now: yield to fate and let the game reset, or take control and close the game yourself.

After completing the game at least once, each time you replay the game, one PC will turn on. "AWAITING INPUT" will be displayed on the monitor. Once you interact with it, it will begin to load. Throughout 5 playthroughs, you need to click on different PCs each time to unlock this ending. 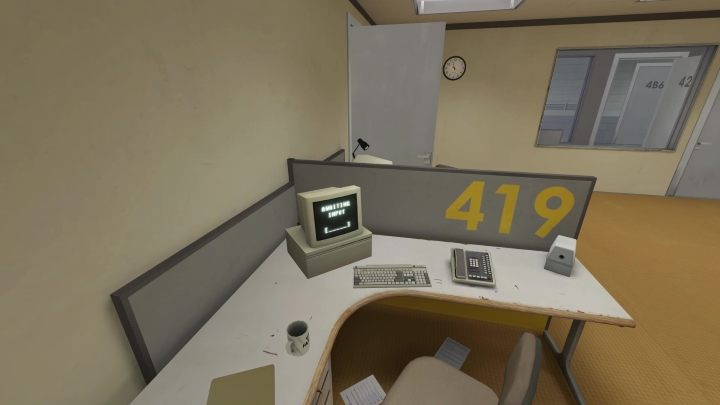 The first of these monitors will appear at employee 419's desk (second room with desks). 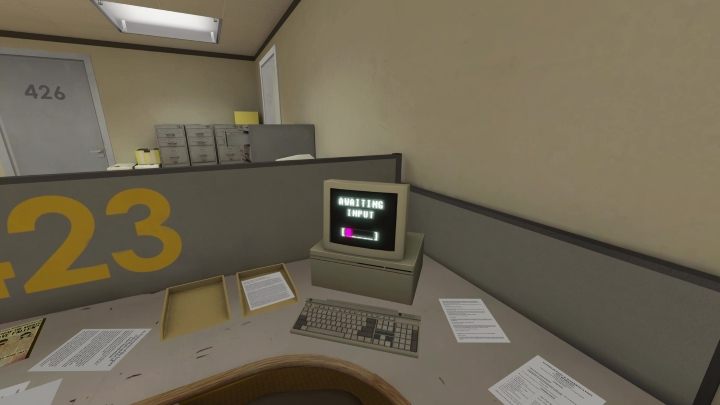 Upon the next playthrough, employee 423's PC will boot up. You'll find it in the same room as the previous one but in the opposite corner. 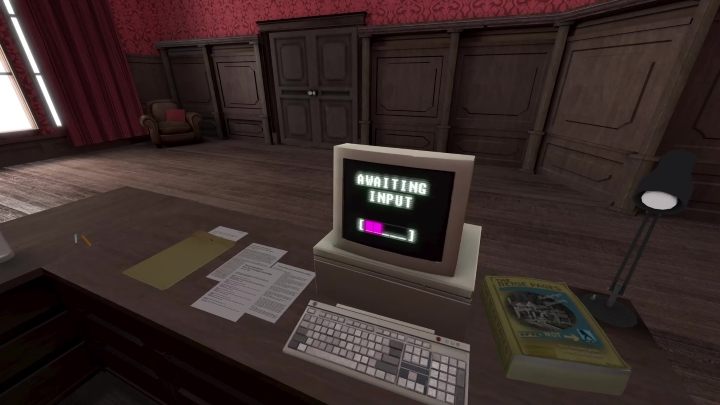 During your next playthrough, you'll be able to interact with the PC in front of the boss's office. 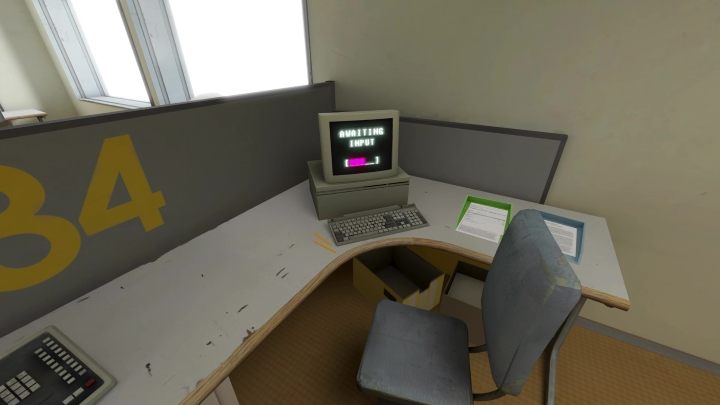 After restarting the game again, you'll find the PC in the first office room, at employee 434's desk. 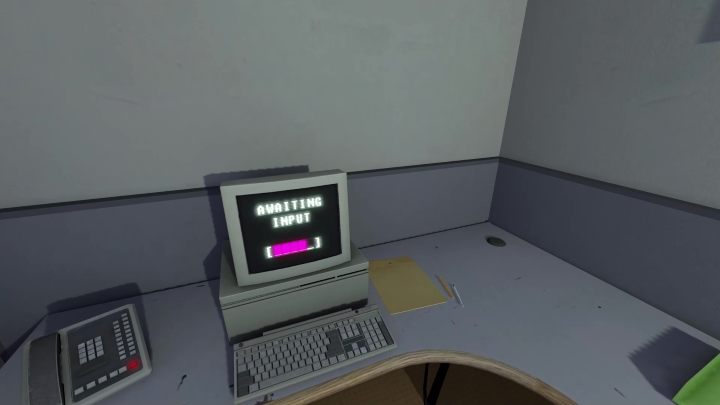 The final PC can be found in the game's starting room. Activating it will take you to another location with colored buttons all around you. They can be pressed, but after a while they will turn back to their original color - they have no function. The only way to leave is to manually reset or close the game.

From now on, you will be able to access this location each time you start a new game by interacting with the PC in your room. However, the counter will reset when you close the game (app).

Although this is one of the endings added in the Ultra Deluxe edition, you can get it even before you officially activate the new content, which is why we included it on this list. 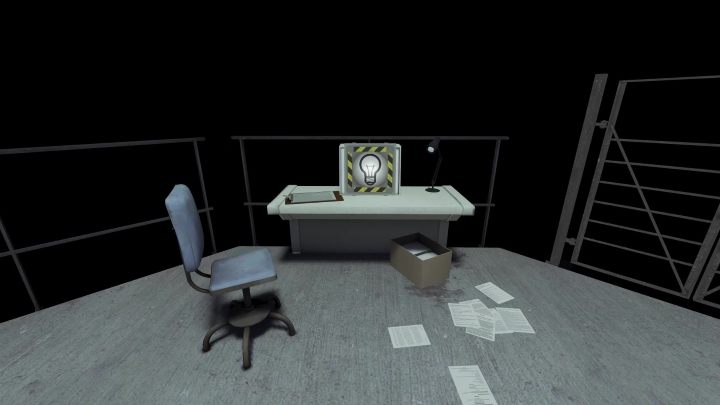 To get this ending, follow the narrator's instructions until you enter the Mind Control Facility. There, on the first platform with a button, climb onto the chair, then onto the desk, and finally go behind the railing. This way, you'll arrive at the very bottom of the facility and you'll hear a tune.

To reach this ending, follow the narrator's directions until you reach the boss's office. 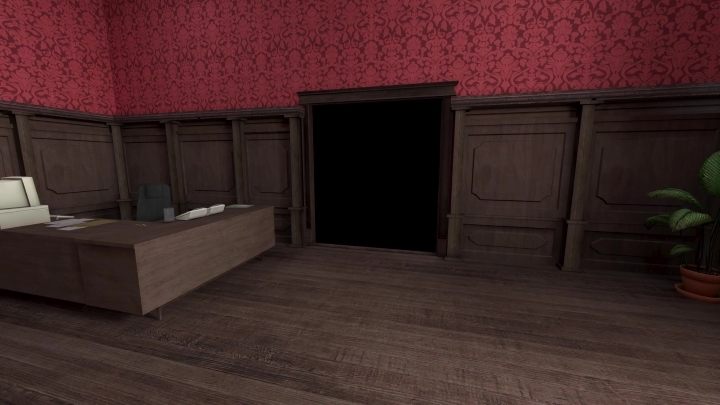 Once you pass through the massive double gate, quickly go back through it. If everything goes well, it should close behind you. Instead, a door will open, allowing you to backtrack. Head back where you came from. 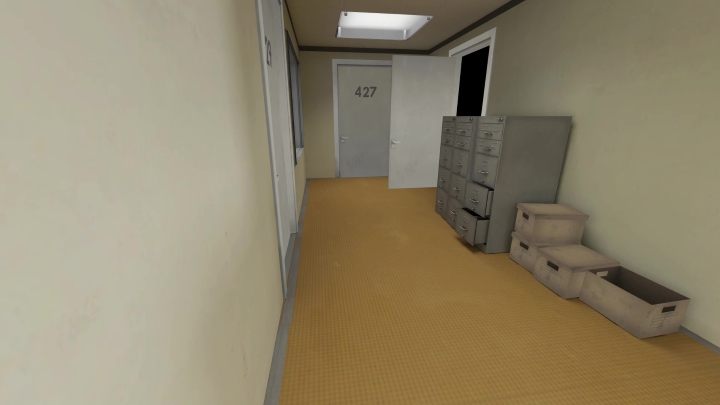 Go all the way to the room where you started the game. You'll find that the door to the neighbouring room is open. Head inside.

Continue climbing the steps until you reach the top of the stairs. There you will see the red "escape pod" and "escape" signs. Enter the dark tunnel and continue along until you spot a red capsule. Walk up to it and... the game will start all over again.

To reach this ending, follow the narrator's instructions until you reach the staircase leading to the boss's office. 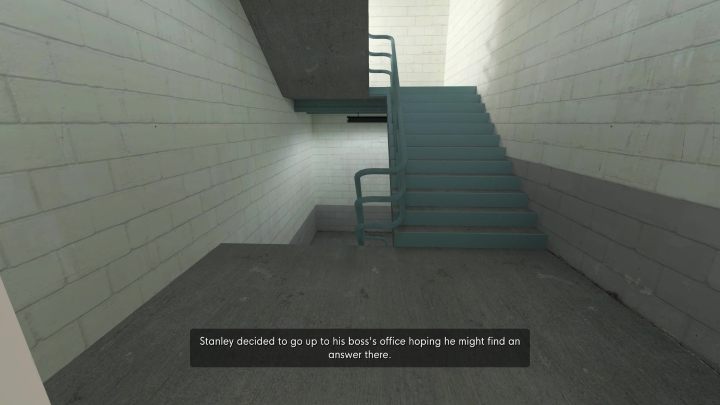 Once there, head down. Walk the corridors and have strange adventures until the ending cutscene starts playing.

To get this ending, listen to the narrator until you pass the conference room. 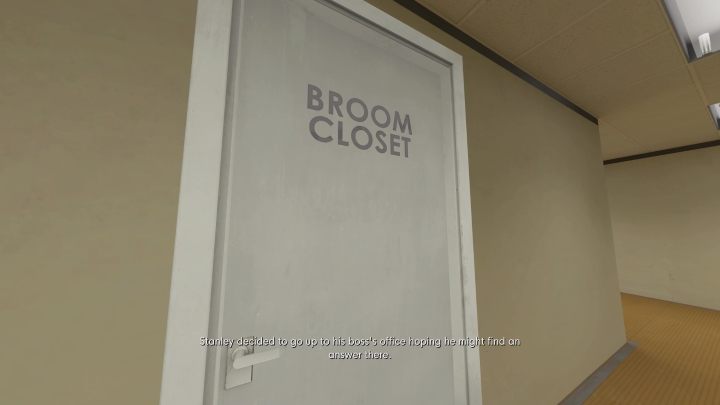 Just beyond it is a door that says "Broom Closet." Go inside and close the door. Wait for the narrator to call another player and impatiently insist that you go out into the hallway. Do this, then return to the closet. After listening to another one of the voice's monologues, you can continue the game.

If you enter this room again when replaying the game, the narrator will also comment on this. On following playthroughs, the broom closet door will be boarded up.

Go back upstairs, then return to the office, listen to the voice once more, head back and take the elevator down. 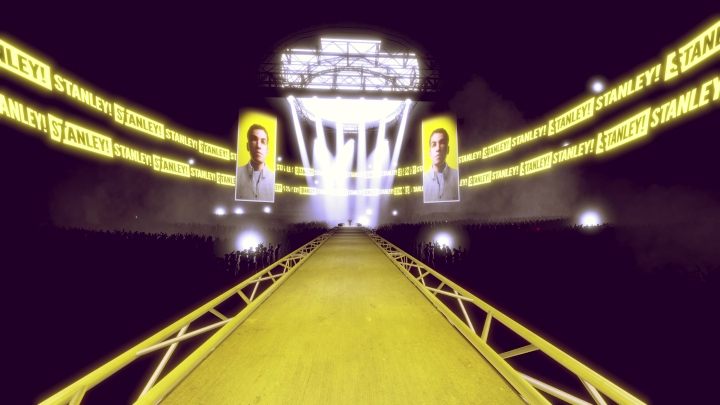 This isn't the end, however, as you need to take it to the top again. This time the elevator will take you to a brand new location. Continue onwards until you reach the ending.