This page of the guide explains how to unlock all the achievements in The Stanley Parable Ultra Deluxe. Most of them are quite unusual. 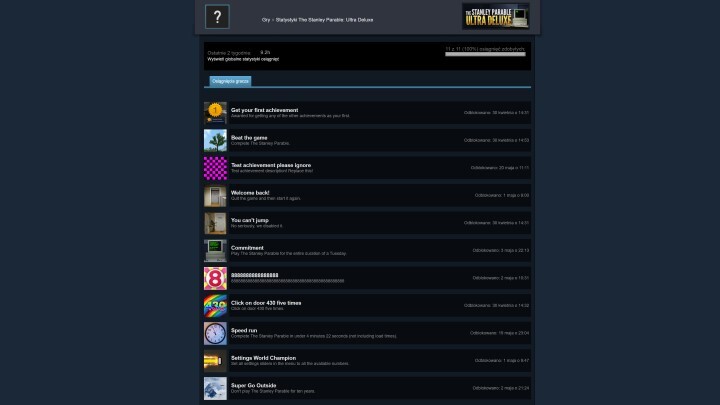 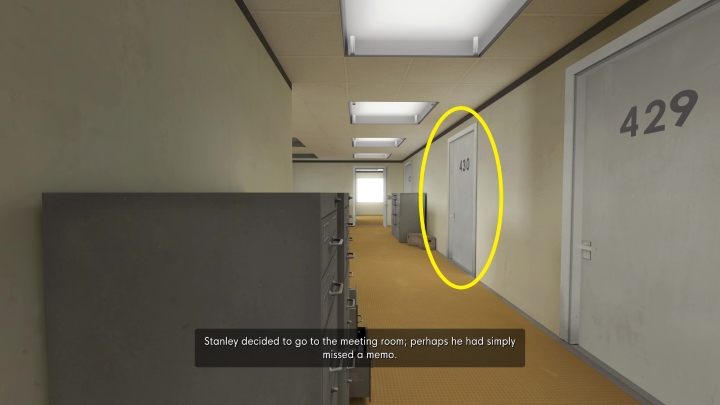 After exiting the starting room, on the right, you'll notice a door numbered 430.

Next, the voice will send you to door 417, and you'll need to interact with it several times. You'll find it further into the office. It's in the small hallway behind the second room with the desks (you passed a similar room just after leaving your office). 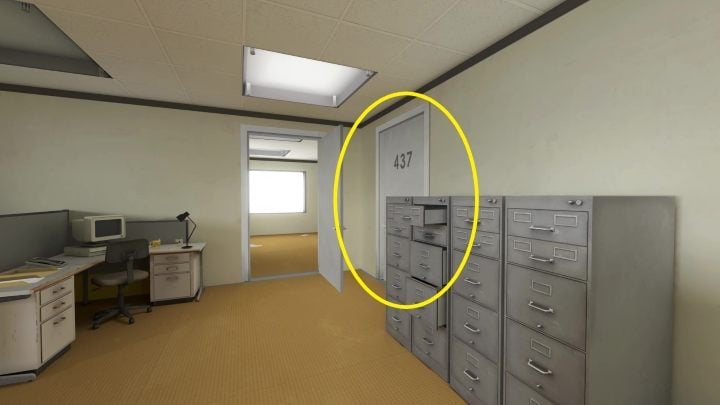 However, this still won't be enough for the narrator. They will direct you to door 437. Return to the first room with the desks (where you started trying to obtain this achievement). The door in question is located just before the room's exit. 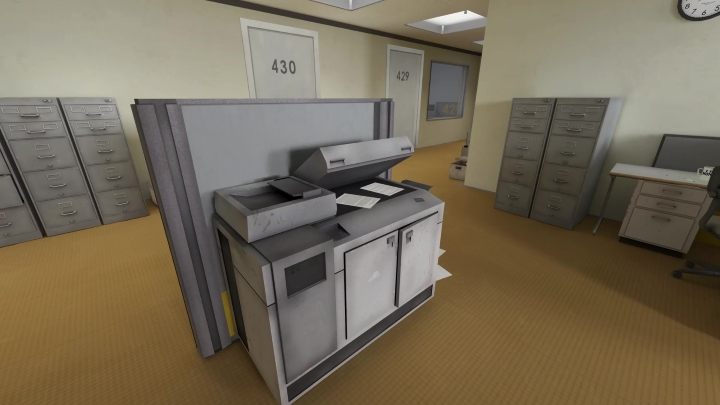 Afterward, the narrator will tell you to interact with the photocopier. It's located near doors 437 and 430.

After this, return to door 417 again.

The next step is to climb onto employee number 419's desk. You'll find it in the second room with the desks (just before the hallway with door 417). There is no jumping in this game (which is tied to another achievement), so you have to get onto this piece of furniture in another way. Try to get on the chair and then on a desk.

You final task is to click on door 430 five times again. You can now take pride in your well-earned achievement.

If you press door 430 five times again in later playthroughs, the narrator will restart the dialogue associated with this achievement. However, you won't get any rewards or new lines of dialogue for completing the task again.

Get your first achievement

As the name suggests, you can only earn this achievement by obtaining another achievement.

To get this achievement, all you need to do is get the Freedom ending.

To get this achievement, you will have to exit the game and reopen it.

The game assigns a key to jumping (spacebar) in the options, but it doesn't work in-game. You'll get this achievement for trying to jump several times.

In order to unlock this achievement, you need to move each slider (across its entire length) and tick each box in the settings. Selecting certain options will reveal additional sliders - move them too. 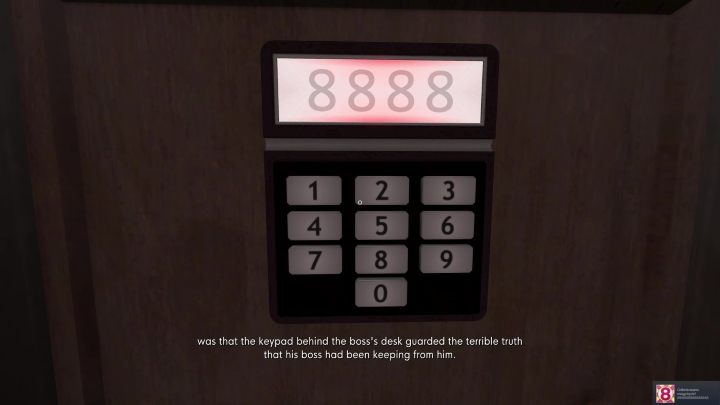 This achievement will appear in your library after you enter the code 8888 twice in the boss's office.

You can get this achievement by turning the game on ten years after the last time you played it.

However, it can be cheated. Simply open the game, then close it and change the date on your computer. You should get the achievement once you reopen the game.

You might also have to restart Steam or even your PC.

This is another unusual achievement. You need to keep the game open for the duration of an entire Tuesday. Open the game on Monday before midnight, and you should get the achievement at midnight on Tuesday. During this time you can minimize the game if you don't want to play.

It's also worth noting that you can cheat the clock a bit. While you, unfortunately, have to have the game on for about 24 hours (we'll explain why soon), you don't have to do it on Tuesday. Before launching the game, change the date on your computer to Monday before midnight. You'll get this achievement 24 hours later, once Tuesday ends on your computer.

While attempting to earn this achievement, the game closed on us for a moment, but we quickly restarted it and got the achievement as scheduled. Because of this, it's difficult to pinpoint The Stanley Parable's allotted margin of error. So if you briefly lose your connection, don't lose hope!

For this achievement, you have to complete the game (with the Freedom ending) in under 4 minutes and 22 seconds. It's not possible to do it by playing the game the traditional way. You have to prepare for this. 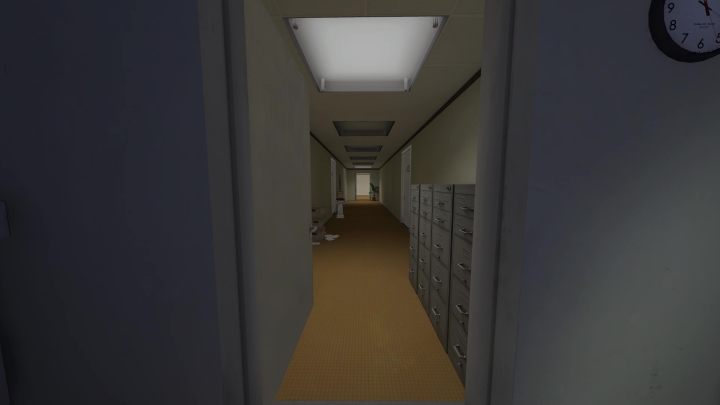 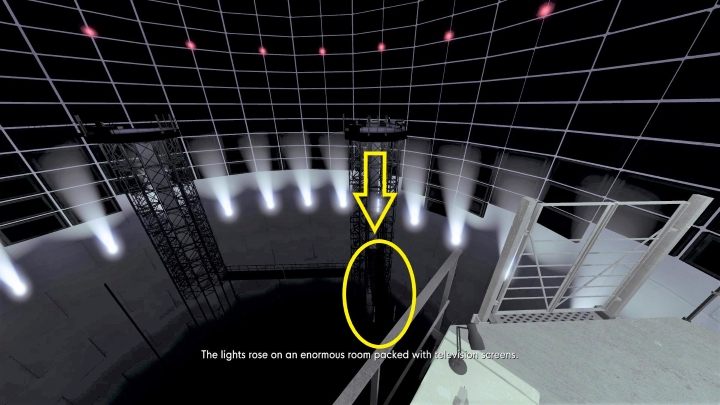 If you don't stop along the way and follow the tips above, you will unlock the achievement by reaching the end of the way.

This achievement doesn't have a specific method of getting it in the description. The game describes how to get it when you visit the expo hall. Stanley Parable presents you with the achievement machine for the first time. However, it don't work at first.

To fix it, you have to complete the Epilogue (more on that on a separate page of the guide: New content - how to unlock?) and agree to the voice proposal. When you return to the main game, the New Content door will appear again. Enter it. Then, on the next playthrough, use that door again. This will give you access to the expo hall again. 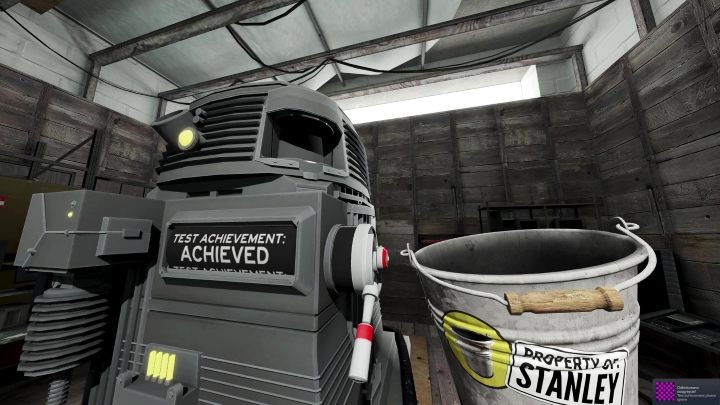