Here you will find the list of side quests in The Serpent Rogue. You will learn how to complete each of the tasks and how to get them. We provide information about the rewards - if there are any - and tips for completing the quests. 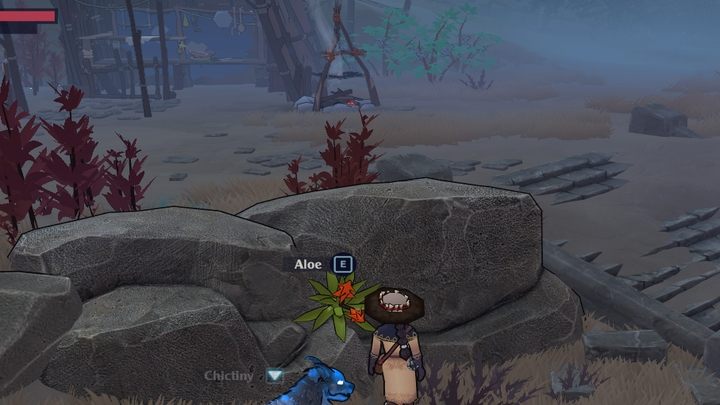 The first side quest is called The Grand Research. You have to obtain and research the basic resources - Aloe, Berry and Shell. Aloe and Berry can be found in large amounts (and regrowing regularly) in the east of the Camp.

Shell is an egg shell. You can find them while exploring the Wasteland, in hen nests next to regular eggs, and by throwing eggs into the ground and breaking them. Completing this quest is not required to unlock other quests, nor is it rewarded in any way - it serves as a tutorial. 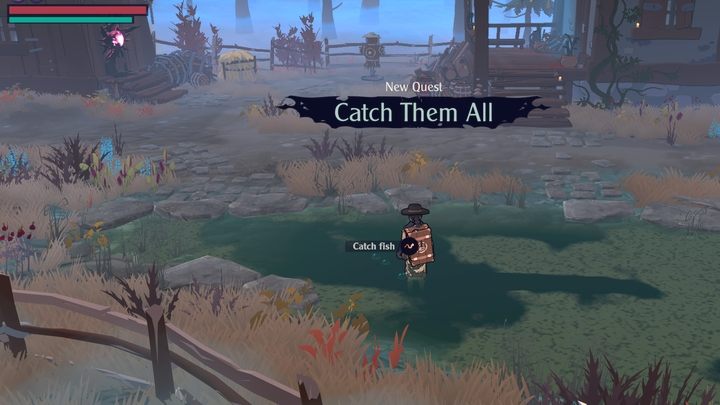 In Abandoned House - the first location - you will come across a pond where you can catch fish (or actually Fishbones). To catch them, get some Worms from the nearby trunk. By throwing them as bait, you will make the fish pop out - catch them by holding down the action button. 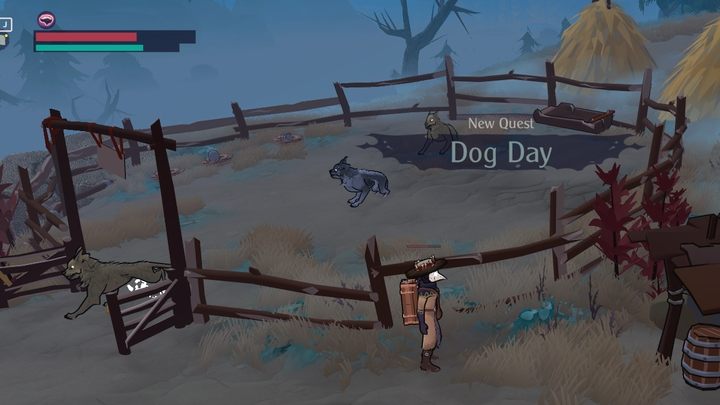 When you reach the northern part of the Camp, you will find a house that will serve as a resting point. Next to it there is a farm where you can palce tamed animals. The quest will activate when you approach it. 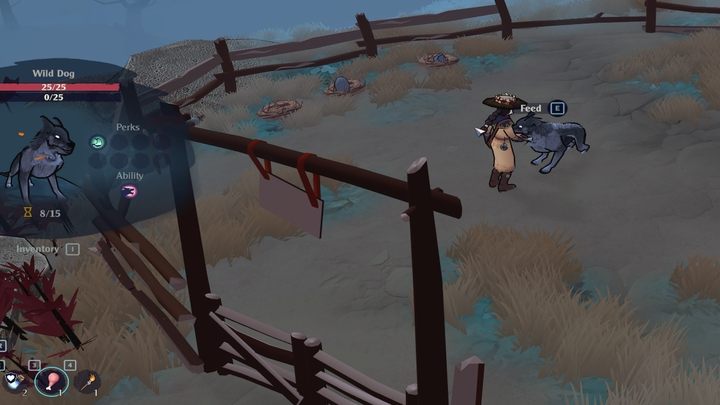 You have to tame the dog. To do this, get Raw Meat. Put them in the quick access bar and, when holding them in your hand, approach the dog - a Feed action will appear. Feed the animal 1-2 pieces of meat to tame it. It will become your first companion. You can get meat by killing chickens in the Wasteland. 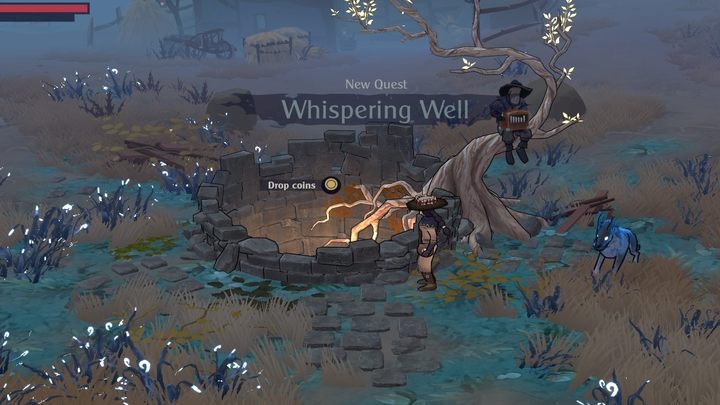 You will start Whispering Well in the Camp by talking to the stranger on the tree. To complete it, you need to throw 100 coins into the well - this summons a vessel you will use to heal corrupted areas or break it to receive Purifying potions.

The Looming Vines is a side quest in the Camp. Go to the east of the location to find a lonely man sitting on the ground - Rogue. 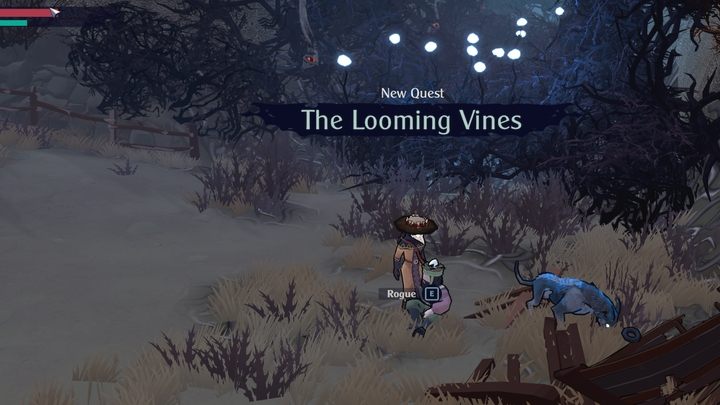 He will tell you that in order to cross the gorge, you have to use fire. To do this, go to the next location - Wasteland. There you have a chance to find lit torches in the west (closer to the northern edge). Some enemies have them too. 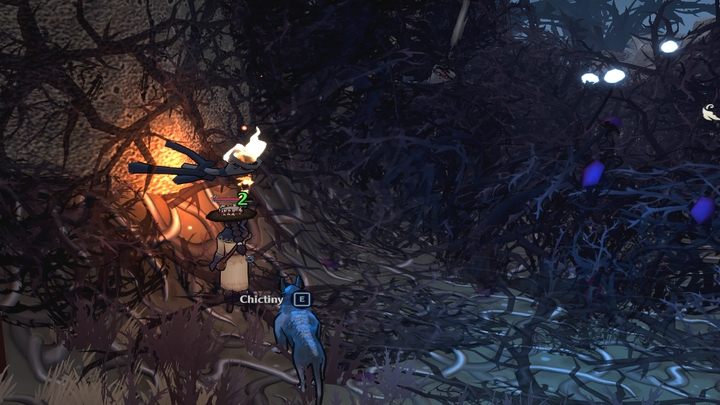 Go to the location with a lit torch - the plants will run away when exposed to the light. Turn on all three lamps along the gorge to permanently unlock the passage to the Pier. 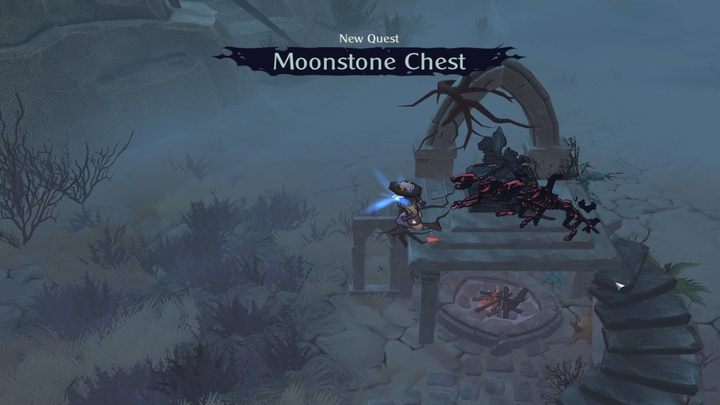 The quest will begin when you find your first Moonchest in the Wasteland. To open it (these chests contain numerous treasures and a lot of gold), you have to collect 3x Moonstones. 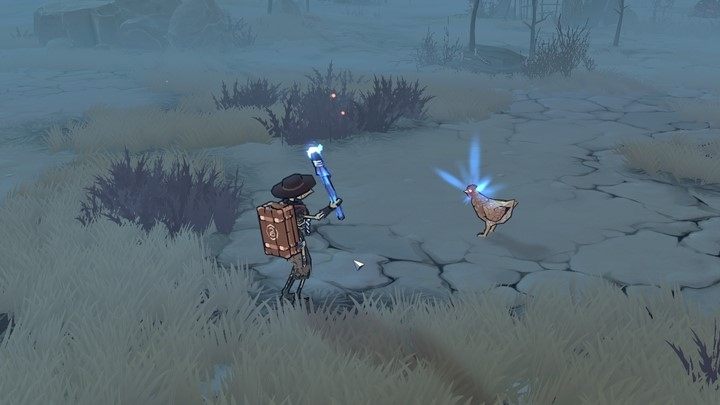 You need to take stones from random opponents in the Wasteland and Swamp (you can move between locations and use the same stones in both places). Moonstones get destroyed in other locations. You can steal the stones or collect them after killing their previous owner. You will recognize a monster with a stone by the blue light coming out of it. The stones in the Wasteland appear in specific situations:

When you have three stones, find a chest and hold down the action button to open it.

Once you reach the Swamp, head northeast to find a passage to Mavka's Shelter. In this location, you will be able to recruit monsters for Butterflies. However, you must first complete the task of freeing 4 monsters - Huhis. 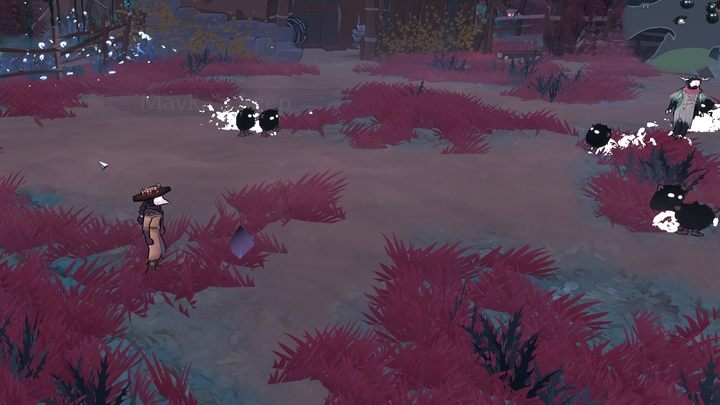 The monsters can be found in 4 locations:

The monsters cannot be interacted with or killed - you will complete the quest as soon as you find all Huhis.

After healing the tree in the Wasteland, head north and cross the bridge. There is a maze and a skeleton in front of it that you can talk to. He will pay you 150 coins for bringing him his sword - Banisher. 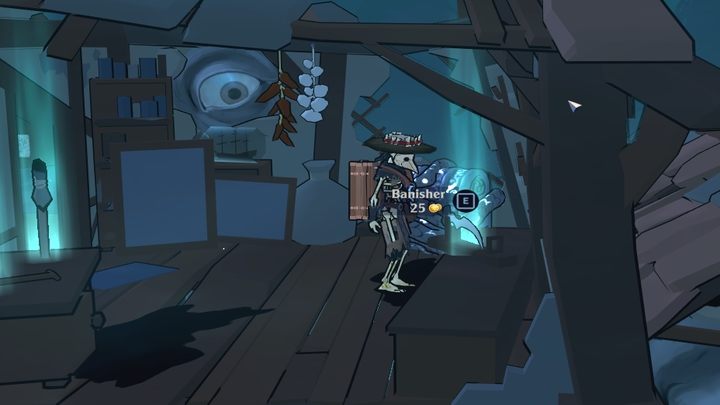 You can buy the sword from the Merchant.

Note - you don't actually need to get the sword from the cave behind the maze. You can provide him with any other sword called Banisher (with no buffs). You can find them at the Merchant for 25 gold, and sometimes in chests or randomly brought by recruits from the ship. 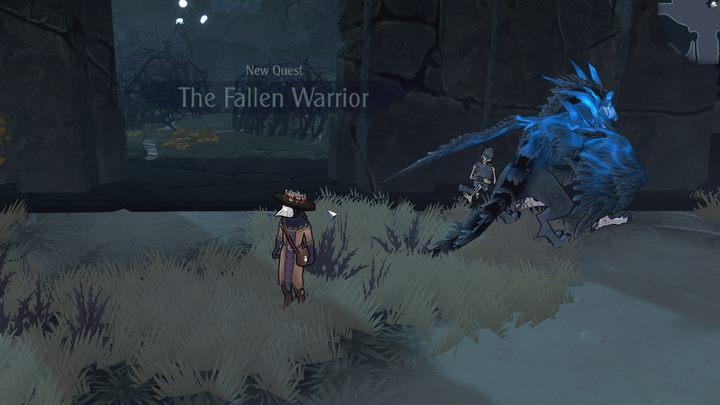 To complete this mission, you must finish the maze. Take a torch with you, as there are many thorns inside the maze.

Use the bush to be able to move with the lit torch through the maze without fear of being attacked by monsters. 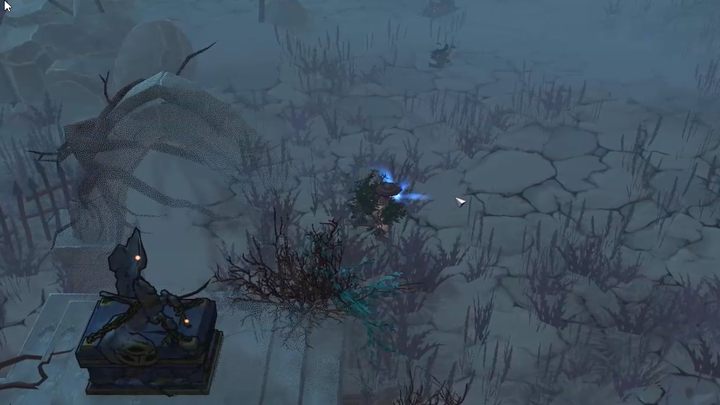 Before entering the maze, be sure to collect 3 Moonstones. They are required to open the gate at the end of the maze (once - the gate will stay open forever). In addition, there is a bridge further in the area. Interact with the bridge to lower it and get a shortcut. 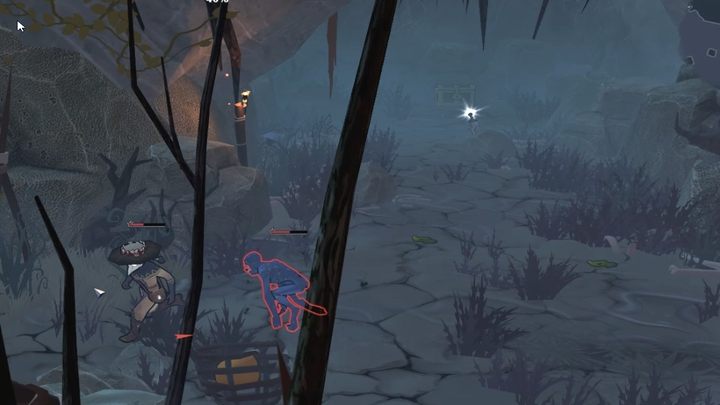 The sword is inside the cave in the eastern end of the location, stuck in a stone. You can try to take it without fighting four Ghouls in the cave. Ask your followers for help and use Damage potions to fight from a distance. You can also try to make the Ghouls spread out around the area to be able to safely enter the cave. 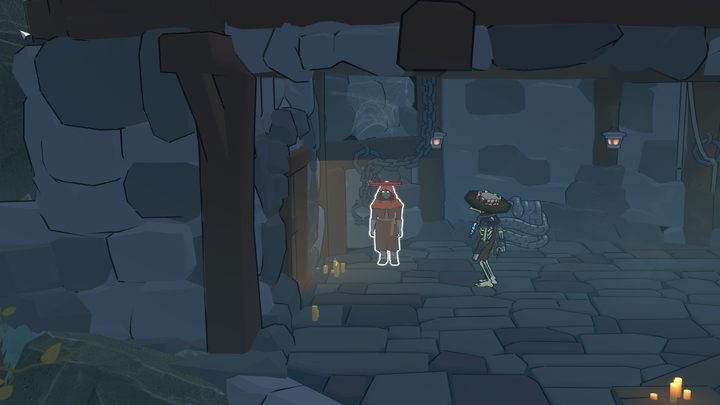 Fighting Pit is located behind the door in the Church's basement. You will start the quest by talking to the man at the entrance. You can repeat them and receive gold for fights. However, there are only 5 fights and each of them lets you win more gold, ending up at 70. 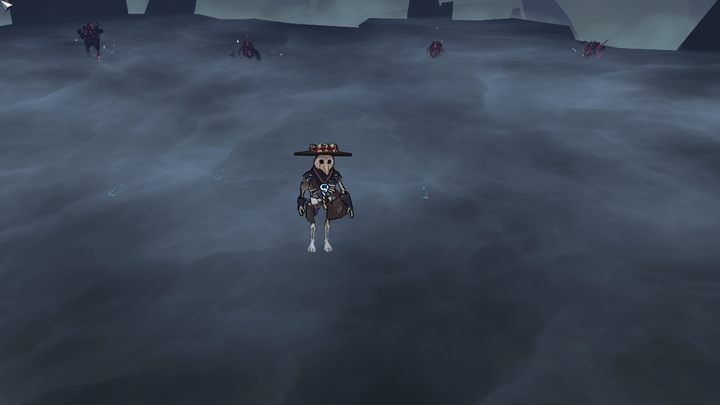 You enter the arena with just your fists and face groups of enemies using items lying in the arena. It's worth using the Restless form to increase HP and damage.

Bug: If you wear the Claw Amulet before entering the Fighting Pit, it will still provide a bonus even though it disappears after entering the location. This way, you will deal 15 points of damage as a skeleton with an amulet, without using a weapon. 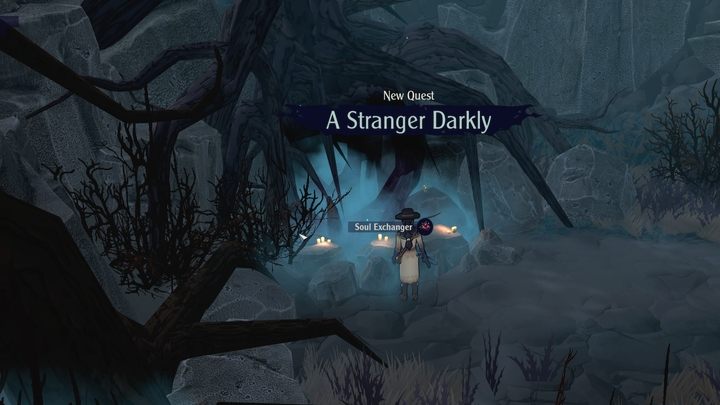 You will start this mission in the south of the Undertaker. There is an altar there. Interact with it. You need to bring the Cursed Ember. The demon will exchange it for Soul-Eater - a container for catching souls. You can do this multiple times. 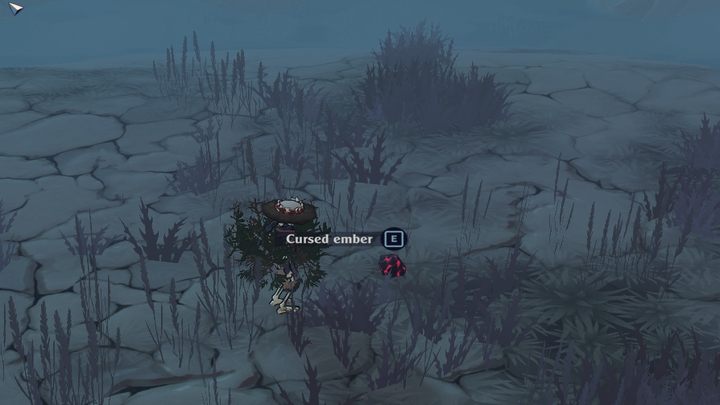 You can find Cursed Ember by destroying Corruption blisters in the Wasteland. The chance of dropping it is low - it will be a red-and-black stone, which, when picked up, imposes a health-stealing curse on the wearer. Because of that, you have to move it quickly using fast travel. 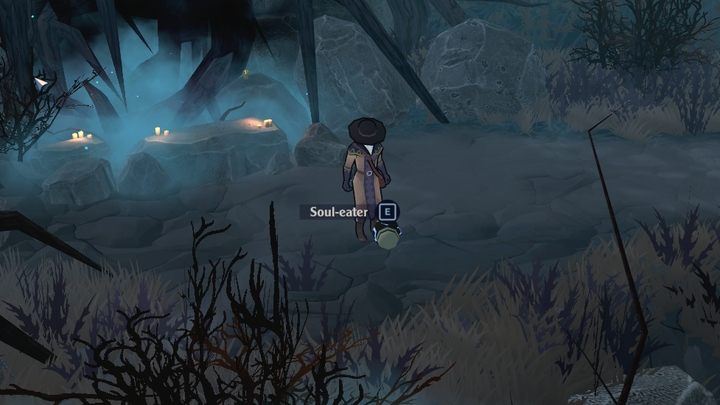 Soul Eater will allow you to capture souls - put it on the ground, kill a living being and destroy the container quickly before it turns into a demon (or collect it).