This page contains the walkthrough of the first stage in The Serpent Rogue. You'll learn how to complete The Corrupted Land quest by healing the tree in the Wasteland and defeating or taming Valravn.

The next task will take a while, as you'll need to fulfill several key conditions and prepare well for it. The Corrupted Land is a quest that takes place in the Wasteland, i.e. the third location, north of the Camp. By completing this quest, you'll unlock new areas, so it's best to finish it as soon as possible 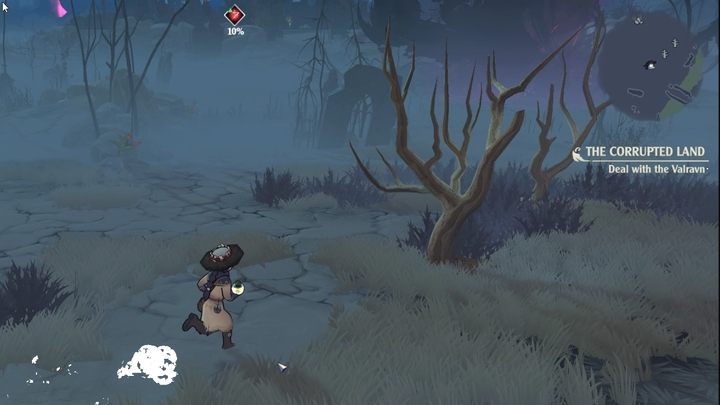 Right in the center of this area, you'll find a Corrupted tree. Approach it. Once you get near it, a cut-scene involving the monster will trigger and you'll need to either defeat or cure it. 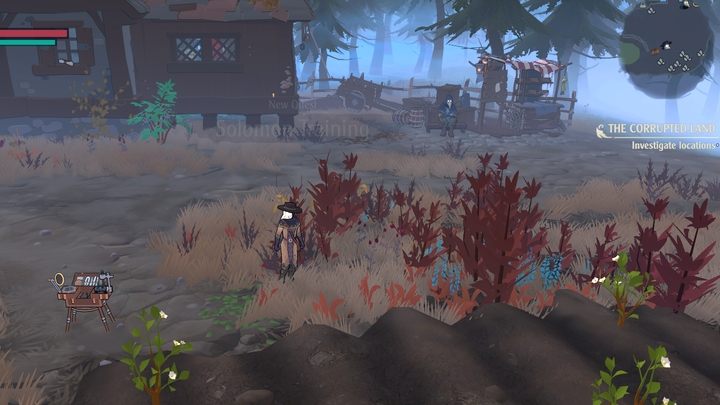 Your first task is Solomon Training. Talk to the man at the cabin in the first location, the Abandoned House. Then, inspect the Booth to the right and the Portable Lab next to the field. Afterwards, enter the fog on the right to head to the next location.

The easiest way to defeat Valravn is to use Damage potions. The monster has 120 health points and each potion reduces the total by 10. Before initiating the fight, consider preparing some Soulless potions or those that apply debuffs such as Wound. You should also consider bringing some followers (humans or animals) - at this stage it's better to bet on their offensive capabilities, as they have relatively low HP pools. For more information on potions, check out the Potion Recipes page.

To unlock the option to recruit followers for gold, first you'll need to complete The Looming Vines side quest in the Camp and then talk to the Harbormaster.

After curing Valravn, you can either leave it there or tame it. Regardless of your choice, you'll be able to interact with the tree and progress. 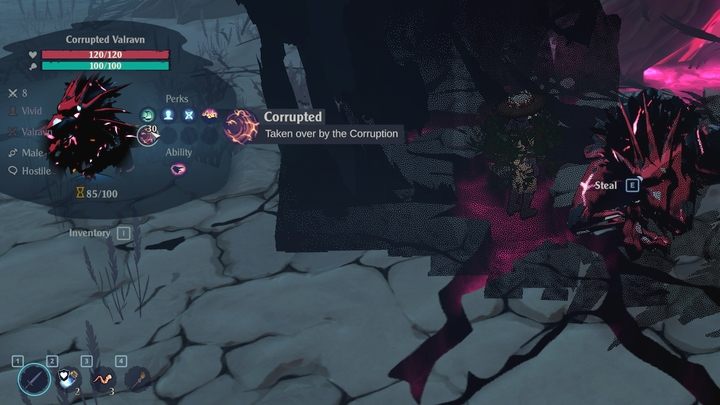 Healing Valravn is the more challenging solution. Some basic information:

First, you need to heal its Corruption, which will prevent the opponent from being hostile towards you. Valravn has 30 corruption points and, since one Purifying potion removes 5, you'll need a total of 6 potions. 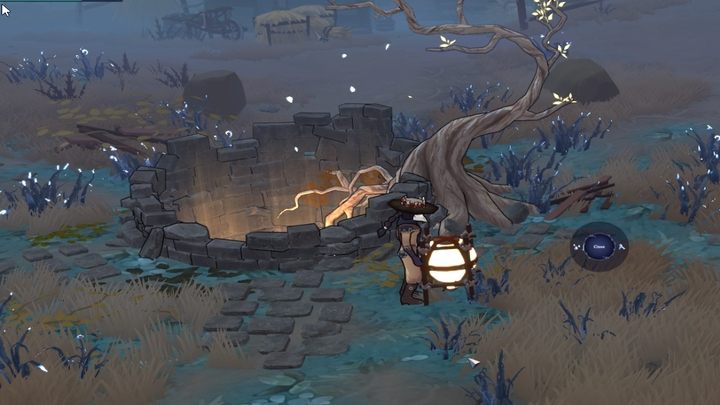 To get Purifying potions, you need to gather 100 coins and then throw them into the well in the Camp. A tank will appear next to you and you'll get 5 Purifying potions by interacting with it and breaking it. The missing potion can be found while exploring or by purchasing a second tank, which isn't a bad idea considering that you might miss when throwing the potion. 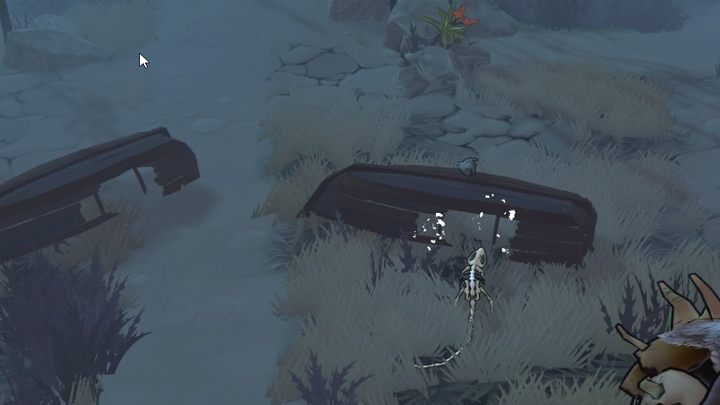 To get the fish, you'll need to turn into a rat (either use a transformation potion or the morphing statues in the Wasteland) and search the overturned boats. 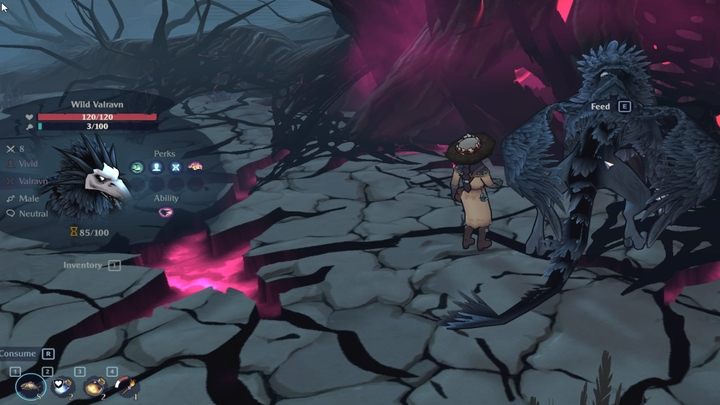 The monster will turn gray and stop attacking once it has been cured. It's time to grab the fish and feed the creature. Hearts will appear above the monster once it has been tamed and its status will change on the character screen.

As part of the main story, you'll have to cure the tree, allowing you to progress deeper into the area. 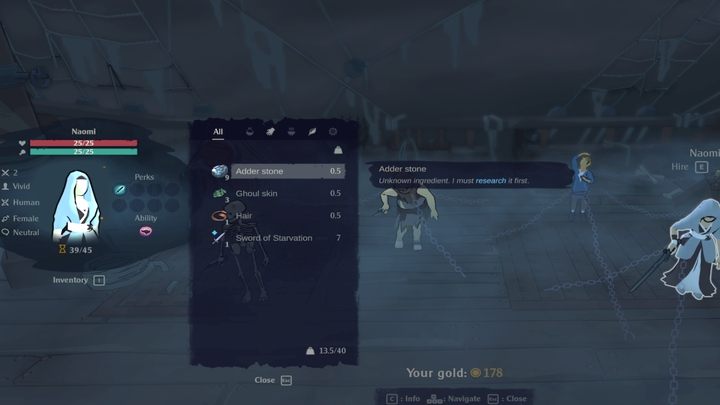 Before you can continue, you need to complete The Looming Vines side quest - find a torch in the Wasteland (or craft one with 1x Textile and 1x Log), then go through the bushes to the east of the Camp and light the torches along the way. Once there, talk to the Harbormaster and wait for the ship with the recruits to arrive. You need to recruit a human, as opposed to a skeleton. 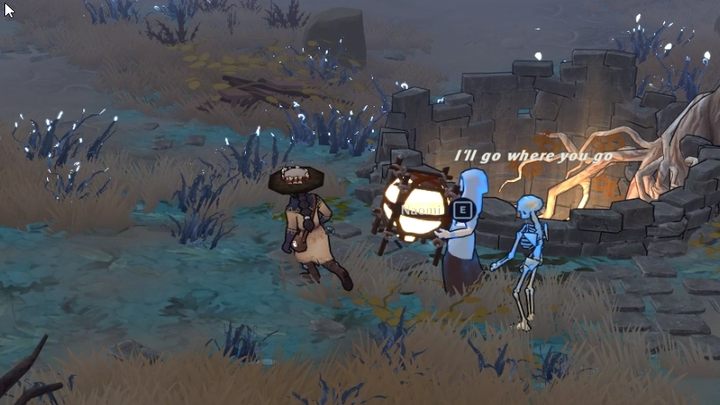 Next, summon the tank from the well in the Camp for 100 coins, then interact with it and order your follower to pick it up. 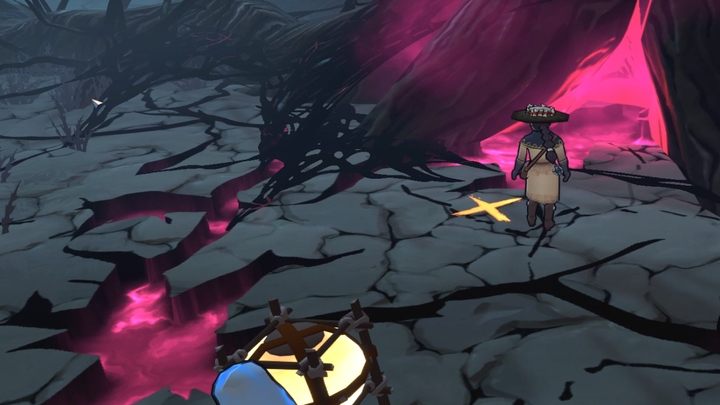 You'll need to place the tank in the indicated location in front of the tree. You'll not only finish this stage, but you'll also gain access to additional areas and the rest of the story.