Below you'll find a list of all achievements/trophies in The Serpent Rogue. You'll learn how to unlock them and get some advice on the most challenging achievements. The game has 42 achievements in total.

How to unlock: Craft a Sanctum Vessel 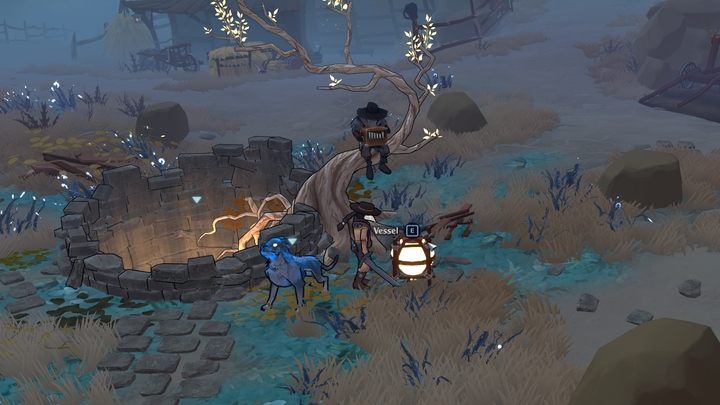 Comments: you need to summon the container by throwing 100 gold coins into the well in the Camp.

Ain't Nobody Got Time for That

How to unlock: Spend 500 Food to speed up time while sleeping.

Comments: sleeping in the bed lowers the green hunger bar. You can extend it by eating to continue sleeping. This achievement, of course, adds up the hunger points spent across all sleeping sessions during the game.

That Which Was Unknown

How to unlock: Discover a Dobhar Chu.

Comments: Dobhar-chu's Lair is located to the west, behind the Swamp. First, you'll need to obtain the key from the lakeside house in the north of the region.

How to unlock: Discover the Gorgon's location.

Comments: The Gorgon can be found in the Gorgon's Lair, which is located in the west of the Wasteland. You'll need to use a Purifying potion to destroy the 3 Corruption blisters blocking the entrance.

Suck out the Poison!

How to unlock: Remove Poison from yourself or your followers 10 times.

Comments: heal yourself or your followers with a potion that removes the Poison status effect.

How to unlock: Tame a Valravn.

Comments: this is one of the choices you can make in the main storyline and the option is also available later in the game. To tame Valravn in the Wasteland, you first need to cure its Corruption (with 6 Purifying potions) and then feed it Raw Fish or Spicy Fish Stew. After feeding it a couple of times, it will become tamed, unless it's too full (its hunger bar is maxed out). Valravn can also be found in the Swamp, where it won't be Corrupted, so you can immediately proceed to taming it.

Marshmallows by the Fire

How to unlock: Gather 10 Followers in the Camp location.

Comments: bring more people / monsters to the camp and let them wander around the camp or have them stay in place (Wait) until you gather 10 followers.

How to unlock: Using water, extinguish fire from yourself 3 times.

Comments: you can extinguish fire from yourself by entering the river or by using a glass bottle filled with river water.

How to unlock: Create 5 creatures. 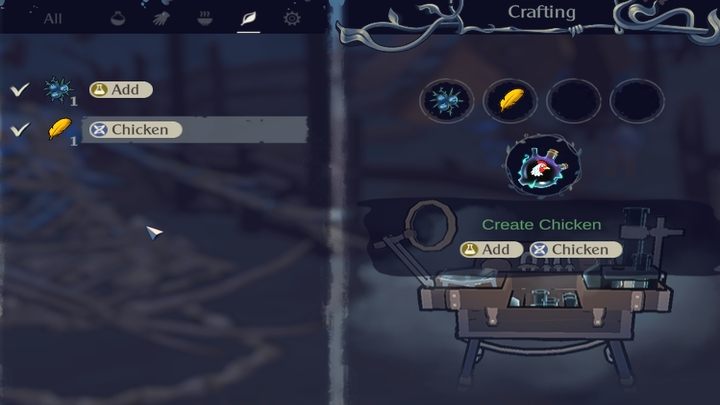 Comments: you have to use a Create potions made from Berries and a researched ingredient from the selected animal.

How to unlock: Cook 20 different dishes.

Comments: Cook 20 different (unique) dishes based on recipes you've learnt in-game, those from our guide, or those you've come up with on your own.

How to unlock: recruit 10 monsters in Mavka's Shelter.

Comments: you'll find the location where you can recruit creatures for a certain period of time after talking to Mavka in the north-east, behind the Swamp. To recruit them, you'll need Butterflies, which are easiest to catch by turning into a toad.

How to unlock: Receive 100 total damage from enemies.

Comments: you don't have to receive all this damage at once. It might be a good idea to morph into a creature with a lot of health, like a Faun or Valravn.

How to unlock: Open 25 Locks using a Picklock.

Comments: picklocks can be crafted from Metal Scraps and they can be used to open the numerous locked chests in the Wasteland.

How to unlock: Brew 10 Sloppy Potions.

Comments: Sloppy Potions result from unsuccessful attempts to create potions. To earn this achievement, mix inexpensive ingredients which won't produce any of the potions from your recipes.

How to unlock: Remove Corruption from 12 creatures. 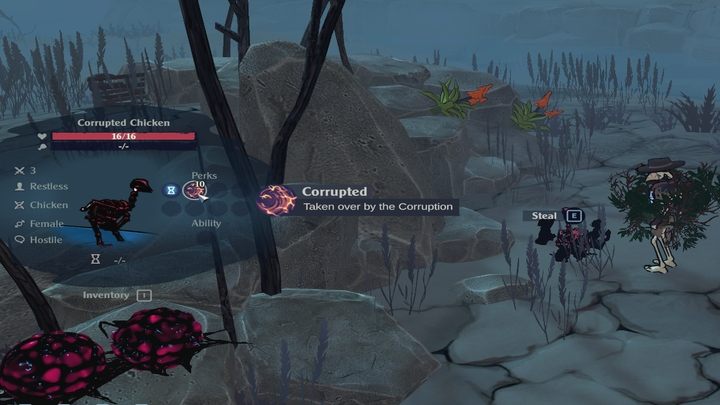 Comments: you can purge Corruption from creatures by using Purifying potions, which can be obtained from the well in the Camp for 100 gold. You can inspect creatures while camouflaged (as a bush / rat) to see how many Corruption points they have and how many potions you'll need to cure them.

Fisherman on the Prowl 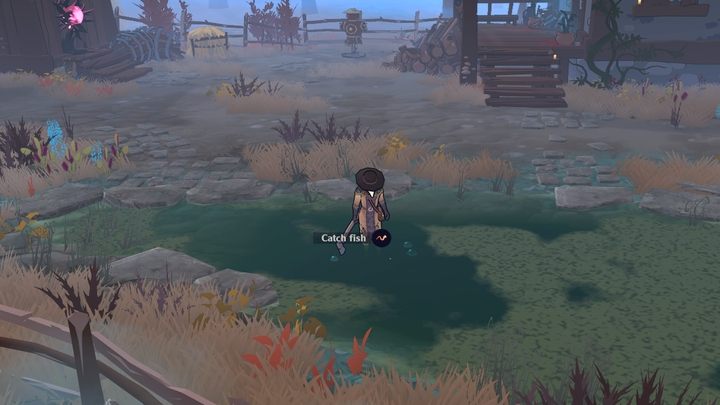 How to unlock: Catch 25 Fish in Water Banks.

How to unlock: Buy 5 items from the Merchant House.

Comments: You'll find the Merchant area behind the Church - you need to walk up right to the area's border to find the entrance to the Merchant location.

How to unlock: Discover 15 creatures in the Journal.

Comments: you can only research creatures that aren't aggressive towards you. You can also inspect their corpses after killing them or investigate them while camouflaged as a bush or morphed into a rat.

The First Rule of Fight Club

How to unlock: Find the Fighting Pit. 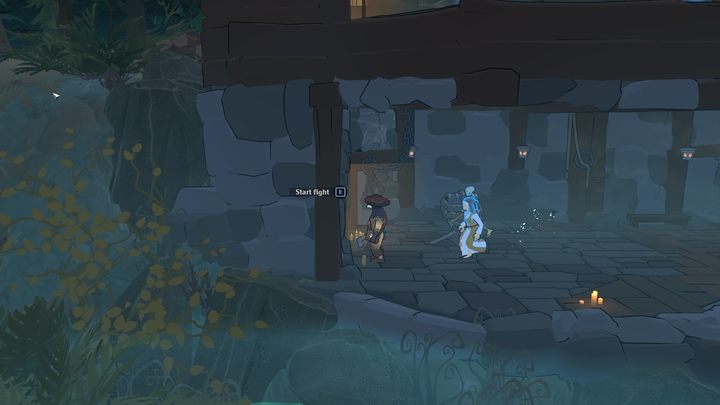 Comments: The Fighting Pit can be found below the Church, in the basement. On the left, there is a door leading to the arena, where you'll need to face challenges without using your own equipment or the help of your followers.

How to unlock: Open 3 Moonstone Chests. 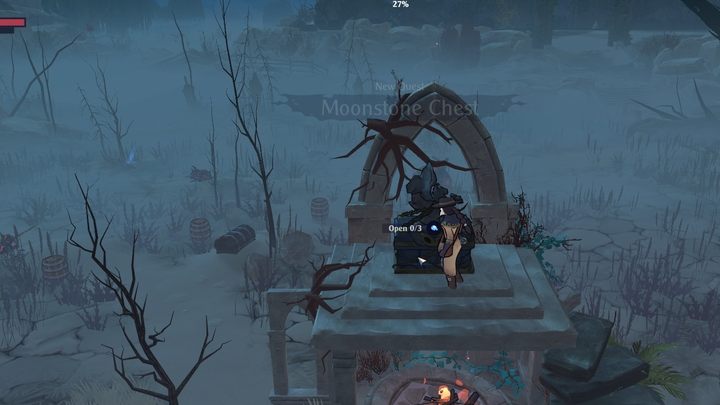 Comments: you need to find 3 Moonstones to open the chest. You can move between the Swamp and the Wasteland to keep the stones in case you fail to collect them in time, because moving to another location destroys them. The stones are interchangeable: those from the Wasteland will work on the Moonchest in the Swamp and vice versa.

How to unlock: Block incoming damage with a Broom 50 times.

Comments: the broom works as a weapon, so you can use it to block attacks. However, it doesn't damage the target and instead ages them.

Kill It With Fire!

How to unlock: Destroy 10 Soul Vessels.

Comments: Soul Eaters are containers received at the altar from the Undertaker by bringing Cursed Embers. Place them on the ground, kill a creature to fill the container with its soul, then destroy it. Alternatively, you can find these monsters in the maze and they'll count towards the achievement progress.

How to unlock: Discover the location of the Undertaker.

Comments: when you die after healing the tree in the Wasteland, you will encounter the Undertaker.

This could be better

How to unlock: Enhance 10 Weapons in the Smeltery.

Comments: you can forge and enhance weapons. Enhancing requires the same ingredients as potions as well as Spectral Fuel.

How to unlock: Brew 15 unique potions.

How to unlock: Brew 30 unique potions.

How to unlock: Find 25 worms in Stumps.

Comments: when kicked, the stumps in the Pier and the Abandoned House drop worms, which are considered a delicacy among chickens.

Let There Be Light!

How to unlock: Light up an extinguished Torch. 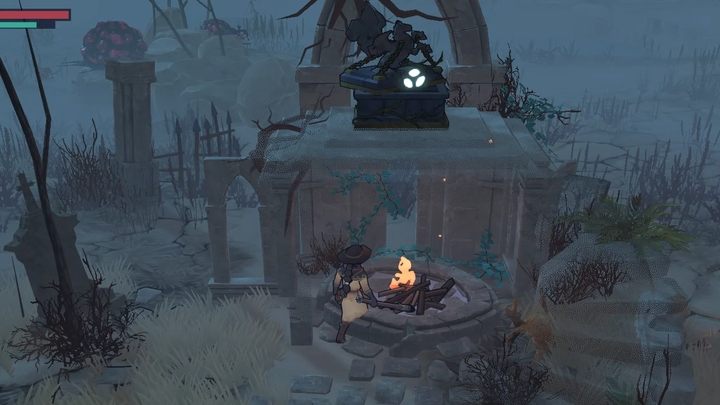 Comments: you can put out the torch by throwing it into water and you'll need a fire source to light it again.

Let's Have Some Fun!

How to unlock: Play with 5 different Creatures. 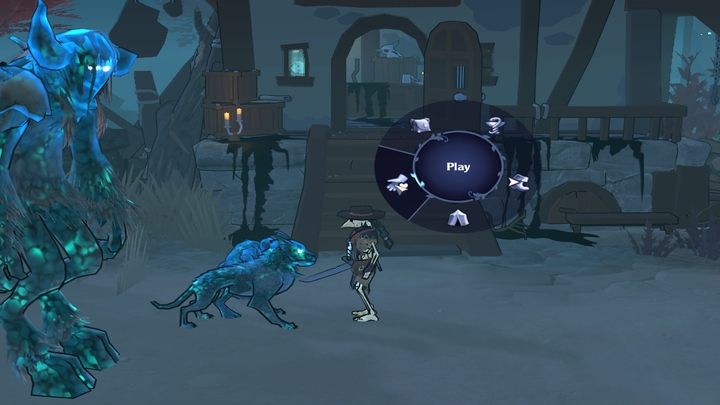 Comments: when talking to any tamed or summoned creature (follower), you can select the "Play" option.

How to unlock: Disperse 3 Ghouls using the Undertaker. 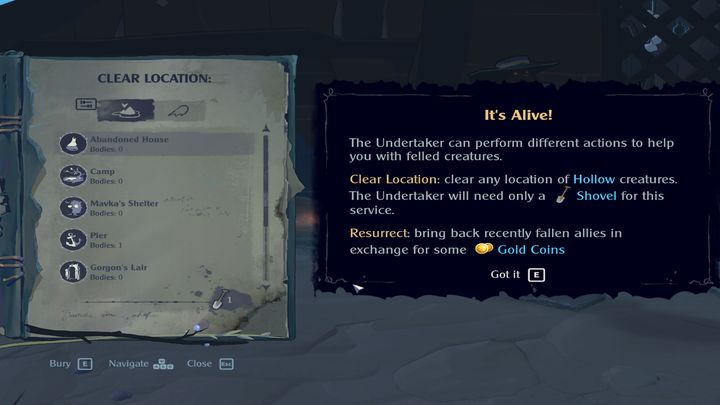 Comments: The Undertaker can resurrect, loot corpses, and even chase away monsters from areas. 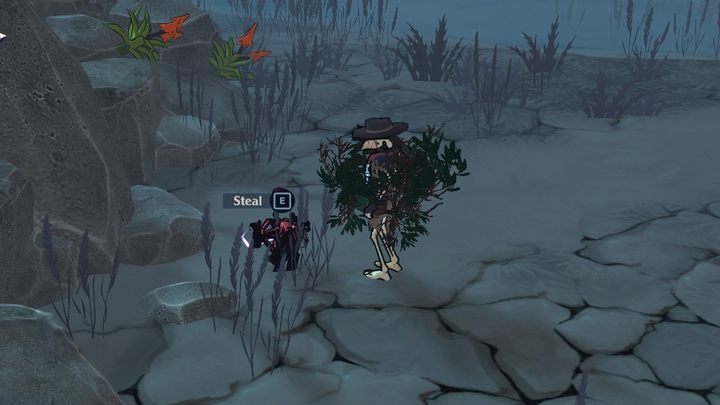 How to unlock: Steal 8 items from creatures.

Comments: by using a bush or turning into a rat, you can rob other people and animals. Use this skill 8 times.

The Sweet Smell of Success

How to unlock: Apply the "Stinky" status effect to yourself or an NPC 3 times.

Comments: by using a potion, you can inflict any follower or monster with the Stinky status. However, the easiest solution is to morph into a Ghoul three times, which has the Stinky status as a trait. 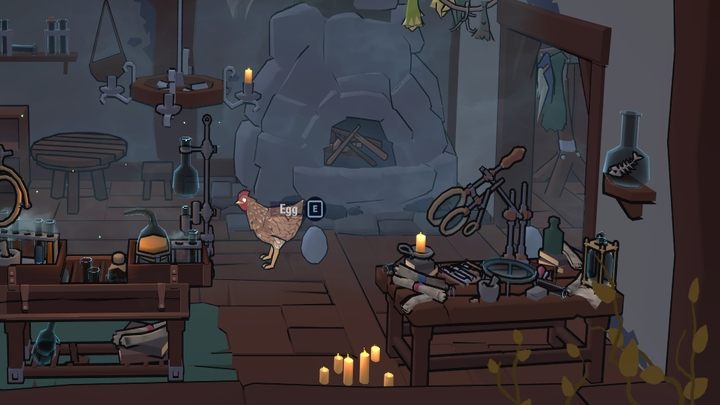 Comments: after turning into a chicken, you gain the skill to lay eggs. Make sure to have food in your inventory, because laying an egg permanently reduces your hunger bar. Keep in mind that you need to be a hen, not a rooster, and that you can't be in Restless form.

A Coin for the Ferryman

How to unlock: Bind 15 people from the Harbormaster on the ghost ship in the Pier.

Comments: you'll be able to do this after completing The Looming Vines quest and reaching the Pier.

Master of Life and Death

How to unlock: Resurrect 5 followers with the Undertaker.

Comments: the Undertaker can resurrect followers in exchange for a Shovel. You will unlock them by healing the tree in the Wasteland. Use the Undertaker's services 5 times.

How to unlock: Shoot down 5 flying Chickens. 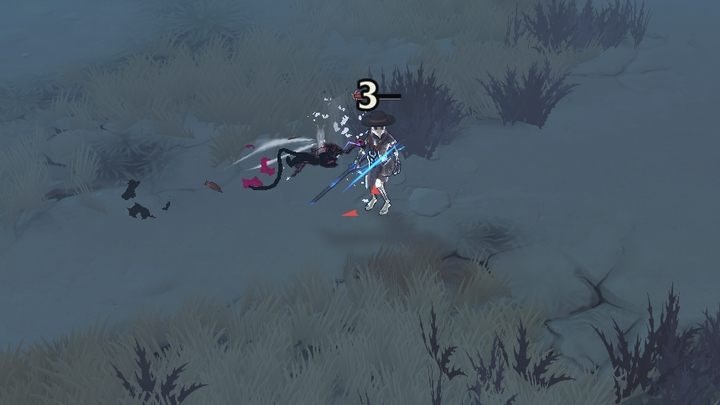 Comments: chickens (in the Wasteland) usually attack from mid-air by jumping. You need to kill them as they're flying.

How to unlock: Research all ingredients in your journal. 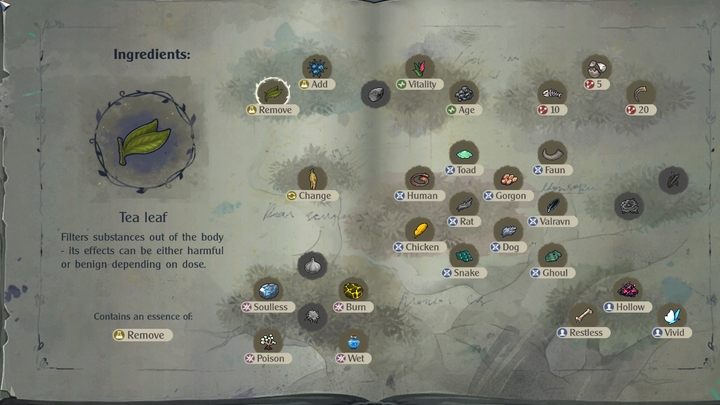 Comments: you need to research all the ingredients that are visible in your journal. This means that you have to collect the required amount of each ingredient and test them on the lab bench.

How to unlock: Catch 15 Butterflies. 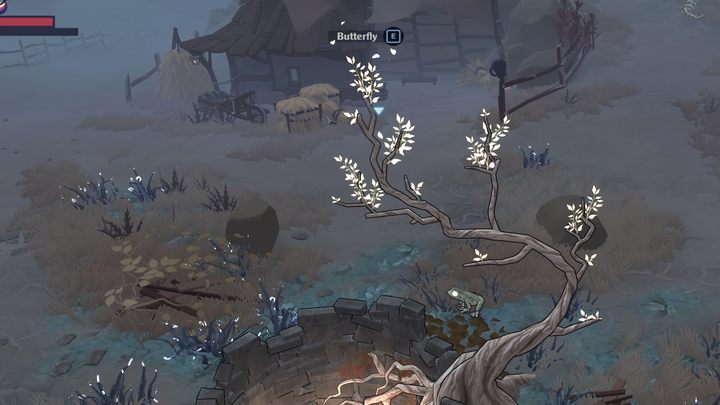 Comments: butterflies can be found near the Wishing Well in the Camp or flying by the blue, glowing flowers in the Wasteland and the Church. To catch butterflies more effectively, transform into a Toad and use its skill.

On your way to the Bank

How to unlock: Collect 500 gold coins.

Comments: coins are mainly earned by completing potion requests in the Booth, but can also be found in large amounts in Moonchests.

You Gonna Eat That

How to unlock: Complete The Fallen Warrior quest.

Comments: the quest can be initiated in the Wasteland by talking to the skeleton near the labyrinth (in the north, behind the bridge). You have to complete the labyrinth, then leave it (the gate requires 3 Moonstones), head right and get the Banisher sword stuck in the stone inside the cave.

How to unlock: Complete the game without killing a single creature

Comments: this is the most difficult achievement. Only attempt it on your second playthrough. Be especially careful of rats, as they steal items. Nothing bad will happen if you force creatures to fight each other.