Here you can read how to obtain crafting materials for melting and enhancing weapons and tools in The Serpent Rogue. These include textile, metal scraps, logs and charcoal. The key ingredient for upgrading is Spectral Fuel.

On separate pages of the guide, we have described the process of melting tools and a list of blueprints. 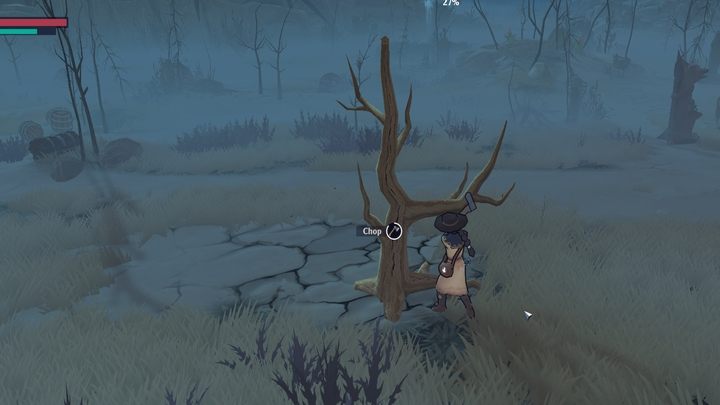 Logs are used in creating tools and weapons. In addition, after setting logs on fire (attack with a burning torch), they will turn into charcoal. Cut them down using an Ax. You can chop down tree fragments lying in the Swamp.

Where to get: Wasteland, Swamp (logs) 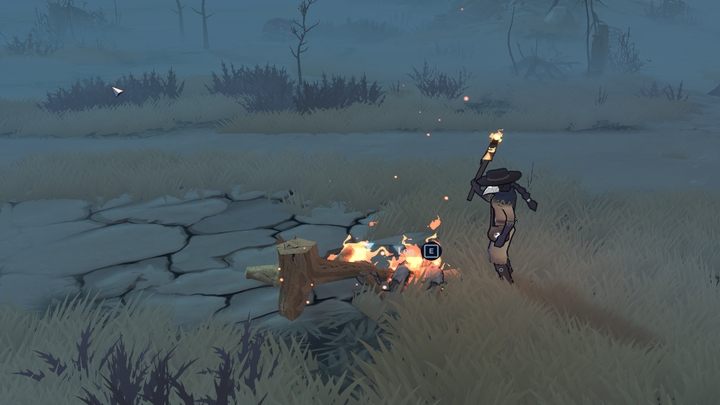 Use the torch to set fire to the logs to turn them into charcoal after a while. It is required for the smeltry. The easiest way is to cut down a lot of wood and set the logs on fire in the Camp, after throwing them out of your inventory. 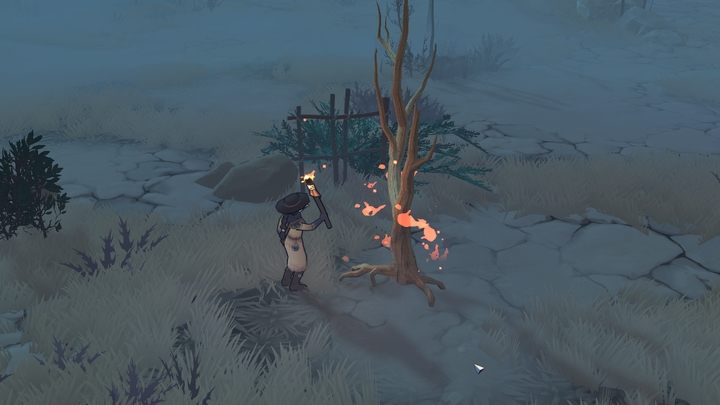 You can also set fire to the whole tree to save the ax, but usually you will only get 2 coals. You also have to wait a while for the tree to burn, which shortens your time spent in the Wasteland/Swamp. 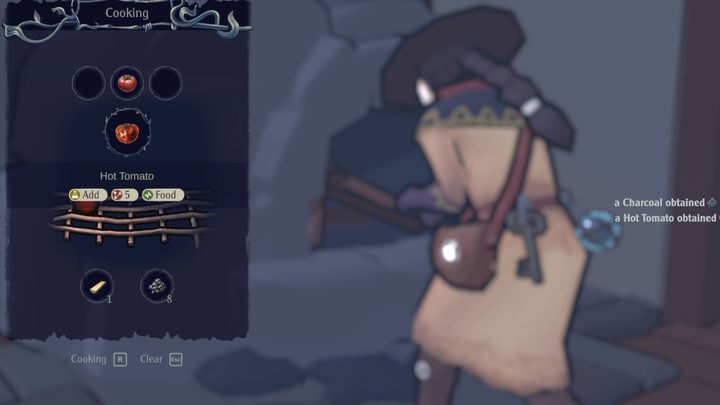 An additional method of obtaining coal is burning wood in the furnace while cooking: 1x Log -> 1x Charcoal. 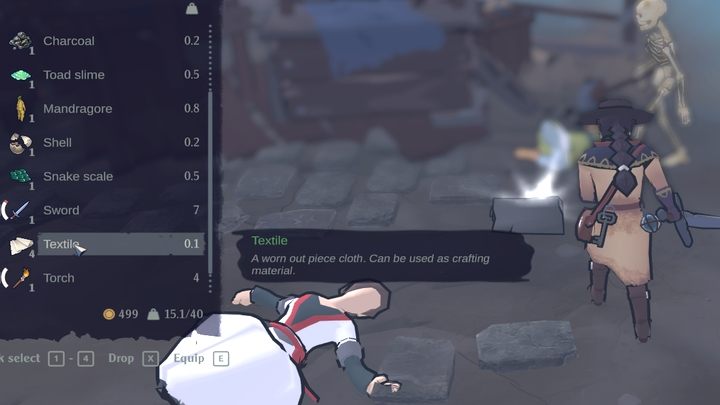 The easiest way to obtain Textiles is by robbing (or killing) humans who often have them in large quantities. You can also often find them in chests/barrels in the Wasteland and the Swamp. It's not a very important item though, as there aren't many blueprints that are using it (mostly torches). At a later stage, you will buy them cheaply from the Merchant. 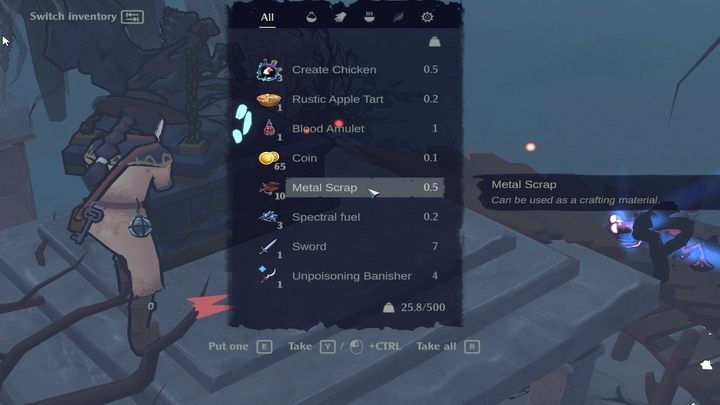 Metal Scraps can be obtained from people and skeletons by stealing or killing them, just like textiles. You will also find them in chests and barrels in the Wasteland and Swamp. They are fairly common and used in most tool and weapon blueprints. It is a good idea to collect large amounts of scrap every time you come across it.

Where to get: Wasteland (maze) by catching monster souls into Soul Eater 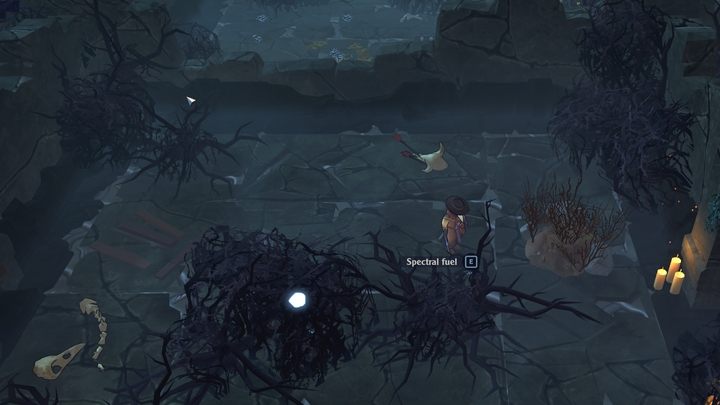 Spectral Fuel is a special substance that comes from souls. You can find it mainly in the labyrinth in the north of Wasteland, sometimes while exploring locations (e.g. in Moonchests), but the ray way of obtaining this ingredient becomes available a little later (after healing the tree in the Wasteland and visiting [after death] the Undertaker). 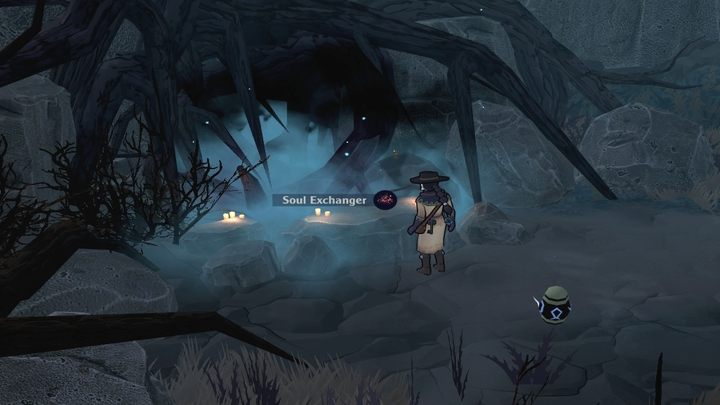 At the Undertaker, you will find an altar in the south - bring Corrupted Ember there (red and black stone, which you can sometimes find in Wasteland by destroying blisters) to obtain Soul Eater. 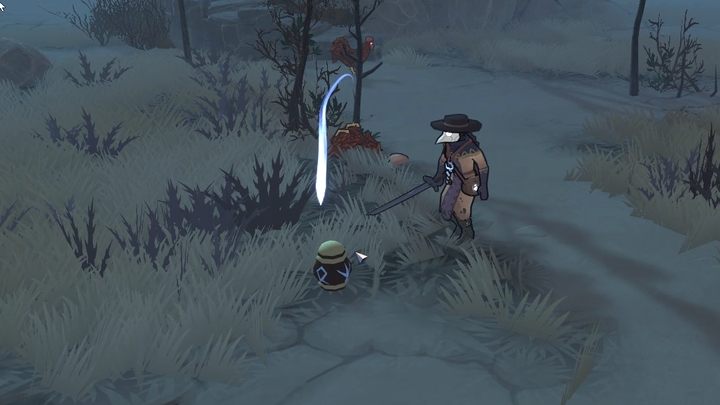 When you put it on the ground, every living thing you kill will fill the container with its soul. However, you have to collect it quickly or destroy it after it gets filled with a soul or it will start to run away. If you fail to catch it in time, it will turn into a medium-threatening demon. Defeating the demon will give you a small amount of Spectral Fuel (2-3). You will lose the Soul Eater. However, you can go for another at any time. 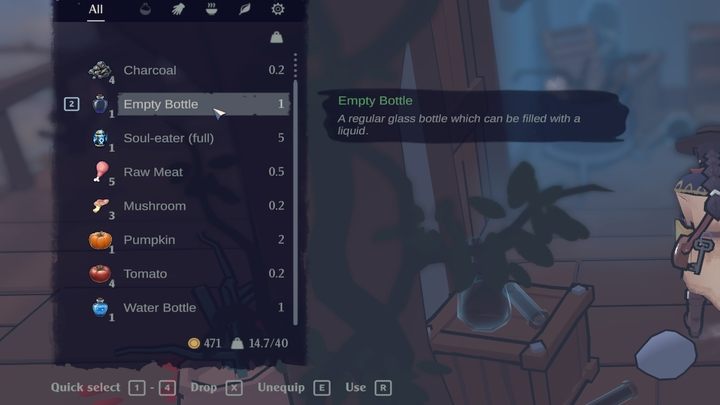 Empty Bottle can't be crafted. You need empty bottles for crafting - if you fill them with water, you won't be able to reverse the process. You will find them in containers, but they can also be purchased from the Merchant.