This page describes all of the Brewing Recipes available in The Serpent Rogue that you can create using the Portable Lab. You will learn what ingredients to combine, what effects individual potions provide or remove. Potions have an area effect when thrown.

You can read more about preparing them on the Brewing page. Here you will find a list of all the ingredients. 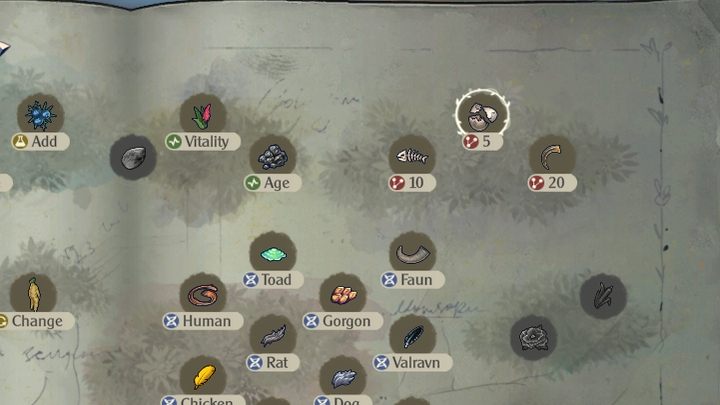 You should remember that the three ingredients - Shell, Fishbone, Claw - can be used interchangeably and they determine how strong the potion that uses them will be. This is how you create improved potions, where the base one uses Shell. The next ones have names with " "such as Healing, Healing, Healing depending on the "multiplier "used. Each is treated as a separate recipe - however, below, we described the basic Shell-based versions.

(Morph) potions allow you, your allies or opponents to change form, provided they do not have morphing Immunity. If you morph into a non-human form, you cannot use weapons (but you can drink healing potions straight from the inventory). This transformation is permanent - for the hero, it is until death, or until canceled with the R button. You can turn your opponents into other monsters and defeat easier or for research (Bestiary pages), but their inventory remains the same: a hen turned into a Faun still drops a piece of meat or a feather. 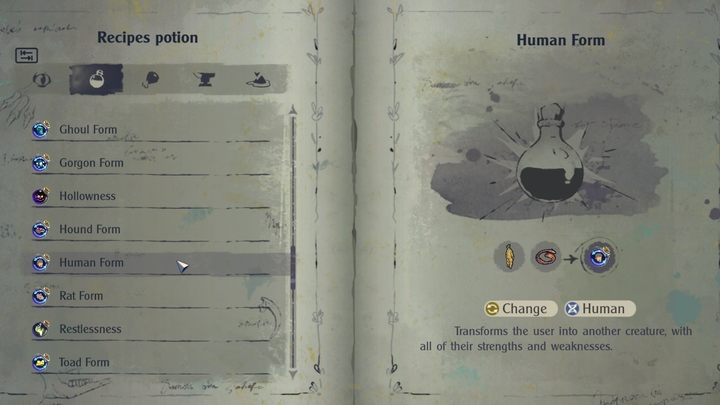 Potions of this type should be drunk or thrown at the target. To make them, you need the "Change" essence (Mandragore) and a part of the animal. There are 10 transformations, each requiring researched fragments of the monster you wish to transform into. The ingredients for each transformation can be found below:

You can find Mandragora in Wasteland. Animal fragments can usually be obtained with varying probabilities - kill or rob them. Not every form and age of an animal can produce a fragment, and not with the same probability - more information in the Bestiary.

Summon potions differ from transmutation potions in that instead of transforming an animal, they create it in the indicated place. The summoned creatures have the Imitative debuff - it means that the created creature will not stay with you forever; their lifespan is less than 5 minutes. They also have a second debuff: Soulless - lowers the maximum health level; you can remove this debuff with the Soulfulness potion. 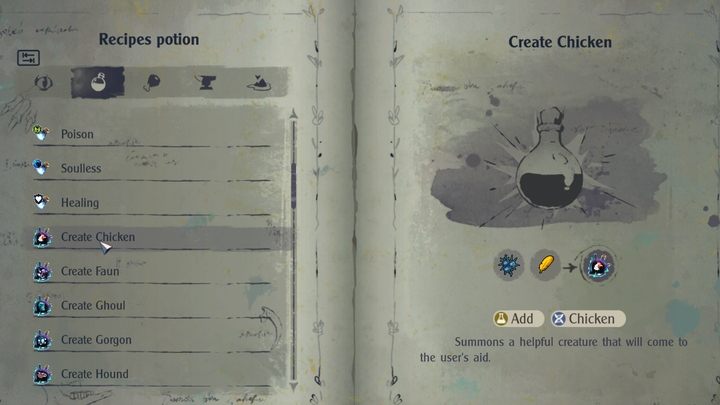 The monsters you create don't have any items in your inventory, so you can't use them to grind materials. However, you can research them to increase the progress of completing the Bestiary pages. You have to drink or throw the potion. Available combinations:

Berry appears in Camp. Animal fragments can usually be obtained with varying probabilities - kill or rob them. Not every form and age of an animal can produce a fragment, and not with the same probability - more information in the Bestiary. 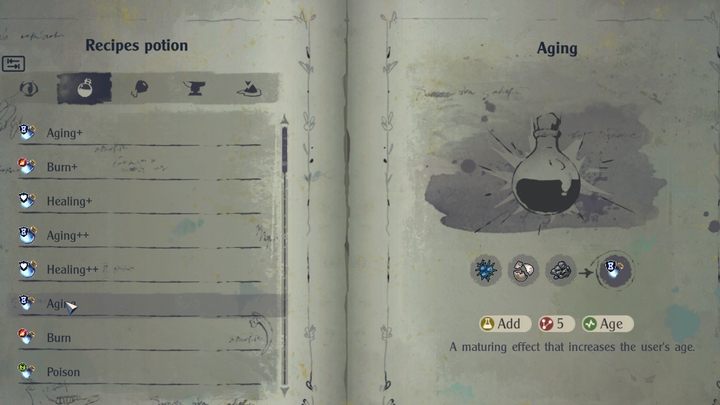 This potion increases the age of the hero or the creature by the indicated amount. Older units become stronger and often generate more loot. After exceeding the maximum age, the monster hero will become a Restless (skeleton). It has no effect on skeletons and enemies with Aging immunity.

You can check the current age in the character panel or by examining the monster. Age frames for monsters are shown in the Bestiary. 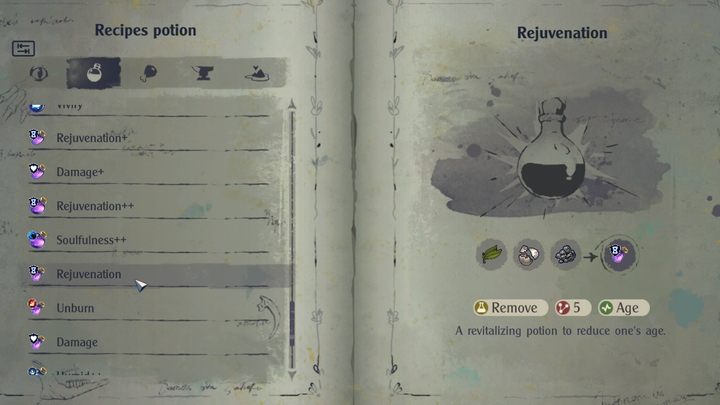 A potion that lowers the age of the hero or a monster. Younger individuals tend to be weaker than adults. It has no effect on skeletons and enemies with Aging immunity. The minimum age is 1.

You can check the current age in the character panel or by examining the monster. Age frames for monsters are shown in the Bestiary. 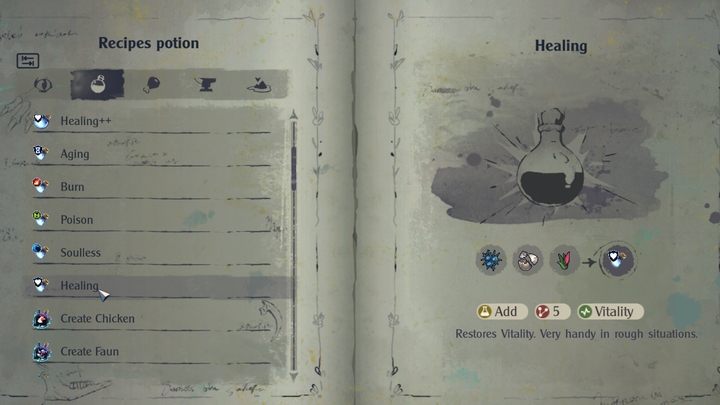 Basic health restorative potion, you can heal your allies by throwing a potion at them.

After transforming, you can use healing potions by opening your inventory and consuming it directly from there. 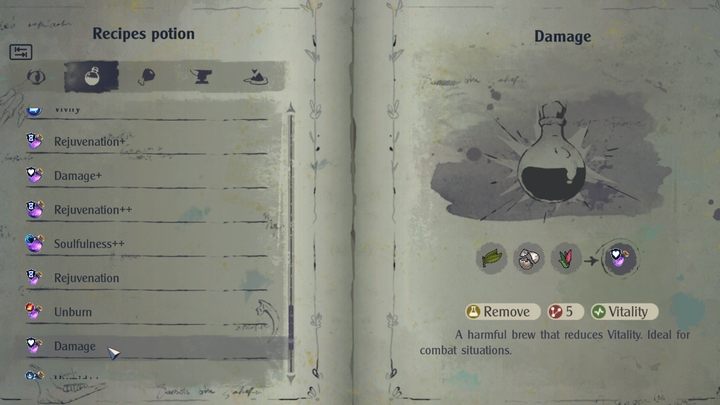 Potion that deals damage - takes Vitality. The most effective and cheap method of ranged combat. Just throw it at the target to deal area damage in a small area.

A potion that restores the green bar. It has the same effect as eating a meal. It's the only way to quickly feed your allies.

It causes the victim to starve. This slightly reduces its combat effectiveness and prevents passive health regeneration over a period of time. This potion can be useful to reduce the hunger level of animals that you want to tame but they have a full hunger bar. 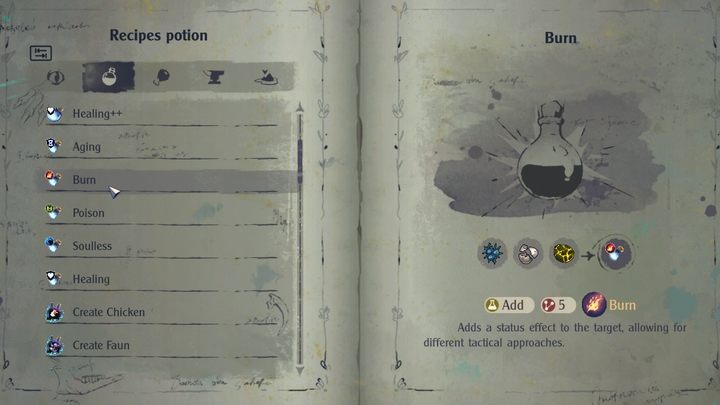 The potion inflicts the Burn status. It deals 3 Vitality damage to the target every 3 seconds. The component used - the "multiplier" - tells how many times the target will receive the 3 points of damage (how long will the Burn effect last). 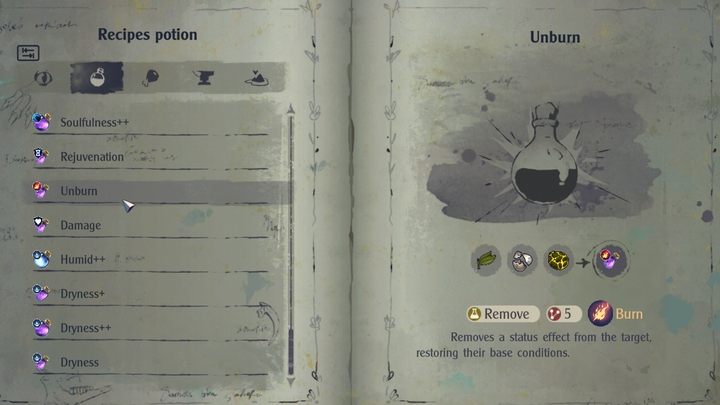 The potion heals the Burn status. 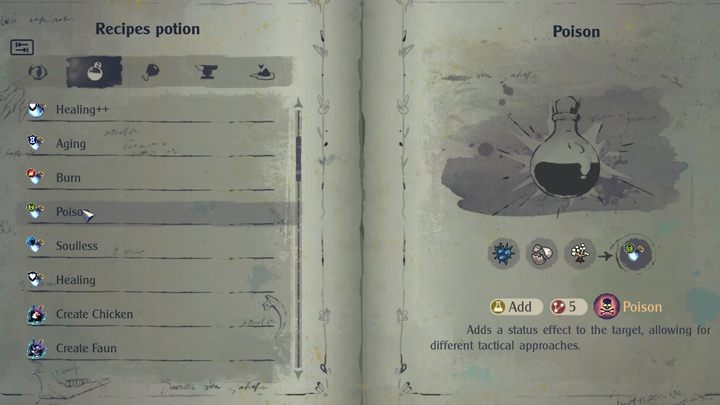 Inflicts Poison status. The "multiplier" determines the duration of the poison, but it deals 1 point of damage to Vitality every 5 seconds. 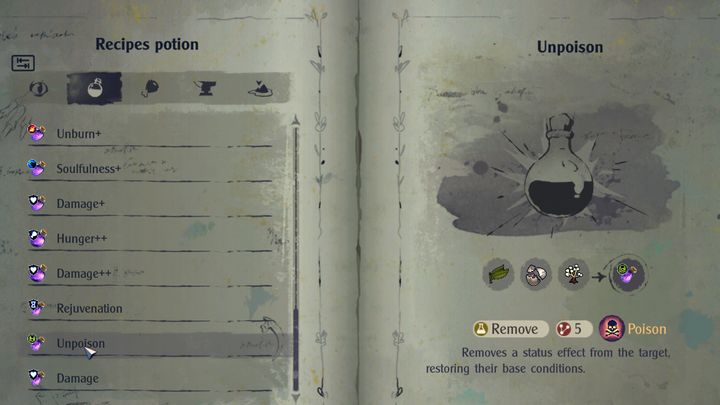 It negates the effect of the poison. 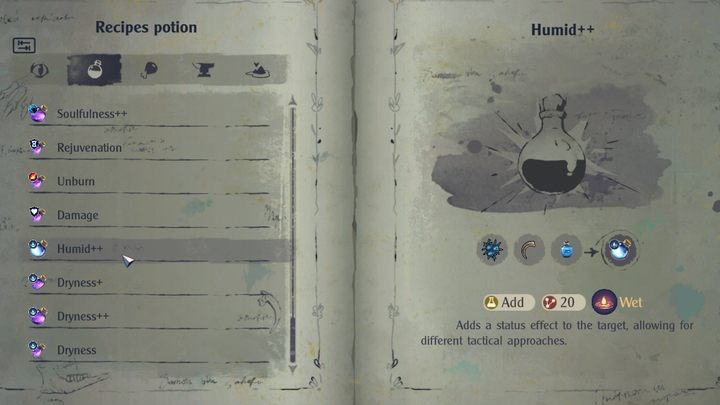 This potion inflict an enemy or hero Wet status, which can be used to extinguish fire or grant a debuff. 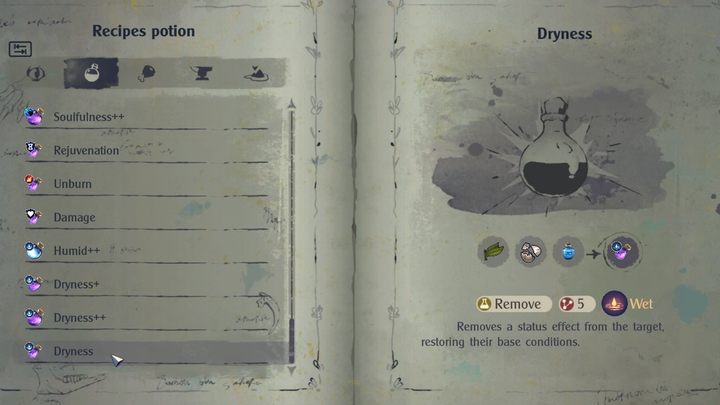 The potion removes the Wet effect. 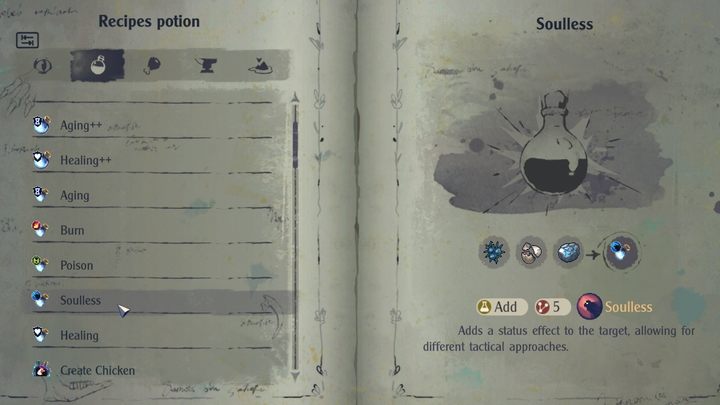 The potion grants the Soulless debuff. It lowers the target's maximum health until the effect is healed. 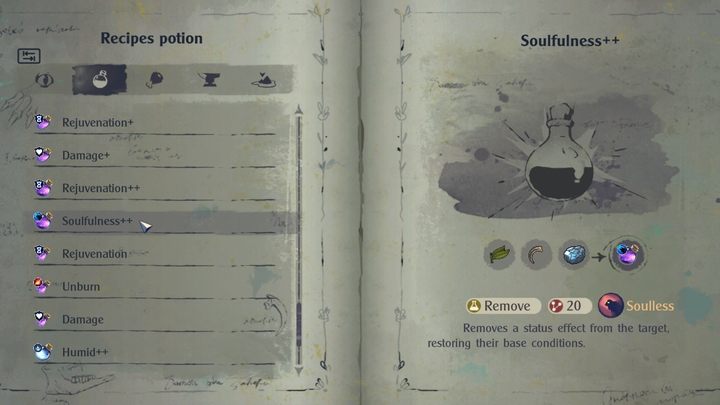 The potion heals the Soulless debuff, which often appears on created monsters and cheap recruits. 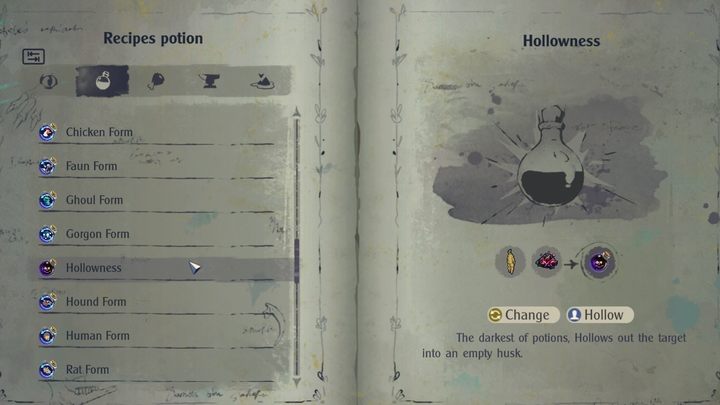 Unusual potion that instantly disintegrates the target - kills him and destroys the body. 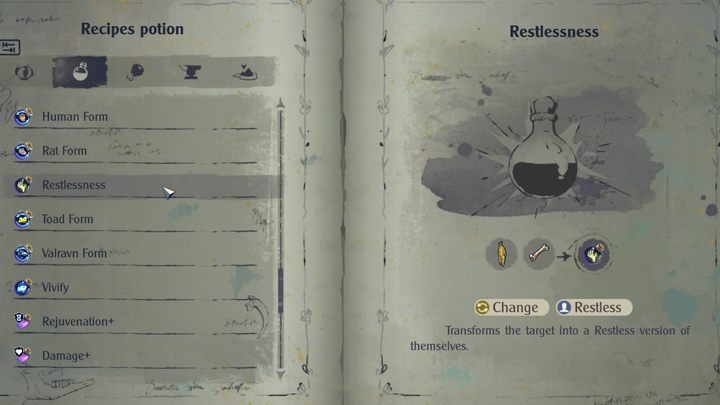 The potion causes the target to immediately go into Restless state - they become a skeleton. It does not work on opponents that do not have a skeleton form (information available in the Bestiary). 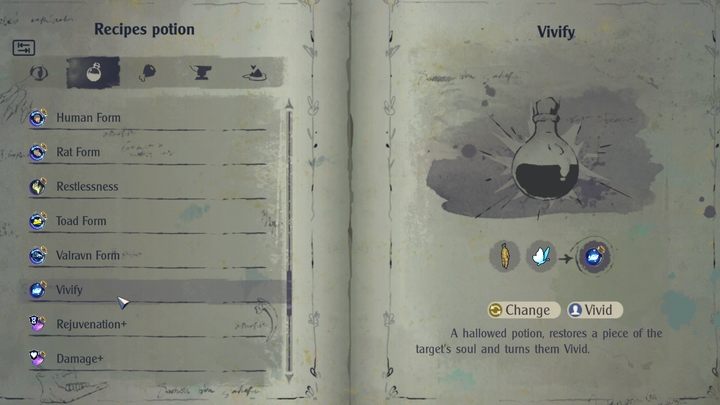 Recovery Potion - reverses the Restless effect, resurrects the dead (if the body was not destroyed/eaten after death, etc.) 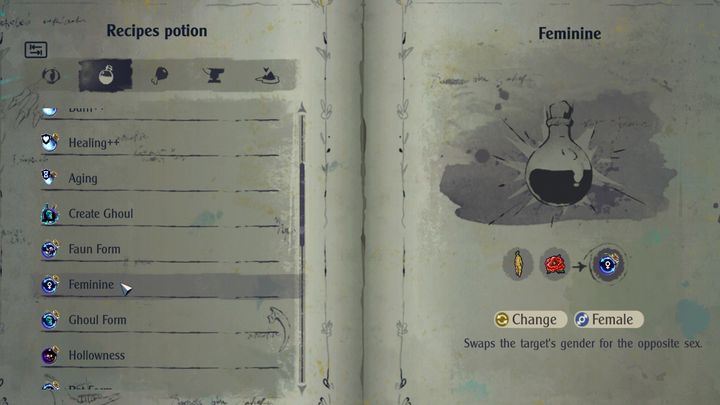 You can change your gender or that of others by using these potions. 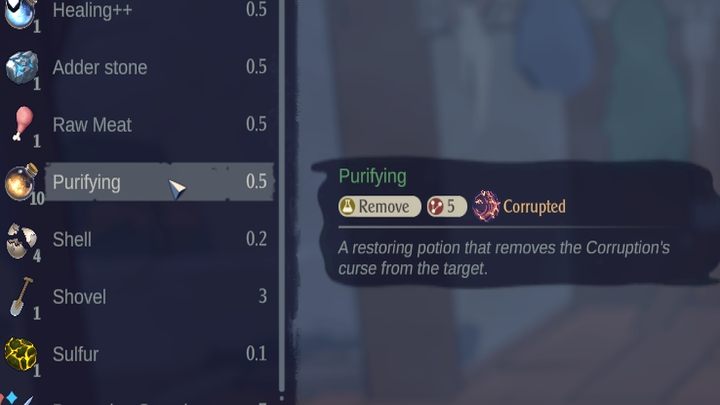 Purifying potions cannot be created. The only way to get them is to throw 100 coins into the well in Camp and break the Vessel to get 5 potions. The Purification potion has the form: Remove 5 Corruption.