This page of The Serpent Rogue game guide contains all the completed pages of the Bestiary from the journal. Here you'll learn how to battle and tame monsters, as well as their stats and immunities, favorite foods, and the loot they drop. 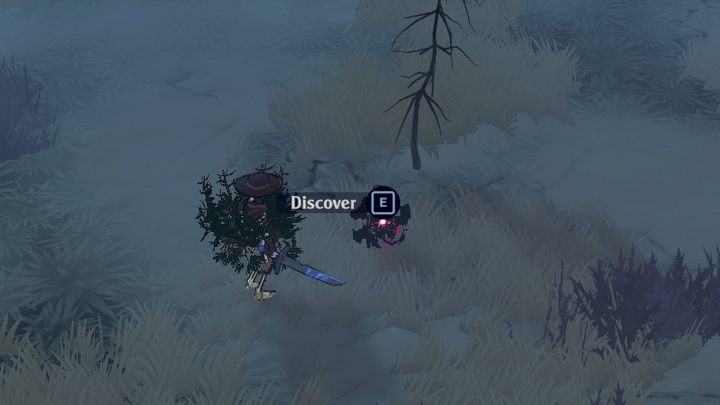 You can fill out Bestiary pages in your journal by researching animals and creatures. You can examine neutral units by approaching them and selecting the action button when the Discover option appears on the screen. In the case of opponents and hostile creatures, you can research them while camouflaged (as a bush or a rat) or after defeating them by examining their bodies. Unfortunately, skeletal animals are an exception, as their bodies disintegrate once you defeat them. Researching all species will unlocked the Curious by Nature achievement.

Each animal needs to be examined multiple times to unlock all information about it, including their favorite snacks (required for taming) and loot. 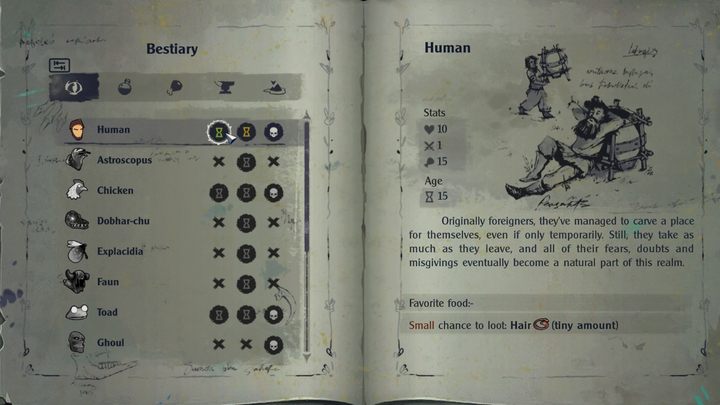 Humans are a common race in the game and the protagonist is human, as well. They have no special traits and they're neither strong or weak units.

Ability: they have the ability to wield tools in battle and use objects such as chests, crafting tables, etc. 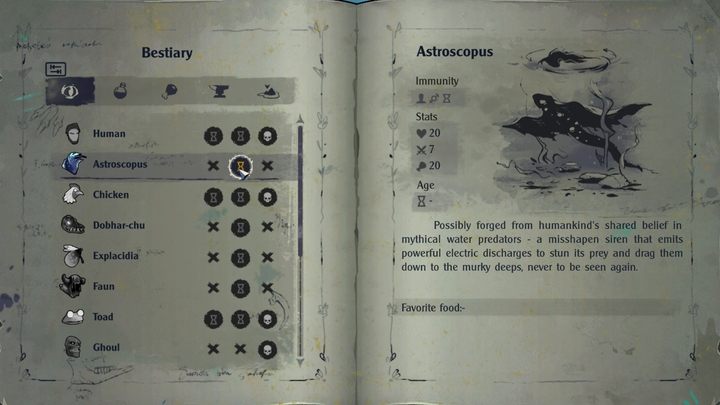 Astroscopus are creatures that live underwater in the Swamp. They're not especially noteworthy and don't drop any loot 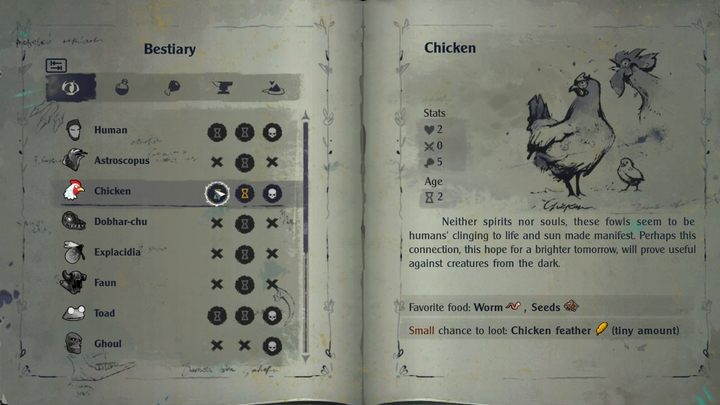 Chickens are native to the Wasteland. They are completely harmless and easy to tame. They have a very low carrying capacity. Chickens and roosters have different skills.

Note that only chicks can drop the feathers you need for research and potion making! For this reason, it's a good idea to use a rejuvenating potion to farm these feathers. 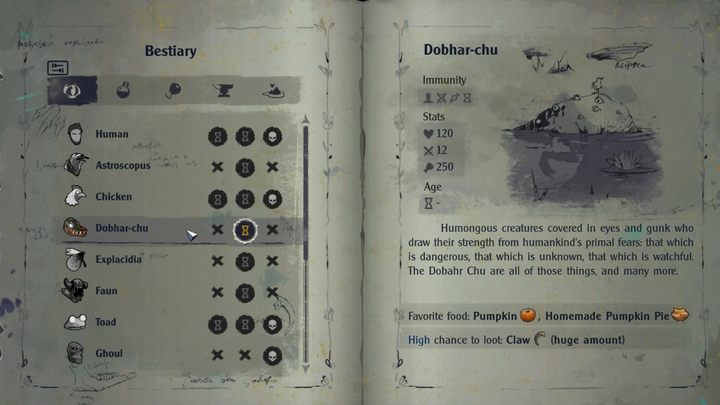 This monster fits in the boss category - they're the strongest monster in the game. They're strong and tough, but you're still able to tame them. They can be found in Dobhar-chu's Lair, located behind the Swamp. You might find two of them instead of one, and at times they may be joined by Toads. They don't drop loot that could enable you to morph into this creature. 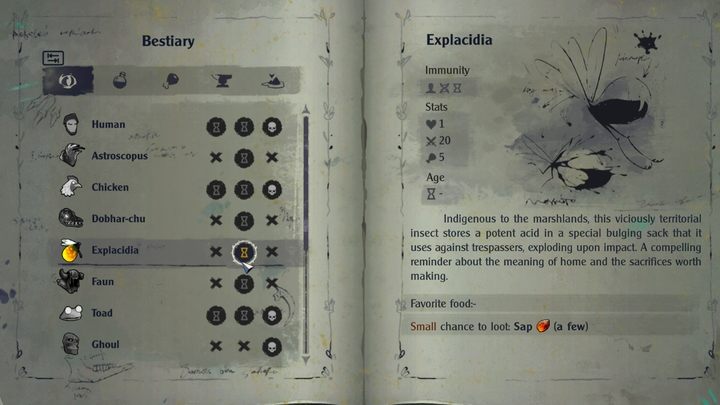 Explacidia are mosquitoes that live in swamps. The green ones are usually calm, while the red ones are aggressive - despite their low health, their attacks are surprisingly powerful. They can be found in the Swamp. They drop Sap (a Food item).

Ability: explosion after attack, strengthens allies after the explosion automatically. 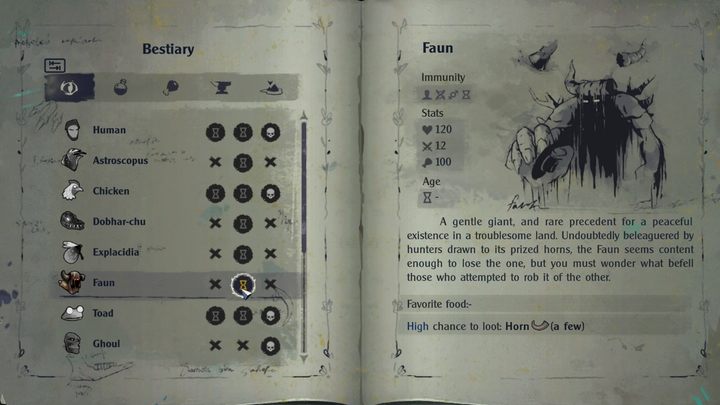 The faun can be found in the west of the Wasteland. They're a formidable foe, so if you want their loot - the Horn - pickpocketing is a better option than fighting them. They are often accompanied by groups of chickens. Due to its size, Faun can assemble many highly placed instructions. They're a great follower to tame in the early game or to morph into because they have numerous immunities.

Ability: The faun can perform a powerful, charged AoE attack. Additionaly, a Faun can destroy trees when you turn into it which helps a lot in obtaining this resource. 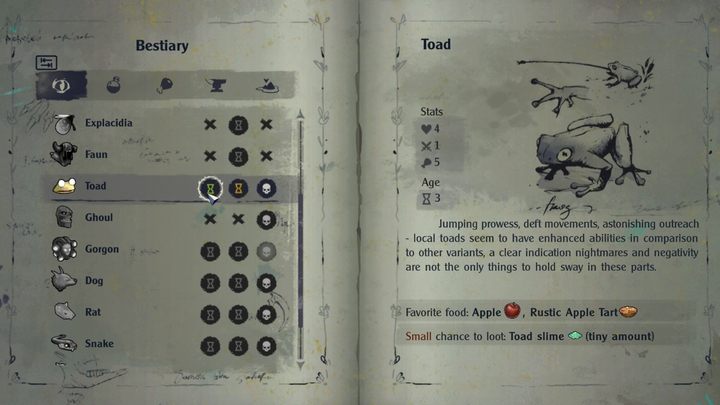 Toads can be found in the Swamp. They can also accompany Dobhar-chu in its lair. They're far from strong, but toad morphing potions can be pretty useful. You will be able to effectively catch butterflies and collect otherwise inaccessible recipes from high places. 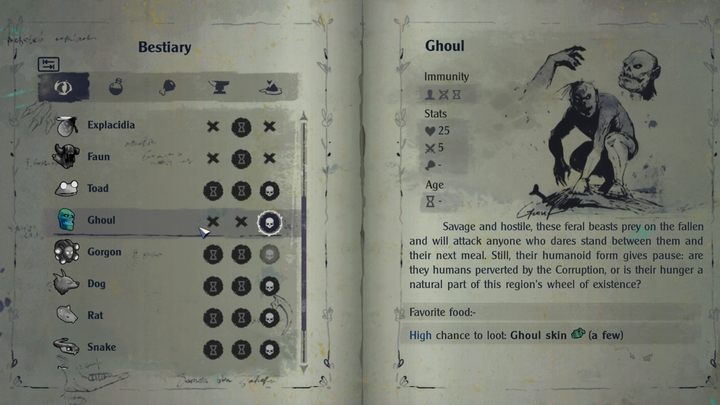 The undead Ghouls are formidable foes, so it's a good idea to convert them to your side in the early game (Ghoul Skin is sometimes dropped by humans with Corruption status in the Wasteland). They can regenerate health by eating corpses. Note: as followers, they can sometimes get in your way by consuming monster corpses before you have a chance to research them.

Ghouls will also appear in areas with at least 5 corpses (not counting skeletons), which can be used to lure them.

Gorgon is an optional enemy that can only be found in its lair. You can tame it. 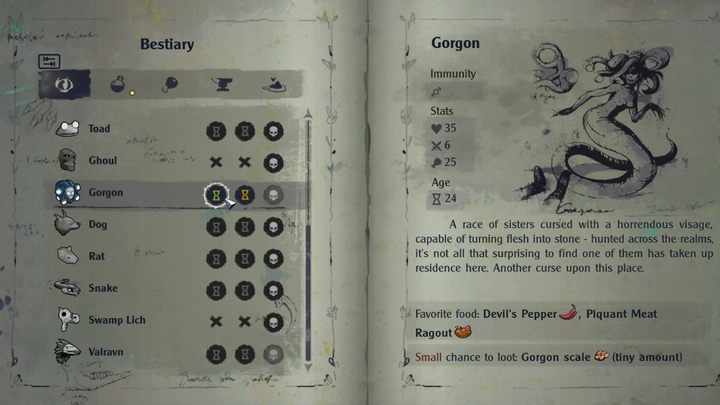 The gorgon is an unusual, if not particularly strong, monster. They can be found in the Gorgon's Lair behind the Wasteland. They can be quite challenging whenever they are assisted by snakes. On the other hand, you can transform and tame them.

Ability: an AoE attack (frontal) which immobilizes and turns into stone. 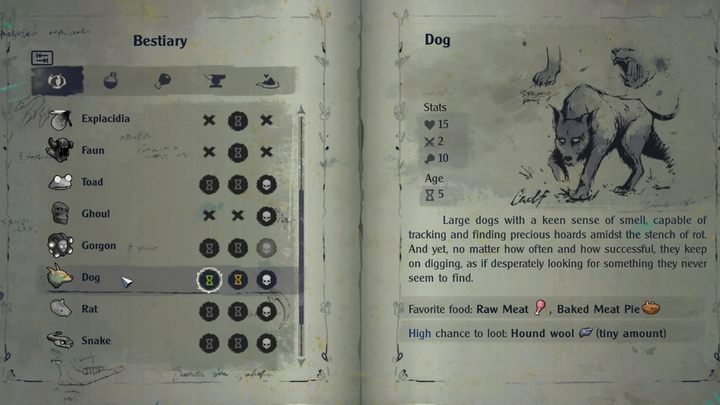 Dogs are mainly found in the Wasteland. These are simple animals that are easy to tame.

Ability: can inflict enemies with the Wounded status effect, which damages them as they move. 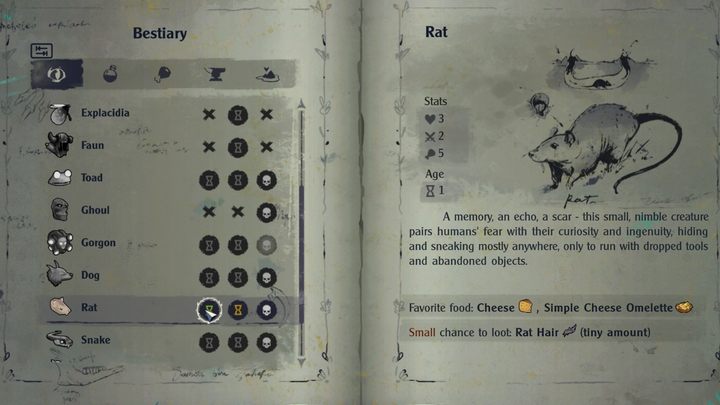 Rats are most frequently found in the Wasteland. What makes them unpleasant is that they enjoy stealing from the main character. To achieve this, they camouflage themselves, becoming almost invisible.

Ability: camouflage, which allows you to research and steal. It's cancelled by touching water and upon being attacked. You cannot use camouflage while in skeleton form. 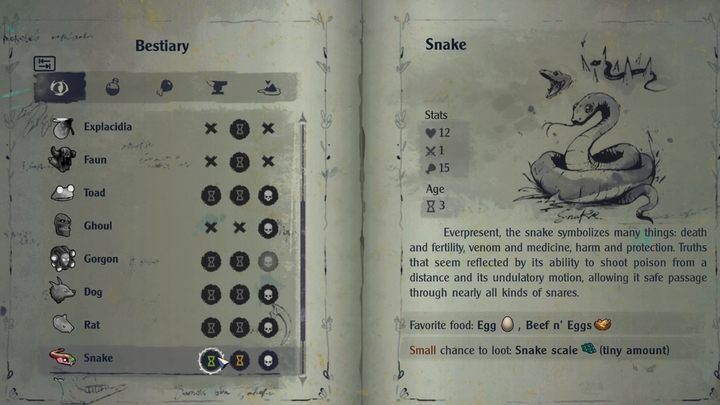 Snakes are found in the Swamp and accompany the Gorgon in the Gorgon's Lair. They aren't hostile in the swamps, but they can be unpleasant to deal with - they are very mobile, making them difficult to hit. Additionally, they can launch poison at range, which deals damage over time. They make good followers since they have a high survival rate and can divert opponents' attention away from you. 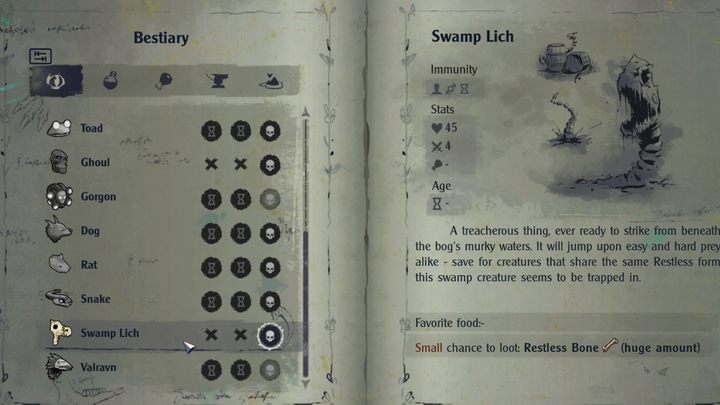 The Swamp Lich is an unusual creature that can be found in the waters of the Wasteland. It won't attack you if you are in Restless form. They have no special features (apart from the fact that they can hide in the water and appear elsewhere) and it's best to avoid fighting them, because they has a lot of health for an early game opponent. Eliminating it is a good way to collect Restless Bone - this enemy drops them in large amounts.

To research this species, use the Restless form - you will not be attacked in it. 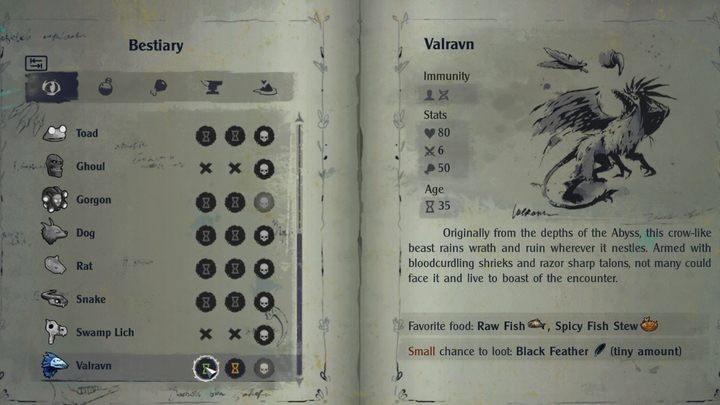 You will meet Valravn in the Swamp (in the north - regular, in the east, beyond deep water - Corrupted) and as the boss guarding the tree in the Wasteland. They are formidable opponents with exceptional agility, particularly as adults.

Ability: an AoE attack, during which they leap into the air. They age their targets instead of damaging them. This can sometimes be detrimental, as certain monsters become stronger as they age. 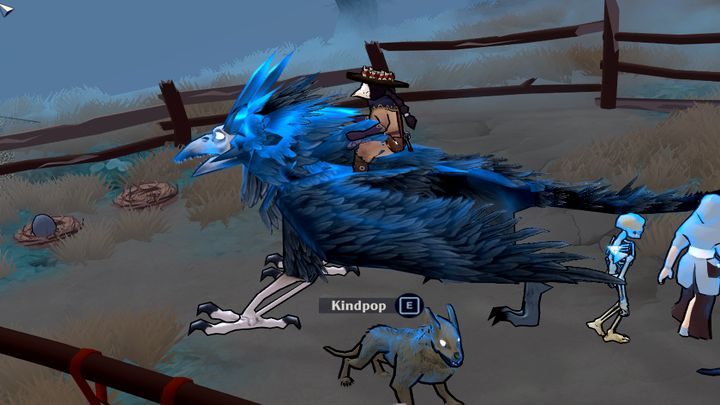 An additional interesting fact is that you can ride Valravn and perform the basic attacks. 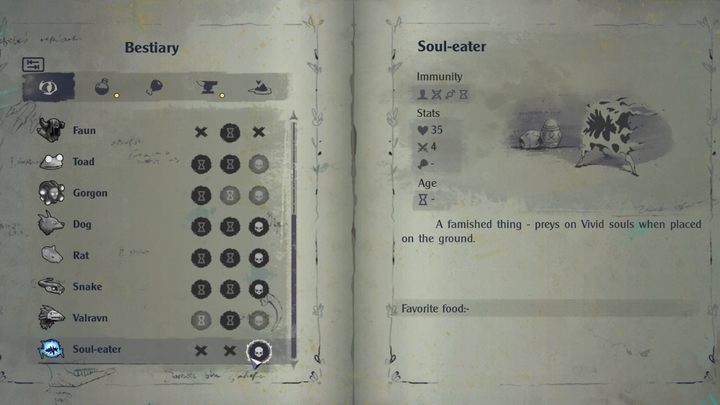 Soul Eater are monsters that live in the maze in the north of the Wasteland. To research them, use a bush and a torch, and enter the labyrinth. They will also appear when you use the Soul Eater container to trap the soul and do not catch/destroy it in time.