Character development and choosing the appropriate build in The Outer Worlds is extremely important. Investing in chosen skills and perks determines your style of play - melee weapons, ranged combat, stealth attacks, or emphasis on persuasion and peaceful conflict resolution. This page covers all aspects of character development in the game. You will find out how many skill points and perks you get for reaching a new level, as well as all the skills and perks available in The Outer Worlds. 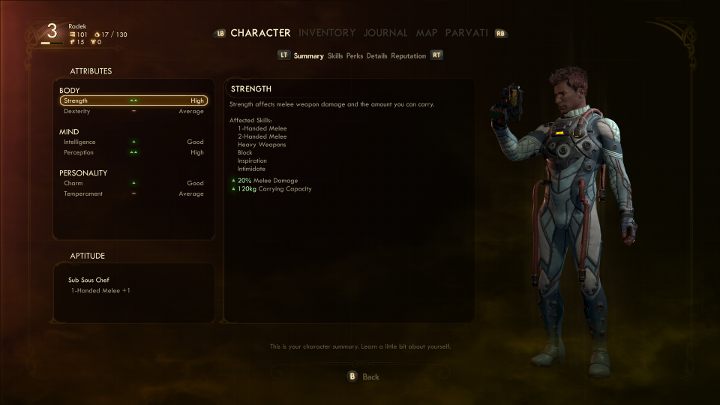 The most important information about your hero can be found in the character summary screen.

The information below will familiarize you with the leveling up system and will tell you what happens when your character reaches the next level. 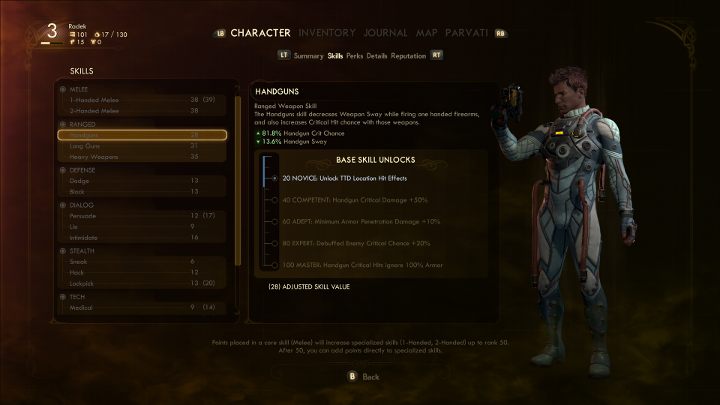 Skills are divided into several categories.

The table below has detailed descriptions of all skills in The Outer Worlds, along with special rewards:

Increases the chance of a critical hit with a one-handed weapon.

Reduces weapon sway with handguns and increases the chance of getting a critical hit.

Reduces weapon sway with shotguns and other heavy firearms, and increases the chance of getting a critical hit.

Increases the distance the character travels while dodging and also shortens the duration of harmful state effects.

Persuade is used in conversations and gives a chance to cause a paralyzing fear in a human enemy after performing a first attack.

Lying is used in conversations and gives you the ability to cause Scramble effect (enemies attack their allies) onÂ Automechanicals attacking you.

Intimidate is used in conversations and gives you a chance to cause Terrify effect (enemies briefly escape) in nearby creatures after killing one of them.

It reduces the player's detection range while crouched and makes the NPCs looking for the player to return to normal alertness levels faster.

Reduces hacking time and the number of bypass shunts needed for hacking.

Reduces the lockpicking time and the number of required Mag-picks.

Reduces the number of parts, armor and weapon parts needed to repair equipment.

Increases the maximum number of strength points of the player and companions. 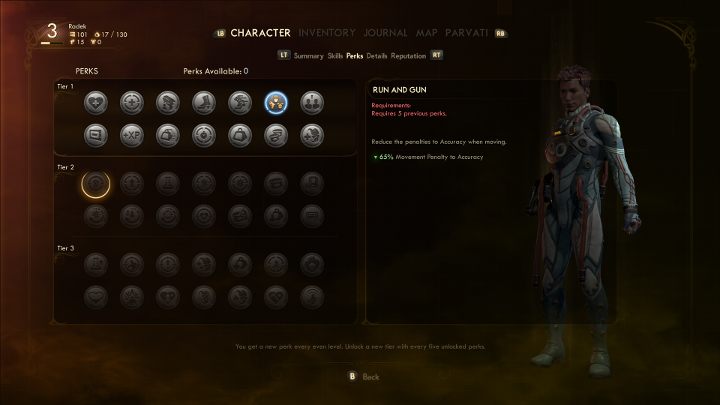 Perks are placed in three tiers.

The following tables contain all the perks in The Outer Worlds, along with the division into tiers: