This spoiler free chapter of our guide to The Last of Us 2 contains a walkthrough for the Hillcrest location where Ellie hopes to find Tommy. 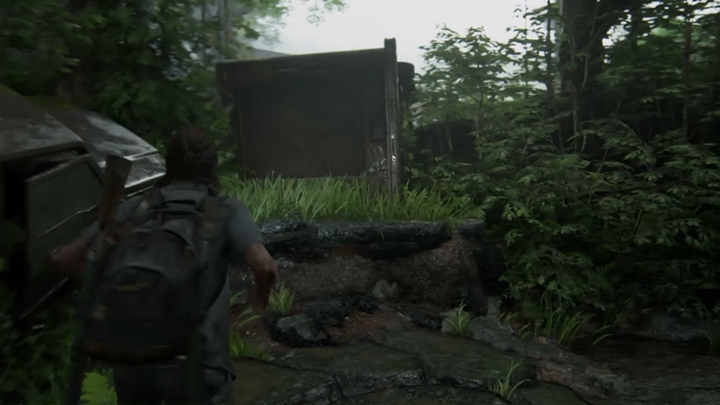 Talk to Dina - you will find her at the top of the theater. Then you go to Hillcrest to find Tommy. You will hear gunshots in the distance - go in their direction. Before you go further, you can, e.g. search the nearby buildings. 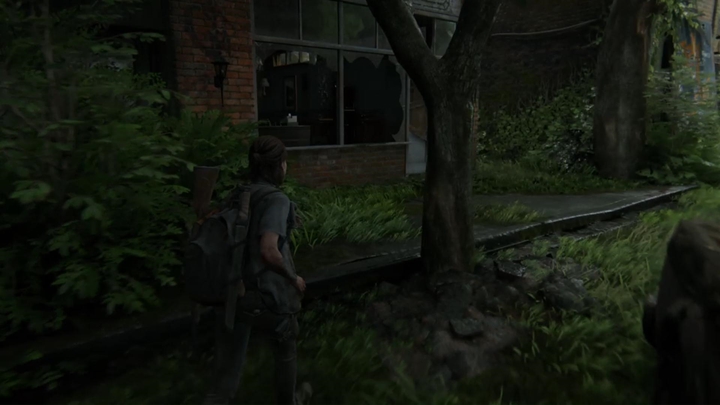 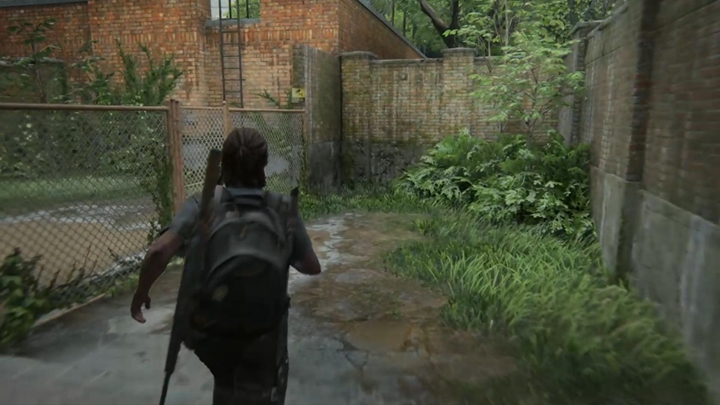 Enter one of the buildings and then reach its back - you will find a ladder that you can climb to the roof. 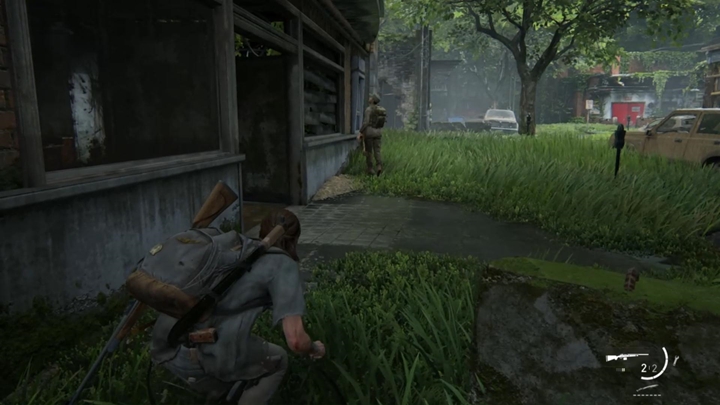 You will reach an area patrolled by a wolf squad. What's new is that one of the soldiers has a dog that can, e.g. smell you. When you activate Ellie's sight mode, you will see a scent trail - when a dog comes across your scent, you will need to change position quickly. You can, for example, enter the water to remove the smell. 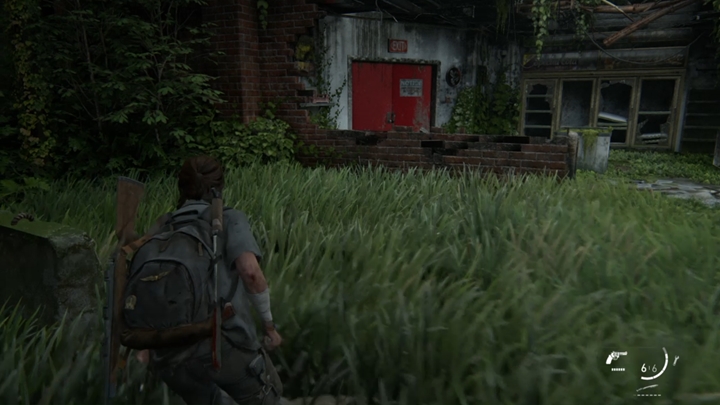 You can avoid enemies, although it is much safer to eliminate them quietly - e.g. set up a mine trap to eliminate the dog tracking you. You can kill the rest of the enemies by, e.g. using the tall grass and numerous creeks between buildings to get behind their backs. Your goal is to reach the big red doors that say Exit. 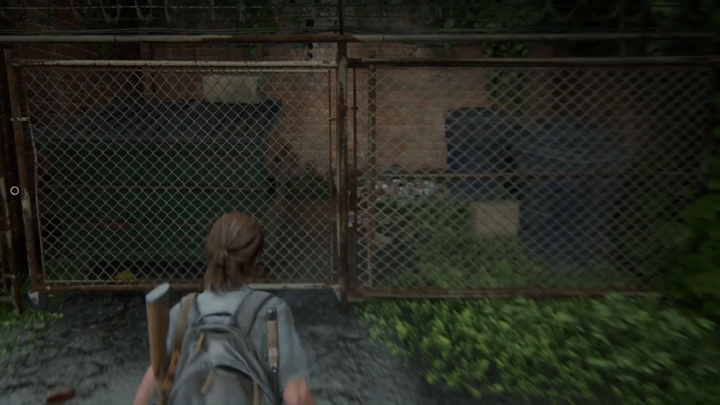 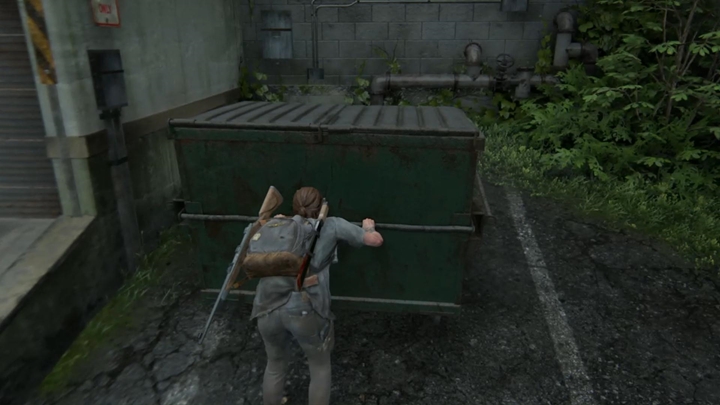 You get to a square where you can approach the gate. Open it and you will gain access to the green container. Move it past the garage, set it up and climb it to reach the garage roof. 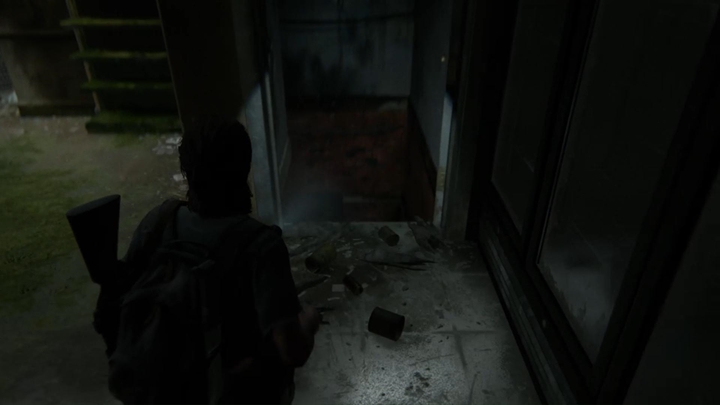 Now jump down to the basement, where you will hear a Shambler in the distance. Kill the enemy with, e.g. the shotgun (or use stealth if you want to avoid confrontation) and go up the ruined stairs to the top. 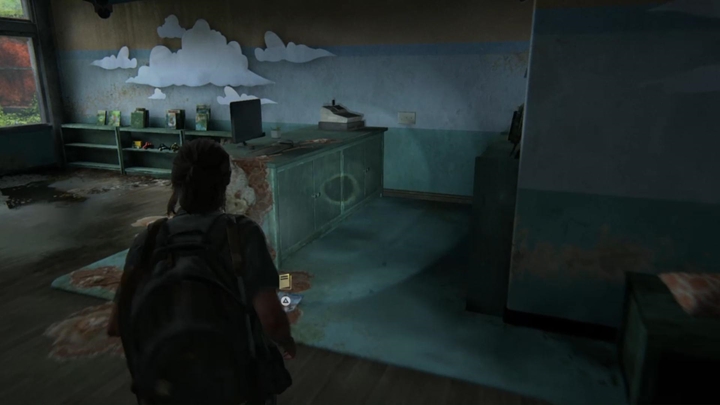 Along the way, you come across a magazine that unlocks the Precision skill tree for Ellie. It can e.g. improve your accuracy and stability while shooting. 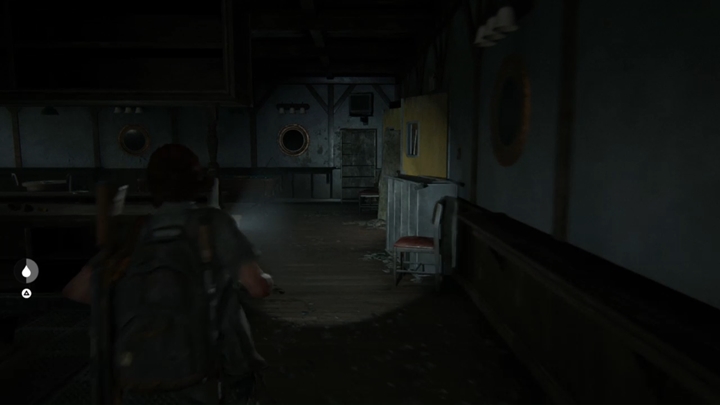 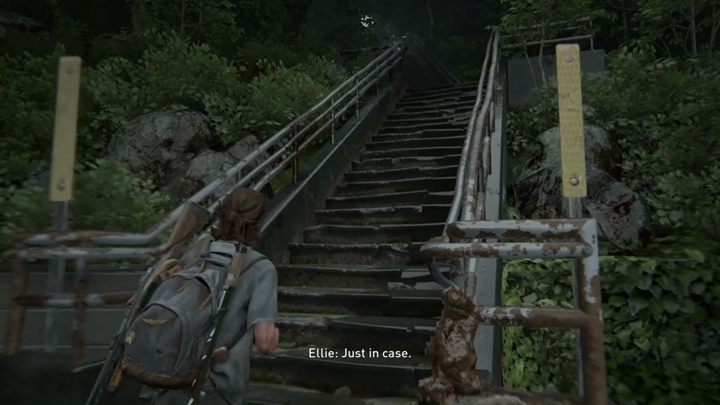 Outside, you will find two runners you need to kill. Your job is to break through the nearby bar which has a Shambler and a runner. Go to the back of the bar and then take the stairs up. 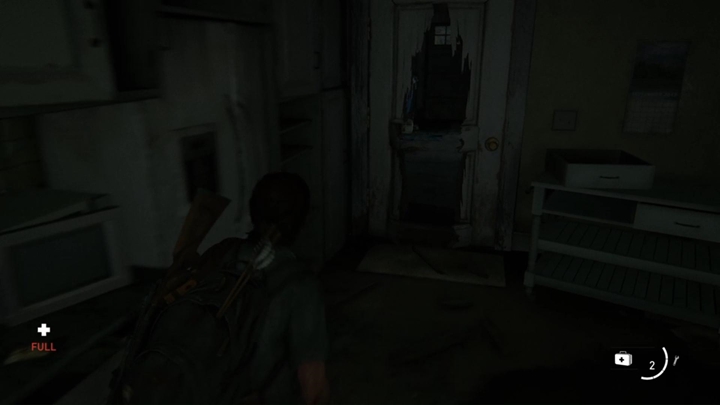 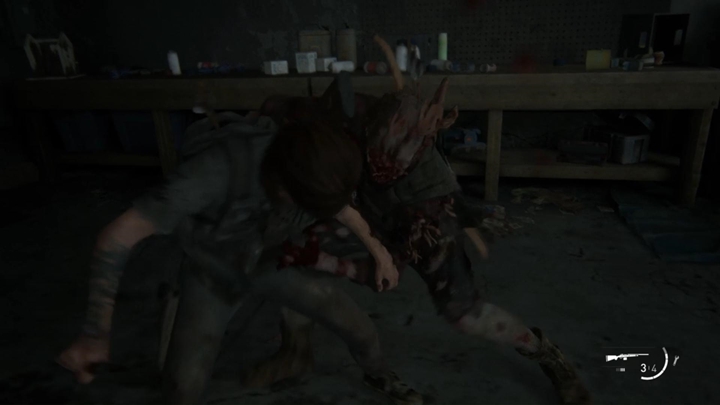 You will see black smoke - go towards it. Along the way, you will come across three runners. After the fight, search the surrounding houses - one of them has shattered door. Go through it and you will be attacked by a new enemy - stalker. This enemy is the next mutation level. The opponent is quick, can dodge, and is more dangerous in melee combat. Dodge and try to eliminate him quickly. 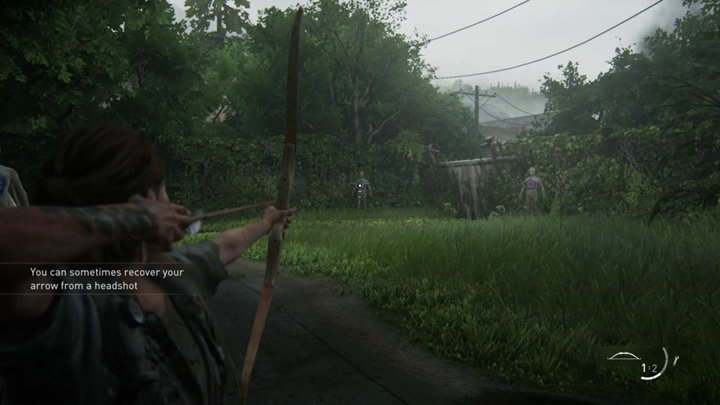 As a reward, you will get a bow. Go outside and practice shooting. Remember to take arrows from shot targets afterward. Jump over the fence and you will come across another wolf patrol. 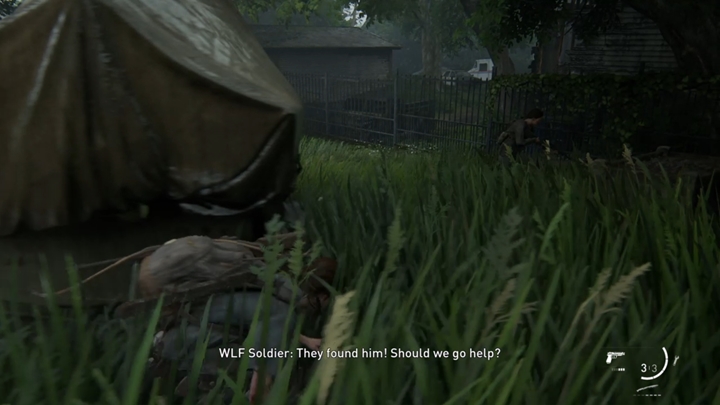 Start this encounter by remaining undetected. Try to eliminate the lone woman - leave the man with a dog for later. 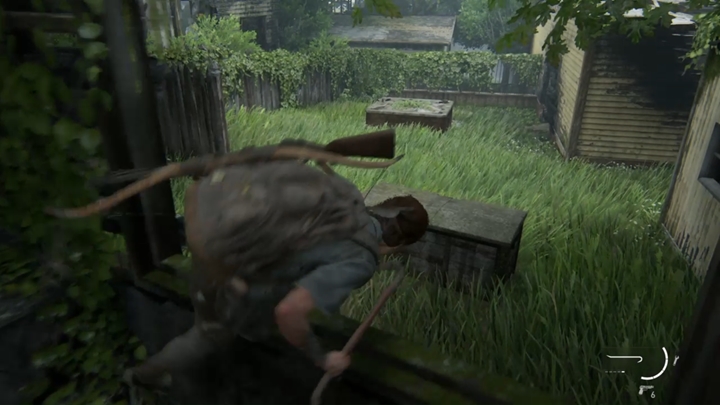 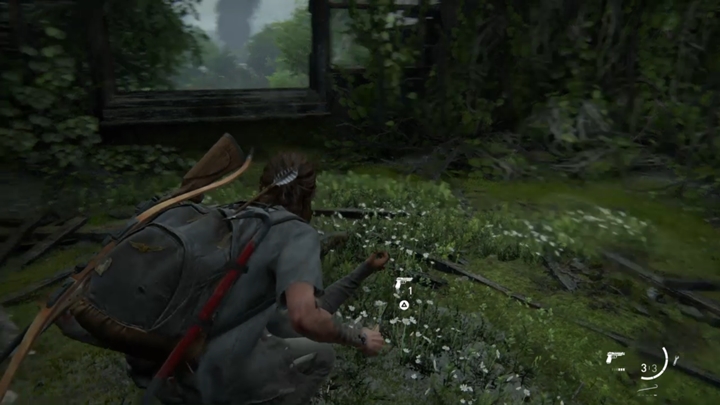 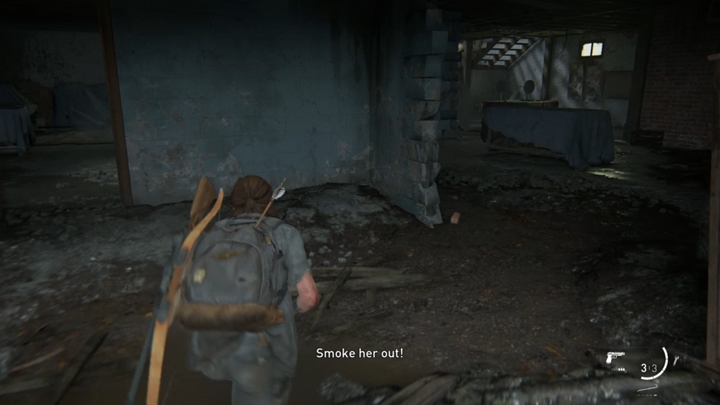 It's going to get worse here because the dog will detect you almost immediately. Jump into the dilapidated building - two wolves with melee weapons will attack you immediately. It's good to prepare for this by having the shotgun equipped or by placing a mine in the passageway. After killing them, you can continue to sneak - eliminate the next guard. Then go up the stairs, kill a woman charging at you with a machete, and jump out the window. 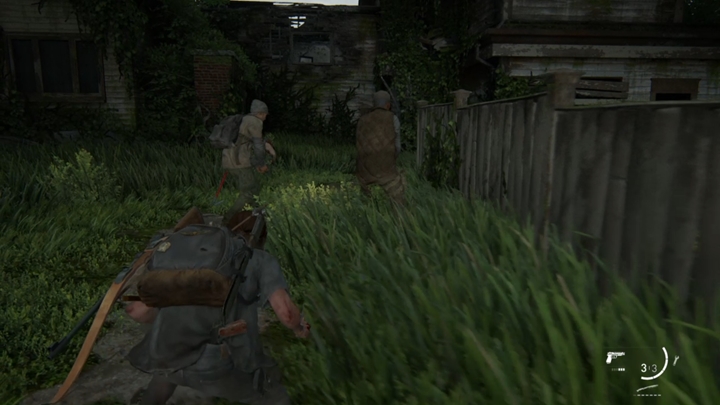 You come across Jesse, who has set out to help Ellie and Dina. Come out of hiding and hide near Jesse. When the boy runs to kill one of the guards, follow him and quickly kill the other guard. Now, wait for the next two to start searching, sneak behind their backs, and again, kill them together with Jesse. 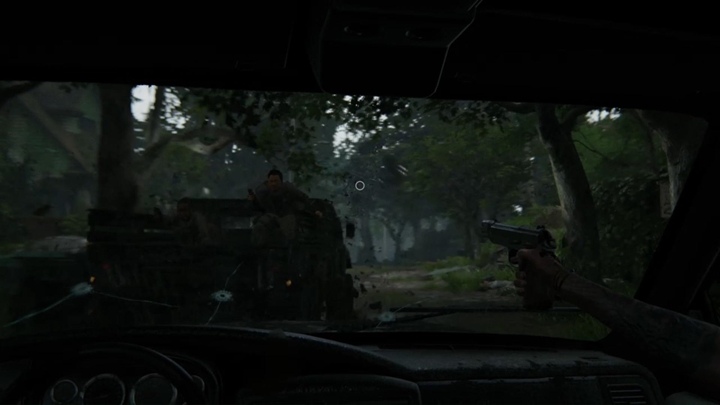 Jesse gets car keys. Follow him and then get in the car. The vehicle won't start - shoot the guards located at the rear. When one of the thugs grabs the man, press the Square button to free him. Another car will be chasing you - keep shooting it, and when it gets close, shoot the driver. 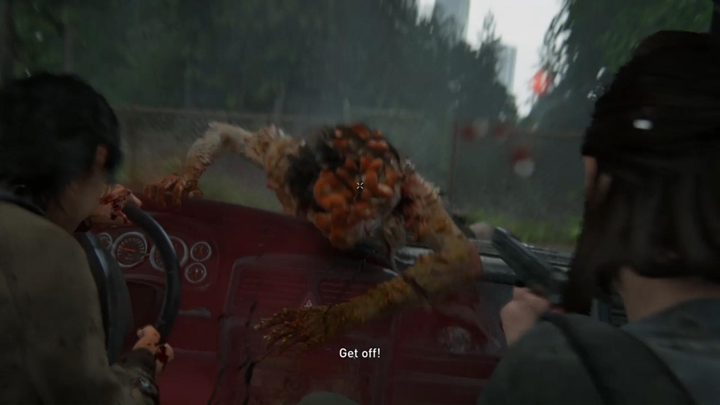 After a while, an army of mutants will arrive. Shoot at those who are close and are able to grab the car. When the car lands in the water, you will see a cut-scene.