This page of the spoiler-free guide to The Last of Us 2 has a list of all the secrets of The Coast stage. It is one of the missions of the Seattle chapter, Day 1 played as Abby. Traditionally, many secrets have been hidden in places you don't usually look at during a normal playthrough. Read the descriptions in our guide carefully.

There are 9 secrets in The Coast mission: 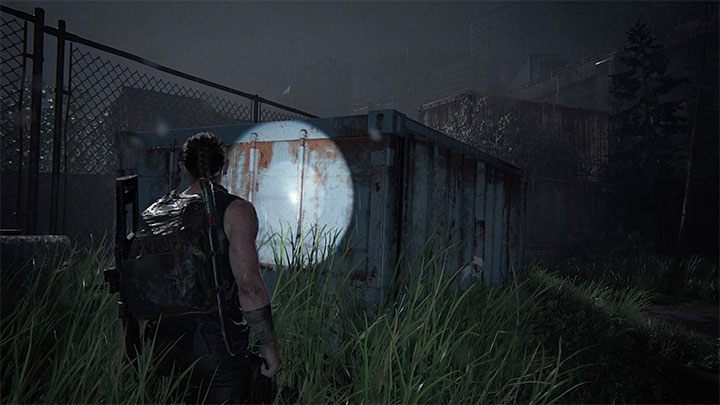 You can find a workbench shortly after the stage begins. Abby has to climb onto the container shown in the picture and then jump over the fence. She will then reach the interactive door. 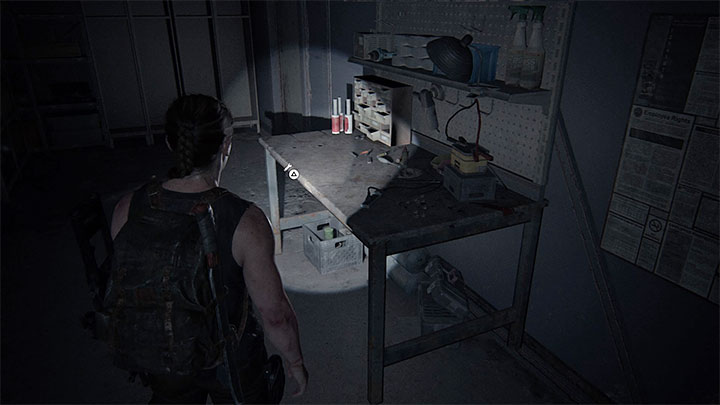 The workbench is located in the first room. 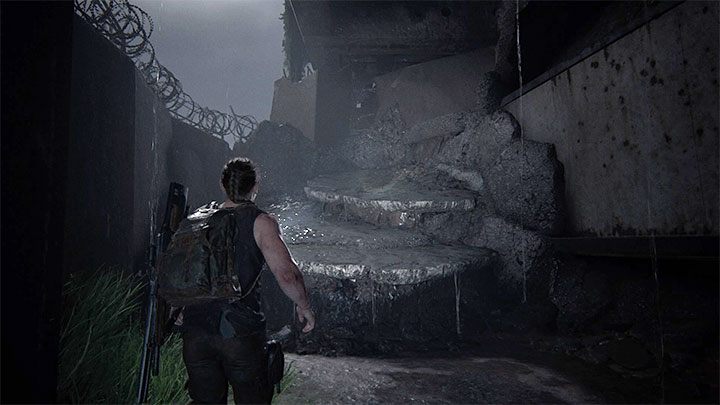 You can find the secret right after you've completed the short climb shown in the picture. This happens shortly after dealing with a group of infected people in the area with containers. 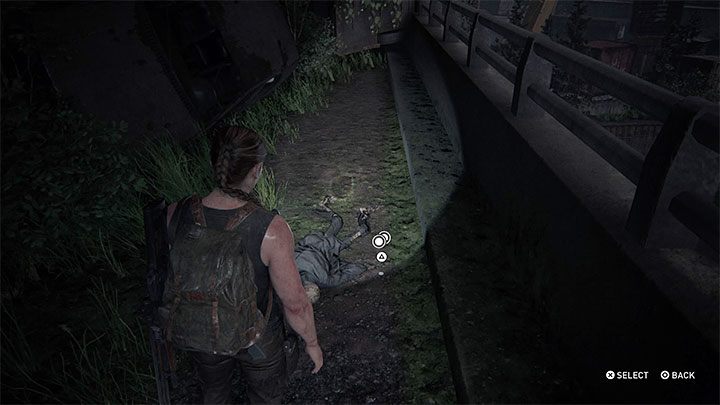 After reaching the top, turn around and reach the corpse shown in the picture and pick up the coin. 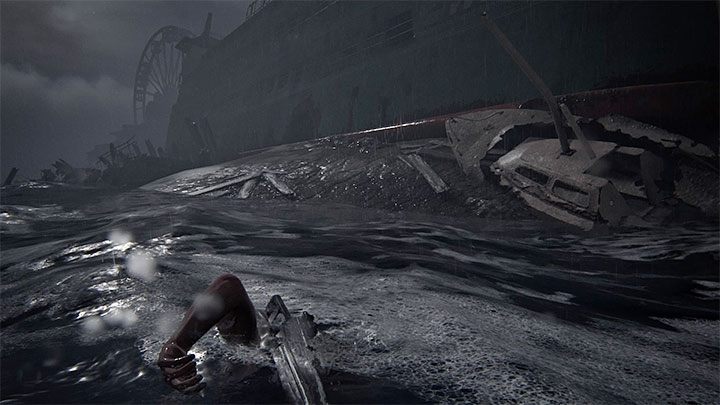 This is an artifact and is the first of many secrets found on board the wreck shown in the picture. Abby reaches the wreck and starts exploring it. 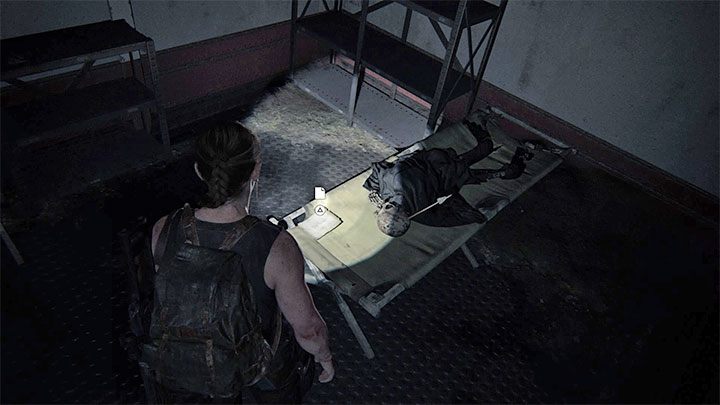 The collectible lies on a metal bed in one of the first few cabins. There's a dead body on the same bed with a bolt stuck in it. You'll get the secret before Abby gets a crossbow. 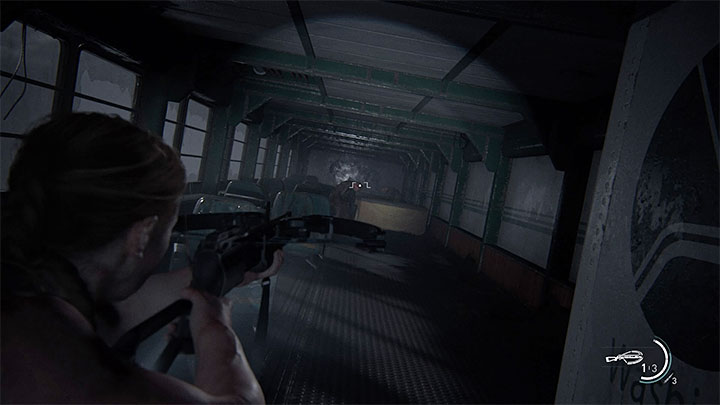 You can get this artifact soon after Abby finds a crossbow on board the ferry. After getting the crossbow head straight and be ready to eliminate a few infected. 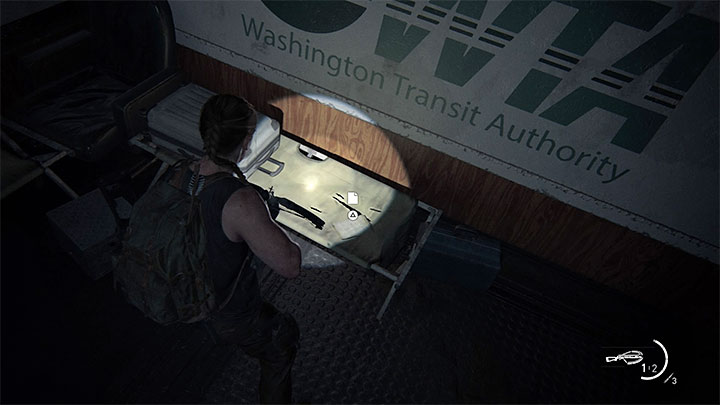 The document lies on a metal bed. It contains a combination to the safe, which is described later on the page. 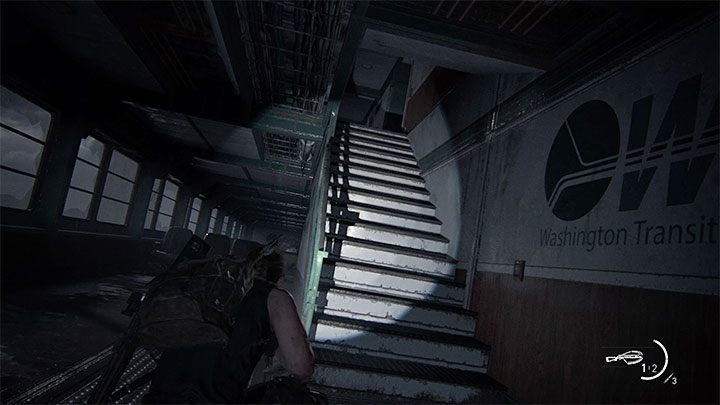 In order to get to this secret, you have to use the stairs leading to the upper deck of the ferry - do this after getting the crossbow. 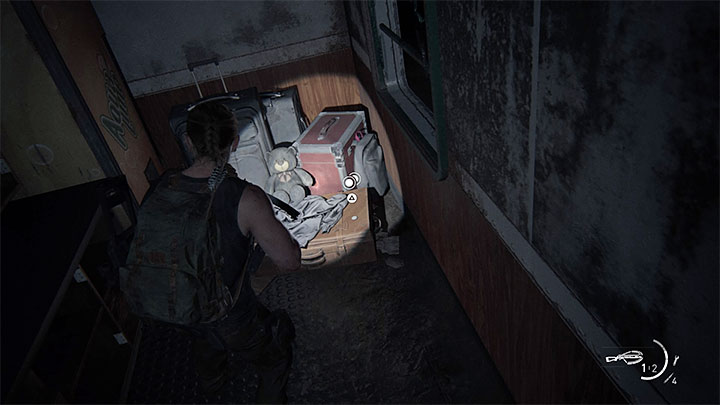 Examine the entire deck thoroughly, specifically the area on the right side. The coin is at the end of one of the corridors, next to suitcases and a teddy bear. 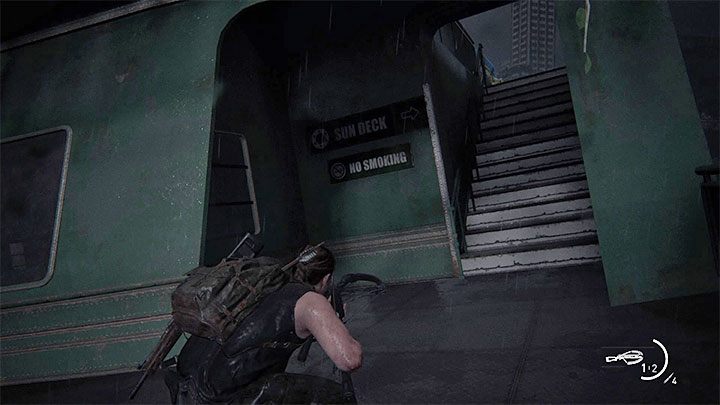 To reach this safe, you must locate the stairs shown in the image above - they lead to the top deck of the wreck. 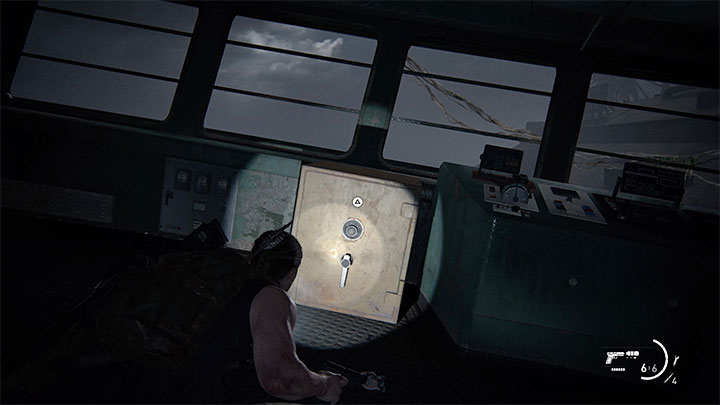 The safe is located near the stairs, specifically in the captain's bridge. There may be at least one infected person in the area. Enter 90-77-01 to open the safe. 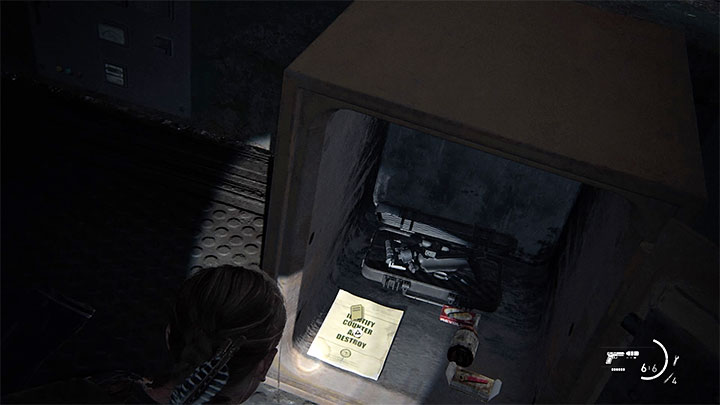 The training manual isn't among the collectibles mentioned at the level selection screen. However, it is an important item, as collecting it unlocks a new category of Ordnance passive skills that can be bought for supplements. The new skills allow you to craft items of higher quality and in larger quantities.

The manual is stored inside the safe described above, which is located on the captain's bridge. This is the last training manual in the game - if you have found all the previous books, you will be awarded the Journeyman trophy. 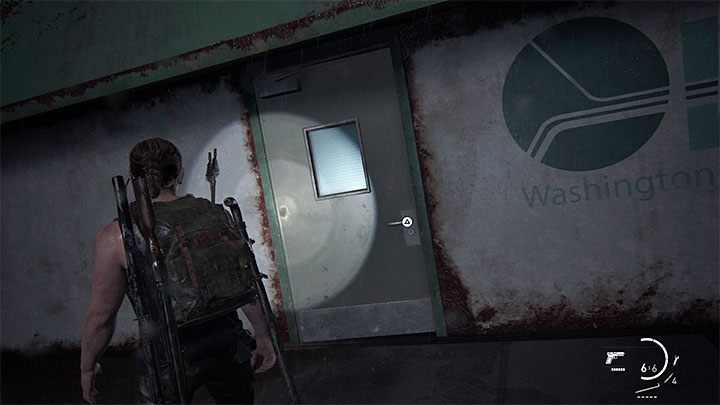 It's an artifact. It is found near the end of your exploration of the ferry. You must specifically deal with the monsters on the top deck of the wreck and there reach the door shown in the picture - Abby must break them. 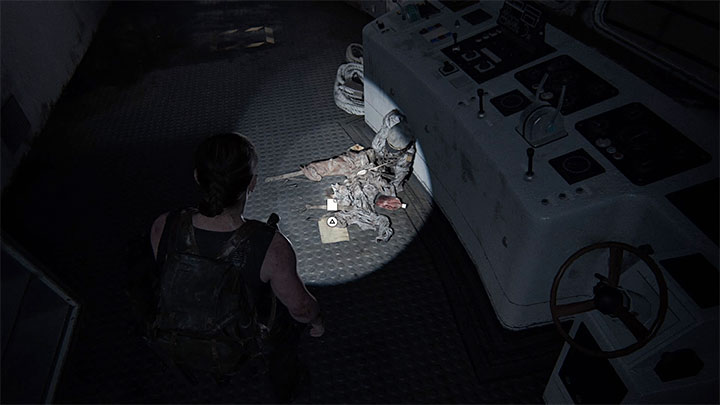 You will reach the command center. The document lies on the ground next to a corpse. 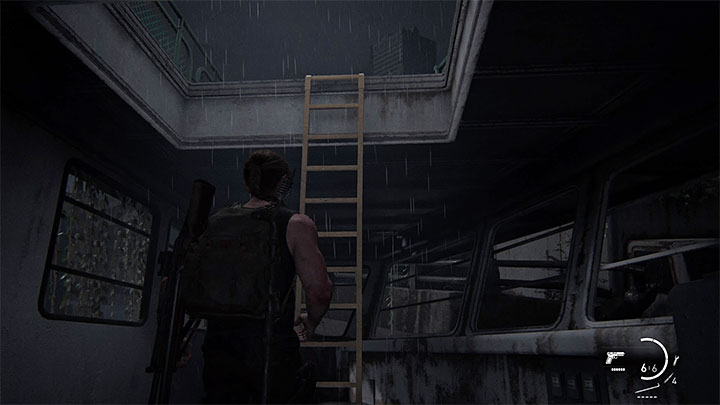 You can find this secret immediately after getting the document described above. Use the ladder shown in the picture. 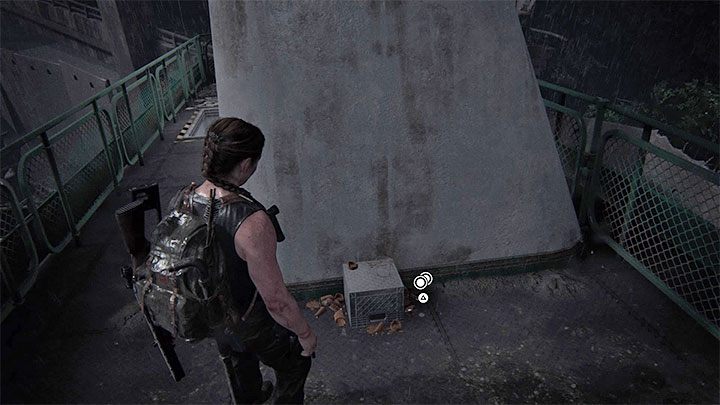 After using the ladder, turn 180 degrees and examine the area in front of you - the coin is on the ground. 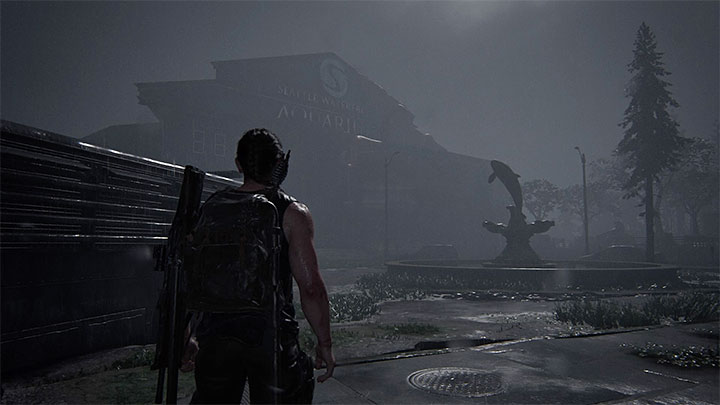 This secret is easy to miss. At the end of the stage you will reach the large aquarium building. The fountain shown in the image is in front of this building - head towards it. 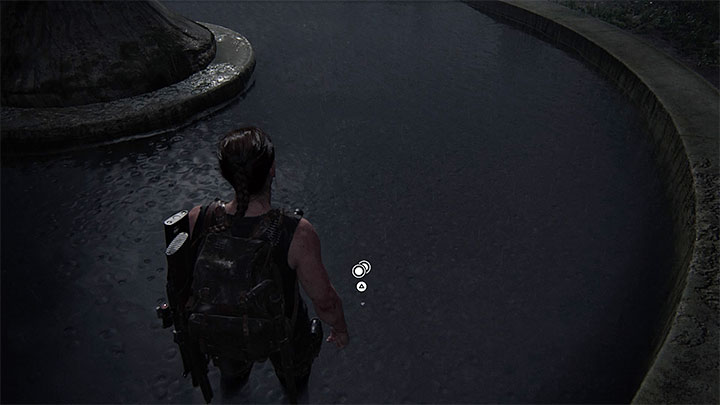 Jump into the fountain. The coin lies at the bottom of it.