This page of the guide to The Last of Us 2 has the most important tips for combat and stealth. You will learn how to effectively eliminate living opponents and monsters, how to avoid death and damage, as well as how to sneak through hostile locations and perform successful stealth attacks. 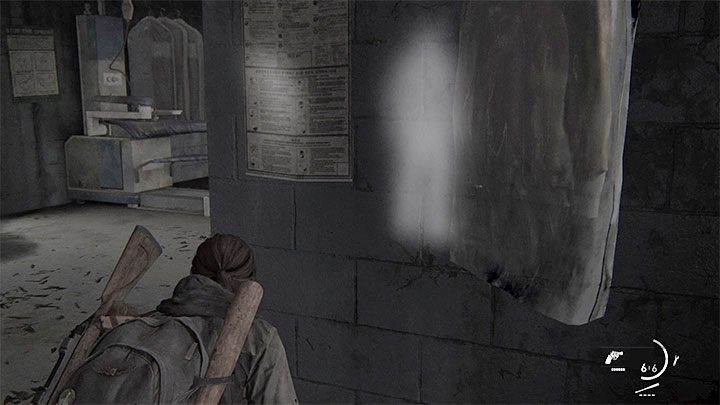 Stealth was an important part of TLoU1 - this is also true for the sequel. It has two main uses - you can try to avoid confrontation altogether by sneaking past areas with enemies, or to plan stealth attacks, which will allow you to eliminate more opponents without setting off an alarm. The further confrontations should be played in such a way so that you avoid triggering an alarm. This is especially important when playing at higher difficulty levels.

Most of the time, the confrontations begin when hidden, and we recommend that you stay that way. Direct combat often results in losing health points - in The Last of Us 2, health does not regenerate (i.e. healing items are needed). Moreover, using weapons and gadgets during combat quickly depletes supplies that aren't easily found during gameplay.

We advise you to begin every confrontation with activating Listen Mode, which is turned on after holding R1. This mode "scans " the surrounding area and makes it easier to find and track opponents. Moreover, it makes it easier to avoid enemies and helps to plan surprise attacks. 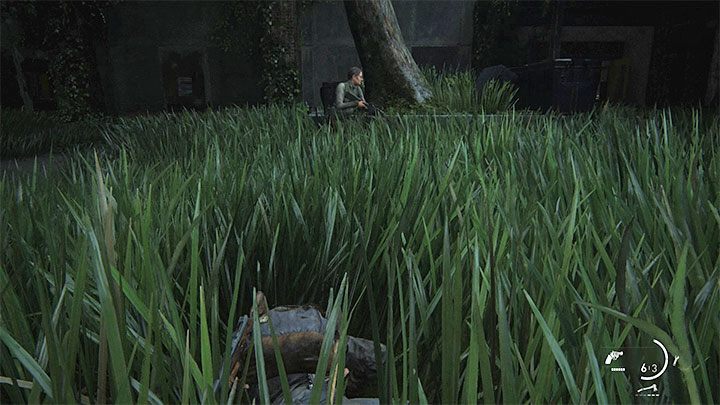 Before you start sneaking, crouch or lie down on the ground (hold Circle) Crawling will make it very difficult for opponents to locate you, but this stance limits the heroine's mobility - you won't be able to defend yourself from a melee attack or perform a silent execution.

When sneaking around, pay attention to your surroundings so you don't suddenly get noticed by an opponent or a sniper you haven't seen before. Aside from various covers found along the way, you can also hide in tall grass. However, you have to be aware that hiding in tall grass is not 100% effective. You can still get noticed, especially if you're crouching. So, use tall grass whenever you can, but remember that it does not make you completely "invisible"

While sneaking, make use of throwables which can be used to distract the opponents. They are particularly useful for infected, who quickly read and approach the source of the sound. You can use their behavior to set traps, e.g. plant a mine and then throw a brick aimed at the vicinity of the trap, or throw a Molotov cocktail or a pipe bomb at a group of opponents who came to investigate the suspicious sound. 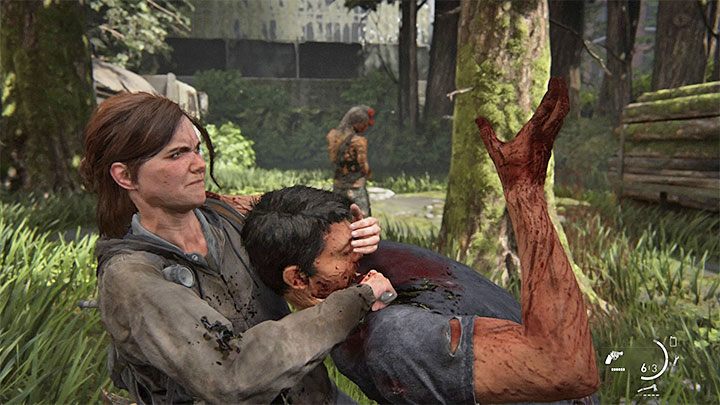 There are two main ways of disposing of opponents quietly. The first variant involves sneaking to an opponent and performing a silent execution. To successfully perform a silent execution, you need to approach the enemy from a side or his back. 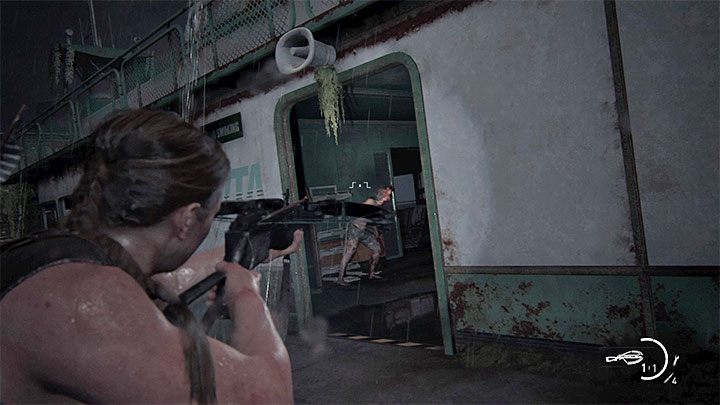 The second option is to use weapons that do not generate excessive noise. Such attacks will not alert opponents. The exception is when the moment of death is recorded by another opponent, and when a silent attack will only lead to injury to the attacked enemy. 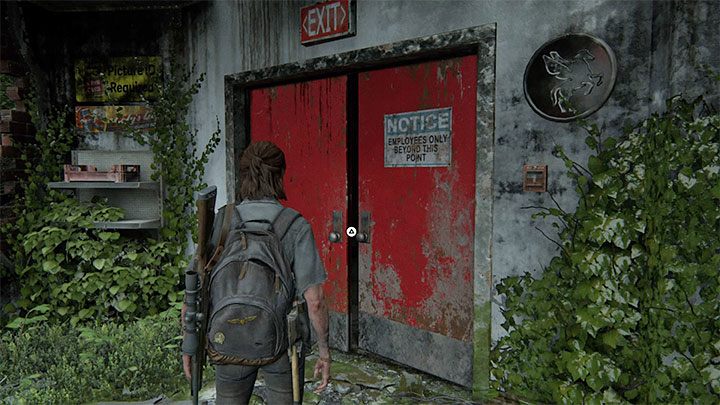 Remember that not all confrontations in The Last of Us Part II are mandatory. In some locations, you can simply focus on sneaking past enemies without attacking them and then look for a way out. However, this can be difficult when finding yourself in a given location for the first time.

The way out of the current area may take a form of a door with an exit sign above it, a window, or a barricaded passage that has to be unlocked by holding Triangle. If leaving a given location generates noise (e.g. breaking down the door), focus on clearing the QTE sequence in the first try, so you won't get caught by remaining living opponents. 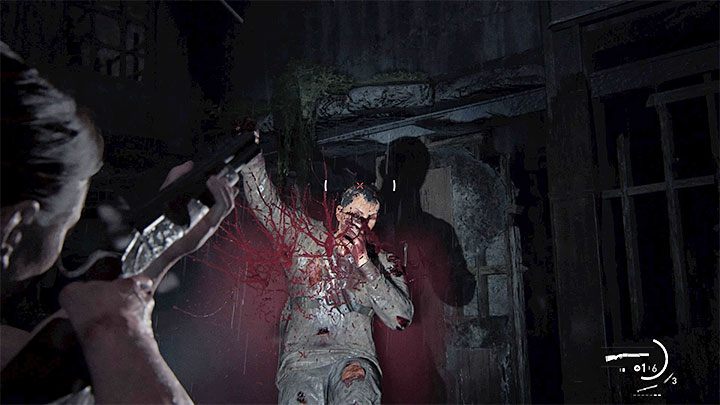 In The Last of US: Part II firefights may take place if: 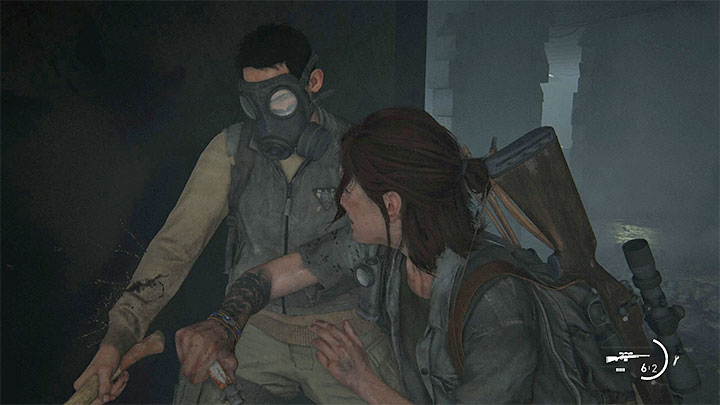 Fighting opponents can be divided similarly to silent executions. The first category is melee combat - TLoU 2 offers a completely revamped combat system. Your character can perform dodges by pressing the L1 button. Of course, you have to make sure that a successful dodge requires perfect timing - this is the only way to avoid getting hit.

After a successful dodge you can start throwing your hits. Having a "big" melee weapon (machete, hammer, baseball bat, or board) will seriously increase your damage. Each melee weapon has a limited number of uses - from 3 to 6-7. Once the number is exhausted, the weapon is destroyed. Interestingly enough, after unlocking the passive skill Craft Melee Weapon Upgrades, you can repair (one time only) and reinforce any found melee weapon. This will help you maintain the best available weapons in shape for longer amounts of time.

If you don't have a big melee weapon, you have to rely on weaker attacks: 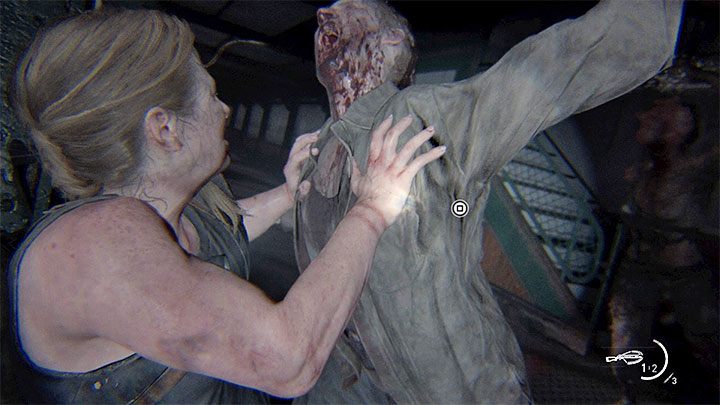 During melee combat, your hero can get grabbed - avoid it as much as possible. This is because as you struggle with your opponent you will gradually lose health points.

Wrestling is particularly dangerous in case of stronger monsters, such as clickers and bloaters. There's a risk that your character could die during the grapple and you won't be able to defend yourself by pressing Square rhythmically. It should be mentioned that Abby can get rid of some of the enemies she wrestles with more quickly thanks to crafted shivs. Shivs are also her last hope if she is caught by a clicker. 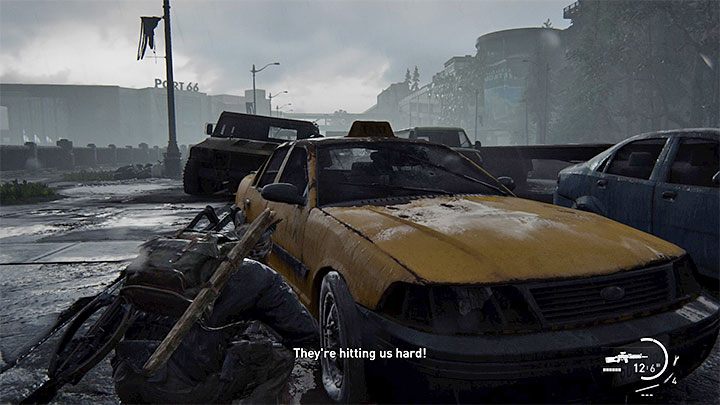 The second means of fighting are long-distance battles which most of the time involve firearms. The situation is made easier if you are dealing with opponents who do not have any distance attacks. You can shoot them while they attempt to get close to your hero.

When fighting with armed opponents, remember about using covers. You can get hit very easily when staying in the open. What's more, your hero can be knocked down. In such cases, avoiding further attacks is made difficult.

When fighting humans, check your flanks, as the enemies will attempt to attack you from a side or from the back. It is worth noting that during open fights you can also use the Listen mode and keep track of your opponents ' actions. 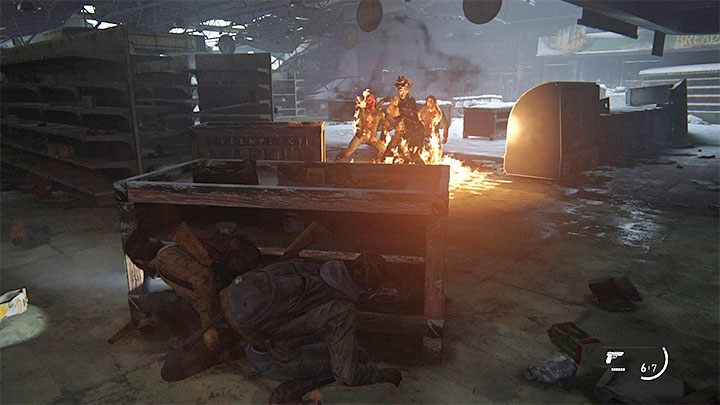 Some fights can be made easier thanks to gadgets: