This part of our guide was devoted to weapons, as well as other items of equipment that can be found in The Elder Scrolls: Blades. The following chapter describes all three categories of melee weapons - light, medium (balanced) and heavy - along with the division into one-and two-handed alternatives. Here you will find information about info about shields and jewelry, as well as you will learn what potions and poisons exist in the game and how to use them effectively. 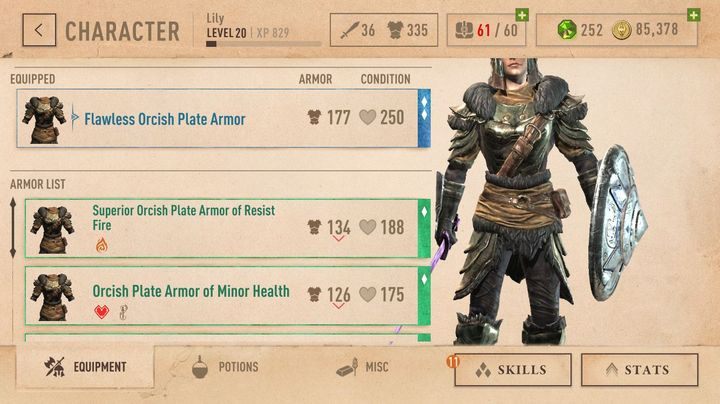 Melee weapons there are the basic combat craft in TES: Blades. The developers have not prepared ranged weapons, so you only use melee combat weapons. Skills largely depend on used weapons, and magic plays rather auxiliary role.

Each weapon deals a different type of physical damage. This is important in view of the sensitivity and resistance of opponents, as well as in terms of daily challenges (for example, "Inflict X damage with maces"):

Light weapons include Daggers, Hand Axes and Light Hammers. This weapons are one-handed, so the hero can use the shield at the same time. Although it has the lowest attack value compared to the rest of weapons, it is the light weapon that delivers the fastest strikes. It makes it the best option for combos. It is the bonus to damage from several consecutive attacks that rewards relatively low critical damage.

These arms consist of - Longsword, War Axe and Mace. Balanced weaponry is useful primarily for its versatility - this type of weapon can be used either as one-handed with a shield or two-handed (after removing the shield) to increase the damage dealt. The price for this is the average effectiveness of both the combination of consecutive strokes and the amount of critical damage.

The category of heavy weapons consists of Greatsword, Battleaxe and Warhammer. Only a two-handed weapon deals the highest damage, which takes a long time to attack. In the case of this weapon we also do not have the possibility to use shields, but our hero is able to partially stop the attack with a timed block.

Shields are a very important part of any battle if we use light or well-balanced weapons. Although they do not allow the use of two-handed weapons with the highest damage, which provide the ability to block most of the attack, they may temporarily stun an opponent with a time-sensitive block. Also, they let you use shield-striking skills.

Jewelry is divided into necklaces and rings. The first category gives you bonus ranks to your existing perks, the latter gives bonuses to spells and skills. Depending on rarity, this bonus can be applied to a perk/spell/skill of a higher or lower level. Jewelry can be found in chests, received as a reward or found in the Abyss mode. You can also craft them at the smithy or buy from a conjurer.