The guide for The Cycle game contains a complete set of information necessary to understand this rather simple but extremely demanding game. In the text you will find practical tips and explanations of all the gameplay mechanics, such as the completion of contracts, fighting with beasts and other players, the signing and rupture of pacts or efficient navigation through the map. There are also sections related to the player-controlled character - here you will find information about the available equipment, the creation and improvement of equipment, as well as the development of the character, which is associated with the mechanic of the factions.

The Cycle is an online FPP shooter, which takes place on the fictional planet of Fortuna. Twenty players compete against each other in solo mode, in pairs or in groups consisting of four characters, fulfilling various contracts, fighting wild and hostile fauna, and clashing with other players. During clashes, players earn credits, with which they can purchase new pieces of equipment, such as weapons, gadgets or special skills, and gradually develop them. The production puts emphasis on quick clashes lasting only 20 minutes, during which players can compete with each other, or create emergency alliances to jointly realize their goals. The engine used in the production of the game allowed the developers to create an effective looking planet, as well as enabled players with older computers to experience a flawless and fluid gameplay.

The Cycle is not the easiest game, especially due to the fact that you will regularly clash with other players, who are much harder to outsmart than the enemies controlled by AI. For this reason, we present you a list of starting tips that will help you familiarize yourself with the title:

How to start the game? 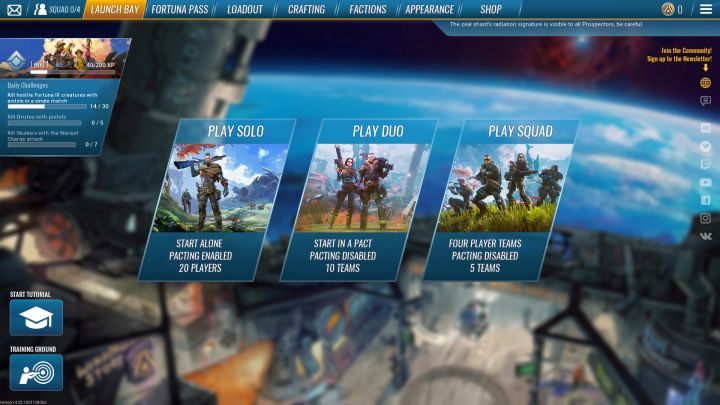 To start the game, go to the Launch Bay tab in the main menu.

After starting The Cycle, a short, ten-minute training phase will initiate automatically, during which you will learn the basics of gameplay. Once it ends, you will be brought to the main menu of the game. To start the game with other players, go to the Launch Bay tab, select one of the available modes (Solo, paired with another player or in a group of 4 people) and start searching for those who want to have fun together. After a few minutes at most, the game should start.

Why can't I choose this game mode? 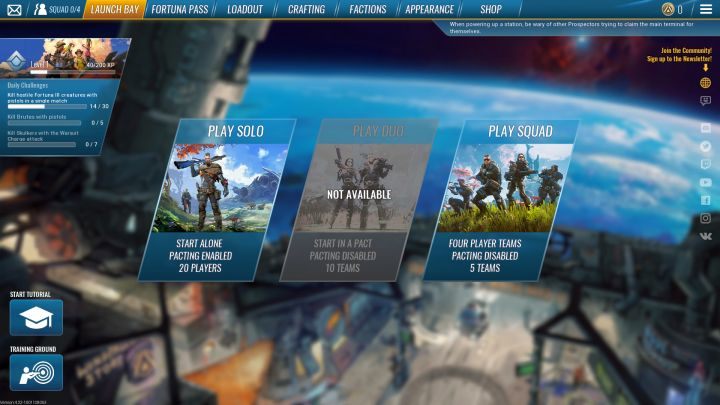 Locked (grayed out) game mode is not a cause for concern.

Sometimes it happens that in the game one or more game modes are not available - the game mode is then grayed out and the player will not be able to select it. This happens for a simple reason - the developers of the game, are, most likely, doing some maintenance work or are applying patches to the game, causing a game mode (or the entire game) to be unavailable. All this, however, is temporary - most often after several minutes the mode will become available again and you will be able to select it.

How to unlock new weapons? 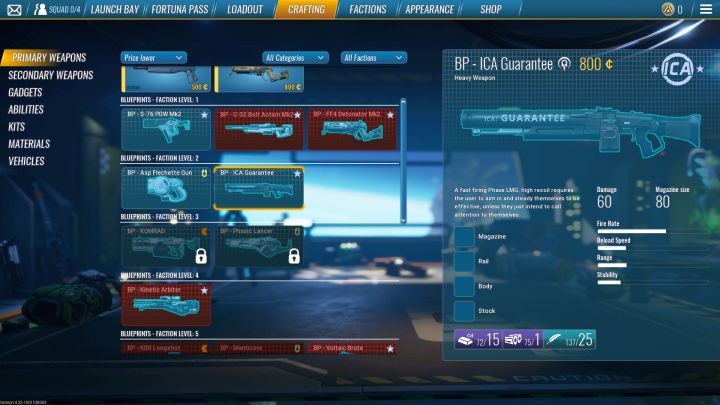 New weapons are unlocked in the Crafting tab.

Each player starts the game with the basic equipment - a handgun, an SMG and a sniper rifle. The game features dozens of weapons, but first you need to unlock them. The first step is to increase the level of relations with a given faction. Once this is done, you must go to the Crafting tab, find the weapon you are interested in and create it. Now you need to go to the Loadout tab and place the produced weapon or item into one of the free slots on the right side of the screen. From now on, you will be able to use this item during the game.

How to use new weapons? 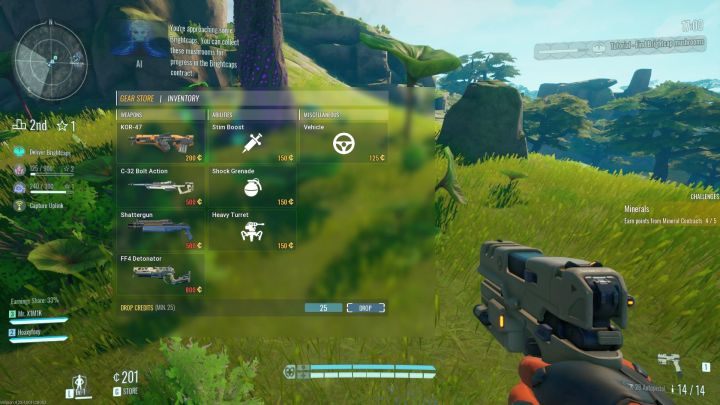 You can purchase a gun in the store opened with the "G" button.

When you land on the planet of Fortuna, you will only have a simple handgun in your inventory. To be able to use a new weapon, you will need to buy it. This can be done using the store - it is activated by pressing the "G" button. After purchasing an item, it will be dropped a few meters in front of your character - you just need to walk up to it and interact with it, allowing you to use it.

To purchase weapons, however, credits are required. These are earned by performing various actions during the game, such as killing monsters and other players, fulfilling contracts or finding credits scattered on the map. Detailed information on this issue can be found in the "Earning credits" chapter.

How to respawn after death? 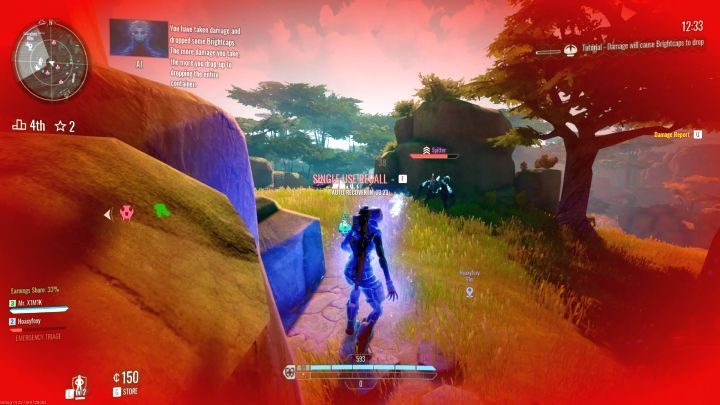 During the match, you can resurrect once, giving your character a second chance.

During the game, each player has a one-time resurrection option at their disposal. When the character is knocked down, you will have two choices - either to wait a few seconds until the characters gets back up by himself (or your ally picks you up), or to use the automatic resurrection option by pressing the "F" button. If you decide for the latter, the character will be teleported to the drop zone from the beginning of the game.

Note that the auto-resurrection option is only available once during the game. When the character is knocked down again, you will have to wait for regeneration - if the enemy attacks you during this time, the game will end.

How to earn credits quickly? 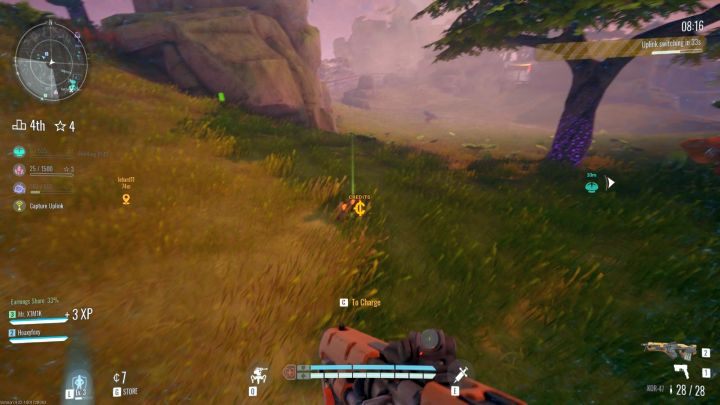 Credits in The Cycle are used to buy new weapons, gadgets and special abilities while on the map. Credits are awarded for killing wild fauna, fulfilling contracts (for reaching a new level), you can also get them from boxes scattered on the map, as well as by killing other players and collecting their loot. It's worth combining these actions and not focusing on just one. You should also avoid fighting with other players if possible to not expose yourself to unnecessary danger and risk the death of your character.

Detailed information on this issue can be found in the "Earning credits" chapter of this guide.

Even though The Cycle has quite a detailed graphic design, it does not require a high-end PC to run smoothly. For a comfortable experience (about 60 frames per second) in lower resolution (720p) and settings at "Medium" levels you will need a quad core processor (Intel i5) clocked at 2.6 GHz, NVIDIA GeForce GTX 760 and just 4GB of RAM. The title gives access to quite a lot of different video options, allowing players to lower the parameters even more without impacting the quality too heavily.

About The Cycle Guide