On this page of our Callisto Protocol guide, you can find the walkthrough for Outbreak - the first chapter of the game. Our guide shows, among others, how to break out of Jacob's cell, how to get through the prison block, how to defeat opponents in hand-to-hand combat, how to avoid being detected by the security units, where to find the weapons lockup where to get a melee weapon for Jacob, how to return to the watchtower and how to avoid Captain Ferris. 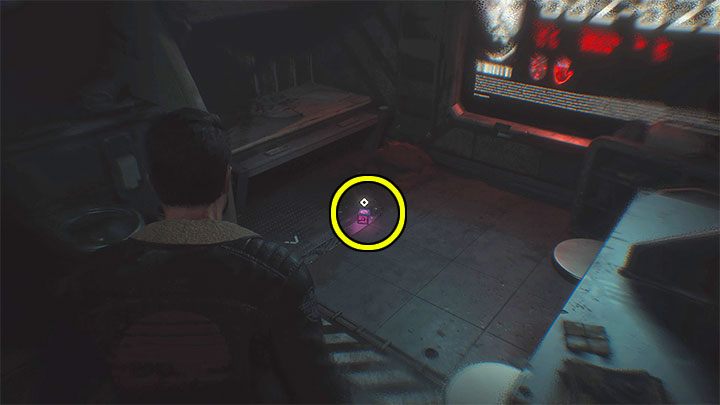 Once the action is taken to the cell, you're receive control over Jacob. Examine the purple cube on the ground and a new cutscene will start. 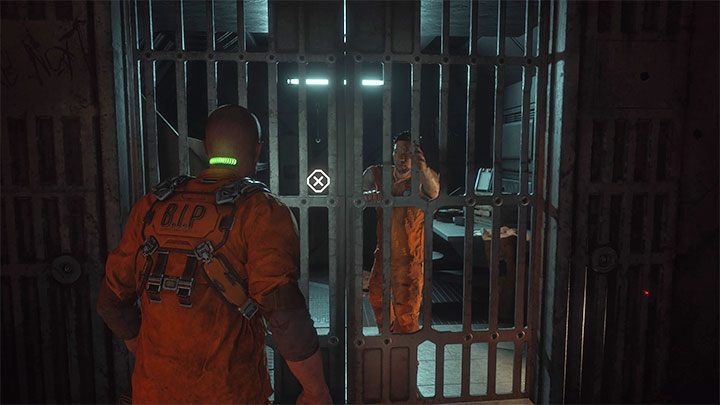 You wake up after the epidemic breaks out, and you'll discover that you can leave your cell. Follow the only available path through the prison block. Descend to the lower level and take the Shiv from Elias - a fellow prisoner.

Cross the bridge to the control room 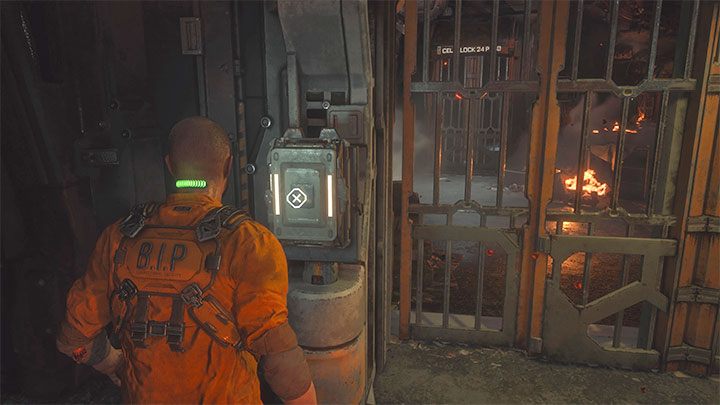 The Shiv can be used for stealth attacks and opening pathways - use it on the nearby crate (screenshot) to unlock the gate.

Get past the destroyed bridge and use the shiv again on the crate. Interact with the door and quickly press the indicated button (Triangle/Y on consoles) 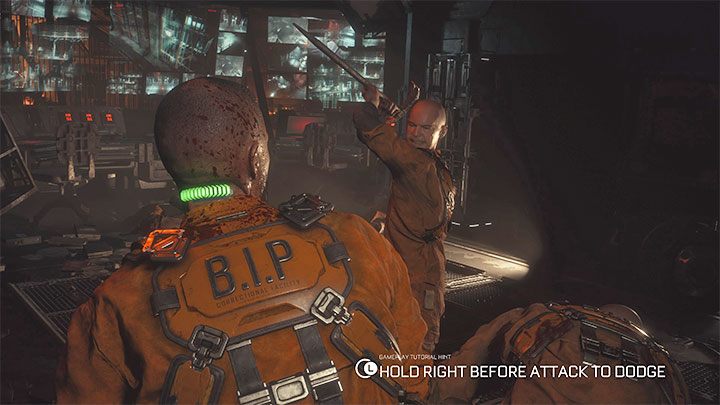 Time for a melee combat tutorial: 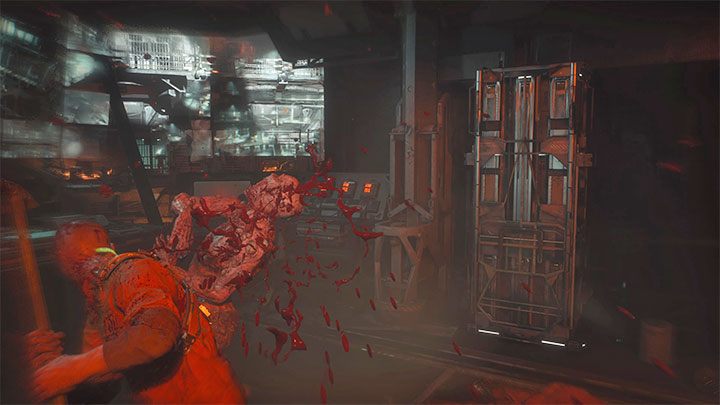 You need to face the first monster in the game: Dodge (1 or 2 in a row) and launch attacks of your own with the crowbar in between them.

Moreover, you can practice blocking - it is activated by moving the analog stick down (note - Jacob can receive a little damage even when an attack is blocked). 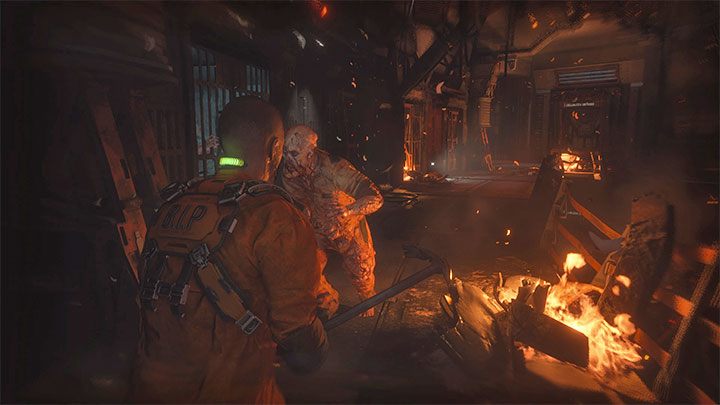 You'll learn about an elevator. Select the Cellblock 24 P240 from the menu. Along the way, another monster is waiting for you and while you're at it, you can practice stomping a downed enemy (Triangle/Y) - this will make random loot appear. Reach the platform and use the panel to activate it. 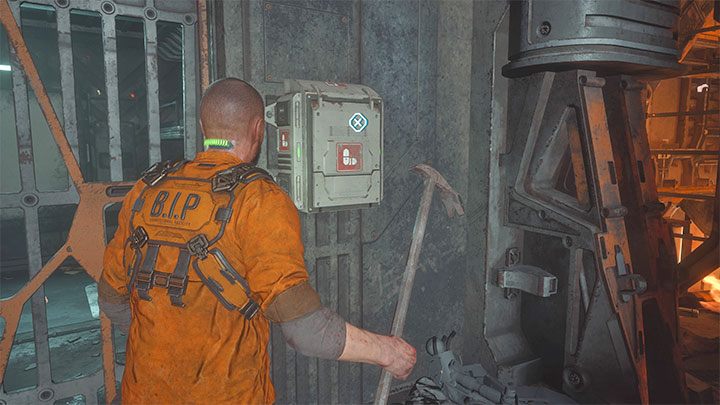 You're now on a new floor of the prison block. More monsters are here and if you get grabbed, win a wrestling sequence (Triangle/Y) to make the beast back down.

Along the way, you'll encounter a chest with the first Health Injector (screenshot above) - try to have 1 healing item in your inventory at all times Reach the Lift P105 and use it. 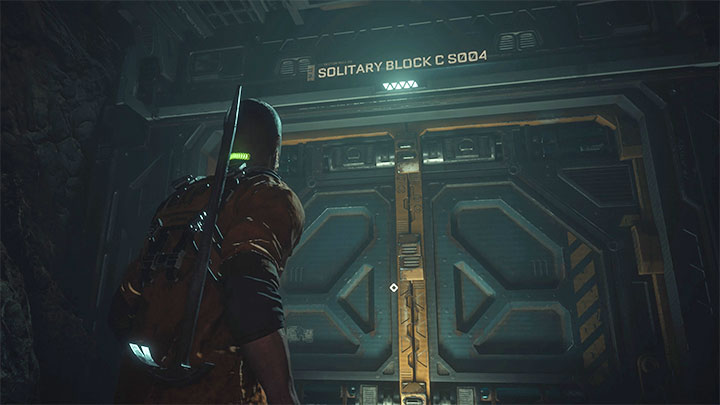 Follow the path laid out by corridors and slide the door open. Along the way, you can collect loot (the most valuable items are found in large containers) and explore the side cells.

Reach the Solitary Block C S004 and Access Hall S026 gates and slide them open. Use the new elevator and continue forward - you'll learn that the security robots are killing the prisoners.

Sneak past the Security Units 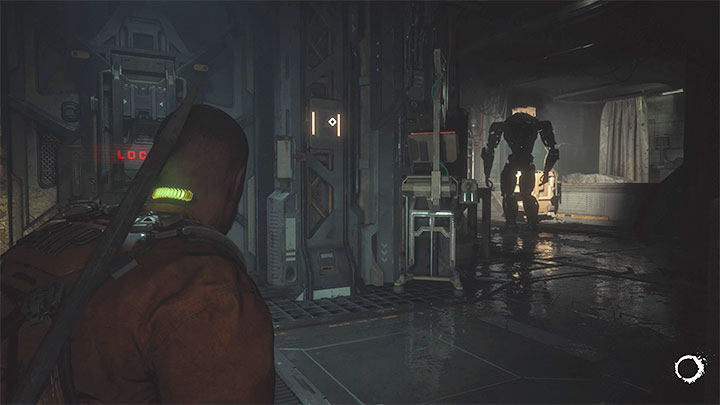 You'll reach a ventilation shaft. Don't leave the shaft until the robot turns the other way .

Maintain crouched position when moving. The robot will travel through the main corridor. Take the route leading through side rooms and wait again so that the robot stops observing the area. Ultimately, you need to use the Shiv on the chest on the left (screenshot). This will gain you entry to Intensive Care M109. 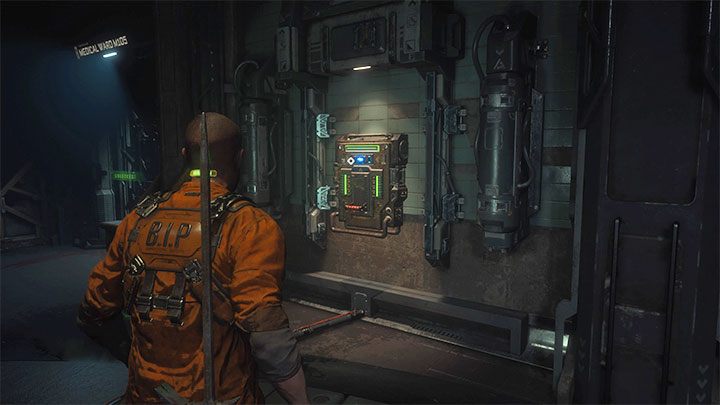 You'll reach the main corridor. Don't go to the end of the right corridor, as there is a robot there.

Optionally, you can visit other rooms and collect secrets and smaller loot. To continue with the story, travel to Surgery M112 - the room opposite the place where you started the exploration of this floor. In the place from the screenshot, you can remove a Gate Fuse from the box. This will cut off the power to the current room, but you need it elsewhere. 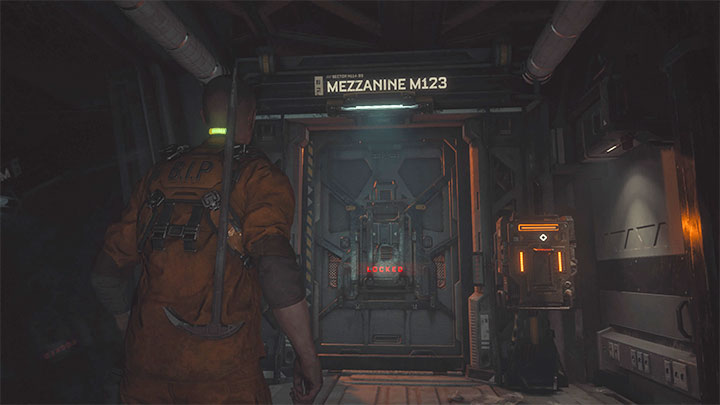 Stay in Surgery and take the path leading to Mezzanine M123 . Next to it, there is a fusebox in which you can place the item you've just obtained. This will unlock the door.

If you want to explore the area in 100%, you can carry the Gate Fuse to the main corridors and use it to open Intensive Care M120. After exploring the optional room, remove the Gate Fuse again to carry it to Mezzanine M123. 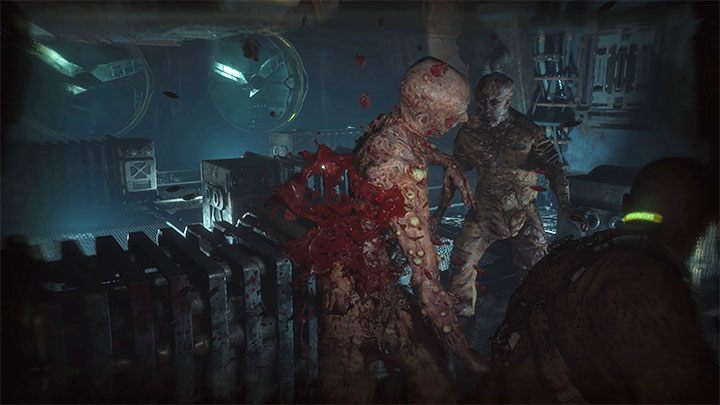 In the new area, watch out for a burning monster. Reach Access Hall M124 and then continue to Security Control M125 . Climb to the hole in the wall and crawl to the neighboring room.

You'll be attacked by 2 monsters right after leaving the vent. Try to land attacks that hurt two beasts at the same time and don't get cornered. After defeating the first monster, the other one should escape.

Go through the next vent. A new weapon will be found - the Stun Baton - it replaces the crowbar and becomes the main melee weapon of your hero.

Return to the Watchtower

Use the console to lift the blockade and unlock the exit. Be ready to face a monster. 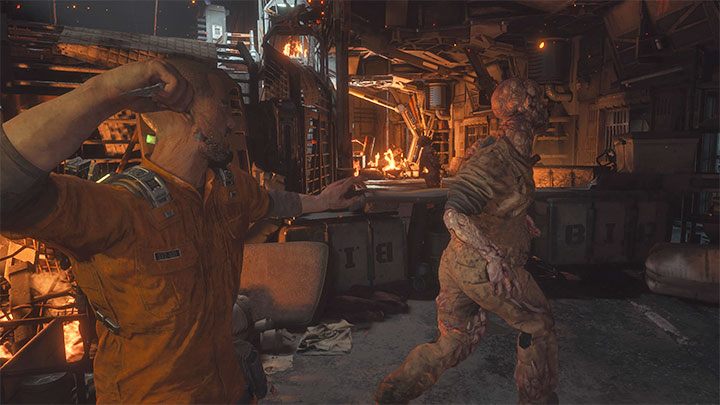 Choose Access Hall P261. You're back to the prison block . Follow it right - consider sneaking in order to not alarm the monsters prematurely. If you maintained stealth, you can now perform a takedown - approach the monster from behind and press the stealth attack button (X/A on consoles). 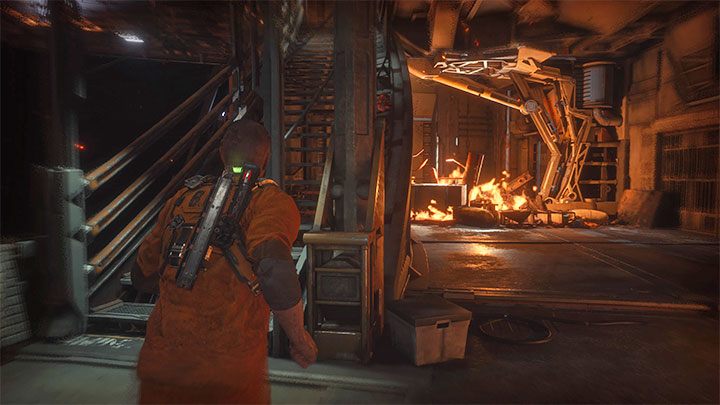 Don't try to face all monsters in the area at once, as you'll surely be defeated. Jump over the obstacle and run to the left stairs that lead to the upper level. 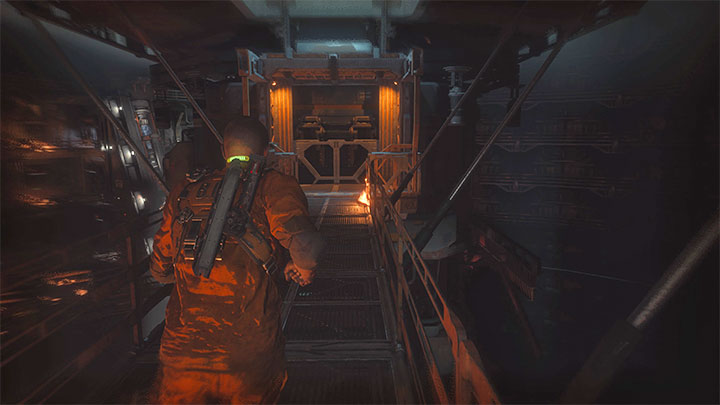 Once you're up, choose the left catwalk leading to the watchtower. Reach the elevator shown in the screenshot and use the panel to make it move. This will end the chase sequence. 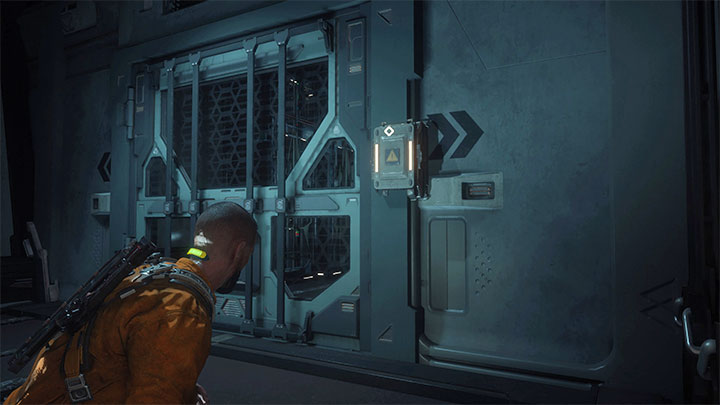 Enter Panopticon Control P400. There is no risk that the captain discovers you prematurely. Try to use the shiv to open the door - a scripted event - a cutscene - will start. 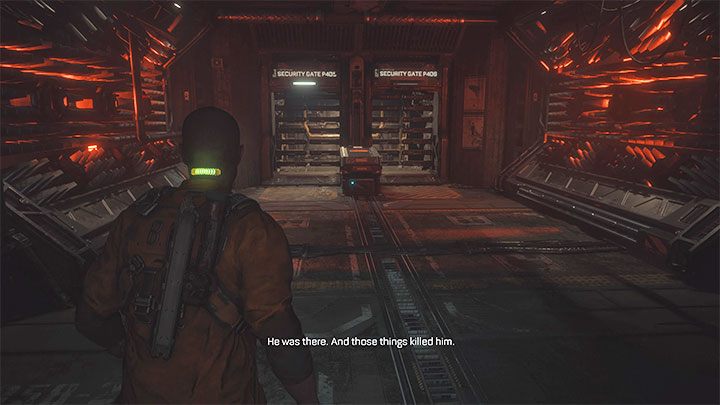 You can explore the room now that the captain is out of the equation (new collectible) or head immediately to Security Checkpoint P402. Access Security Gate P405 - it will open. You've made it to Aftermath chapter.