This guide to The Bard's Tale IV: Barrows Deep is a complete solution with many guidelines that will help you pass through the next bard's story. The entire guide is divided into two parts. The first one is a guide to The Bard's Tale IV: Barrows Deep. Here you will find tips about the most important elements of the game, such as character creation and development, skills available for each character class (archetype), exploration and item crafting. In this section of our guide you will also find a FAQ section. In it you will find answers to questions that may arise during the game. Also, we've attached an annex where you will find information about system and control requirements.

In the second part of the guide you will find a walkthrough for all of the main and side quests, divided into locations in which they take place. Thanks to those pages you will easily find all of the hidden chests and defeat all of the enemies you stumble upon. You will quickly acquire basic knowledge about the game, but also get through more difficult moments of the story.

The Bard's Tale IV is the fourth installment of the dungeon-crawler series. InXile Entertainment studio is responsible for the game's production. In this part we will once again visit the world known from the previous parts of this fantasy universe. This time the adventure will focus on the city of Skara Brae. It's from there that you'll set off to explore further dungeons. Of course you won't be alone. You will be accompanied by a team of fantasy heroes that you may recruit during the game.

Starting a new adventure is not always easy. Occasionally, problems can occur even from the very beginning. Here are some tips to help you before you begin your adventure in Bard's Tale IV.

Here you will find information about the basic game mechanics. You will find out, among other things, how specific in-game systems work like combat or dialogue. The most important pages in this section include:

This chapter is devoted to one of the most important aspects of the game, which is your character. The character you have created is the only member of the team that you cannot exchange. That's why it's worth rethinking your decision. This includes the following pages:

It is often the case that during a game there are specific questions about a particular issue. In this chapter you will find answers to questions that may arise during the game.

In this walkthrough we have described all quests of the main plot as well as side quests and additional tasks. You will also find information about various secrets hidden in the game world.

About The Bard's Tale 4 Game Guide 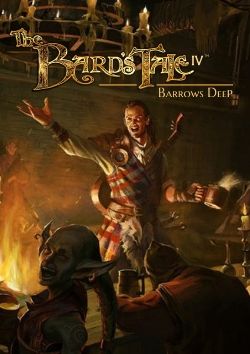 The Bard's Tale IV Barrows Deep for PC is the fourth major installment of the famous dungeon crawlers series that began with the release of The Bards Tale in 1985. The title was developed by inXile entertainment, the creators of Torment: Tides of Numenera, Hunted: The Demons Forge, and Wasteland 2. The Bards Tale IV goes back to the roots of the series which date back to the mid-80s. The project, which came to existence thanks to the fundraiser at Kickstarter, was overseen by Brian Fargo. The developer started his career at Interplay and worked on such titles as The Bards Tale, Neuromancer, Dragon Wars, Fallout, Fallout 2, Stonekeep, Baldurs Gate, Icewind Dale, and Planescape: Torment.

In The Bards Tale IV, the players are taken to the original fantasy world, which is clearly inspired by Scottish and Celtic culture and mythology, known from the previous installments of the series. We start the adventure in the vast city of Skara Brae and thence set out to numerous and dangerous ruins and dungeons. The players create their own party of adventurers, choosing from many available racessuch as elves, humans, or half-orcsand classes. The composition of our company is not meaningless and influences NPCs attitude as well as the quest and dialogue line availability. The list of plot surprises goes on, though. Many decisions we will make in the course of the game may significantly change the image of the world and Skara Brae.

The Bards Tale IV for PC is powered by Unreal Engine 4 which gave the developers significantly bigger technical possibilities than when they worked on their previous games. Whats interesting, the photogrammetry technique, which allows to scan real object and turn them into photorealistic 3D models, was used to design levels and scenography elements.

"Bethesda Did A Great Job With Fallout"  Interview With Brian Fargo, Creator Of Cult RPGs

During the latest edition of Digital Dragons gaming conference that took place in Kraków, Poland, we had an opportunity to chat with Brian Fargo. The legendary developer talked about his current and future endeavors.