This page contains the description of The Banner Saga 3's twentieth chapter - We Live as We Will Live. You have to go back to Arberrang. The caravan led by Rook or Alette must go on a new patrol. In the later part of this chapter you will have to, e.g. make an important decision and try a new gameplay mechanic (you have to control a sieged town as long as possible).

Arberrang - Journey to the gate 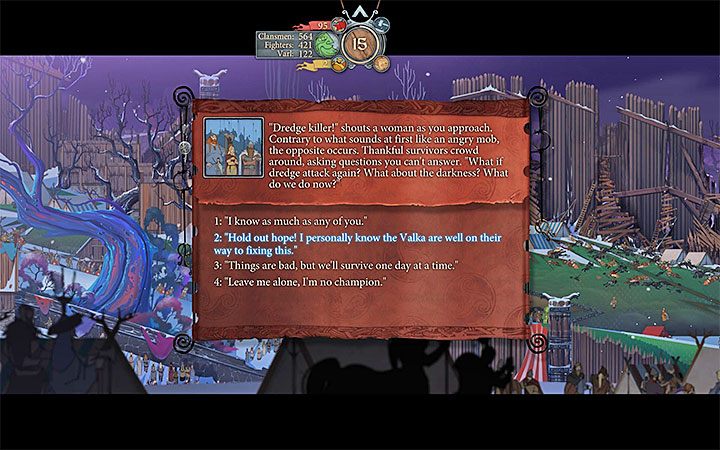 This chapter can go differently - this depends on whether you have murdered Rugga (in chapter 18) or you let him live and you agreed to serve under his banner. Aleo will inform you that Rugga was set free (provided that he didn't die).

You can rest, visit the marketplace and level up your heroes or you can click on the gate and start a new patrol. One of the first few events may be about the Horseborn - Ubin will provide you the details. You can ignore the problem, order one of your Horseborn to deal with this situation or you can meet with other Horseborn yourself and offer them protection - the last choice is the most profitable because you will get 23 fighters.

Another event may be about meeting a Foreman who asks your party to help him repair walls. You can ignore him (this decreases your morale), send a small group to help him (-5 fighters) or order a large group to help the man (-20 fighters). Use the last option if you want to repair the walls in the quickest way. However, this also means that you will lose the biggest number of fighters.

During your patrol the caravan can be stopped by beggars. You can give them 5 supply units, ignore them (this changes nothing - the members of your caravan will understand this decision) or you can make an empty promise (morale decreased). 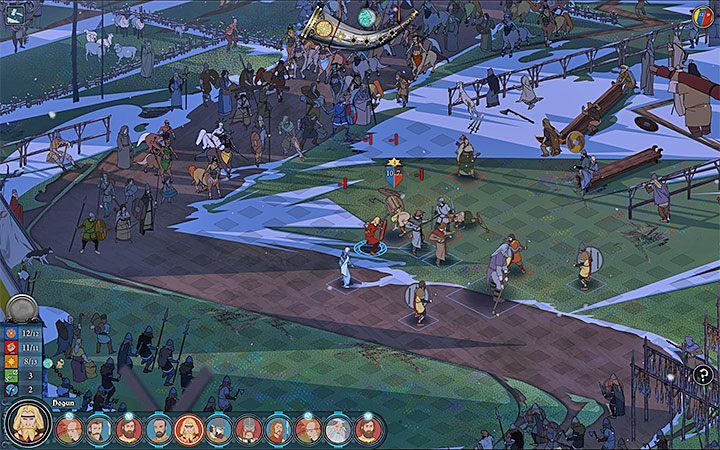 On the way to the gate your party can also be stopped by a woman who accuses you of murdering Dredges. The choice of your reaction determines the number of new people who will join the caravan. The second option is the best one (see the picture above) - it will give you 112 clansmen. Don't choose the dialog option located on the bottom - no one joins you; your caravan loses morale.

Approaching the gate triggers an additional cut-scene. It focuses on Rugga (provided that he is still alive). If he is dead then the game will replace him with Josurr. These encounters are similar. The biggest difference are the reactions of the townsfolk to the decision made back in chapter 18 when Rugga was a prisoner. A few members of your caravan may not like your choice of representing his banner - this decreases morale and can cost you up to 100 clansmen. The meeting ends with a battle with Rugga's/Josurr's warriors (you can't avoid this confrontation). However, this battle won't be a challenge. 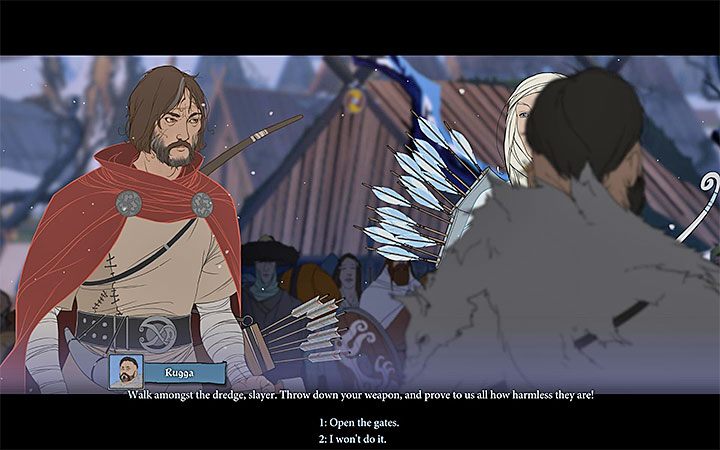 The next event is fixed and it will happen regardless of which events you got during your journey to the gate. Zefr appears and he declares himself to be the new leader.

When the man walks away you may be forced to make an important decision (see the picture above):

Arberrang - The town in ruins 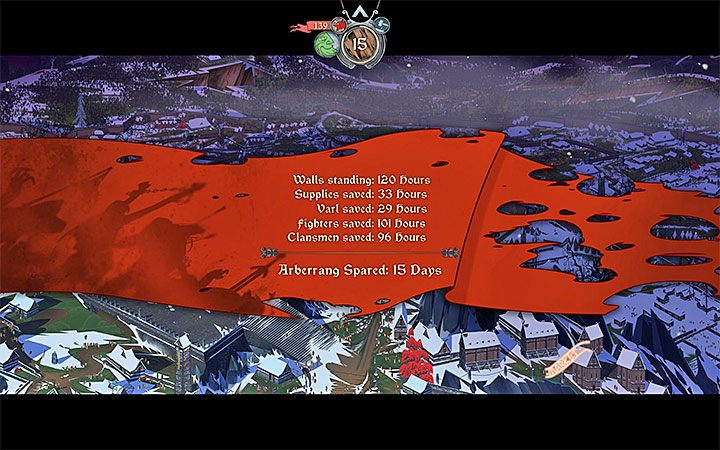 This next part of the chapter happens always, regardless of your decision near the gate (it doesn't matter if Rook/Alette is dead or not). The game introduces a new mechanic - you have to survive for as long as possible while defending Arberrang. Your previous decisions and the size of your caravan will determine for how many days you can defend the town. Her is the list of aspects that will be taken into consideration:

In our case after adding everything up we got 15 days of siege. You don't have to worry about this now, the "countdown" starts in chapter 21 when you play as Iver. It should also be mentioned that this isn't the required amount of time in which Iver and his comrades have to reach Arberrang. You don't have to replay this chapter or even the entire game if you got fewer days. 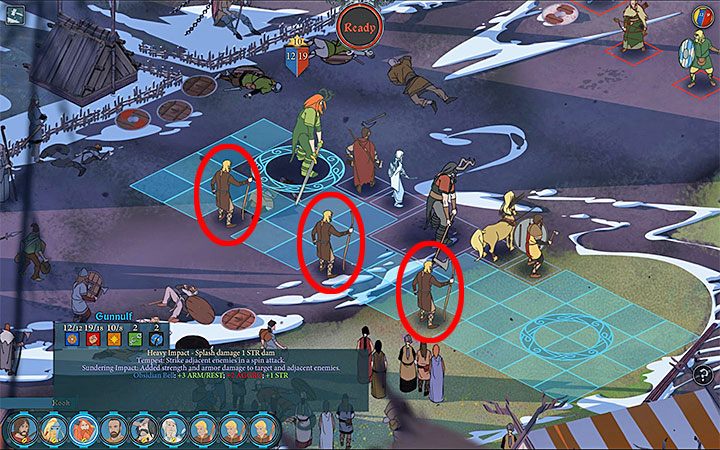 After this part you will have to participate in another conversation with Zefr.

It is possible that you will have to participate in an optional battle with angered people. Your goal is to defeat a group of rather weak enemies. However, this battle has an additional hindrance - Menders can't be knocked down. These characters were marked in the picture above. Menders can participate in a battle just like other party members. Each one of them can use Mend ability that regenerates (usually partially) an ally's Armor. Try to select more Varl for this battle to protect the Menders. Your priority is to eliminate those enemies who get dangerously close to the Menders. Keep these characters in the back and avoid attacking anyone.

After the battle the game will play a cut-scene. This marks the end of the chapter.