This page contains the description of The Banner Saga 3's nineteenth chapter - The Hounds are a-Hungered. The chapter lets you go back to Iver, Juno and Eyvind. A long journey awaits them - the heroes want to reach Ridgehorn. 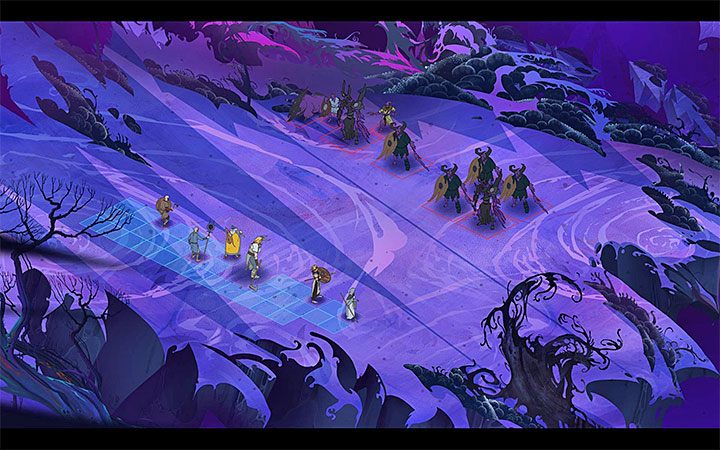 Folka informs you that the party members need rest. The game tries to hurry you up by telling you that you can lose advantage over Bolverk. However, his forces still outrace Iver's caravan even if you refuse to rest anywhere and refrain yourself from other time-consuming activities (this happens after you reach Godstone Denglr).

As for the conversation with Folka, all three variants lead to a battle with the Warped. The only difference is that your party gets ambushed by more monsters if you decide to give the order to get a full rest (the first option).

Eliminate Warped Scourge first - these enemies can steal Strength and Willpower from your heroes and use them to become stronger. You should also pay attention to the number of turns left for the reinforcements to arrive. Winning the fight within the limit can be more difficult compared to previous fights of this type. Defeating one wave won't give you a victory - this is a battle where enemies are attacking you in waves. Expect new powerful Warped in the second phase (a Warped Scourge will certainly be among them). Defeat them to receive Jeweled Petal Ring (level 12 item; additional damage to targets who have lost armor points provided that the archer didn't move during that turn; +3 Willpower; +1 Willpower per turn; +2 to Willpower talents' rank).

Speak with Folka. You can be on her side or be more diplomatic. None of the dialog lines have important impact on the story. 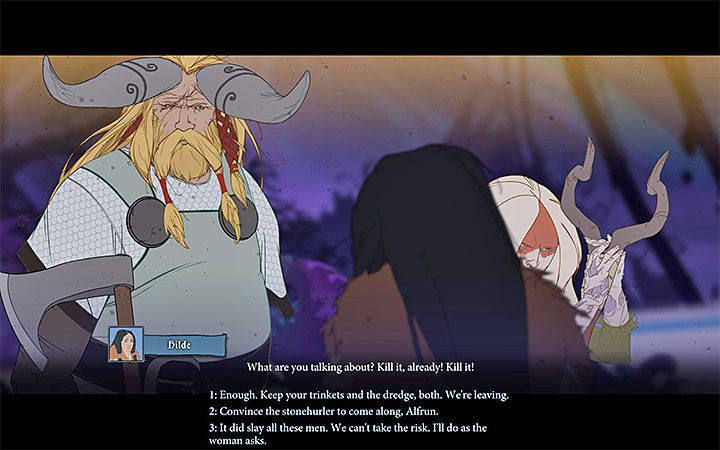 Your characters break a camp near the Godstone. You can visit the heroes' tent and use the option to rest. Iver's party doesn't have to worry about supplies. Each day spend on resting increases the party's morale but you also lose your advantage over Bolverk. The best moment to rest is when your party's morale is rather low.

During your time in the camp you can also have an optional conversation with Folka and Alfrun. You don't have to make any important decisions during them. Try to use every available dialog line. 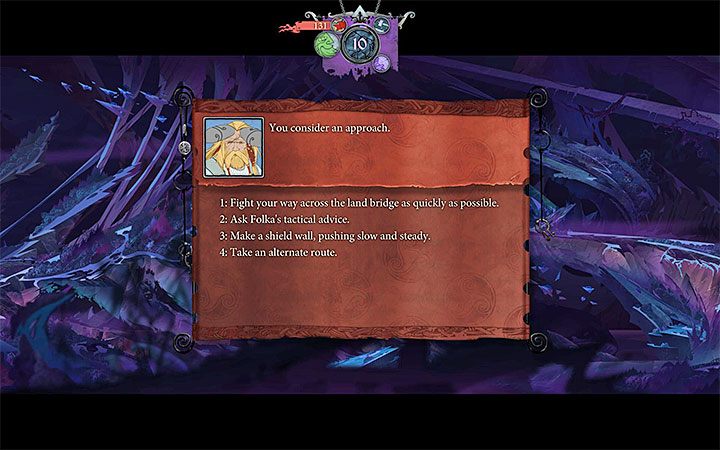 Regardless of your decisions, Bolverk's forces will still outrace your caravan and stop you. The game gives you a few options (see the picture above):

One of the scenes during the journey can be about finding monster eggs. If you allowed the Castaway to join you then you can let her to take a closer look at the eggs. This will unlock Eww achievement. Destroy the eggs if you don't travel with the Castaway - this will improve your caravan's morale.

Another scene is a conversation that can be triggered after breaking a camp. Krumr will be one of the characters who will participate in this scene. Choose the last dialog option to improve your party's morale. 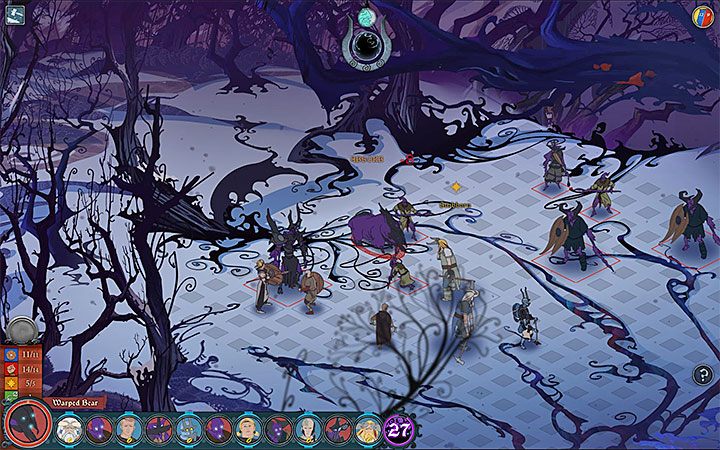 The party reaches Warped Wood. You have to make a decision regarding the way you want to proceed through the forest. You can also ask Folka for advice. Choose the option that allows you to go through the forest by using a defensive formation. Don't choose the option to rest before you enter the wood - this can lead to death of one of your heroes. In our case we have lost Mogun.

A bigger battle awaits you. Your party starts surrounded from both sides by the Warped. This battle also has a small hindrance - you can't place your party members closer to each other. The battlefield has squares that consist of 4 tiles which means that each Varl will take one of these tiles. Place stronger heroes closer to the monsters. Support and ranged heroes should be placed on squares that are located southernmost.

This battle consists of a few phases. After defeating one wave you can decide to either flee from the battlefield or continue fighting. Don't forget to switch heroes who have suffered serious injuries. The total number of waves is three. Defeat all the Warped to receive Horn of Toivonen (level 11 item; +1 to Willpower to all allies if a hero who has the horn stands no further than 2 fields from a hero who has killed an enemy; Divert; +1 to Willpower; 1 Willpower point regeneration per turn). 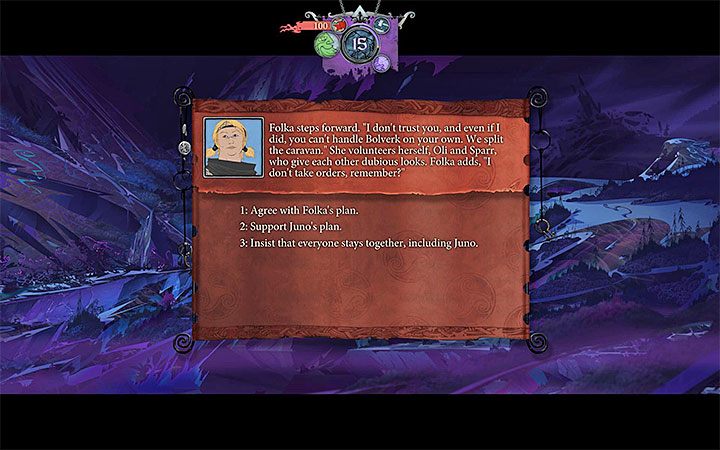 Your party breaks a new camp during their journey to Ridgehorn. Your choices don't matter here. All of the options lead to a long conversation with Alfrun. You can let her to tell the full story or refuse. There are also a few optional conversations in the camp - with Eirik/Valgard and Bersi. Besides that, you can also check the heroes' tent or order your characters to rest (remember that every rest skips the time by 1 full day).

The part where your party notices Ridgehorn tower marks the moment of an important decision. Juno wants to move ahead in order to distract Bolverk. You can: 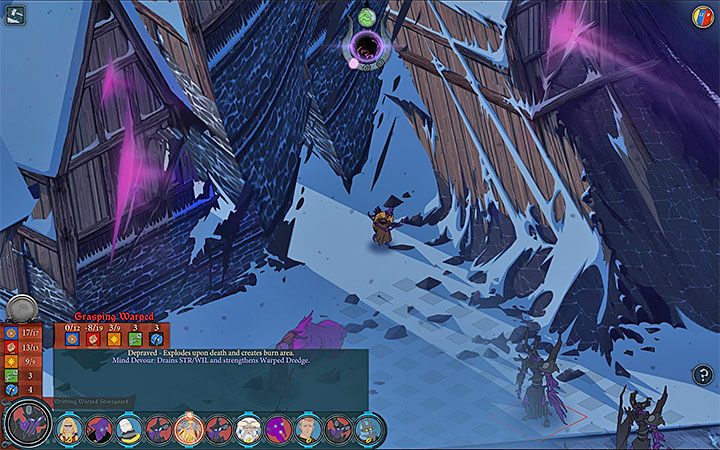 The main battle happens shortly after you enter Ridgehorn. You can choose only from the heroes who didn't move ahead. New enemies will appear every few turns. Sadly, you can't stop them in any way. Good news is that Warped will stop appearing after some time. Also, enemies who will join the battle are rather weak.

Heroes that left the caravan (Juno, Folka Oli and Sparr or only Juno) will soon join the battle. This means that you can get one (only Juno) or four new heroes - this should help you survive the battle (it is highly probable that heroes who were fighting since the beginning are now weakened). 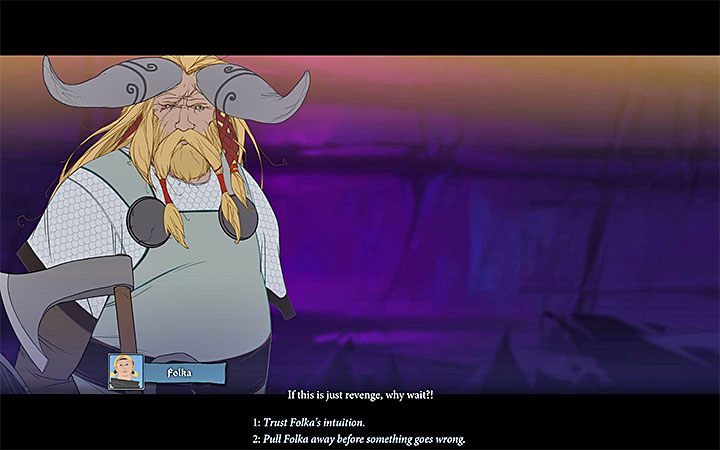 You are now in the ruined town. Use this chance to level up/equip your heroes and to have an optional conversation with Sparr. He will give you Gold-boar Tusk (level 13 item; -1 to movement, 80% of the maximum chance for a hit; increased resistance to damage; +3 to attack strength and interruption).

Click on the tower to reach the finale of this chapter. Speak with Juno first. After that Bolverk will appear. You have to make an important decision - this moment is presented in the picture above:

This is the end of the chapter.