The chapter contains a walkthrough of chapter 18 of The Banner Saga 3 - Alas, the Sea is Still Deep and Wide. In this chapter, you will again assume control over the caravan led by Rook or Alette. The chapter continues the thread of the Arberrang siege and includes a duel with a boss - Ruin. 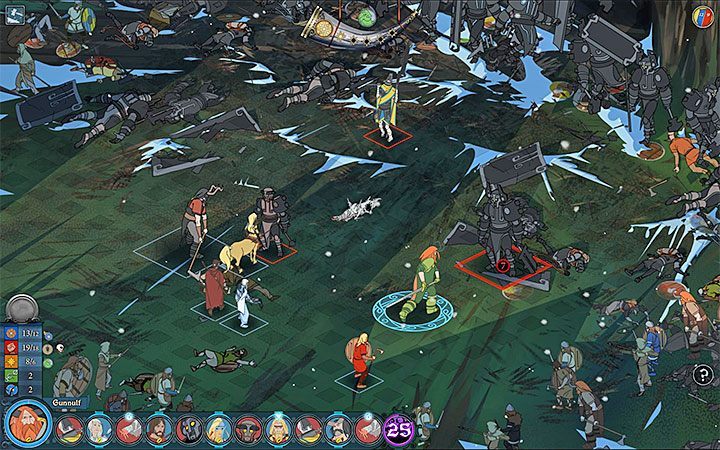 The chapter begins with a meeting with Rugga, who's held hostage. The dialogue options for this particular conversation don't matter too much, but there's a unique option that allows you to beat Rugga. Regardless of your choices, the meeting will be interrupted when a fragment of the wall is destroyed by a huge anchor. This will signify the beginning of a fight.

The first battle is similar to one of the previous encounters: the dredges will attack in waves. You can repel the first wave and escape or try and last till the very end. During the initial stage of the fight, you should be particularly mindful of the powerful annihilator - destroying his armor first is a good idea. Unusually, you also fight with creepers, who can hide and ambush you. The monsters are not very problematic, but they can stop you for a while during exploration. Also remember about the number informing you about reinforcements arriving. Try to eliminate all dredges before that happens.

If you want to play the entire battle, you will have to deal with three waves of dredges. The thing is made a bit easier by the fact that the enemies only arrive from one direction - the crack in the wall. On the other hand, every subsequent wave will see you facing more powerful enemies - try to attack them with a couple of your characters. Should you survive till the end, you will be rewarded with a Meadspring Bottle (12 level; +1 will and defense per turn; +1 defense break; defense against death, as long as strength is not equal to 1; -2 attack strength). 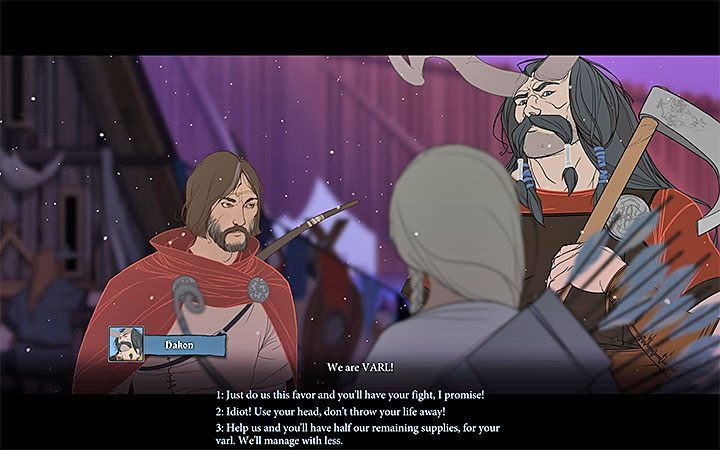 After the fight, the protagonist should be stopped by Tryggvi. Don't quit this conversation too soon. Allow Tryggvi to ask his questions and have a drink together. For managing to bear through the entire conversation, you will be rewarded with Tryggvi's Necklace (8 level; +20% critical hit; +3 to all talents rating).

The next encounter will include Oddleif, Hakon, and Fasolt and it will result in a substantial group of Varls joining the caravan. The latter part of the meeting is the most important (the picture). You can: 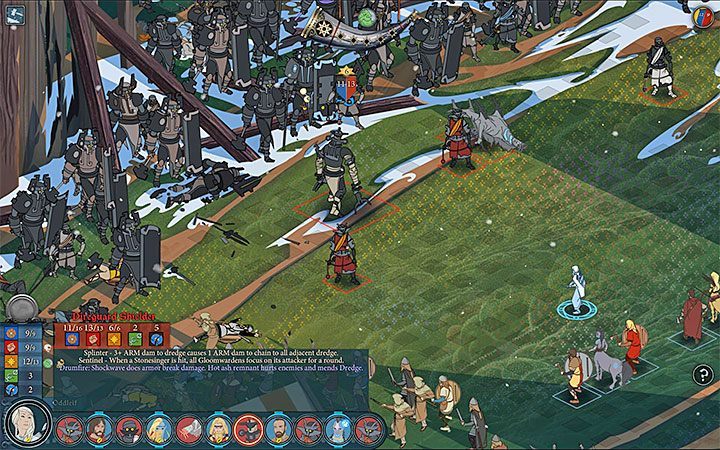 Click on the gate to start patrolling the walls. The first battle with the dredges should commence soon. The biggest threat is the biggest monster with a shield (Direguard Shielder). This unit can use abilities like, e.g. Drumfire which causes a shock wave. Don't place your heroes in a straight line on tiles that were damaged by a shock wave because they can lose single Strength points. You also have to keep your eye on the dredges with slingshots, since they can fling explosives.

After you win, you can resume the patrol and should soon encounter characters attempting to mend the walls. You can help them (you will lose some time), designate clanmates to do the works (the caravan will lose 20 people) or ignore them and keep on patrolling.

After reaching the harbor, you will learn of the deserters trying to escape from the city on boats. You can let them do that, despite being sure they won't survive; disperse the crowd (some people will stay in town, but you will lose some time); or convince Petrus to stop the ships and dismantle them to extract some wood that will help rebuild the walls (many people will stay in the town and you will get more materials but will lose the most time).

You will soon meet Nid. The first two dialogue options result in her leaving. The third choice (calling her a coward) will let you keep her around. 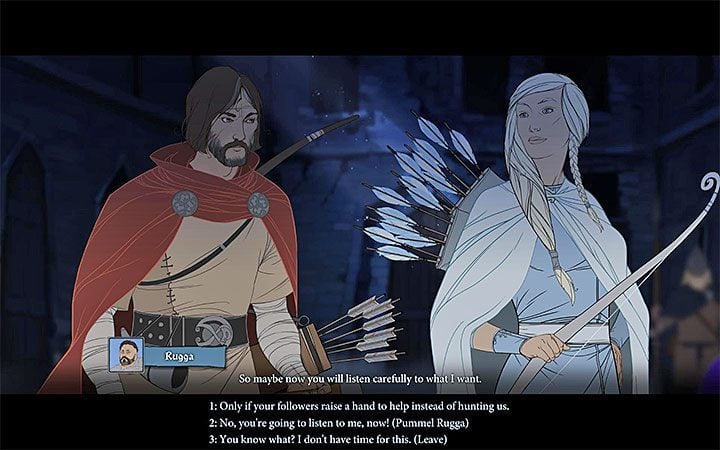 If you've spent too much time helping other people on the patrol, the Rugga's people will catch up with the heroes and kill Egil. You can start fighting them or let Petrus deal with them. If you start fighting, you will have to defeat a small and quite weak group of bandits. However, in this battle it is worth to avoid injuries in order not to have weakened your heroes before the much more difficult battle.

On your return to the grand hall, you will hear the bells ringing, signifying the death of the king. You have to meet Rugga. This is an important meeting, because it has several completely different endings. The decision is made at the end of the conversation (picture above).

After your meeting with Rugga you can also talk to Ludin and Yrsa as an option. During this conversation, it is a good idea to use all the dialog options. No decisions are made here, although the meeting is rewarded with an improvement in the morale of the caravan. 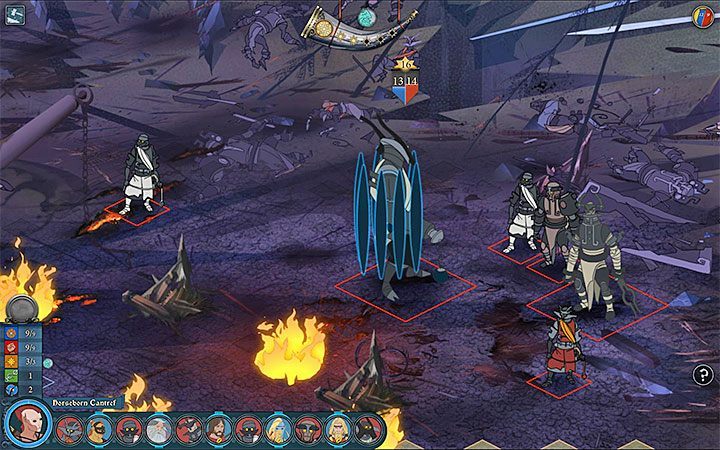 You have to join a duel against Ruin and other tormentors. Before you set off on the battlefield, you can optionally visit the heroes' tent to promote/equip the team members, and also take a look at the marketplace.

This is the most difficult battle in the game. Here are some important pieces of information about it:

The Ruin has a number of unique skills, each of which is troublesome: 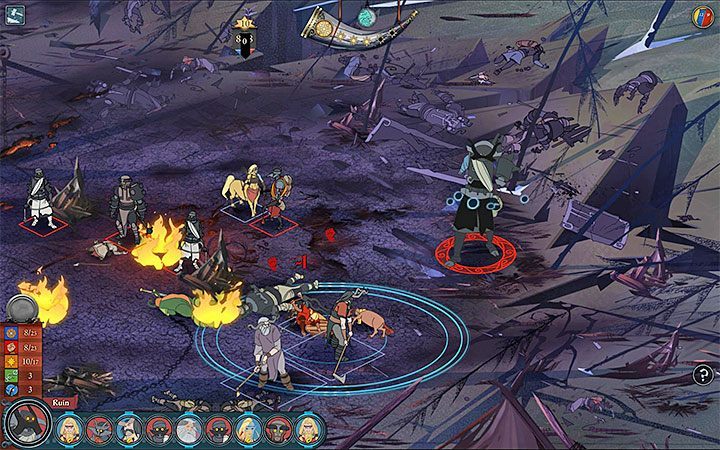 Only after the Ruin has been killed should you take care of the other monsters on the battlefield for good. For defeating the boss, you will receive the Ruined achievement. At the very end of the day, you will have a conversation with Oddleif and Ubin, among others. After that you will advance to the next chapter of the game.