This page contains the description of the sixteenth chapter in The Banner Saga 3 - The True Hero Comes Reluctantly. This is the opening chapter and it focuses on Rook's / Alette's caravan. The entire chapter takes place in Arberrang. 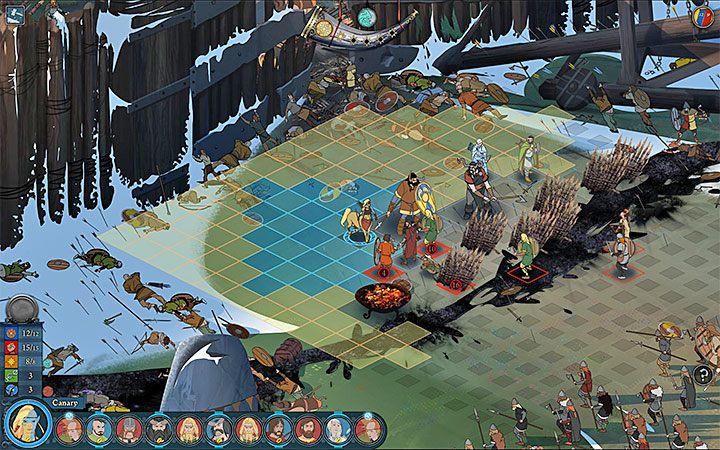 The chapter begins with conversations with Oddleif and Aleo. However, you don't make any important decisions during them.

After that you will participate in the first battle. You have to defeat Rugga's forces. The barricades that separate both sides of the conflict are this battle's unique feature. You can destroy them if you want to play offensively. Otherwise, it is better to "leave" it to the enemies and attack the opponents when they are busy with the obstacles. 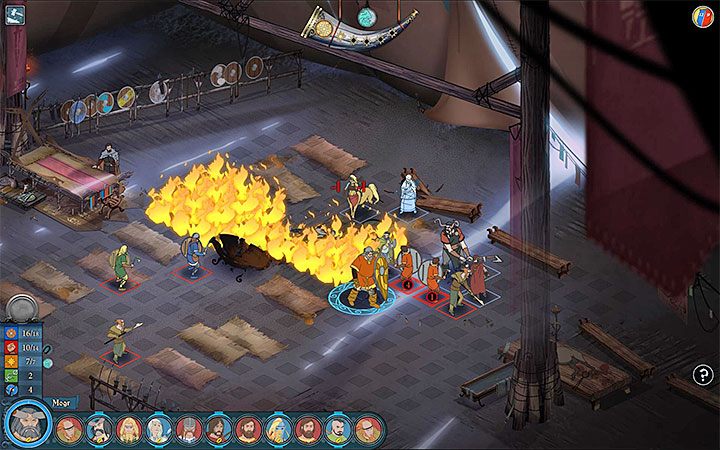 After that Oddleif will attack Rugga's tent. You must participate in another battle. Rugga won't be present on the battlefield - you don't have to worry about him.

The most obvious obstacle in the battle inside of the tent is fire. At the beginning of the battle the flames will only be in the middle of the map (two fields) but with each turn the flame will be spreading to other fields. Touching flames won't lead to instant death but it will deal a little bit of damage to a character (-1 to Strength/health points every time a hero stands on a burning tile during their turn).. Try to avoid going through burning fields and standing next to them - the fire will spread to other fields.

After the battle you have a choice - speak with captured Rugga by choosing one of the two dialog lines or break his nose. These choices won't have impact on this chapter. 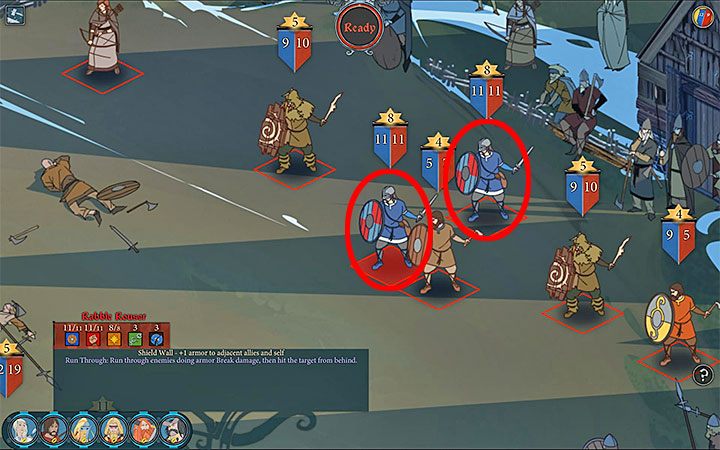 Click on the gate to start moving towards the great hall. At the beginning of this journey you will participate a short (and linear) conversation with captain Petrus.

Shortly after heading out the caravan will be stopped by members of a small clan. You can:

The next "stop" on the way to the great hall is near traders' stalls. You can ignore them or stop and buy artifacts and/or supplies (2 supply units for 1 renown point).

The party will be stopped by a group of drunk people. This initiates a fight. This is another battle that can have unique features. There is a way to end the battle faster - you have to kill all warriors wearing blue clothes - the picture above shows an example. You can also decide to defeat them last if you want to get more renown points for dealing with all enemies (you lose a chance to get Horseborn Rampage achievement).

After the battle you can listen to the conversation with Canary and Oddleif. During it you learn about the massacre. Choose one of the two reactions: 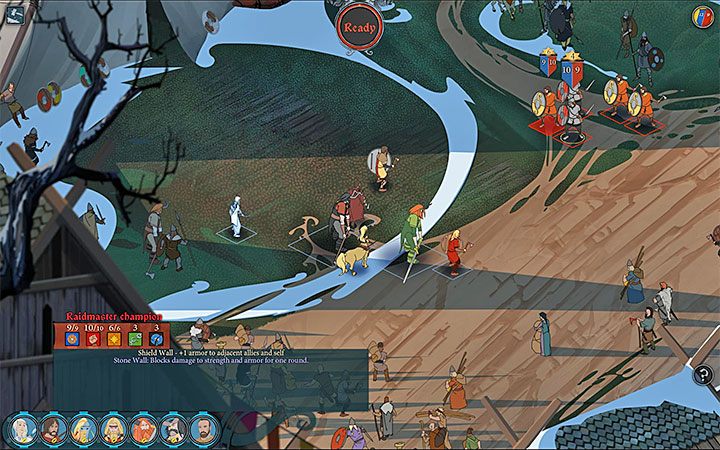 Hakon and Fasolt will participate in the next conversation. The dialog with Fasolt depends on your choices from the previous chapters (e.g. the choice regarding Einartoft). Fasolt and a few Varl should join the party (Fasolt can now participate in battles).

Before reaching the great hall you will be stopped again. A new group of enemies appears. You can: 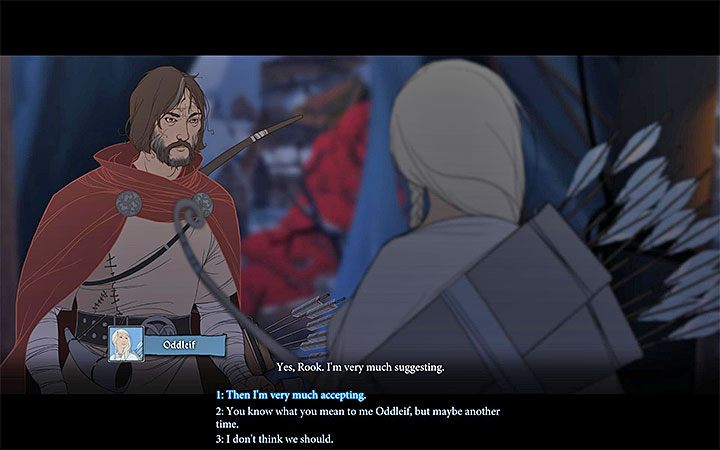 During your meeting with king Meinlof you can comment on captured Rugga but this won't affect the course of the events. Later in the conversation you can ask the king for food and supplies, new warriors and a place to rest (all of this is optional).

On the town's screen you can visit the heroes' tent to distribute renown points, and go to the market in order to buy artifacts and/or supplies. You can also have an optional meeting with Oddleif.

When you are done, click on Petrus icon to move to the main character's tent and to initiate a conversation with the captain. Soon, Oddleif will arrive. If you play as Rook (and you didn't lower your relations with her), you will be able to have an intimate moment with Oddleif (the dialog line presented in the picture above). This choice rewards you with Shipped achievement.

Regardless of your choices in the hero's tent, the chapter will end.