This page of our game guide to Marvel's Avengers contains a description of the boss fight with MODOK, the game's final boss. You can find out when you will confront MODOK, what attacks the boss has and how to avoid them. Also, we explain how to defeat him effectively and quickly.

You fight MODOK in the final stage of By Force of Mind, the last mission of the game. The fight with this boss will be the longest battle in Marvel's Avengers - it has been divided into 6 phases. During each stage of the fight against MODOK, you will take control of a different Avenger and perform a specific task.

In the first phase play as Iron Man, and your task will be to destroy the engines that keep MODOK in the air. MODOK has four engines attached to the bottom of his suit. 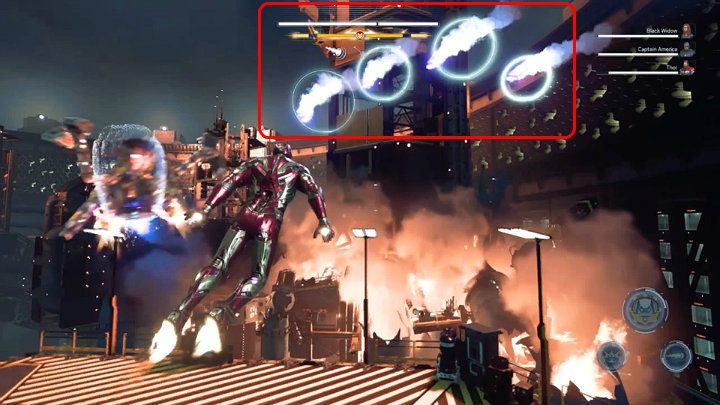 Unfortunately, this task will be more difficult than it might seem, as MODOK will continually move around and fire rockets at Tony. Avoid or destroy them with repulsors. 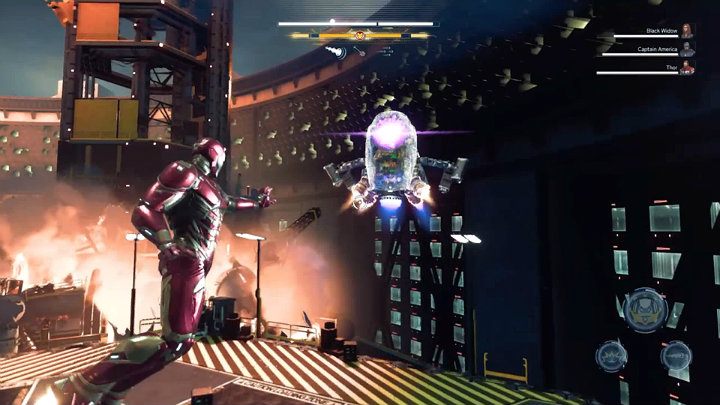 Your best chance of hitting the target is when MODOK stops for a moment to shoot lasers. The crystal on his forehead will then turn purple - you get a few precious seconds to attack. 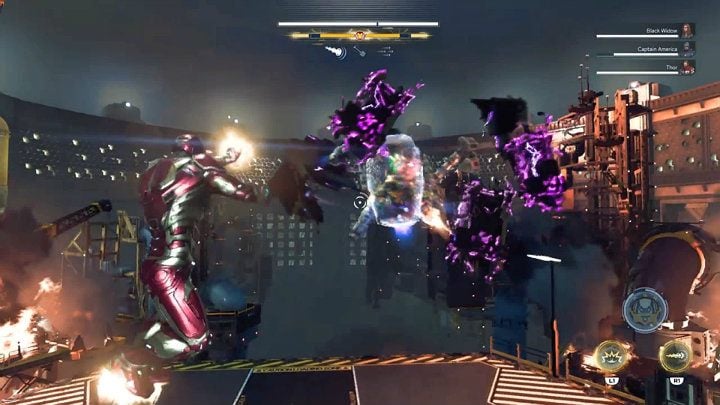 When the first two engines are destroyed, the opponent will get surrounded by an additional shield that can block Tony's missiles. Hitting the target will become a bit more difficult. Fortunately, individual elements of the shield can be shot down. After all the engines are destroyed, you will proceed to the second phase.

In the second phase you play as Captain America, and your task is to destroy MODOK's terrigen power source. 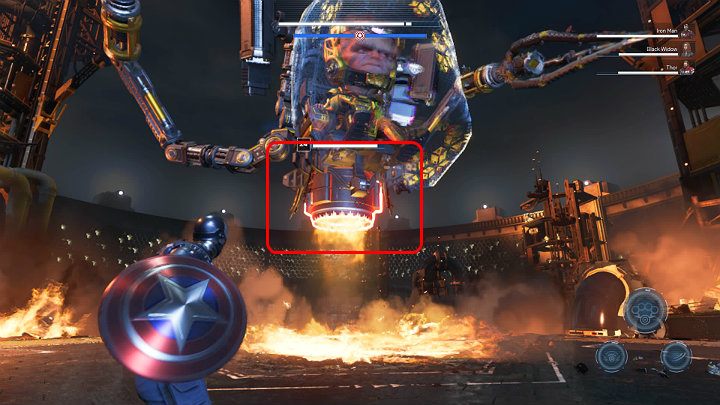 MODOK will be floating in the air all the time, so aim at the engine at the bottom of his suit and throw the shield at him to knock the boss to the ground. 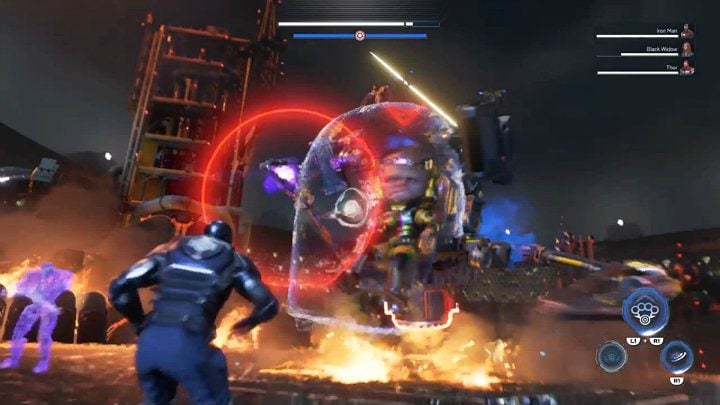 While you are attacking MODOK's engines, you must also constantly avoid the boss's mechanical arms, which have a really long range.

MODOK's attacks are strongly telegraphed. Pay attention to the red marker above his head and the red outline around his mechanical arm - it is about to fire in the direction of your hero. 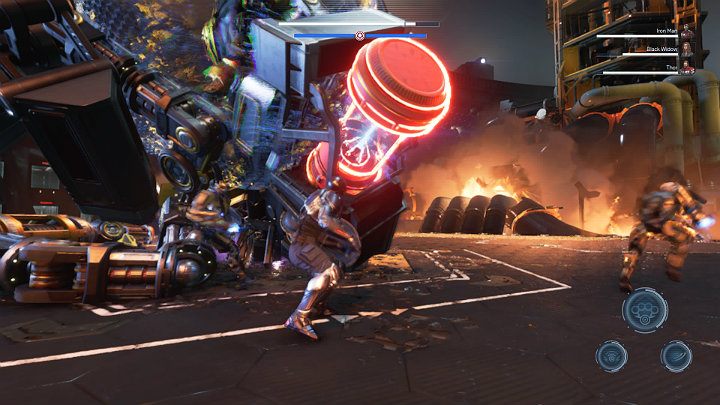 When the engine is destroyed, MODOK falls to the ground. You can now attack the power source on his back. Try to deal him as much damage as you can. 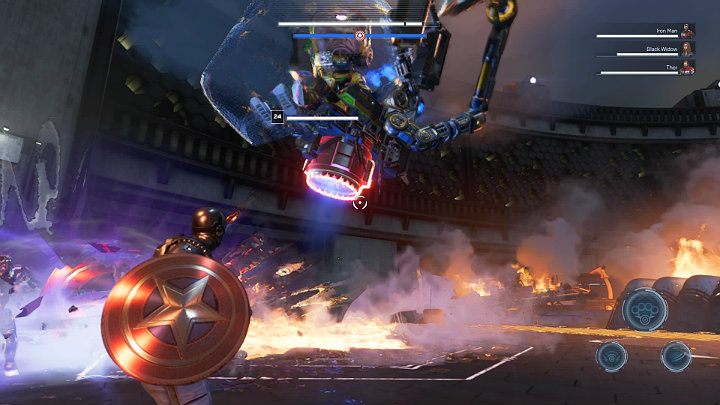 After some time, MODOK will fly up again. You have to attack the engine to knock down the opponent and then attack the power source. Repeat these steps about two more times to completely destroy the power source and proceed to the next phase.

You play as Thor, and your task is to fight opponents who will appear on the platform. You have to recharge Bifrost heroic ability. 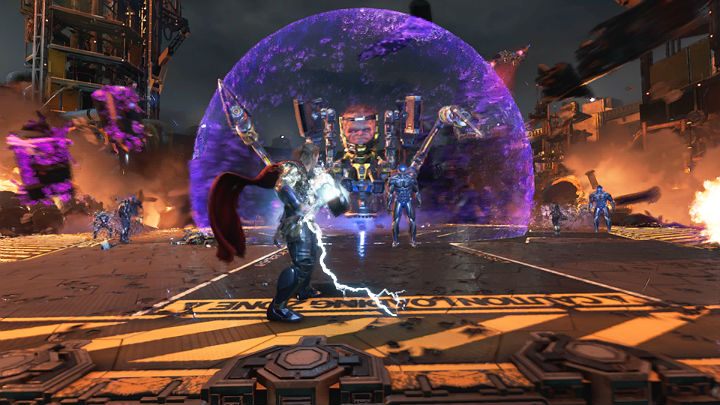 Pay particular attention to the Adaptoids - they can cause you the most problems. There will also be many other regular enemies around. 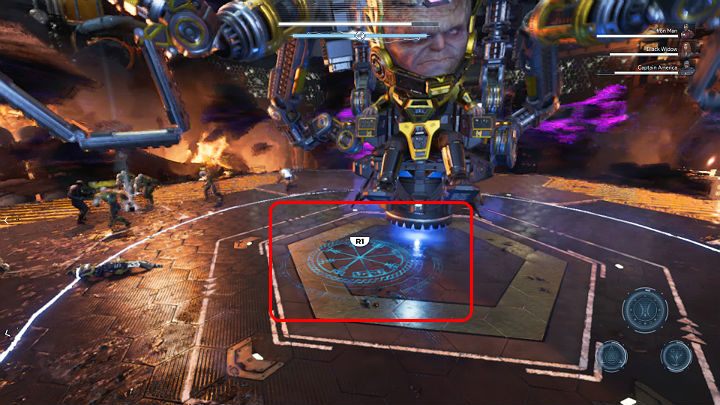 Once the Bifrost is charged, use this ability on MODOK to advance to the next phase.

Fourth phase of the fight

In the fourth phase of the fight, you take control of another Avenger, the Hulk. Your task is to fight against numerous enemy troops. Kamala Khan will support you. 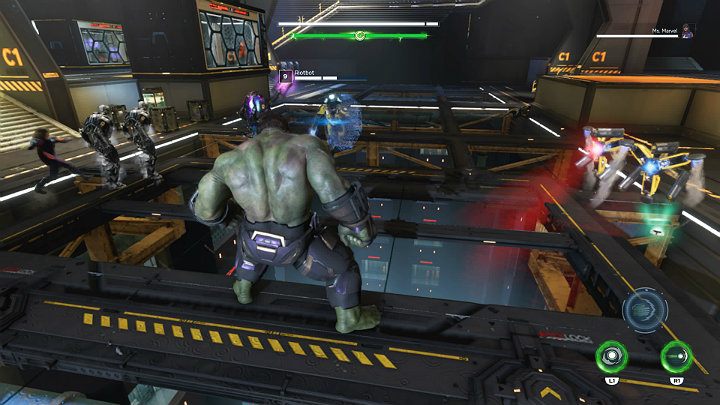 Try to make a good use of the Hulk's rage to parry opponents' attacks, increase your defenses, and regenerate lost health. 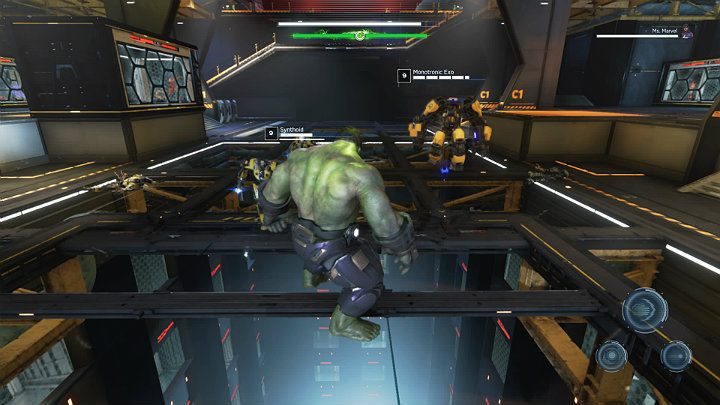 Pay special attention to Cryo Synthoids, which can immobilize your hero and expose him to attack, as well as to Dreadbots and soldiers in exos. 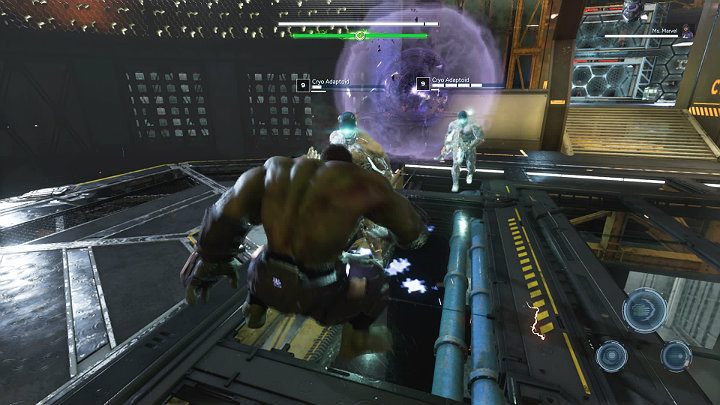 Later, Adept Adaptoids and a new type of opponent, Cryo Adaptoids, will appear. You have to be especially careful about the attacks of the latter - they can immobilize your hero and expose him to attacks. After the fight is over, you move on to the next phase of the battle.

Fifth phase of the fight

You now fight as Black Widow and your task is to destroy MODOK's crystals. Prepare for a test of your shooting abilities, because you can only rely on a range weapon during this fight. 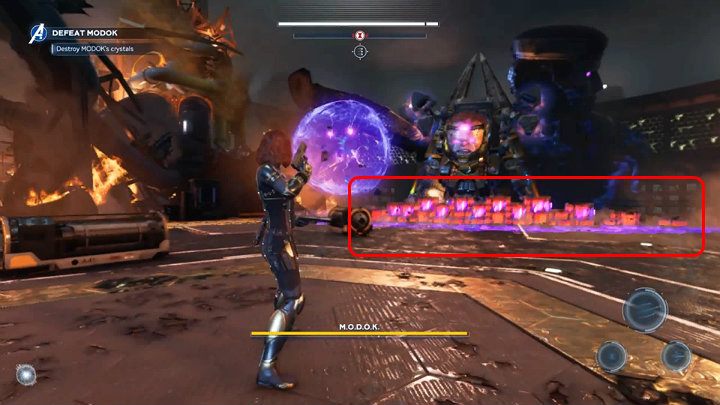 The opponent will send an attack in your direction that looks a bit like a wave. Jump over it to avoid damage. 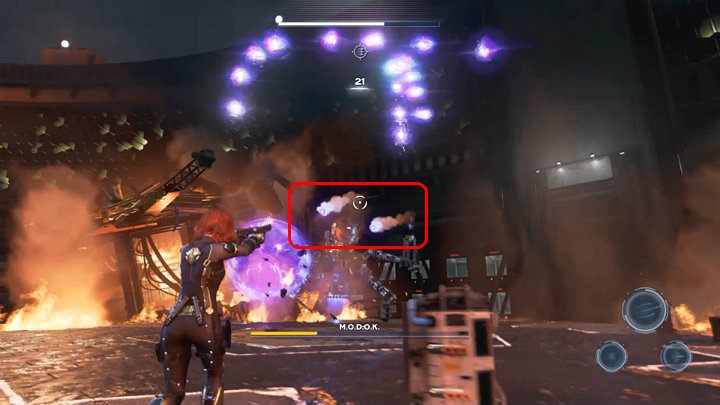 Rockets fired by MODOK can be destroyed with a range weapon. They fly quite slowly and leave a visible streak behind them. 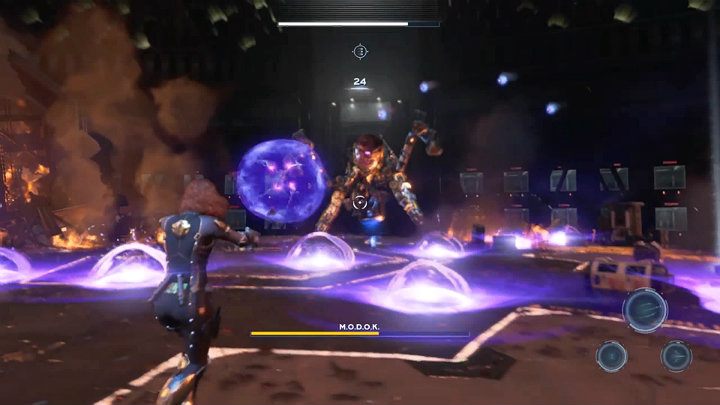 MODOK will also fire energy balls that remain on the ground for quite some time. When you step on them, Natasha will get immobilized. 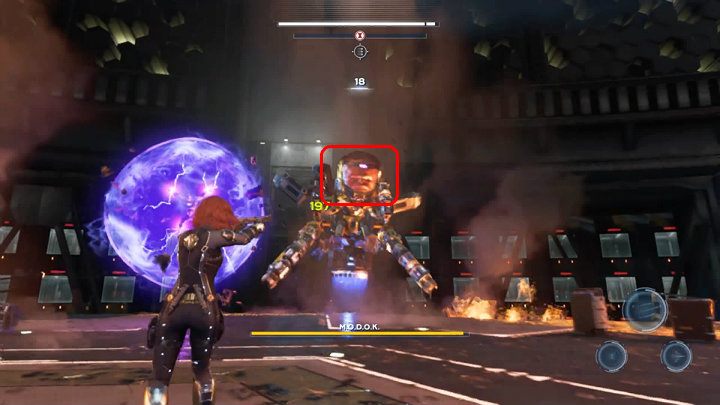 During the fight, you have to aim at the crystal on MODOK's head to damage him. Shooting the armor won't do any damage. If your opponent starts to protect himself with the previously captured Captain America, you'll have to find another shooting position. 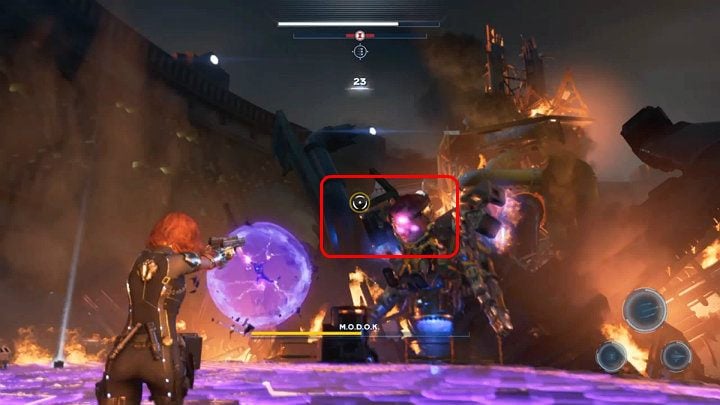 When the opponent starts to rotate around the arena, aim slightly ahead of him to hit the target. 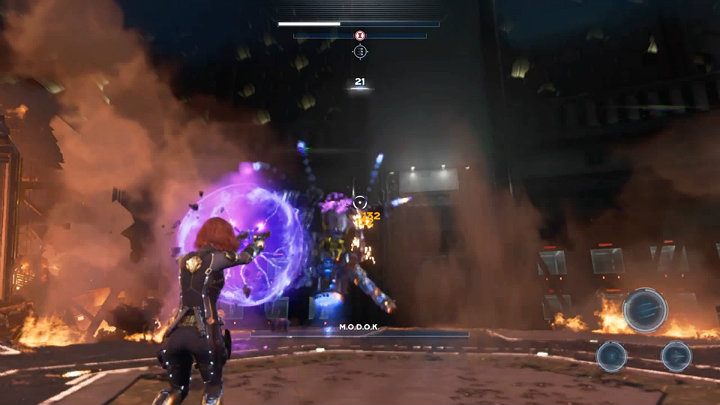 Keep fighting until the crystal on MODOK's head is broken. You will proceed to the final phase of this battle.

Sixth phase of the fight

In the final phase of the fight, you will play as Kamala Khan. Your task is to reach Bruce Banner within the time limit and fight the Kree guardian. 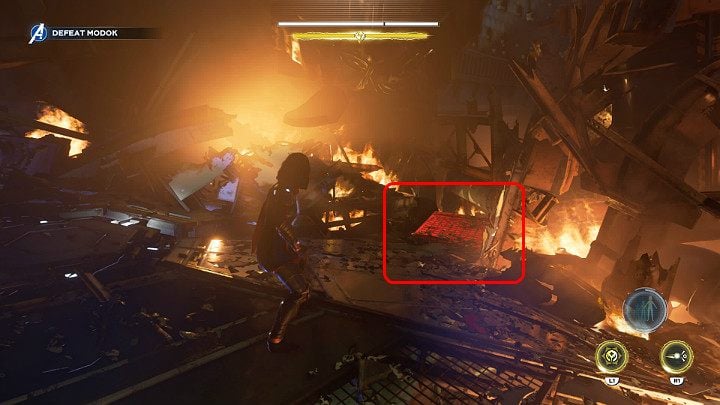 As you run towards Bruce, turn into the passage on the left - the correct path is marked with the red element on the ground. If you go right, you will jump into a gap and fail to reach your destination. 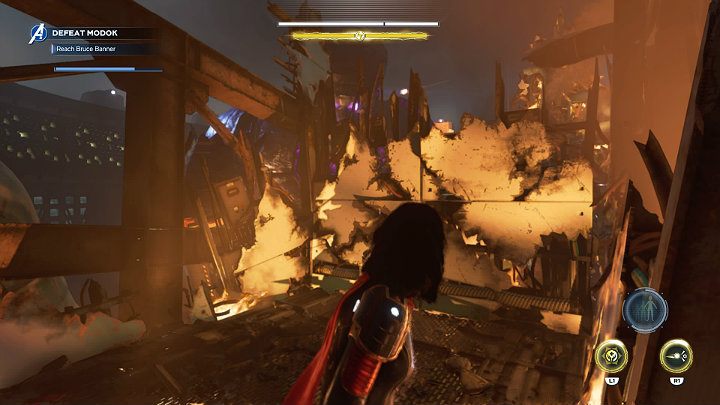 After a short while, you'll reach the barrier separating you from your objective. Break it down with an enhanced attack, then eliminate several enemies. Go forward, break another wall, jump onto the platform, and then jump from the protruding metal element to reach Bruce. 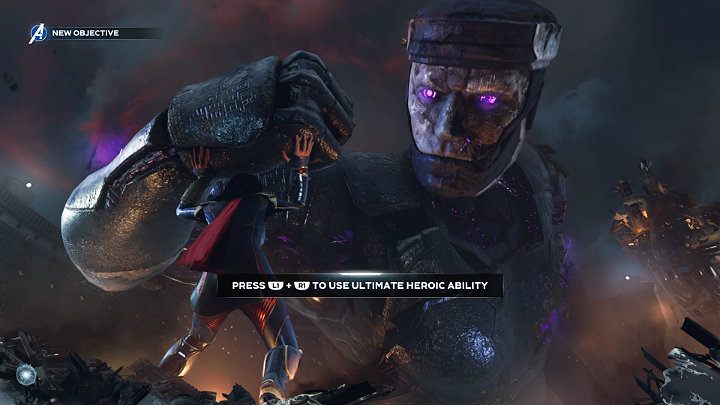 The final stage of the fight is a quick time event, during which you will have to press certain buttons at the right time. You can now watch the final cut-scene.