This page of our guide to Marvel's Avengers has a detailed walkthrough of the eighteenth campaign mission. During it, you will have to return to Manhattan to rescue Inhumans from the AIM. In the final stage of this mission, you will face a boss - Warship.

During Mayhem over Manhattan mission, you will also have an opportunity to complete optional side objectives for which you can get additional resources and equipment. When the Tactical Awareness gets activated, all secondary objectives will be marked with question marks on the UI. We briefly explained the types and objectives of side missions, as well as what can be obtained from them. Also, we have described in detail the main objective of the mission.

Here are the stages of the Mayhem over Manhattan mission:

In the first stage of the Mayhem over Manhattan mission, you will have to locate all the containers and warehouses in which AIM is holding Inhumans. 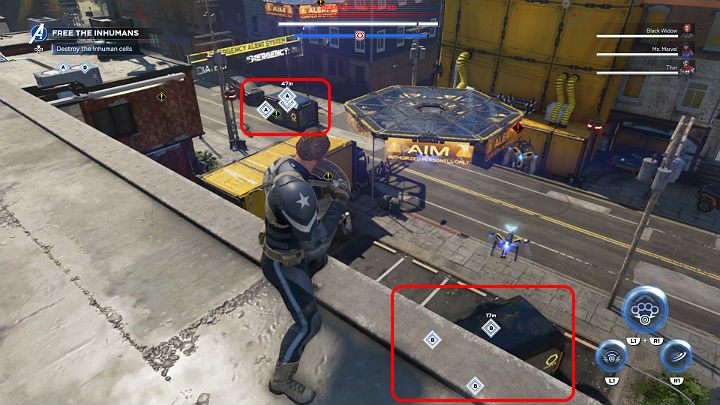 You can find two containers by walking through the center of the map. When you get close to these objects, the area will be full AIM soldiers and Synthoids. 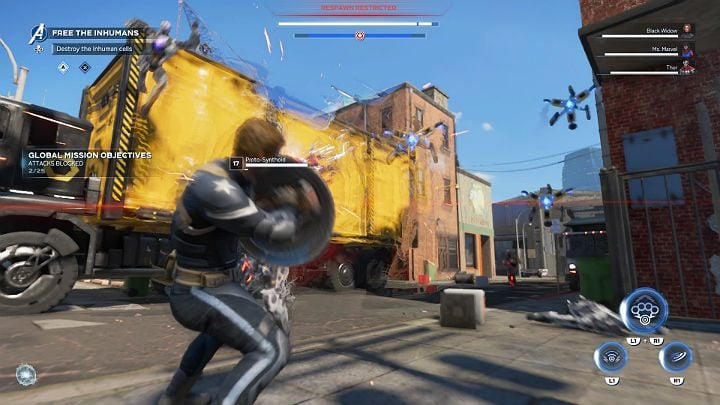 Get rid of flying units and drones first. Missiles fired by enemy units can be blocked with a shield. 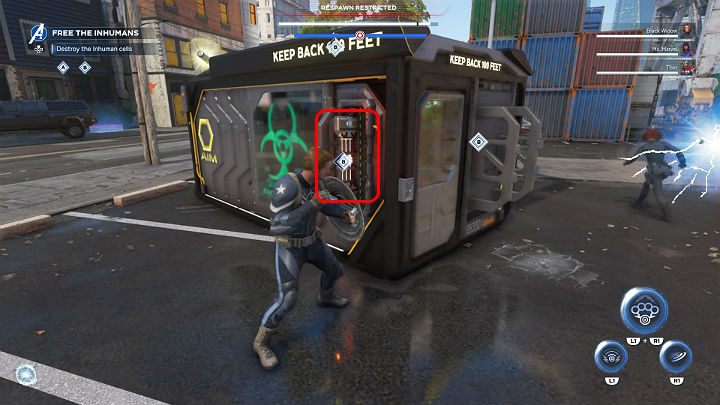 After the fight is over, destroy the two batteries on both sides of the first container, then do the same with the second container. 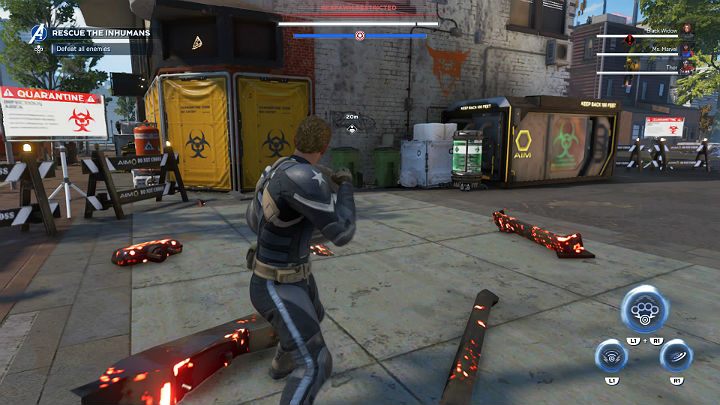 Another kidnapped Inhuman is locked in a warehouse in a building with yellow fabrics with a distinctive sign. 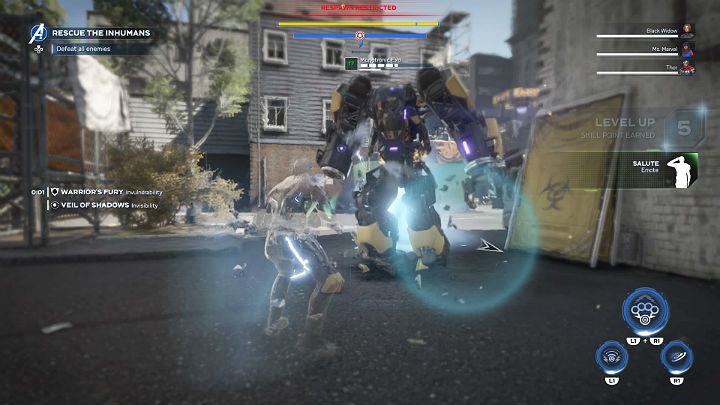 The entrance to the warehouse is guarded by a soldier in an exoskeleton. Beat him, and the door will open. On the left side of the room, you will find one equipment chest. 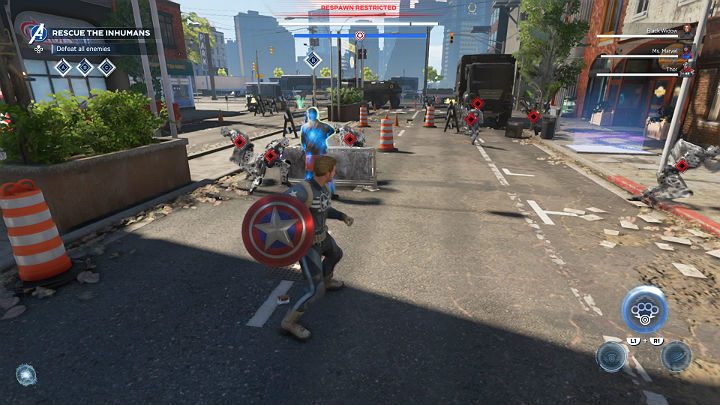 A little further to the right of the map you will find more people to save from the AIM soldiers - help them in the fight, then go to the Inhumans hideout.

Dr. Hank Pym sent his agents to Manhattan to escort the surviving Inhumans during the evacuation. You need to get to their hideout and get them out of there safely. You'll have to face the Watchdogs division along the way. 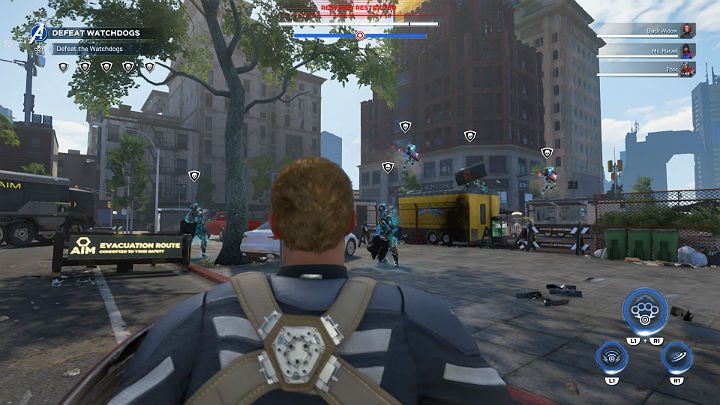 Gun turrets placed on the roofs of cars and on the streets are your priority. The same goes for flying opponents - they can cause you problems during the fights with ground units. It is worth noting that the Watchdogs have a Nanite shield making them much more durable. However, a few Hero Abilities should be enough to defeat them. When your hero's willpower drops dangerously low, smash one of the green containers to restore the health. 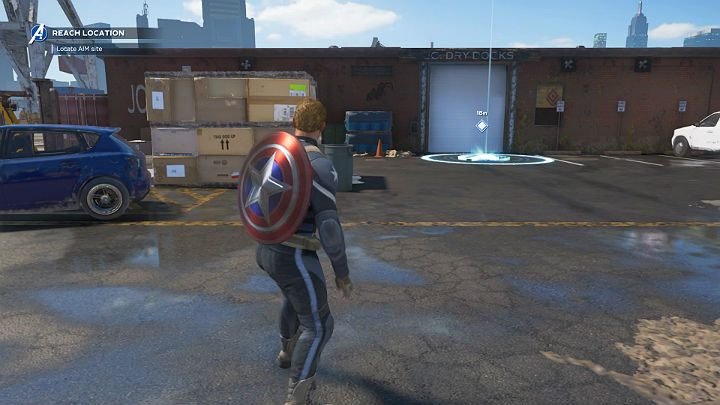 After the fight is over, run across the bridge to the main mission marker - you will reach the Inhumans' hideout. Go into the room, talk to one of them, and get ready to fight the boss.

Shortly after saving the Inhumans from the hands of AIM, the opponent used its another trump card - a massive-sized Warship created specifically to detect Inhumans and eliminate them. During your battle with the boss, you will have to constantly watch out for regular opponents who will appear in waves as well as for gun turrets that can restore on the warship.

Attacking the Warship directly will not yield any results. The only way to damage that opponent is to target its weak points to slightly lower its health bar. The Warship will fly over the Inhumans' hideout and release poison gas. Don't stand in the danger areas.

In the first phase of the fight, you must focus on destroying one force field generator and attacking the Warship's weak spots. Watch out for gun turrets located in various parts of the hull. 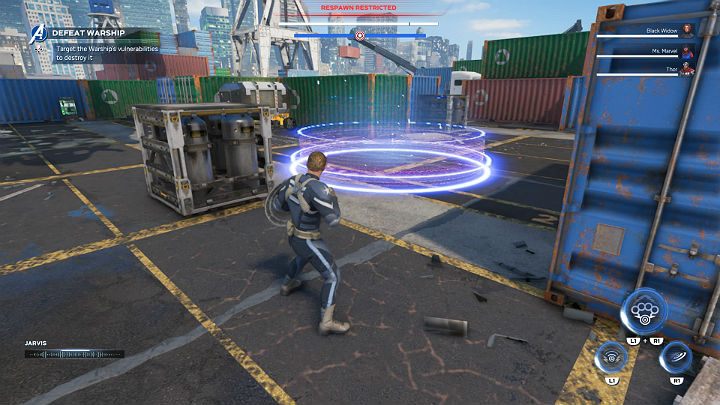 The force field generator is located on top of the ship. You have to destroy it to be able to attack the boss's weak points. You can reach the top of the ship using nearby gravity launchers. 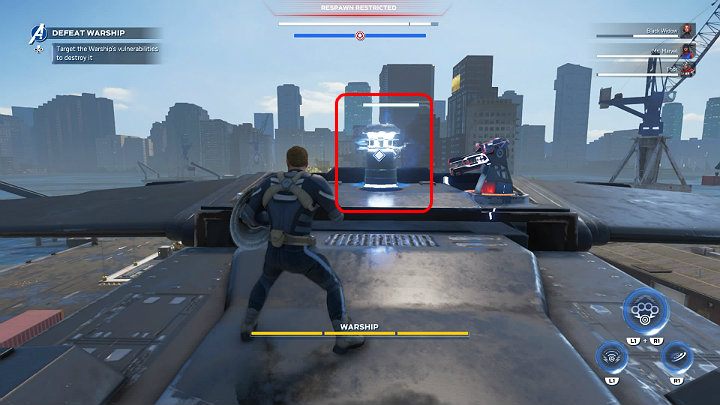 As soon as you land on top of the ship, destroy all the gun turrets and the generator. This will expose the boss's weak points. 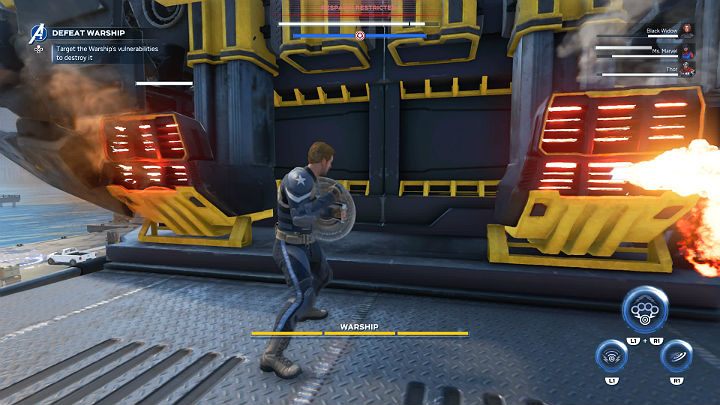 When the generator is destroyed, jump down onto the platform below on one of the sides of the warship and start destroying two overheated vents. When you're done, jump back to the top.

Note that the vents release flames alternately - they can severely injure your hero when he is nearby. For this reason, it is best to switch back and forth when attacking them to slowly destroy these parts. 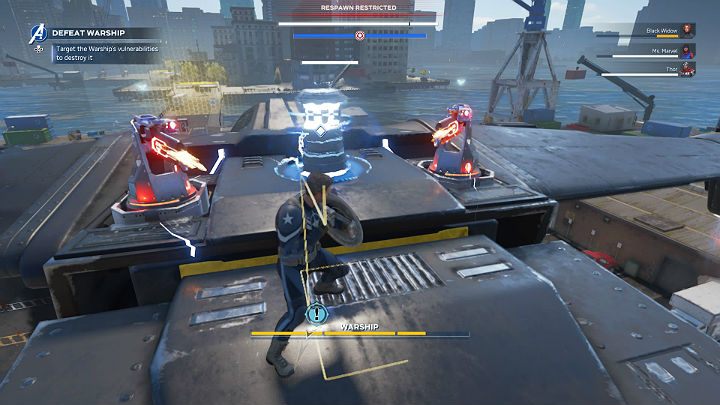 The destruction of the ventilators caused the gun turrets and the force field generator to reappear on top of the ship. Destroy those targets and jump onto the platform on the other side of the ship. 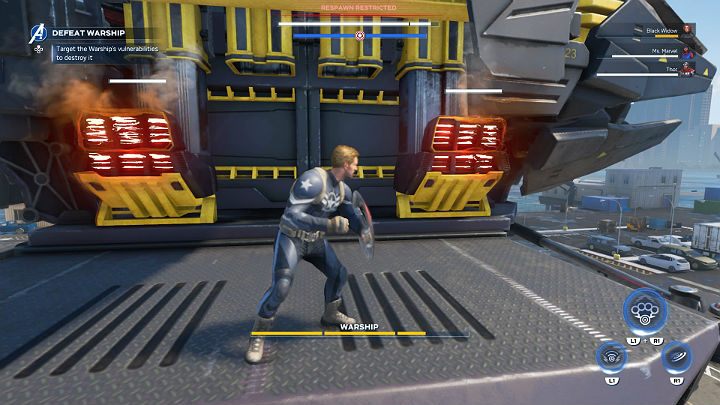 Here, you'll have to destroy another two overheating vents. That way, you'll end the first phase of the battle. DON'T JUMP OFF THE SHIP - climb back to the top.

Focus on destroying the force field generators (this time there will be two) and attacking the boss's remaining weak points. 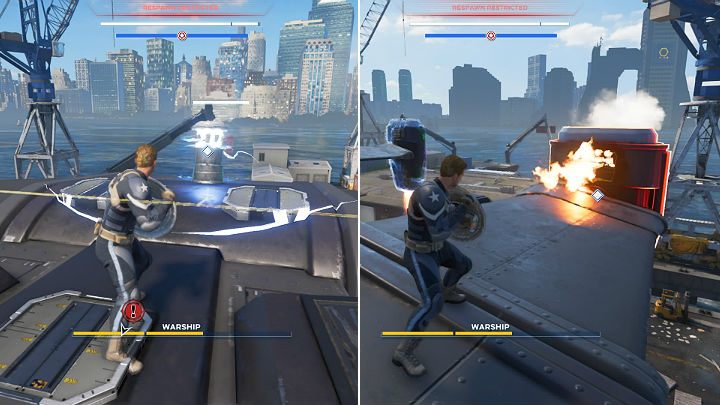 The first generator is located at the back of the ship. Destroy it to expose the vents on the side engines. Break the vents and move to the front of the ship.

Once a generator is destroyed, you have a limited time to destroy the vents. If you wait too long, the engines will be shielded by the force field again, and you'll have to repeat the sequence. The overheating ventilators on the engines will also shoot out flames that inflict heavy damage on direct contact. 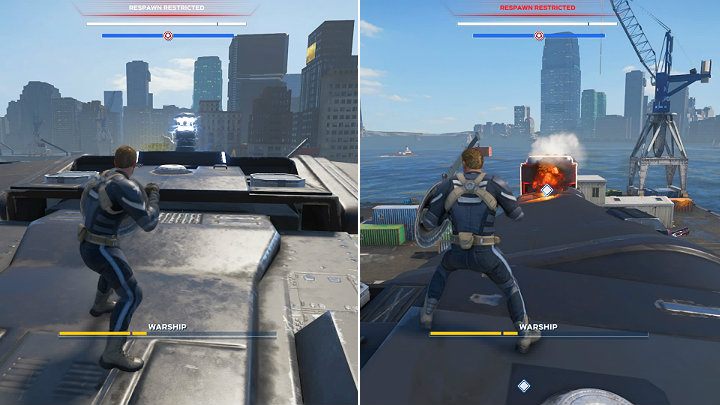 The second generator is at the front of the ship - it will expose more vents on the side engines. Destroy them to advance to the next phase of the fight. DON'T JUMP OFF THE SHIP.

You once again have to locate the force field generators (this time three). Destroy them to end the fight. 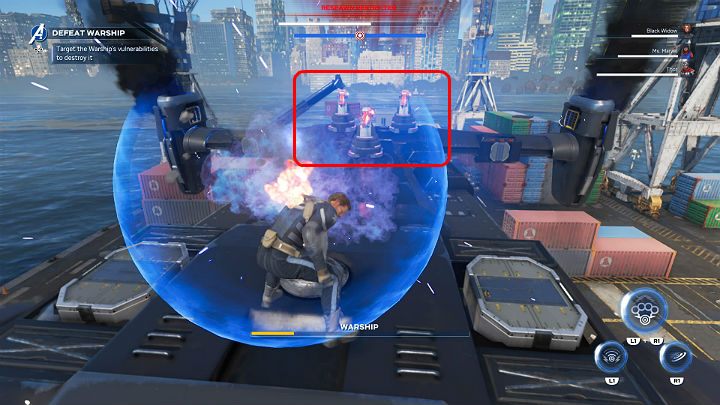 There are 3 large turrets on top of the ship. Destroy them, then go to the other side of the ship. 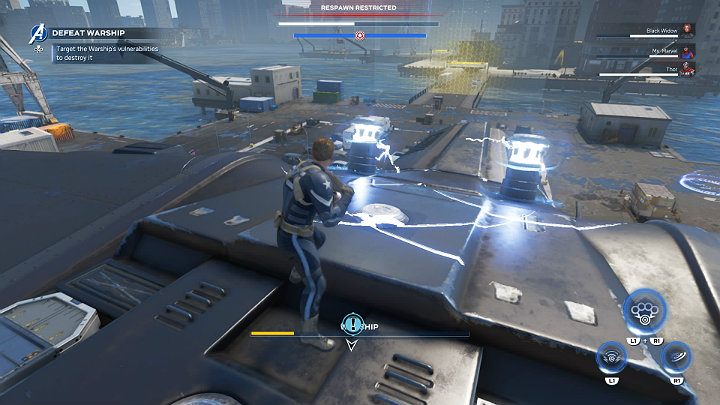 You'll find two generators here. Destroy them as soon as possible, then jump down to the street. 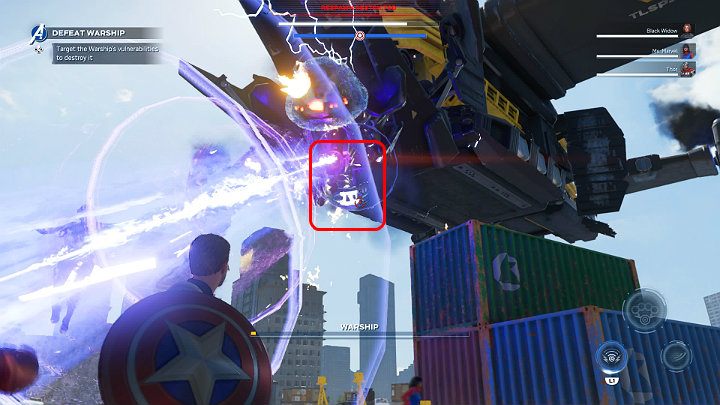 Notice the third generator underneath the Warship. You have to destroy it to expose the boss's eye and have a chance to defeat it. 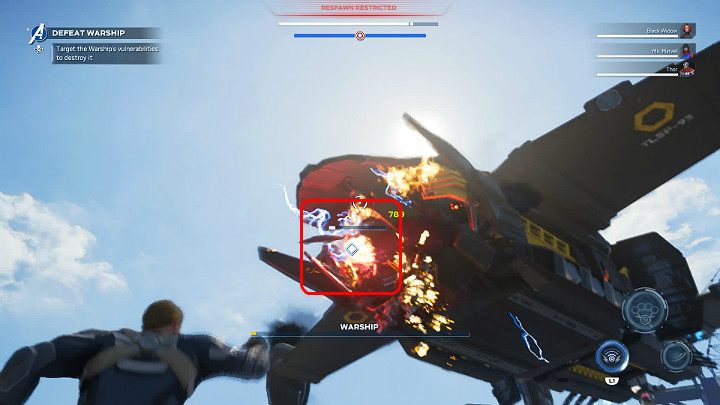 When all three generators are destroyed, you'll have some time to knock down the boss. Attack its exposed eye using ranged attacks to win this fight.

After the fight is over, you'll watch a short cut-scene that will automatically take you to the final mission of the campaign - By Force of Mind.