In the final stage of To stand alone mission, you will have to face another boss - Monica Rappaccini. During this boss fight, you will play as the Black Widow, so try to use her extraordinary speed and ranged attacks. During the battle you will also have to dodge enemy's strikes and her special skills. What's more, after each phase of the boss fight, AIM Syntoids and even Adaptoids will spawn in the area of the battle.

Warbot - first phase of the fight

In the first phase of the duel, focus on performing dodges at the right time and counter the incoming strikes of Doctor Rappaccini. Because you start the duel at a certain distance from the enemy, you will have an opportunity to fire a few shots. 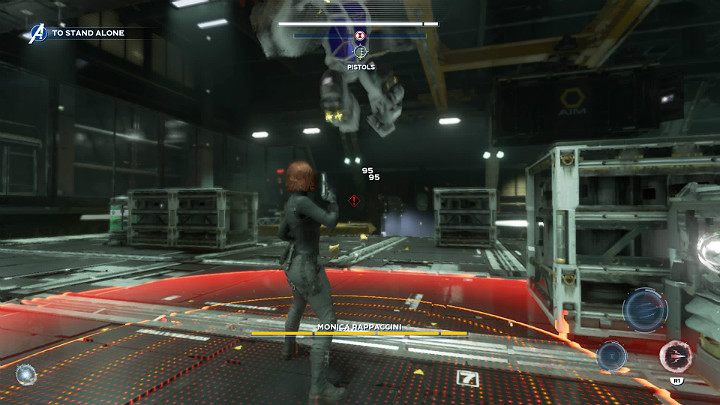 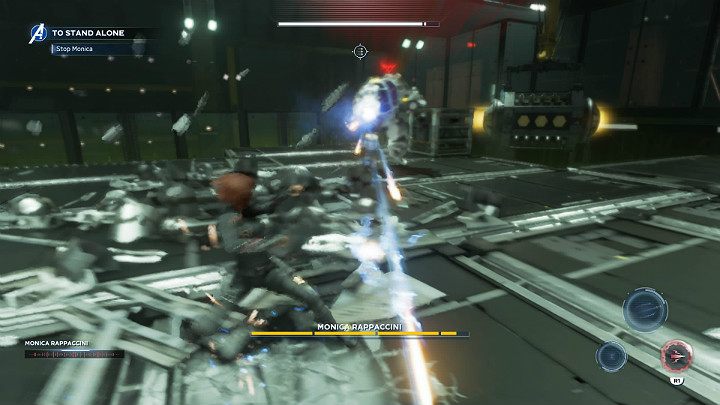 During combat, Monica will use long-range weapon, which was mounted on the right hand of the exoskeleton. The robot will stand still and extend its right hand forward. Then, it will fire a long series of projectiles. At this moment, press the dodge button as quickly as possible and move in both directions in order to avoid any injuries. 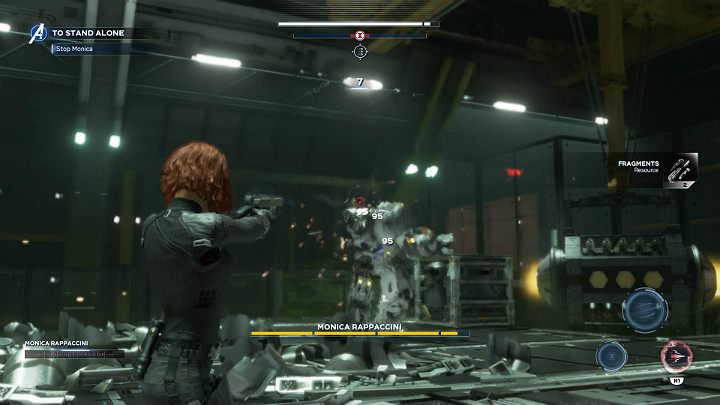 During the first phase of the duel try to make the best use of your ranged weapon - Monica's mech is not that mobile. However, if you engage in melee battle, focus on performing dodges and counter-attacks.

At the beginning of the second phase of the duel, Monica disappears from the range of your sight. Also, AIM drones will appear in the room. Try to eliminate them as soon as possible with a ranged weapon. 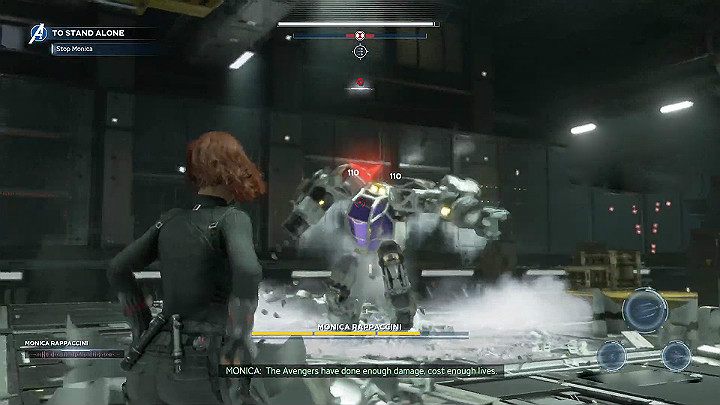 After a while, Monica will reappear. This time she will have cryogenic abilities that can immobilize your heroine. When a red icon appears above the opponent's head and she covers her chest with her left arm, it means she is about to attack you. In such case, you have to be prepared to dodge. The charge leaves behind a cryogenic trail that can freeze Black Widow. 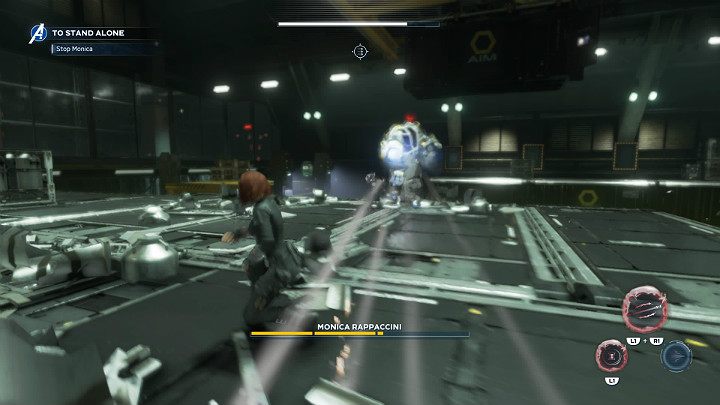 When the mech stands still and begins to charge the cannon it has in the right hand, it is a sign that after a while Monica will make use of the long-range weapon. She will start firing projectiles which leaving behind a white cryogenic trail - you must avoid these projectiles and trails by constantly pressing the dodge button and moving sideways. If you get hit by a few missiles or stand in a trail left by a projectile then you will be frozen. 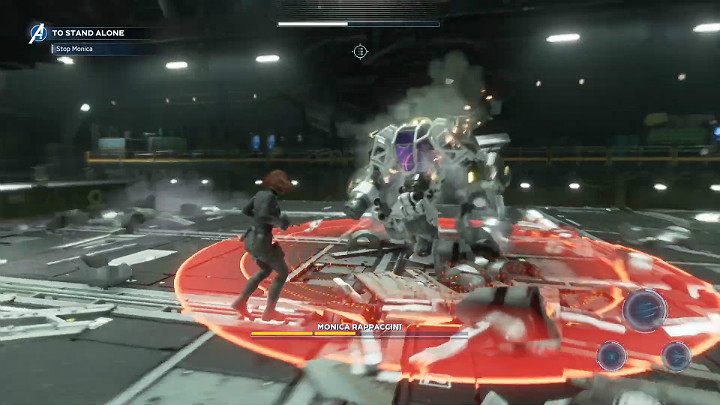 If you get very close to your target during the battle, Monica may try to attack you with her area of effect abilities. When a red marker appears above her head and raises her left arm of the exoskeleton, a red circle will appear on the ground - it is a sign that an impact is about to occur. Don't stand in the dangerous area. 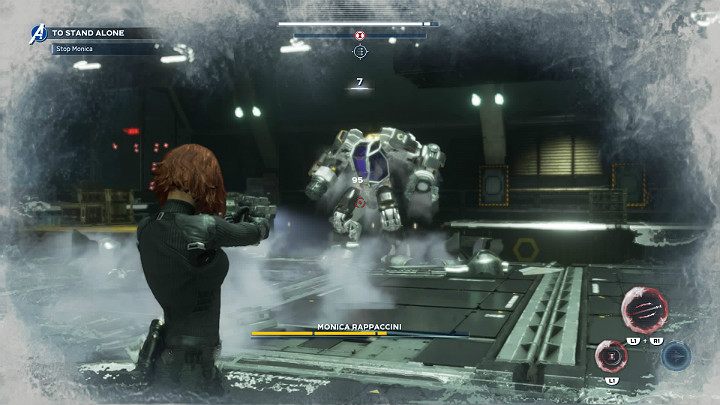 During the second phase, also try to avoid melee combat and attack your opponent by using ranged weapons. If you engage in melee combat, perform a few quick punches and move away to a safe distance.

At the beginning of the third phase of the boss fight, Monica will disappear once again. Proto-Synthoids and Adaptoids will appear in the room. Eliminate them to move on to the next stage of the boss with.

At this stage of the duel, the Adaptoids are able to absorb all of Black Widow's power. In other words, they will deprive her of the ability to use her heroic skills. This type of attack can occur when the Adaptoid gets closer the Black Widow - dodge his incoming strikes. 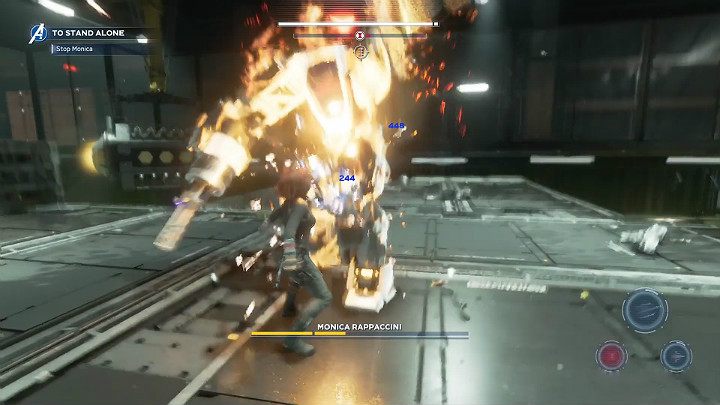 Monica will return to the battlefield even stronger than before because she will have some fiery skills. If you start the fight with melee combat, Monica will try to use her AoE abilities in order to inflict heavy damage. When a red marker appears above her head and she raises her left hand up it is a sign that she will hit the ground and cause an explosion. 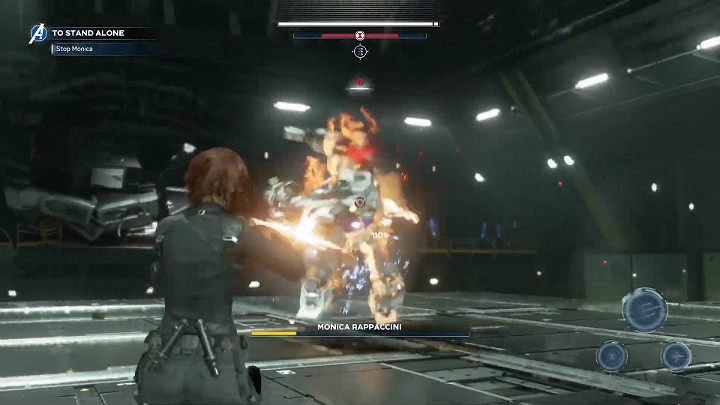 When the mech covers its chest with its arm and a red marker appears above its head, Monica will perform a charge. This ability will leave behind a trail of fire, which can further inflict more damage. You have to perform a dodge at this point, because this attack takes as much as 75% of your heroine's health. 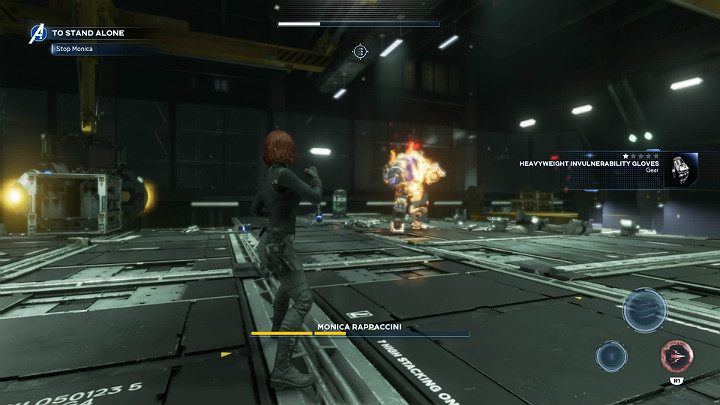 In the final phase of the boss fight, Monica doesn't have the high-speed machine gun, but a grenade launcher. If she pulls her right hand forward, then she will start firing grenades which cause area of effect damage. The bombs fly slowly and their landing site will be marked with a red circle. That means you'll have enough time to avoid being hit. 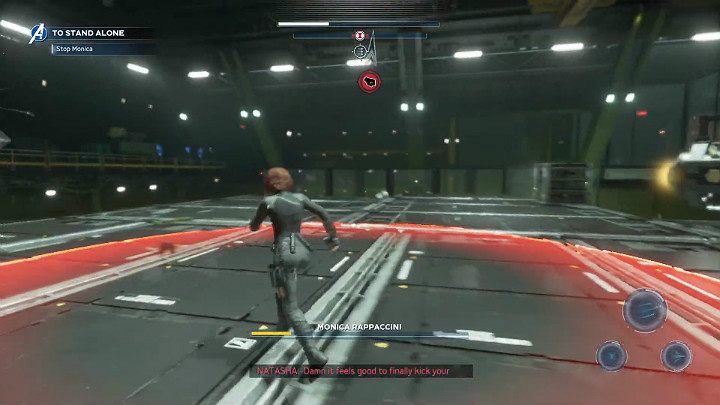 When Monica's health is low, she will try to surprise you with a powerful jump attack. There will be a large red circle on the ground so make sure you don't stand in the affected area. 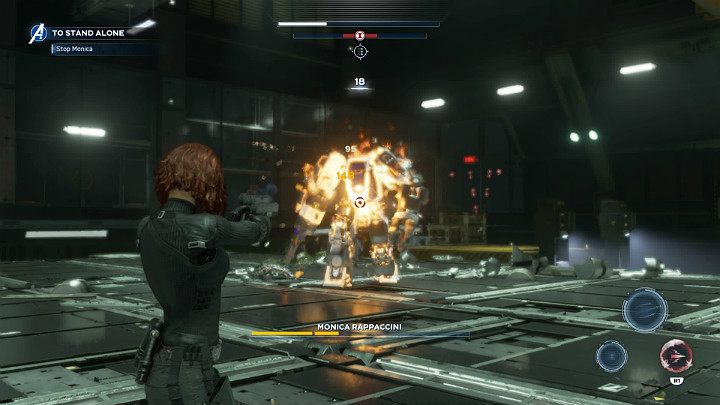 Monica will try to inflict damage with slow but extremely powerful melee attacks, so try to keep her at distance and attack her with ranged attacks until you finally kill her. 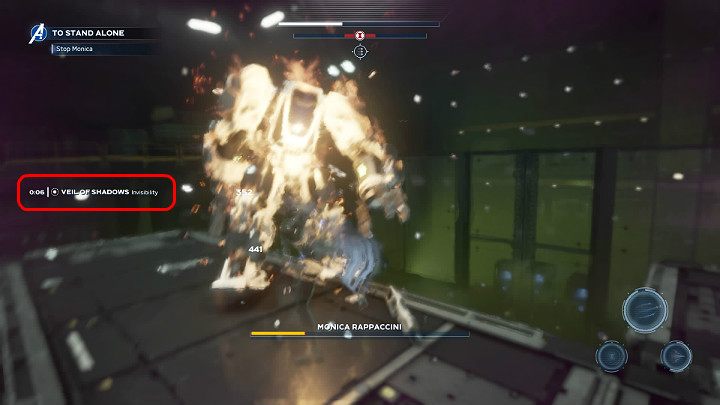 If the Veil of Shadows ability becomes available, then you will be able to strike your enemy without any limits for a few seconds. Activate the ability as close to the boss as possible so that you don't waste time getting to her and use heavy attacks that cause more damage.