On this page of our game guide to Marvel's Avengers, you can find a detailed description of the 12th campaign mission. During this mission you will return to the Utah Badlands as Kamala Khan. However, you will be accompanied by the Hulk and Iron Man.

During the Breakout mission, you will also have an opportunity to complete optional side objectives for which you can get additional resources and equipment. When the Tactical Awareness gets activated, all secondary objectives will be marked with question marks on the UI. We briefly explained the types and objectives of side missions, as well as what can be obtained from them. Also, we have described in detail the main objective of the mission.

The resistance discovered an AIM facility in Wyoming which conducts experiments on Inhumans. Dr. Pym wants the Avengers to break into the facility and find evidence of crimes committed by AIM. 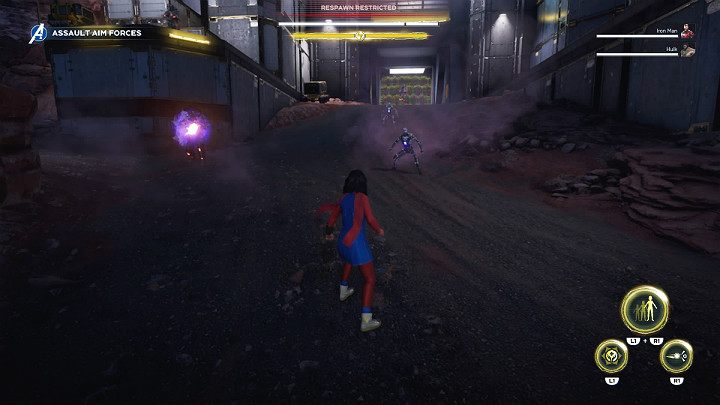 As soon as you get near the square, the enemy will activate the alarm procedures. After that, many enemy units will spawn in front of the entrance to the building. You will encounter a new enemy unit among enemy forces, that is, the Elite Peacekeeper, which has a long-range weapon with explosive missiles. After defeating all opponents, you can enter the building.

Another objective of this mission consists in locating and destroying two transformers. When you enter the building, pay attention to the yellow button above the elevator. After you press it, the transformer markers will appear on the balconies on both sides of the room. 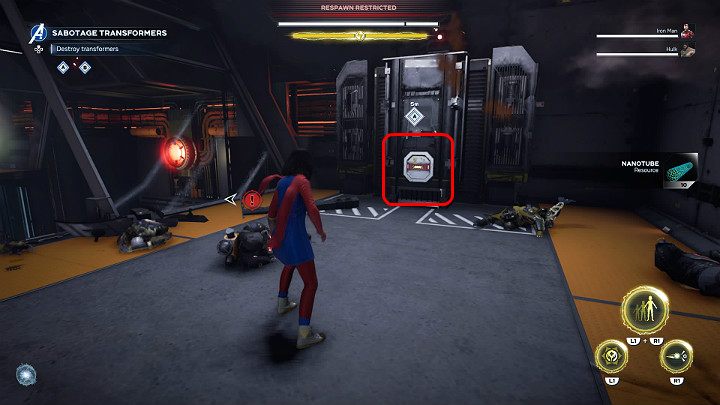 Access to them will be defended by an AIM squad. First, get rid of your enemies and only then take care of the transformers. First, you have to slide out the transformer's core. After that you can destroy it. Attacking the machine without revealing the core won't cause any damage. After completing this task, the elevator door will open. Kamala and her team of Avengers will be able to descend to the lower level of the building.

After you reach the lower level you will have an opportunity to get some extra resources and equipment. However, before you start opening closed rooms and areas, you should eliminate all opponents. 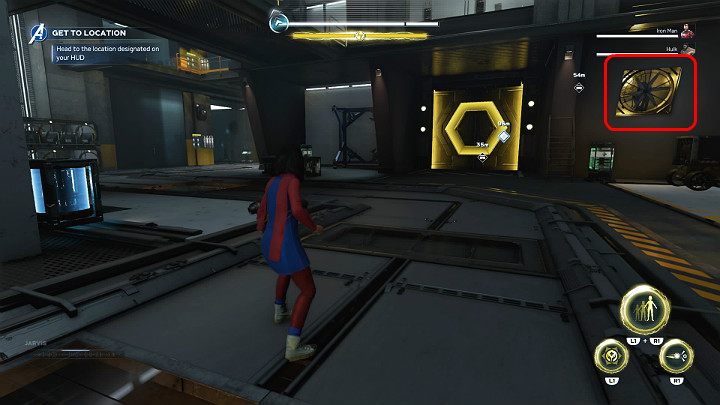 To get into a locked room you will need to find 4 buttons and then activate all of them at the right time. If it takes you too long to activate them all in the specified time limit, then you'll have to try activate them again. In a locked room, you'll find a golden chest. In the chest you will find resources and a rare item of higher quality. On the left side of this room there is also a chest with special resources.

Depending on what version of the lock will be loaded in your mission, you either have to manually press the 4 buttons or use ranged attacks to break through the ventilation grates and activate the buttons (as you can see on the screenshot above). Turn on your tactical awareness ability to check what kind of lock you're dealing with. 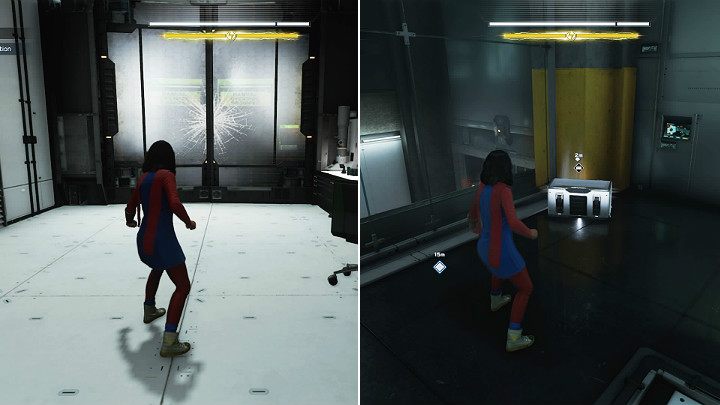 Upstairs, behind a cracked door, you'll find a large office that contains a few containers with resources and a silver chest with equipment. Once you have collected all the items, you can go to the main mission marker and move on to the next stage. 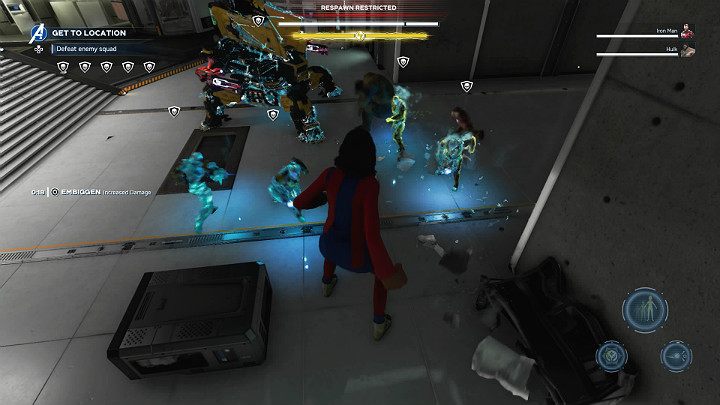 As soon as you get to the lab, you will be attacked by elite AIM squad. The main opponent of this group will be the well-known Dreadbot. He will be accompanied by a few Synthoids. First of all, focus on smaller opponents. Then, finish off the bigger ones. The best way to quickly win this battle is to use the Polymorph ability - then just a few punches should be enough to wipe out all enemies. Enter the elevator and reach the next stage of the mission.

While fighting the elite AIM squad, the enemy forces have prepared to evacuate and began to activate the launch procedures of an automated dropship in order to secure their results of experiments conducted on Inhumans. Your objective is to stop the AIM forces long enough so that Jarvis can change the flight destination of the dropship. 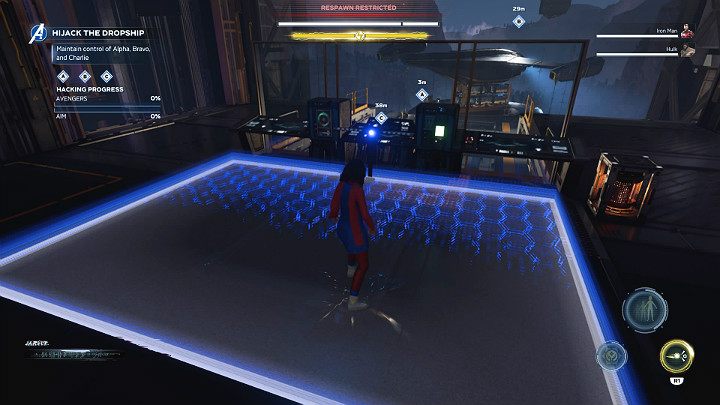 After entering the higher level, you will have to maintain control of the 3 terminals - Alpha, Bravo and Charlie, marked with the letters A, B and C. Once you are in the marked area, the terminal will be intercepted after a few seconds. Therefore, you will be able to proceed to the next destination. 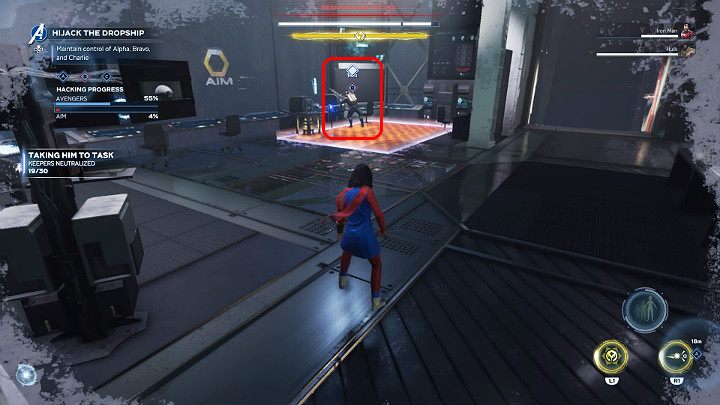 After taking over the first terminal, Jarvis will immediately start hacking AIM systems. However, you'll need to capture all three points in order to make fast progress. However, the enemy forces will try to thwart your efforts. They will try to recapture the terminal from time to time. In such case, you will have to run to the vulnerable location and deal with the Synthoid which attempts to capture a specific point. Once the hack progress bar reaches 100% the mission will be successful. Jarvis will redirect the dropship to The Ant Hill. You'll be able to move on to the next stage of the campaign.

Go to The Ant Hill, where you will have to talk to Dr. Maddy Cho in order to receive a rewards for your contributions (a lot of valuable resources). Also, go to the training grounds and talk to Dante. At night, sneaks out of The Ant Hill to begin the next campaign mission - To stand alone.