On this page of our game guide to Marvel's Avengers, you can find a detailed description of the eighth campaign mission. During this mission you will have an opportunity to explore the Golden Acres mansion of Tony Stark, find some additional equipment and fight with new types of opponents.

Kamala Khan and Bruce travel to Tony Stark's last known whereabouts, his family estate in the Utah Badlands, that is, Golden Acres. 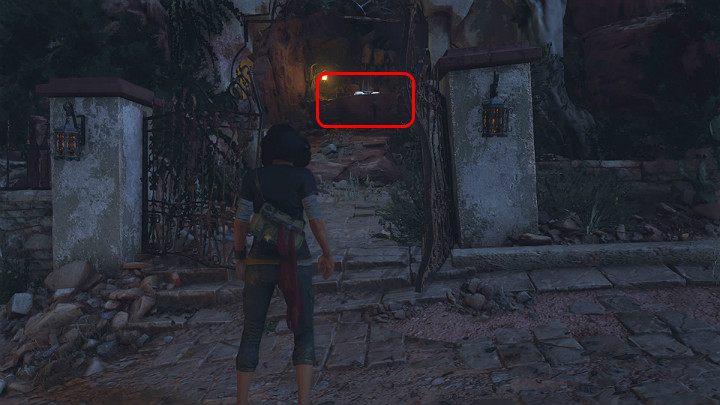 But before you head to your destination, enter the first alley on your left and jump onto a small rocky ledge and you'll find a well-hidden chest. 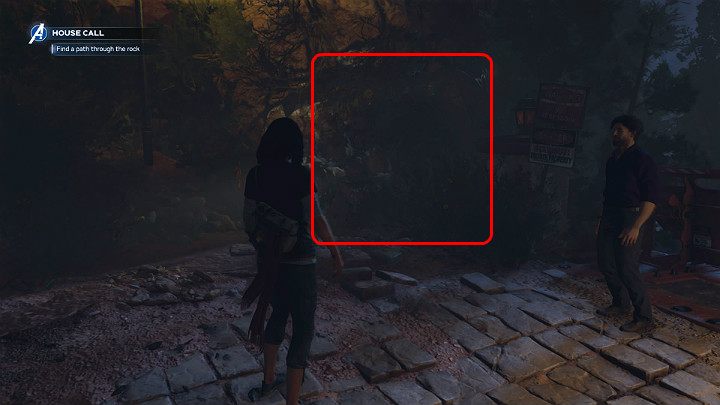 Walk straight ahead until you reach the raised drawbridge. You will have to look for an alternative way to get to the property. On the left side, you'll notice a cracked wall. Destroy it with a reinforced heavy attack to advance to the rest of the location. 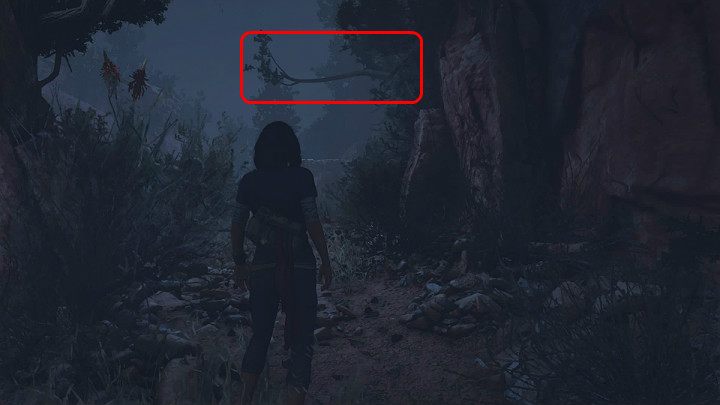 Jump over the first chasm. Then, run towards the edge of the cliff and make a jump to grab a branch and fly over to the other side of the chasm. 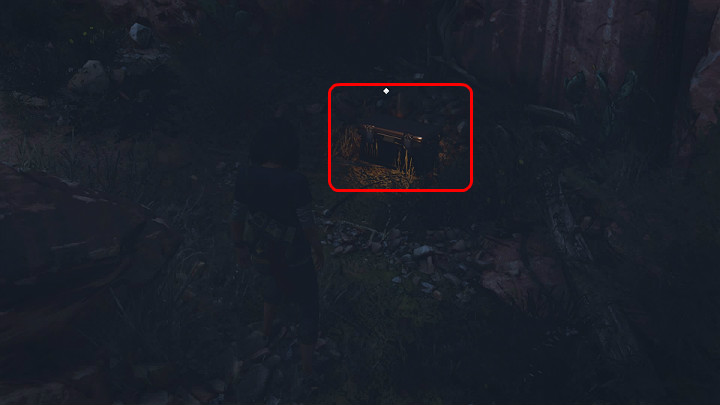 On the right side, under the rock, just right at the corner, you'll find one chest with equipment. It's easy to overlook it in the dark. Keep moving forward and overcome more obstacles. When a narrow rock ledge will collapse under Kamala's feet you will begin to slide down a steep slope right into the abyss. At the right moment you have to jump out to grab one of the branches protruding from the rock and then jump to safety. 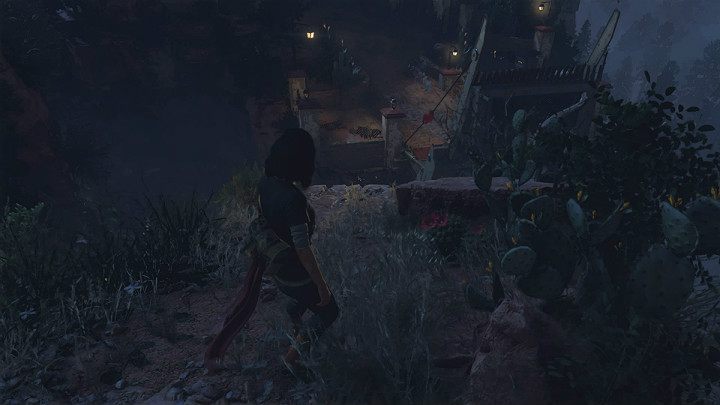 From this height you will be able to spot the Golden Acres estate. Run forward and jump to the other side. 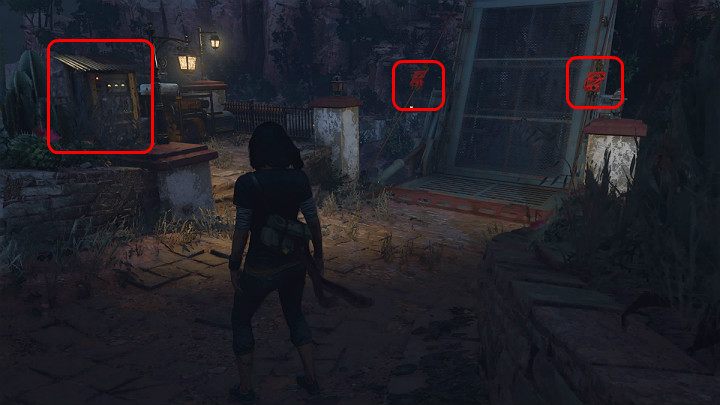 In order to lower the drawbridge, you will have to break the hooks supporting it in vertical position. After that move the lever on the control panel located on the left side. Aim at the red joints on the ropes and hit them with ranged attacks. The bridge will be lowered. Thus, Bruce will be able to join you. Walk further ahead and open the main gate of Tony Stark's mansion to enter the courtyard. 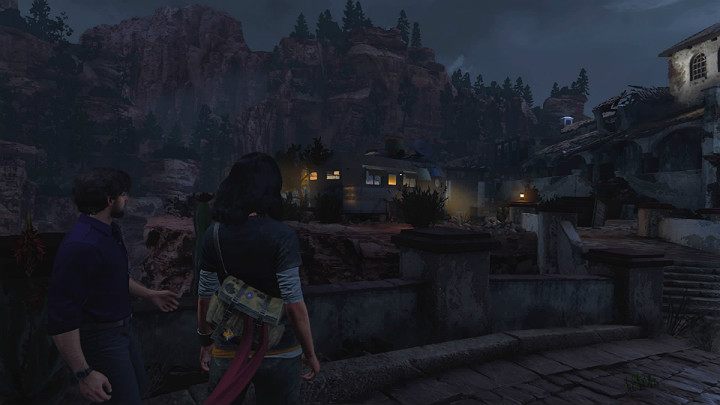 As it turns out, the mansion was ruined and the famous Tony Stark has moved to a camping trailer. After a longer cutscene you will complete this phase of mission.

Now you're playing as Tony Stark. Your main objective consists in collecting all parts of the primitive version of Iron Man's armor. Individual parts have been scattered all over the ruined property so you'll have to look for them.

The first piece of Tony Stark's armor you have to find are the repulsor gloves. After walking through the tilted door leading to the building, turn left. 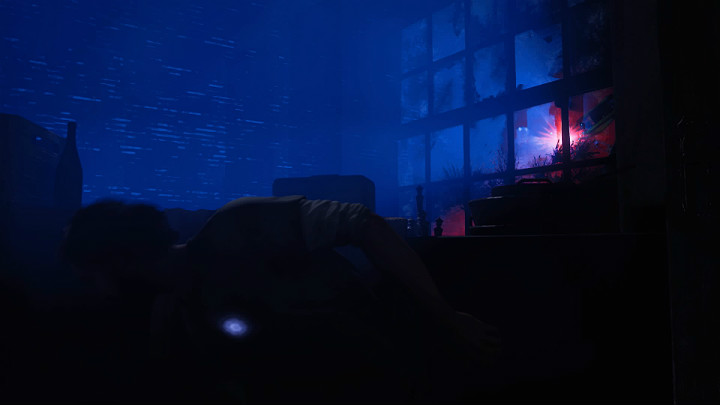 As soon as you set foot in the living room, you'll notice through the window that the exterior area is being patrolled by AIM robots. You'll have to wait until the blue light of the scanner disappears to move on. 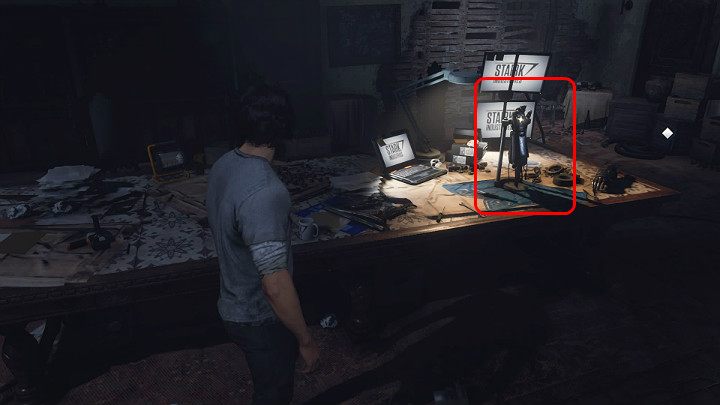 Repulsor gloves can be found at the end of a large table on the right. After you interact with the item, Tony Stark will immediately wear them. 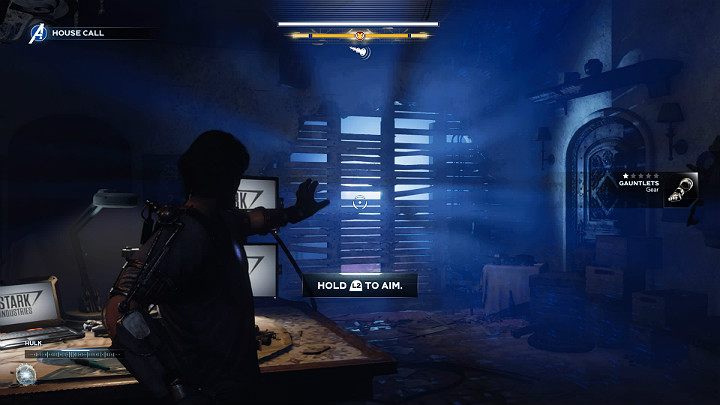 At this point, you'll have to complete a short tutorial which explains how to use this weapon. Look ahead, aim at the destroyed wall, which is now covered only by pieces of wood. Shoot the drone that appears there. Now you can walk through the hole you've made with repulsor gauntlets.

After you squeeze through the hole in the wall, turn left first and smash the next wall. 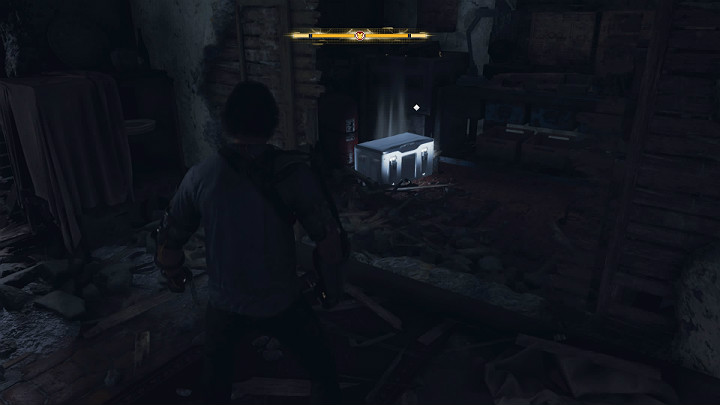 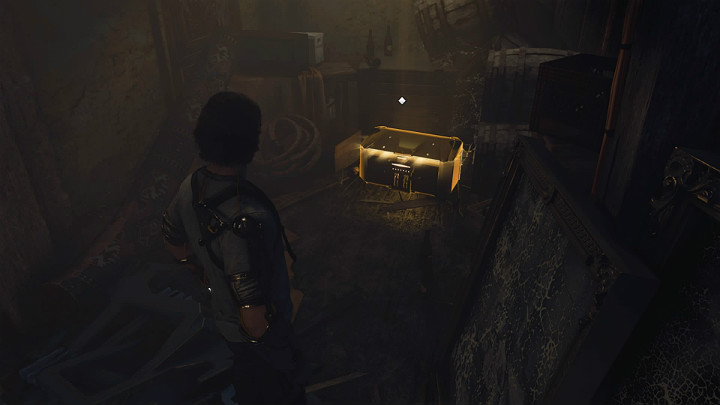 Turn to the left and smash another wall made of wooden boards. In a small room you will find a hidden golden chest and some resources. 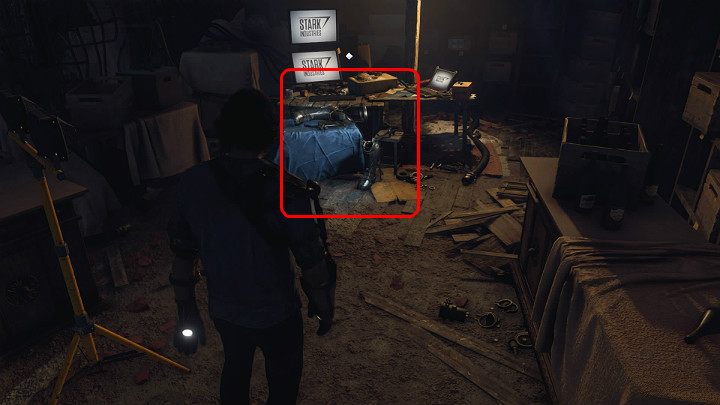 Go back to the earlier room and walk forward, that is, towards the desk with the computers. There, you will be able to find the repulsor boots.

After you've collected your repulsor boots, you'll have to complete another short tutorial. It will teach you how to levitate in the air and fall to the ground. 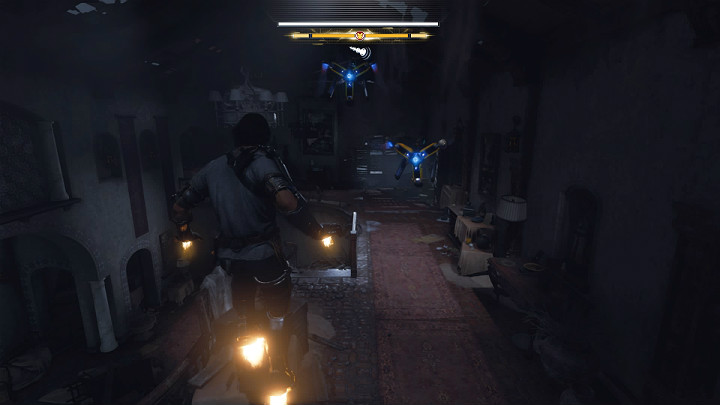 There will be AIM some drones in the room above your head. Levitate and fly up in order to defeat your enemies with repulsor gloves. 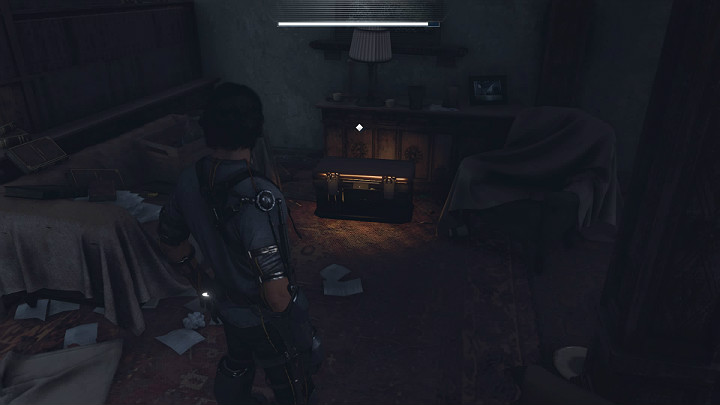 Turn towards the balcony and land behind the railing of the stairs. You'll find a chest in the dark corner. 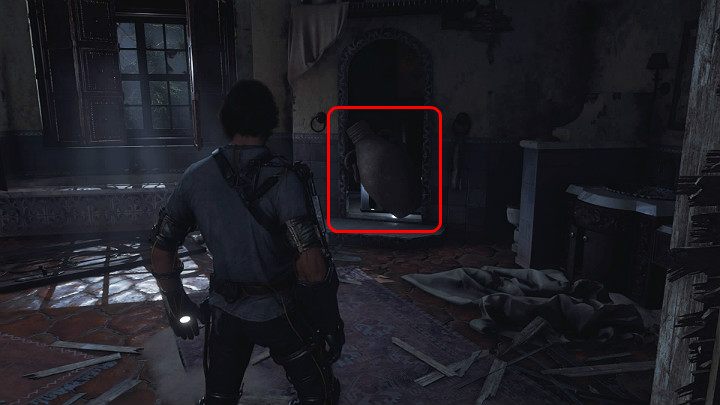 Destroy the wall on the opposite side of the room and move on to the rest of the property. Shoot the vase on the right to reveal a silver chest hidden in the fireplace. Keep going left. 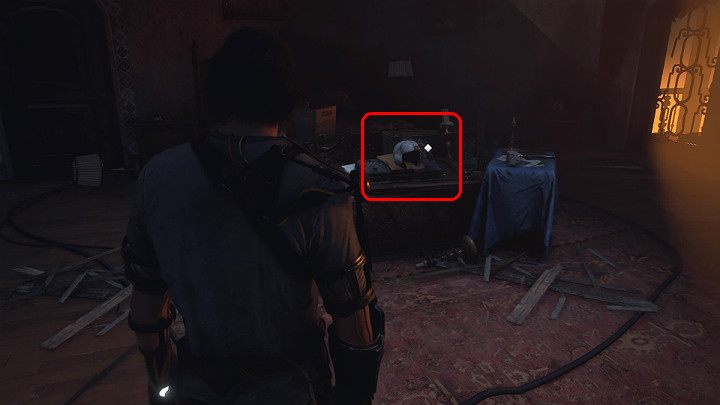 The helmet can be found in a ruined bedroom. It's lying on a chest located just by the bed. Tony Stark's armor has just been completed and now you can move on to the next stage of this task.

As soon as you can complete the armor, an AIM jet piloted by Tarleton will appear in front of Stark's mansion. The villain didn't come in for a friendly visit so you'll have to fight him. 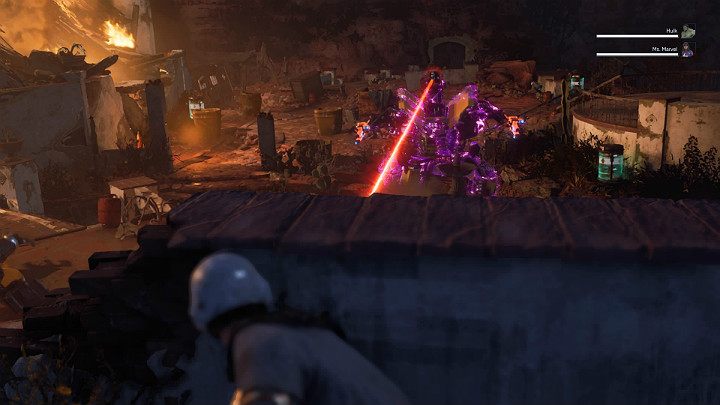 The first serious opponent which has to be defeat is the Dreadbot. It is a large-sized combat robot that has many types of ranged weapons at its disposal, as well as flamethrowers for close-combat. The latter are being activated if you get too close to the opponent. Any hit received from this opponent can heavily injure Tony Stark, so you'll have to be smart and very careful during this battle. Dreadbot lasers cannot penetrate the walls so you can take cover behind obstacles during combat in order to save some health. 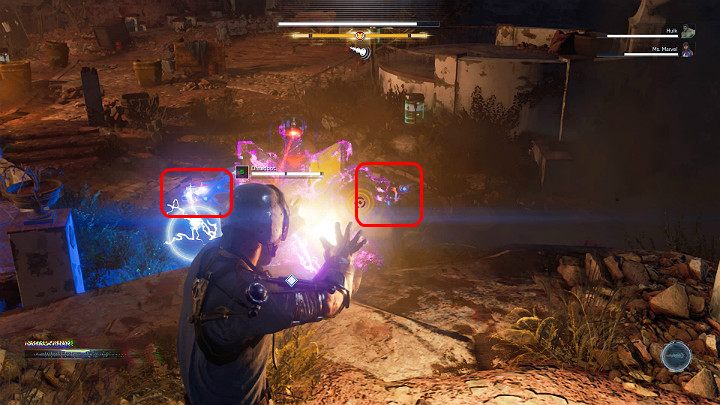 First of all, focus on destroying the two side turrets of the enemy, which have been marked in the picture above. This will weaken his firepower and make it easier to defeat him.

Once the turrets have been destroyed, you can fly in the air and take advantage of Tony Stark's high mobility. Levitate in the air and fly over your opponent. Attack him at the right moments, that is, when your enemy is vulnerable or has focused on attacking your companions. 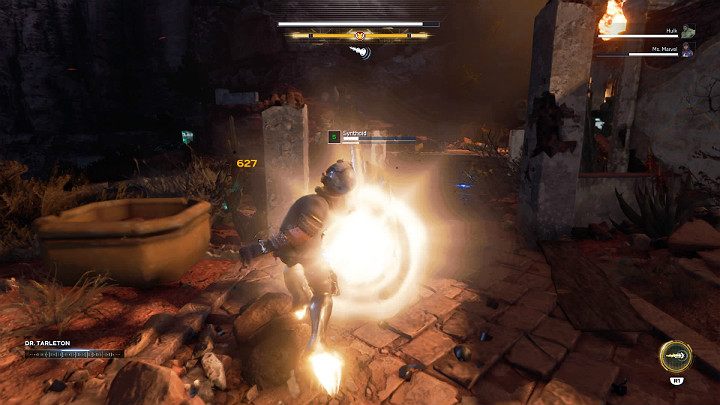 After killing the Dreadbot, it is time to fight a large squad of AIM soldiers. Enemy forces will include drones, flying soldiers with ranged weapons, as well as ground units. 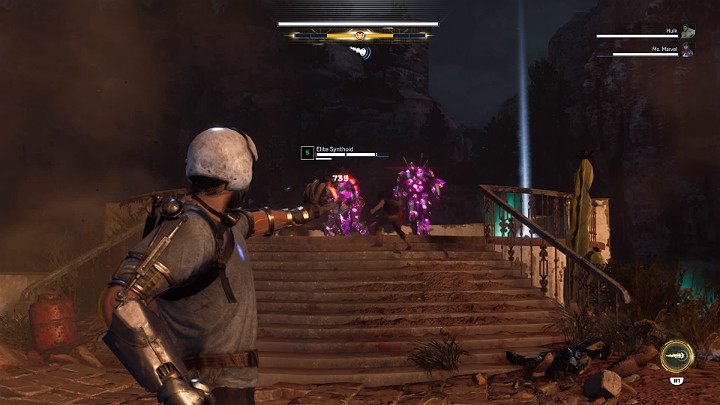 In the penultimate wave of enemies, stronger Syntoid units with lasers will appear. You've already had an opportunity to fight them during the Missing Links mission. Laser attacks are cannot be blocked, so you have to avoid them. 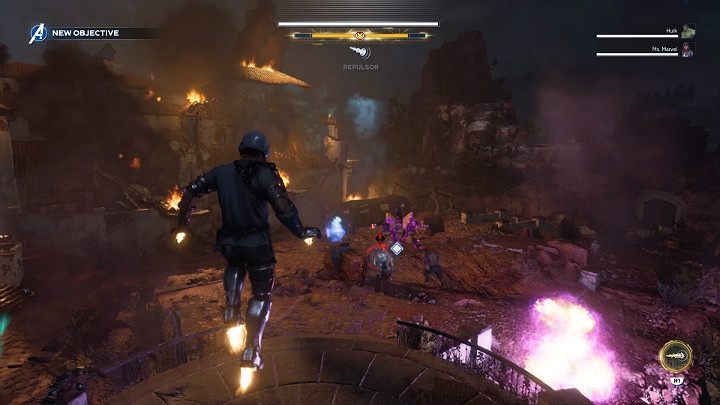 After defeating these enemies, Tarleton will send an elite AIM squad with two Cryo Synthoids and one Dreadbot to the battle. It is best to keep your opponents at a distance and shoot them with repulsor gloves or perform quick attacks in a short series and jump away to escape the range of their weapons. When your hero's willpower will drop to a dangerous level, smash one of the green containers to restore the missing health.

After completing the House Call mission and returning to the Chimera, Tony Stark will order Jarvis to decode the short video message which he received from Kamala. Also, he will start to repair the ship. During this short episode, you will gain access to previously inaccessible sectors of the ship and have a chance to talk to your companions. Use this opportunity to check every corner of the ship in order to find many chests with valuable loot or resources. Once you have carried out the necessary repairs you will be able to move on to the next mission - Armor chase.