On this page of our game guide to Marvel's Avengers you can find a detailed description of the second mission of the main campaign. During this task you will have an opportunity to learn the basics of combat and use the heroic abilities of superheroes for the first time. In the final part of this mission, you will have to confront the first boss, that is, the Taskmaster.

Assist the police in their standoff

Unfortunately, the main part of the Avengers Celebration Day will be interrupted by a large explosion on the Golden Gate Bridge. During this mission, you will play as five Avengers: Thor, Iron Man, The Hulk, Captain America and the Black Widow. 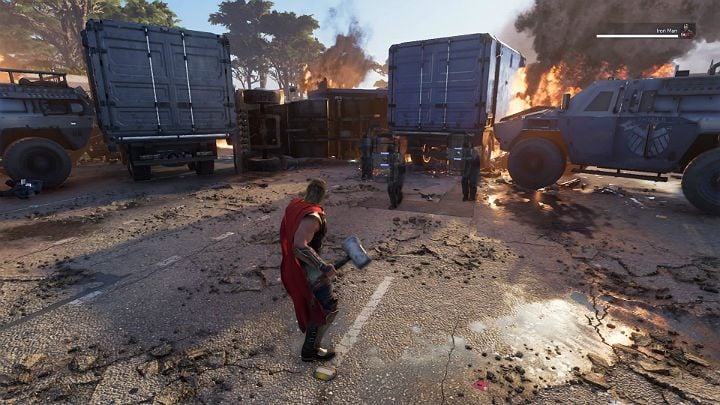 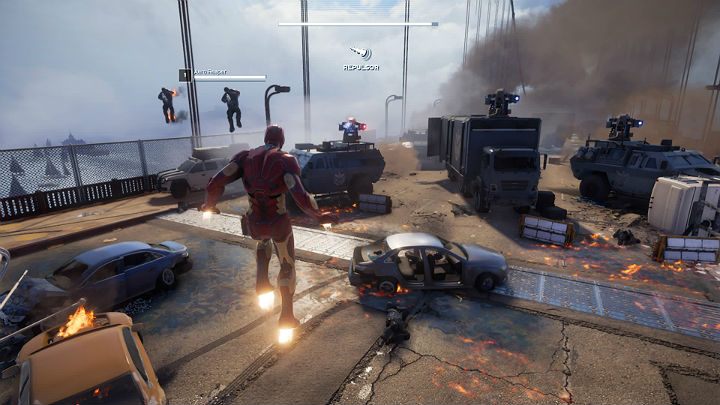 As Iron Man, you will have to complete a short flying guide and learn how to shoot moving targets. As you fly to the next part of this location you will have a few targets in front of you that have to be shot down. However, even if you miss a few opponents it won't make any difference. After you land, you have to be more careful and focus on the battle. You will be surrounded by a few opponents on the ground and by a few airborne enemies. You'll also have to deal with a few pulse turrets. 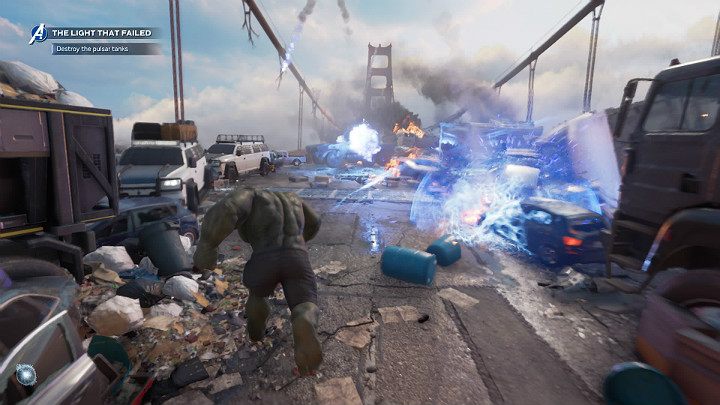 When the situation on the Golden Gate Bridge gets even more complicated and the opponent brings out some heavy guns, The Hulk will jump right into the action. By controlling this hero you will learn how to use his basic abilities, how to attach to walls, and how to use the Heroic Ultimate ability. 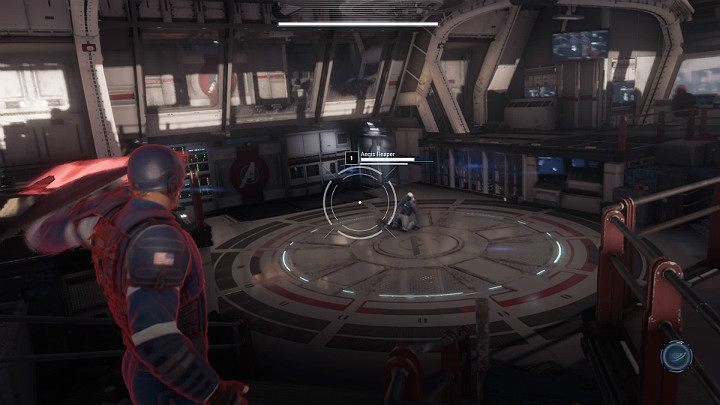 Moments later, you will be transferred aboard the Chimera. There, you will play as Captain America. During this short stage you will learn how to correctly perform blocks, perform finishing moves, and learn the second way of defeating opponents equipped with shields.

In the final stage of this task, you will become the Black Widow and have to confront the first boss - Taskmaster. You have to prevent him from detonating the Sonic Bomb. During this duel, you will have to use several essential mechanics, like dodges and counters, to deal with this supervillain.

Taskmaster - first phase of the fight

When the fight starts, run forward, jump off the bridge, catch the Taskmaster in the air and focus on performing the quick time event - press the right buttons at the right time. 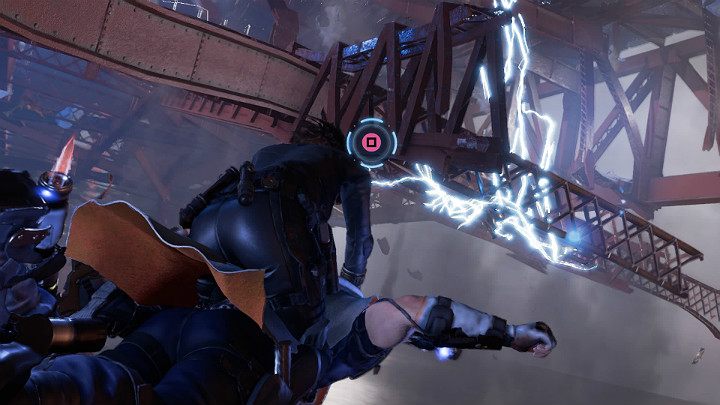 Taskmaster - second phase of the fight

After a short flight, the battle moves to one of the narrow platforms of the bridge. Your task is to perform sideways dodges and fire at your opponent right away in order to cause him some damage. You don't have much time to dodge - when the opponent is close to the Black Widow, time will slow down a bit. While dodging, hold the button responsible for aiming and immediately shoot the Taskmaster's at his back. Attacks from the front will be blocked by a shield. 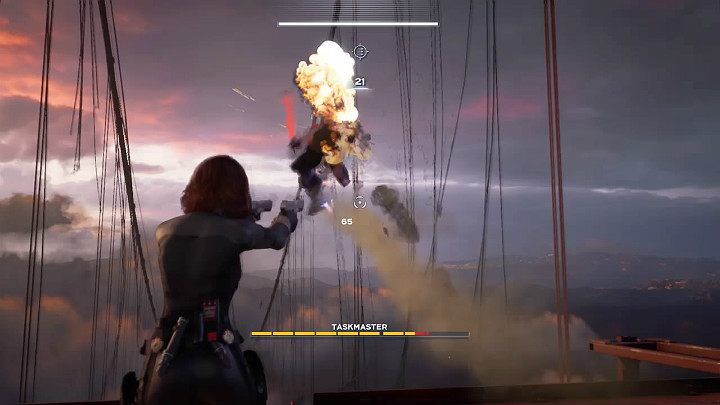 Taskmaster - third phase of the fight

After several accurate shots, Taskmaster's jet pack will get destroyed. The fight moves to the roads. During this phase, focus primarily on dodging (just before you get hit) to perform a counter. Combine light and heavy attacks to make combinations that are difficult to block. Don't attack the boss for too long, he will eventually counter your attack. 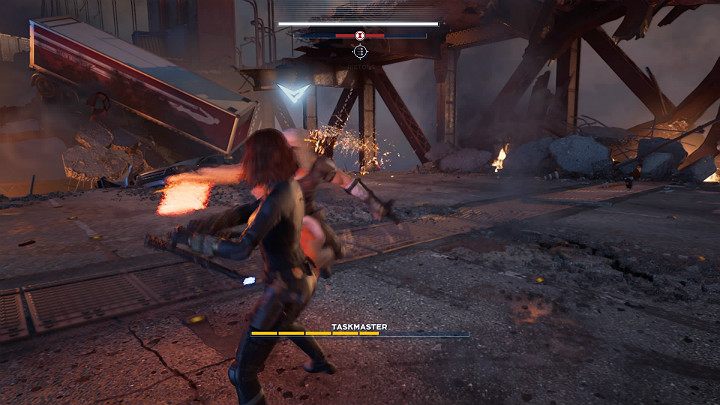 Taskmaster - fourth phase of the fight

In this phase, you have to use grapple hook to counter the opponent's ability and avoid receiving damage from bombs. Wait until your opponent starts the skill animation (he spins around) and press the counter button (R2 on PS4). Keep doing this until you reach the final phase of the fight. 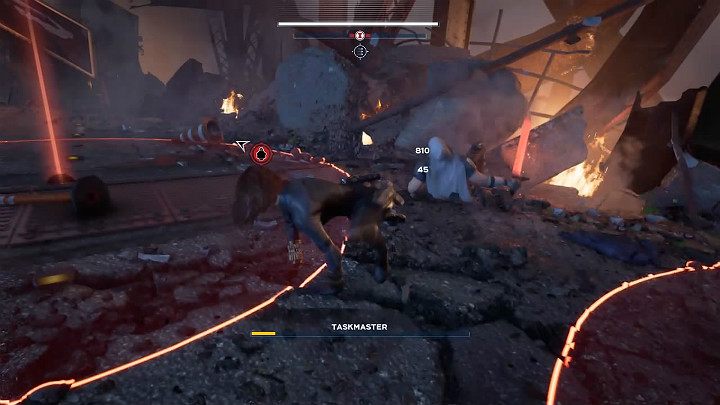 Try to use the grapple when the opponent is near the red circles. It is possible that after a successful counterattack, Taskmaster will get in the range of his bombs and receive additional damage. 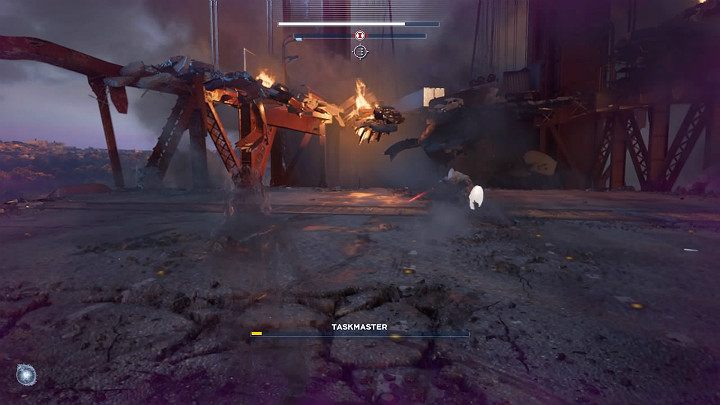 In the final stage of the duel, you will have to use the Veil Of Shadows Heroic Ability to disappear from your opponent's field of view. Perform several attacks and use a finisher on Taskmaster when the information appears on the screen.