On this page of Marvel's Avengers guide, you will find a detailed description of the first campaign mission. During this task you will have an opportunity to get to know all superheroes, learn the basics of controls and find out how to use the Tactical Awareness ability.

Check in at the Avenger's Day front desk

Your adventure with Marvel's Avengers begins in San Francisco near the famous Golden Gate Bridge, where Avengers Day celebrations are currently underway. When you get off the plane, walk ahead and you'll reach reception. After a quick hello, you will get your first assignment. 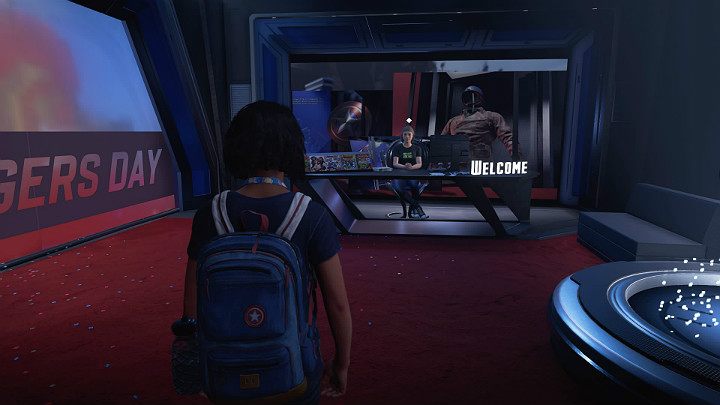 Your first task is to gather all five comics so you can get on the VIP balcony and watch the main part of the event. Comics are awarded for performing various tasks at certain booths. Each task is related to a different Avenger and shouldn't cause you any problems. To make it easier for yourself to find the right stands, use your tactical sense.

When you walk into the area dedicated to Avengers Day celebrations, you'll notice a shooting range on the right. There you can get your first comic book. Your job is to shoot the bandits using Black Widow's special weapon. Aim for red targets, and avoid the green ones that symbolize the hostages. Score 160 points to get the first comic book. 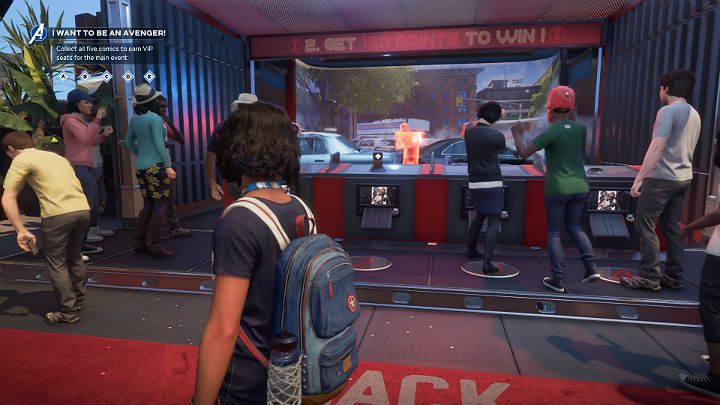 To the left of the shooting range, you'll notice the entrance to the Retro Arcade. Go inside and find Hulk Smash game. Wear gamma gloves and hit the marked point with as much force as possible (press the buttons that appear on the screen). After a successful attempt, the second comic will be yours. 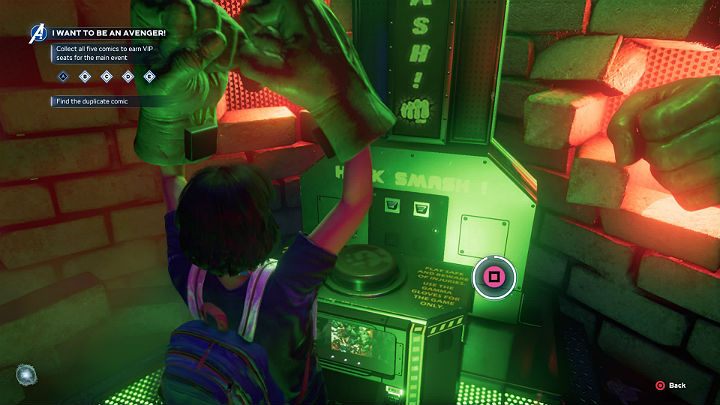 Behind the scenes - third comic book 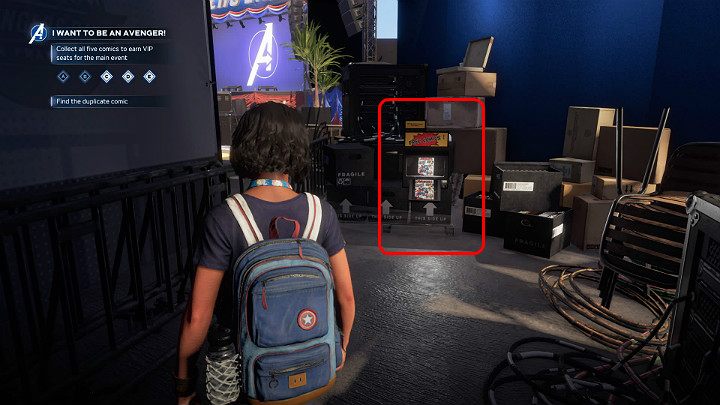 When you go behind the scenes, head back to Tony Stark's room - on the left, you'll notice a large tent. You'll find a game in which you can try to lift Thor's hammer (press the buttons that appear on the screen). You'll get another comic for taking on this challenge. 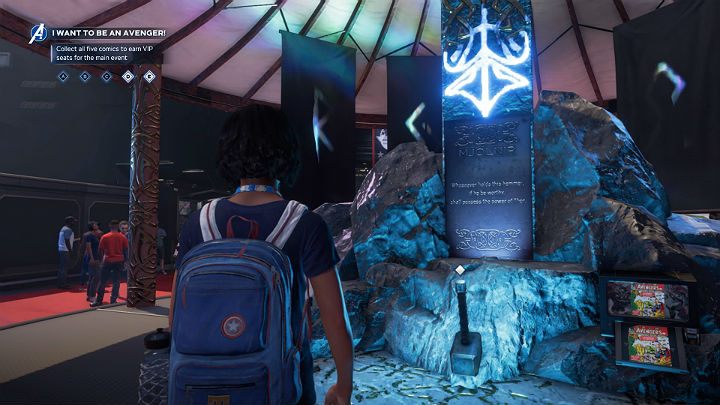 When you walk into the Captain America's booth, you'll find that all the comics you could get here are already gone. After a short cut-scene, you will receive one comic from the Avenger himself - unfortunately it will be a duplicate. 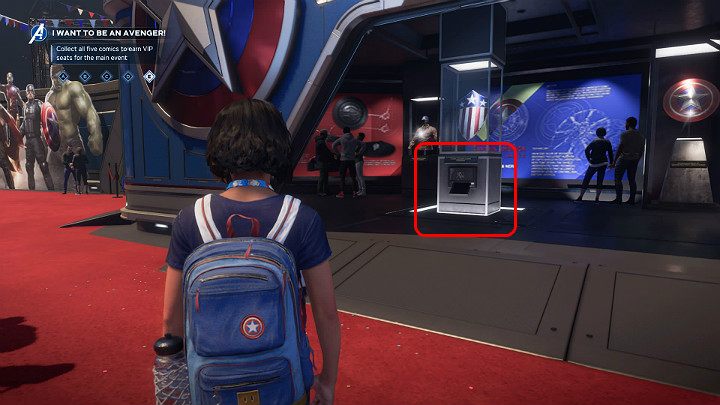 Take it and go back to Tony Stark's room. There is a boy right in front of the entrance who will be happy to trade comics with you. That way you will get all five issues and be able to access the VIP balcony. 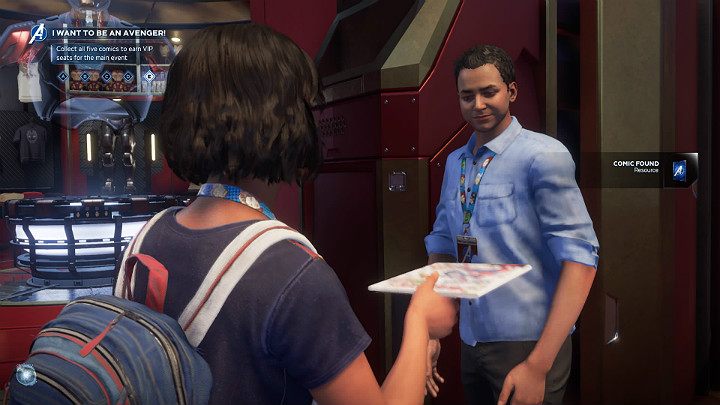 Meet Abu at the VIP entrance

After getting all five comics, you can head to the VIP balcony. Activate the tactical sense and head in the right direction. 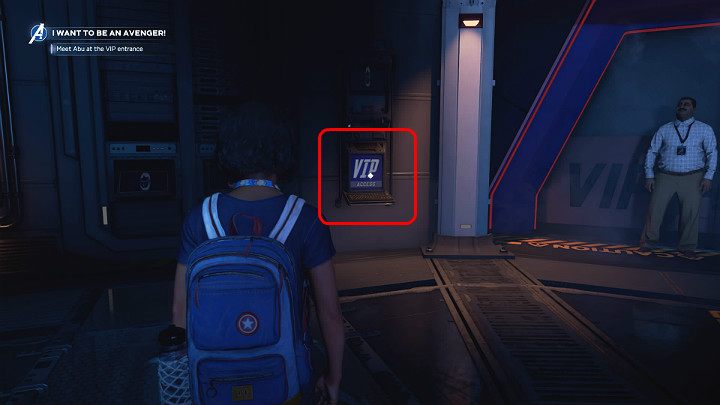 On the right, you'll notice Abu waiting for you, and on the left, the console where you have to scan Kamala's phone to open the elevator door. Do this and enter the elevator. 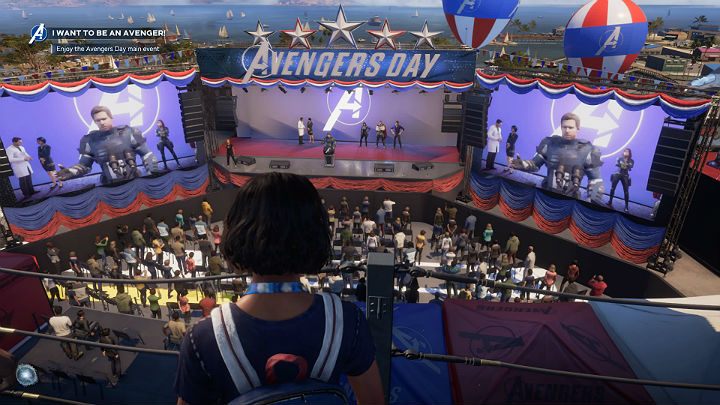 After a short while, you'll reach the VIP balcony from where you'll be able to watch the main part of the Avengers Day show.