In this chapter of Marvel's Avengers guide, you will learn what item attributes and perks are.

The value of items found in Marvel's Avengers can be determined not only by their tier, but also by their attributes and perks (both their quantity and quality). Attributes increase the specific statistics of your character, and perks provide additional options. With so much complexity, you can even adjust the character's playstyle to your preferences.

Gear attributes - what are they?

Each character in Marvel's Avengers has access to unique equipment assigned to his or her class. For example, Black Widow will have combat and tactical equipment, and Ms. Marvel has jewelry (wristbands, bracelets) and Insignia. Regardless of which character you play, the equipment you find will have a certain value of a given attribute: Might, Precision, Proficiency, Valor, Resolve, Resilience and Intensity. 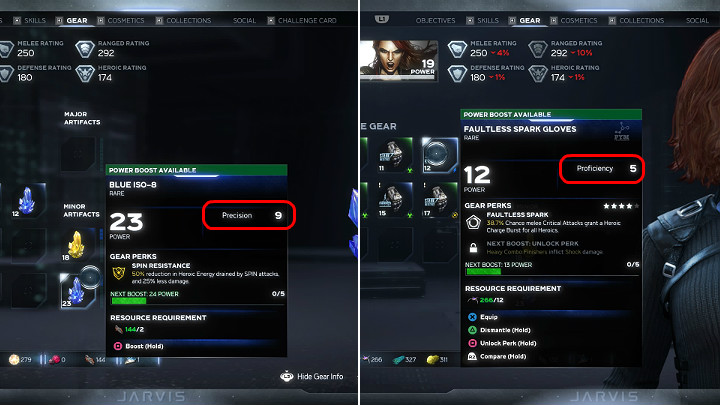 The value of an item's attribute can be checked in the top right corner. All of the above attributes affect your character's offensive and defensive capabilities. For more information on attributes, see the separate chapter of this guide devoted entirely to Hero development - Attributes and combat ratings.

You can increase attributes of items by reinforcing them. As the Power level of the object increases, the value of its attributes will also increase slightly - usually from 1 to 2 points, depending on the item's rarity.

Gear perks - what are they, how to unlock?

In addition to attributes, items found in Marvel's Avengers may also have perks unique to a particular character. Item perks affect your character's additional fighting or defensive capabilities by adding various bonuses, e.g. attacks on weak spots have a chance to charge up the Heroic Moves, heavy attacks will cause more damage, add a chance that critical attacks will cause an explosion inflicting stun damage, and the chance that strengthened ranged attacks will grant a defense bonus. There are any possibilities - you will definitely find something suitable for you. 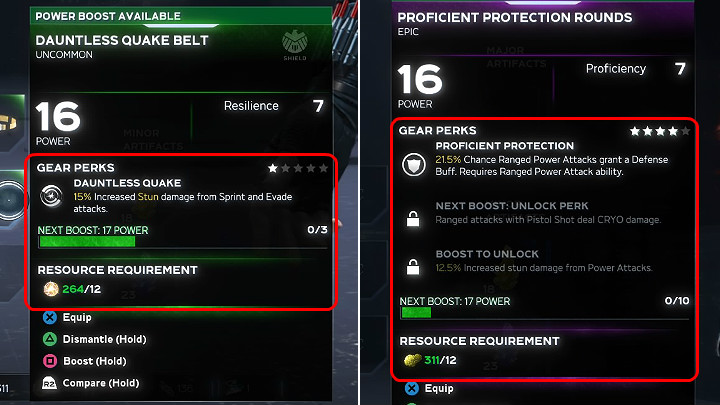 The quality of a perk depends on the quality of the object. An Epic item with a perk that increases the chance of stun will have a higher value than the same perk for an Uncommon item. Depending on the item's rarity, your gear may have the following number of perks: 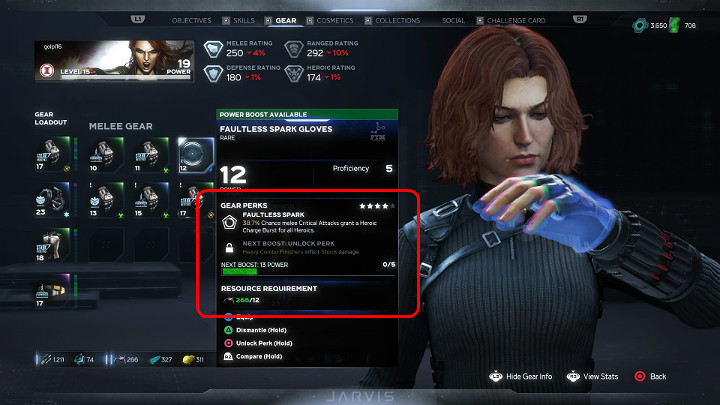 You will need specific resources such as Nanite, Catalyst or Plasma to unlock additional perks offered by higher rarity items. Select an item in your character's inventory and hold the corresponding button (Square on PS4) to unlock an additional perk.