On this page of our game guide to Marvel's Avengers you can find a set of starting tips for beginners. Reading these hints and tricks should help you in starting your adventure with the game. Also, this will give you an overview of some key game mechanics. Some features of the game that were mentioned in this section have been discussed in more detail on separate pages of our game guide.

Tactical Awareness is a special skill of the Avengers that displays on your HUD all of the most important locations that should be explored. After activating the Tactical Awareness (by default the Up arrow button on the PS4 D-pad) in addition to the main mission objective, which is marked with the white diamond icon on the screen, the current position of your allies will be marked, as well as additional points of interest. The latter are marked with the diamond icon with a question mark in the middle. Also, Tactical Awareness indicates the shortest path to the mission's main objective - if you get lost, just follow a white streak of light. 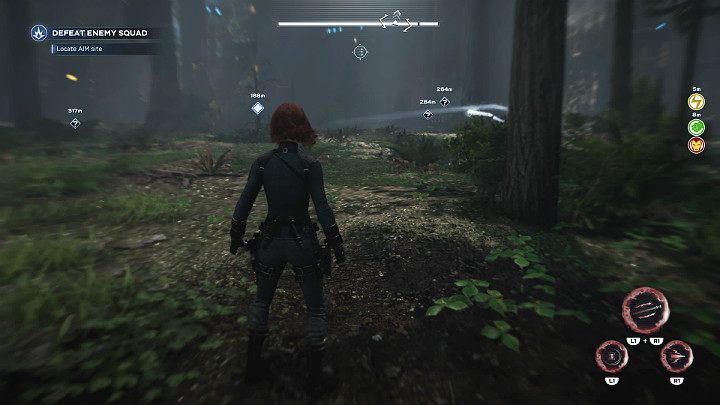 There are several ways to restore your superhero's health in Marvel's Avengers. 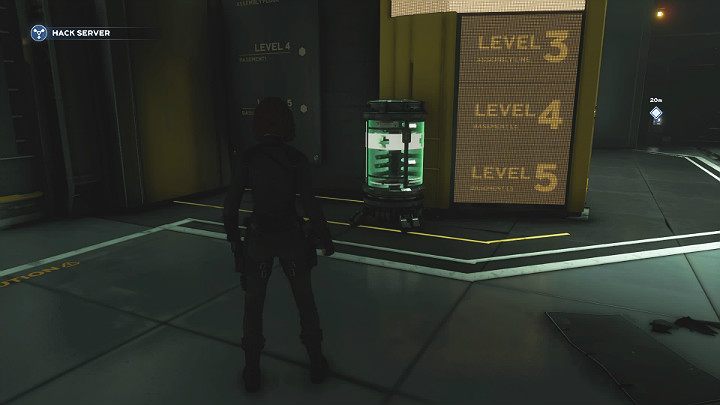 Performing dodges (by default the Circle button on PS4) or counter (by default the R2 button on PS4 gaming controller) is the main way of getting injured in Marvel's Avengers. Performing an effective dodge just before receiving a punch activates a slow-down of time during which you gain a moment to launch your own attack. Performing a successful counter (just before receiving a blow) allows you to launch an immediate attack against your opponent. It is worth taking some time to learn defensive techniques, for example, in the HARM training mode. This will help you during gameplay on higher levels of difficulty.

How to spot a threat

In the heat of battle, you may not notice an incoming punch or a bullet fired at your heroes' back. Carefully observe the HUD and you'll notice exclamation marks (red and yellow) on it. These exclamation marks inform you from which side and exactly when the impact will occur. You will usually have enough time to dodge, jump or take cover behind some sort of obstacle. 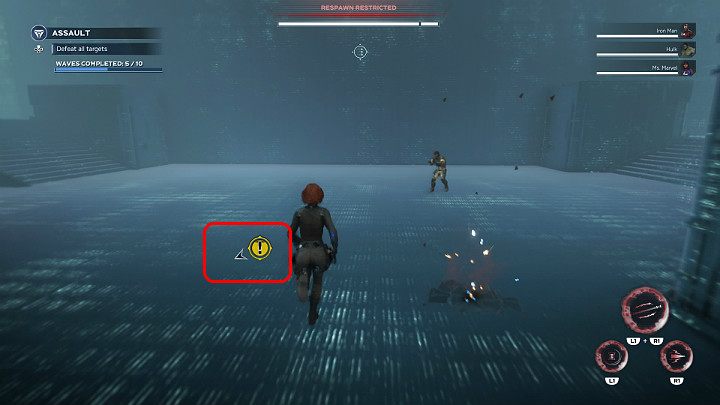 Attacking an opponent that has a protective shield with the usual light and heavy attacks can be pointless as the shield is able to absorb all sort of strikes. To defeat opponents with shields, you have to approach them strategically and defeat their defenses in the first place. There are several ways to do this:

As you play through some of the missions in Marvel's Avengers, you'll come across special AIM storages and facilities where you can find top-class equipment, as well as additional collectibles like comic books and raw materials. To open the entrance to the AIM warehouse you will first need to solve a puzzle with buttons, shoot at a certain point (use a ranged skill) or use the door opening console. 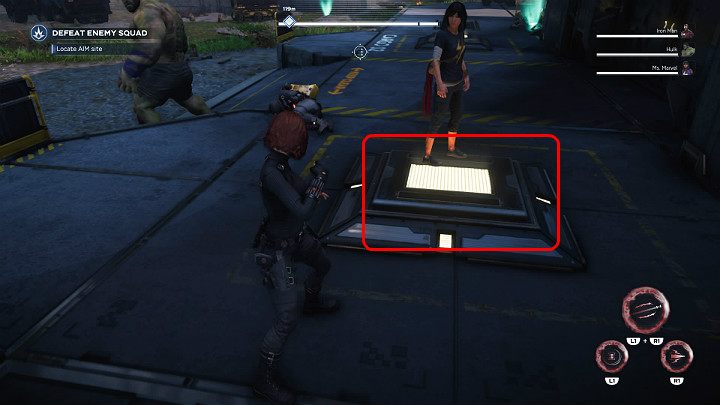 Around the entrance to the warehouse you can find a few buttons. Stand on them in order to activate them. The buttons are often close to each other, but you may have to look for them and then activate them all at a certain time.

You can find many resources in Marvel's Avengers that will be needed, for example, to upgrade your equipment. Some materials can be found directly on the ground after smashing certain containers or after defeating opponents, while others can be hidden, for example, on the walls of rooms high above the floor. 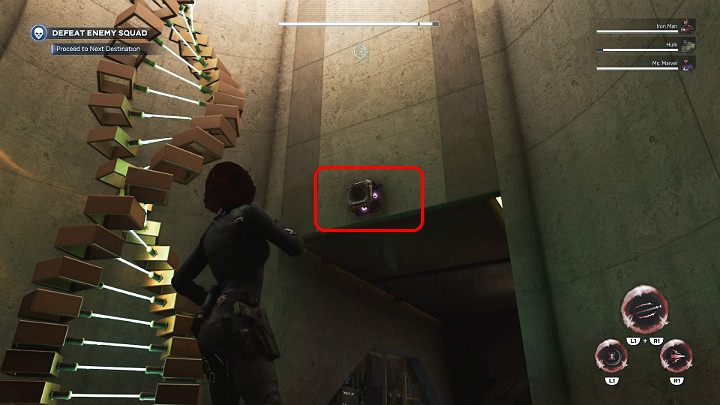 The abilities of superheroes in Marvel's Avengers were divided into categories and skill trees. By level up particular character, you will also receive skill points, which can be used to improve your character's abilities. Note that some skills and their enhancements are closely related and linked by a blue line (red frame), while others can be distributed independently (green frame). 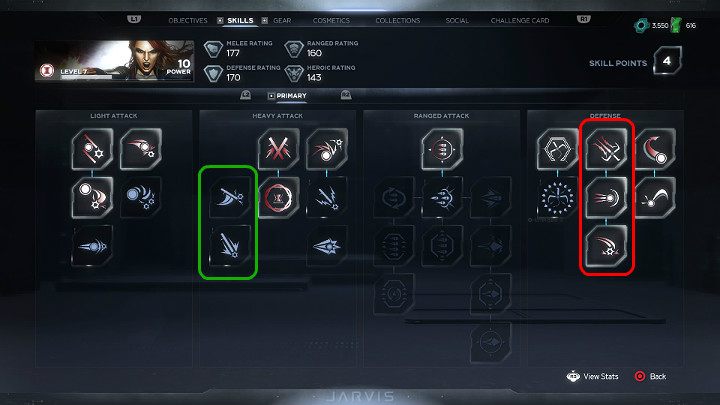 How to quickly equip best gear

Marvel's Avengers allows players to quickly switch equipment to the best they currently have. This is extremely useful during intense gameplay when there is no time to read the description of the items found. When you find better equipment, simply go to the character menu (by default, press the Touchpad on PS4), then press and hold the button responsible for equipping the best available gear (by default the L2 button on PS4). 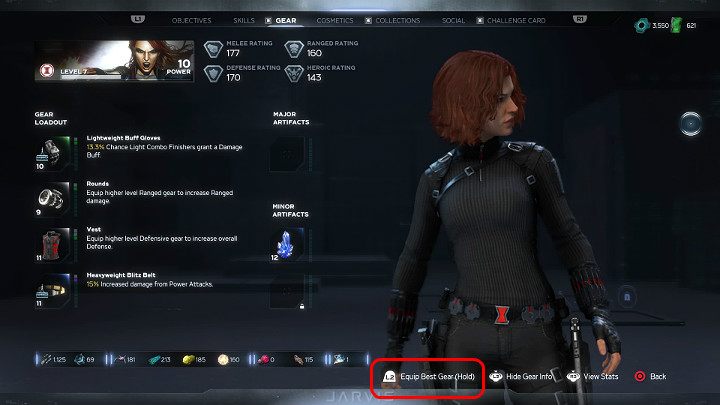 Disassembling unnecessary items is one way to get additional raw materials. What's more, full inventory makes it impossible to pick up additional items. Thus, it's worth checking your backpack from time to time to get rid of unnecessary items. To disassemble an item in Marvel's Avengers, simply highlight it and hold the corresponding button (Triangle by default on PS4). 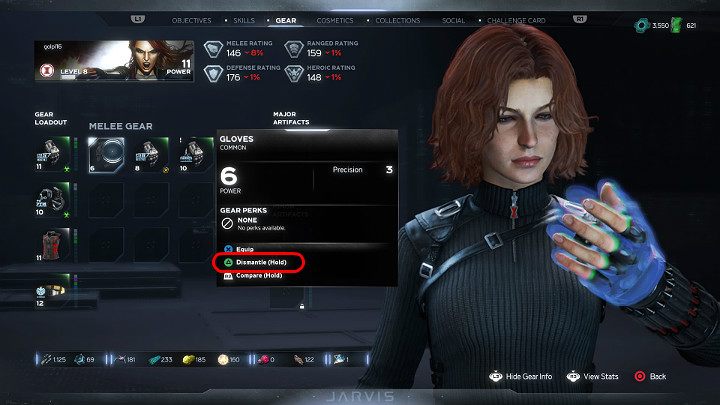 You don't have to fight every opponent that gets in your way when you're doing the main objective of the mission. If you care about time, you can focus on completing the task, such as taking over certain points or destroying marked objects. Once you complete the mission objective, all opponents in the area will simply disappear.