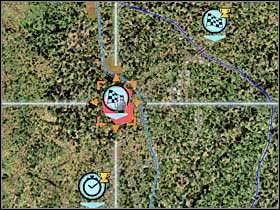 This is a rather simple racing challenge. If you're lucky, you will have to deal only with a small group of Ford GT's and much slower Mustang's will form the rest of the pack. You will have to complete four full laps of the track. Going through the first set of bends should be simple. Use the brakes once you've reached a right turn (#1). As you've probably noticed, you won't be allowed to cut through any of the corners, including this one. Watch out for the damage bar, so you won't deplete it entirely. The final section of the lap will require you to go through a very similar turn (#2). Once again, it's very important that you use the brakes here. 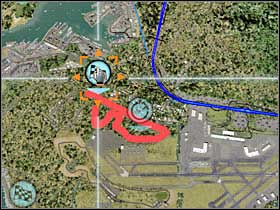 I wouldn't recommend trying to fulfill this task right away, especially if you're driving one of the D class cars. I'd strongly recommend saving up more money in order to be able to buy a Mercedes McLaren SLR. Sadly, this is one of the most expensive cars of this game. You will have to spend 460000 on the car. It would also be wise to fully upgrade it. This is going to cost you 220000 dollars. Nevertheless, I wouldn't recommend skipping this operation, mostly because a stock SLR is much slower from the rest of the A class vehicles, especially Saleen S7. Having this car at your disposal should secure your win here. Start off by heading towards the right edge of the screen (#1). You will have to enter the freeway here. Avoid hitting the nearby walls, because that would have slown you down. Keep going straight. You should be able to extend your lead here. You will come across a very difficult hairpin later during the race (#2). Make sure that you have used the brakes earlier than usual, so you won't leave the track at any point of the race. Additionally, don't cut through this corner, because it would be very risky. The final part of the lap will require you to go through several tight corners, however there's nothing in particular you should be worried about. 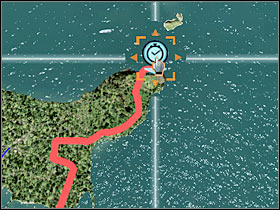 I wouldn't recommend choosing this challenge unless you want to complete all singleplayer races of the game. Otherwise it would only be a waste of your precious time. First of all, you won't be able to win this race by using a much slower Maserati GranSport. As a result, you will have to buy Maserati MC12. Sadly, it's a VERY expensive car. You will also have to fully upgrade it. This entire operation will cost you more than a million dollars. Furthermore, upgrading this vehicle will only allow you to win this race. You won't be able to compare it to the rest of the A class vehicles. MC12 is going to be much slower and driving it is very unpleasant, especially at higher speeds. Winning this time trial challenge is going to be very difficult, mostly because you won't have much time to reach your final destination. As a result, you won't be allowed to make ANY major mistakes. Start off by choosing the LEFT lane (#1), mostly because you won't have to worry about other cars for the time being. This is a very useful bonus, however once you've reached the first junction, you will have to go back to the right lane. Be careful. There's a very challenging left turn nearby. You will have to use the brakes much earlier than usual (#2). You will also come across a second turn very soon, however it's much easier to get past it. Now you will be dealing with a lot of straight open roads, however you will have to turn right at some point of the race (#3). Keep moving forward (#4). It's very important that you maintain higher speeds. You won't be allowed to hit any of the civilian cars, because you wouldn't make it to the finish in time (obviously I'm talking about receiving a gold medal). 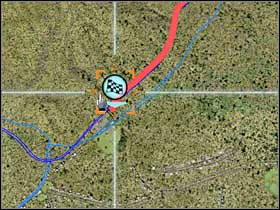 I think it's fairly obvious that you won't be able to proceed with this race unless you have a Zonda at your disposal. Buying and upgrading this vehicle will cost you about 600000 dollars. That's not too much (for this class), however you should know that Zonda won't be as fast as Saleen or Enzo, so you won't be able to use it in all A group races. This challenge is going to be quite simple, however you won't be allowed to make any mistakes at the start of the race. Try reaching the entrance to a freeway without hitting any objects or cars along the way (#1). This should allow you to secure an early lead. Now you will only have to start accelerating (#2). Be careful, though. Zonda is quite unstable at higher speeds and you will also be given less grip. 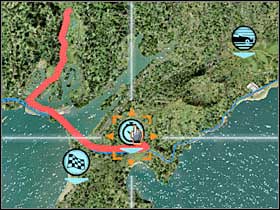 I'd strongly recommend taking a Chevy Corvette Z06 for this time trial challenge. As a result, you shouldn't have any major problems winning the gold medal. You will have to deal with a very difficult hairpin near the start (#1). Keep moving forward. You will come across a right turn, however you will probably have more problems with the second group of corners (#2). It would be wise to use the brakes often, so you won't hit any civilian cars along the way. Don't forget about the damage bar and the possibility of receiving penalty seconds. Nevertheless, you should be able to reach the finish line about 40-50 seconds before the time limit runs out.