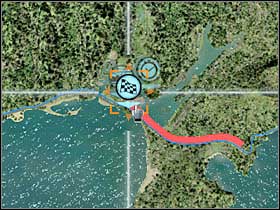 This is going to be one of your first mixed challenges. It means that you can choose cars from both classes for this race. I'd strongly recommend that you purchase an E-class vehicle, especially since there are a lot of straight lines here and you would have some serious problems catching up with the rest in a F-group car. You shouldn't have any problems taking the lead (#1). If you're lucky, your opponents will probably crash into something, so you won't have to worry about them anymore. There's also a single jump later during the race (#2). It's very easy to make a mistake here, so it would be wise to slow down a little. Other than that, there's nothing you should be worried about. It's very easy to win here. 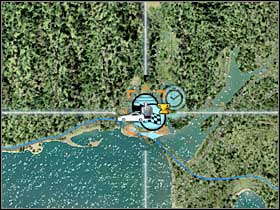 You'll probably going to have some problems with this challenge. It's mostly because you won't be allowed to make too many mistakes. Otherwise you wouldn't be able to gather enough speed points. There's also a little time to reach the finish line. You will have to focus all of your attention on two things - maintaining a high speed and avoiding incoming traffic. Keep heading towards two checkpoints. There's a mild curve waiting for you here (#1). It leads to the second radar, so you can't slow down. Ignore the right turn and keep going straight. You shouldn't have any problems reaching two other checkpoints. The last radar is going to be hidden on your right. You will have to make a turn at some point of the race (#2), however if you have some more time you could consider preparing a little more. You would have to turn left, however this won't be necessary, especially if you're using one of the faster vehicles from the E class.