In Teamfight Tactics it is difficult to find one reliable strategy and composition. Much depends on what our opponents have at their disposal and what heroes you will draw. During the first few rounds it is not worth to focus on one particular composition/tactics, but rather to adapt to the situation on the board. If you manage to get 1-2 two-star characters of the same origin or class, then you can already think about assembling an army. However, this is not necessary.

Some compositions work well at the beginning of the game, but after 15-20 you can think about changing them. Such sets are Garen, Mordekaiser or Darius (Knight), to which you can add Vaynve or Lucian to have a Noble synergy. This type of composition will do well in the initial rounds, and during this time you can collect heroes of different origin or classes on a bench. Fill up your initial setting with them.

12 September - we have added a composition of Shapeshifting Sorcerers.

16th of August - we added the "Noble Crowd" composition, which in patch 9.16 is by far the most powerful one. This formation (if properly created) is unbeatable in the final phase of the game, but it's quite hard to assemble.

29 July - we've added the Demonic Yordle composition. The demons offer the best synergy in the game right now; combined with the Yordle, they can beat just about anyone.

July 18, 2019 - a new composition has been added "Volibear - Brawlers/Elementalists/Glacials"

July 11th, 2019 - we have added a new composition, Ninja / Elementalist, and have added a new section to the previous strategies called "When to create?" which informs when you should create a given army.

Shapeshifters have great heroes, which is further enhanced by a very good synergy. With them, your composition has enough health and CC to give wizards time to deal massive damage. If your opponent has a high resistance to magic, there is always a strong Shyvana that can be used.

When to assemble it?

You can enforce it at any time, but it is best to assemble such team if you can build a lot of wizard items and quickly get three shapeshifters.

First, focus on getting three shapeshifters and demons or four wild ones.

Try to invest your first items in Kennen. With Morelonomicon and the Guardian Angel he should safely lead your army through the early stages of the game.

You can give items to Nidalee. You will sell her afterwards, but at the beginning she's very strong.

Your main carry will be magicians, but Shyvana or Gnar are also a good choice if you have bad luck with magical items.

Nobles are the best possible composition at the end of the game in patch 9.16. Its drawback is the fact that it's hard to assemble and you have to count on Kayle. After proper setup it is practically unbeatable. 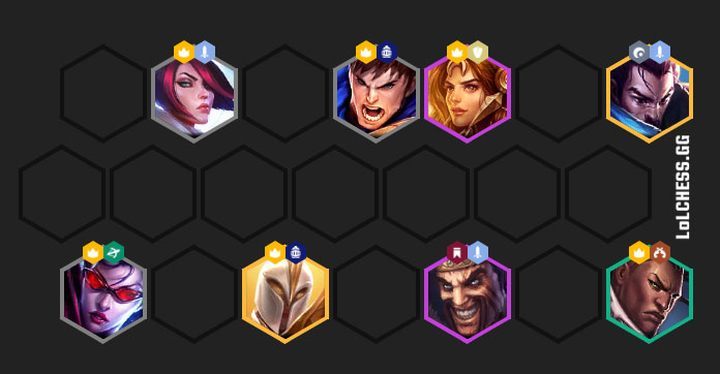 When you should assemble this team?

It can be enforced at any time, but never use more than 3 nobles if you cannot put 6. Keep the rest on the bench and wait to get Kayle.

There are two good ways to play the early stage of the match. You can use Knights (Darius, Garen, Poppy, Sejuani) or Rangers/Swordsmen (Lucian, Gankplank, Aatrox, Graves, Draven).

Form a well-functioning composition from these three synergies that contain as many Nobles as possible. Initially it will probably be Garen, Lucia, Fiora or Vayne. Then you can include Leona. Gather other Nobles on the bench.

An alternative to Draven is Jinx, who also works well as a carry at the end of the game.

This composition should not be focused on getting three stars, but sometimes it is worth collecting two two-star characters of the same type (Lucian, Vayne, Fiora). This will allow you to equip one character with strong items, then sell it and give all items to Jinx/Dravena or Yasuo.

On a carousel, your priority should always be Kayle.

The most important items in this composition are Infinite Edge, Red Buff, Rapid Fire Cannon or Luden's Echo.

If you can't find Kayle for a long time, focus on the synergy of Sword Masters and strengthening Draven.

As soon as you get a two-star Rengar. This is the main character of the composition.

How to play it?

On the carousel, first of all look for Recurve Bow and Tear of the Goddess to assemble a Statikk Shiva. The Tear will also be useful for Luden's Echo or Seraph's Embrace, and the bow, for Phantom Dancer or Guinsoo's Rageblade. Then, you will also need Needlessly Large Rod and Giant's Belt, to assemble Morellonomicon for Cho'goth. Later on, focus on developing the Guardian Angel (B.F.Sword + Chain Vest) and Zeke's Herald (B.F.Sword + Giant's Belt).

The composition is based on demons, who are currently the strongest synergy in the game. While it could use some tanks, it makes up for them with high CC, huge area damage and mana drain.

This composition is strongly dependent on specific items, so you can assemble it at any time, provided you have the items. The only problem is the fact that currently everyone wants demons, so they can end up quickly.

As far as items are concerned, Morgana should get Locket of Iron Solari as soon as possible, Kennen - Morelonomicon or Locket, and Aatrox is best with a Guardian Angel and an item for damage.

The composition is entirely focused on one character, which is Volibear. Properly equipped, he can defeat anyone, but he needs good cover and specific items.

When to assemble it?

If you manage to get some Brawlers at the beginning and draw or get Recurve Bow. From two such items you an create Rapid Fire Cannon, which is an essential item for Volibear.

What to watch out for?

This composition is very compact, so it can have problems against heroes with area of effect damage. Brand and Aurelion Sol can very quickly penetrate your troops. To avoid this, try to work with Blitzcrank's location. If you set it right, you can get rid of the danger right from the start of the battle. Also, sometimes it works well to set up units in one or two ranks.

A very good composition, but it requires a little bit of luck. It relies on Pyke's strength and the synergy between the Elementalists. Works great at the beginning of the game or in the middle phase. This team isn't as efficient in the later phases but it should still be sufficient, especially when you manage to get Anivia.

When you get a two-star Pyke and you give him Spear of Shojin, you will increase your chance of getting Elementalists (fast Brand).

A great composition that doesn't deal huge damage, but is very resilient and has enormous CC. Thanks to Elementalists' synergy and the Guardians, our first line will be virtually unbreakable, and Ashe, Brand and Anivia should be able to deal with the back of the enemy.

When you manage to get one or two-star Glacials and get three Elementalists fast.

How to play it?

A very pleasant composition, which does well from the very beginning, and then practically blows away enemies. Her main carry is Aurelion Sol, dealing massive area damage. Five tanks should be enough to save him from the enemy's DPS.

When you manage to get a two-star Kassadin fast and you have a few items for mages.

One of the best and most stable compositions in the game. Four tanks take damage and use CC, and four shooters in the back deal massive damage.

When you manage to quickly get either two-star Vayne or Varus and you get a few items for AD Carry (Spear of Shojin, Guinsoo's Rageblade, Infinity Edge).

This is a composition that is very easy to build at the beginning of the game and is very strong at every stage of the game. It has a great DPS, good tanks and quite impressive CC.

When you manage to get two two-star units from the Wild synergy (Nidalee, Warwick or Ahri).

Very powerful composition, which will work well in the initial phase of the game, as well as at the very end. It has a good balance between tanks and damage characters. Warwick, Nidalee and Ahri should be the basis of this composition. Then complement it with other shapeshifters, like Shyvana and Gnar. The set is complemented by one of the strongest units in the game - Aurelion Sol. Thanks to it you will complete the synergy of Dragons. The disadvantage of this composition are quite high prices of most of the units.

Additional characters: It is best to add any magician to this composition to get the synergy of Sorcerer and Ninja, who receives the synergy when he is alone. Suggestions: Lulu, Zed, Pyke, Kennen.