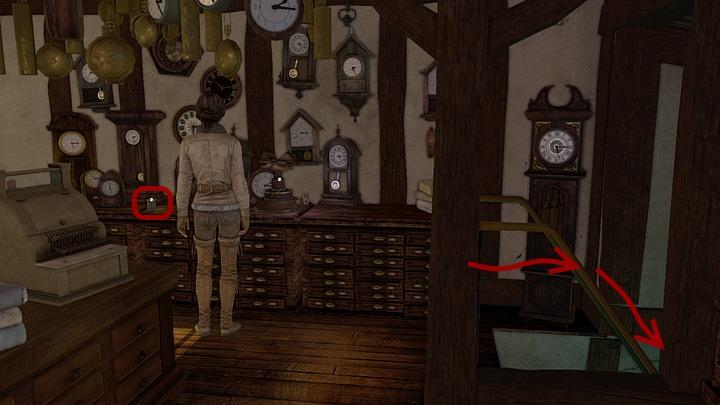 Begin the search for the medication by taking a look around the workshop. Approach the set of clocks found on one of the walls (north side of the room) and click on an active point on the left side of the counter to pick-up a cup. Take a look at the mechanical bird that stands on the right from him and, while zooming in, turn it on which will irritate the host. You can also try to leave, even though the door are closed (both actions are required for an achievement). Use the staircase found on your right to descend to the basement. Reach the end of the room to find Kurk's unfinished prosthetic leg which is lying on the table. 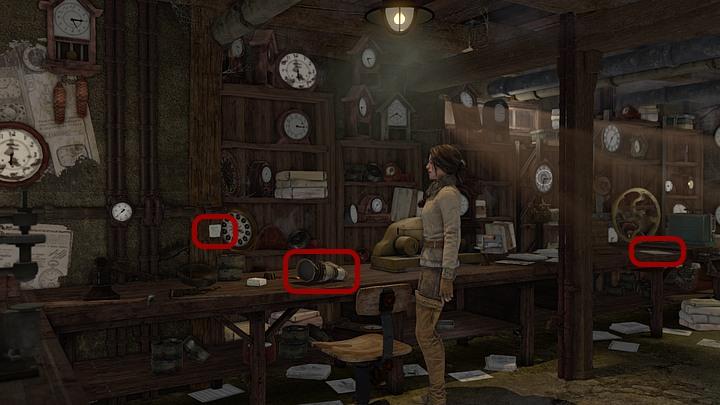 Make a close-up of the table with the prosthetic, and take a look at the note left by Sara (screenshot above) which reminds Steiner to take his medicine. Leave the close-up and approach the right side of the counter to find a newspaper fragment?describing a nuclear plant breakdown in Baranour (you can find it in your inventory and read the translation by using the mouse wheel to scroll down the text). Return to the ground floor.

Get behind the counter which is used by Simon (stand on the same side as he is) and make a close-up of the table to check the contents of the drawers found on this side of the table. One of the drawers hides Steiner's prescription, but you'll still need to find its contents.

Prepare the medicine for Steiner 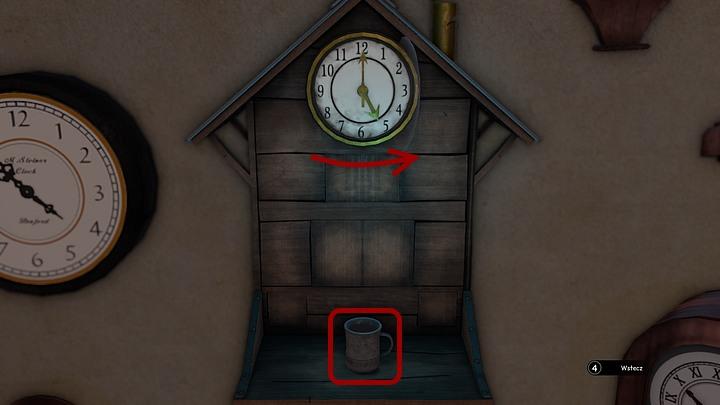 Take a look at the house-shaped clock hanging opposite to the counter (on the right side of the stairs). Enter a close-up of the clock and place the previously found cup on the base of the clock. Pull back the glass guarding the face of the clock and move the hands to an hour that was suggested by the note left by Steiner's granddaughter. The note says that the medicine should be taken (and is delivered) 3 hours before dinner. As we know, the man eats his dinner at 20, so switch the hour to 17 (place the large hand on 12, and small hand on 5) which will unlock the compartments that store the medicine. Once the cup is supplied with both the pills and the liquid, take the cup from the base of the clock and bring it to Steiner.

Once medicated, the man will feel much better , she will speak with Kate (if you have already read captain Obo's journal then this dialog option will appear during the conversation and for that you get Valsemborgate achievement) and after that will descend to the basement. Follow him and use the opportunity to search through an open cardboard box found right next to the stairs. The box contains a number of film reels - our job is to find the one with an octopus label in its center. 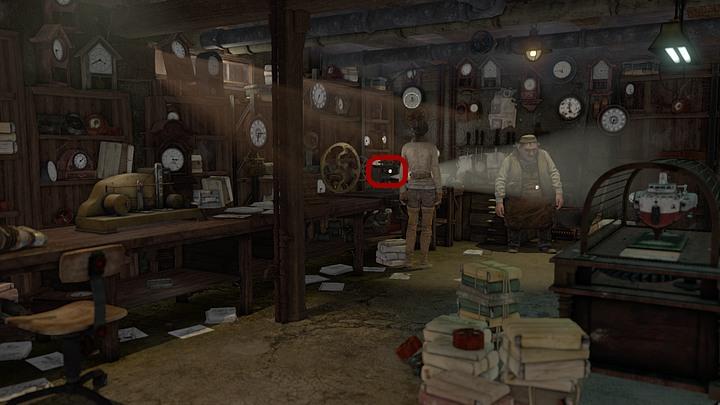 Approach the projector on the far side of the basement counter and use the found film reel to begin the screening. You'll watch a short movie about Baranour, the city that was the center of the article found earlier. Once the screening is over, return to the ground floor. You'll encounter both Steiner and Sara, who will tell you more about Baranour. (The story is rewarded with a new achievement - Steiner family).

When the old man goes down so he can finish Kurk prosthesis you should follow him, speak about all topics and then approach the ferry's model, standing in the center of the room, and while zooming in you must start playing with the light switch - turn the light on and off (in the lower right corner of the model). Do it a few times and Kate will manage to irritate Steiner for the third time (Grumpy old... achievement).

Syberia 3 Game Guide is also available in our Mobile App