You won't get to Bastille unless you find Marat beforehand. The man is hiding in Montmartre. On this page of the guide, you will find a walkthrough of The Recluse of the Abyss quest. You will also encounter the The Centaur and the Unstable Scout.

You will receive this task after completing the mission To Les Invalides and visiting the Cordeliers Convent again. Robespierre will give it to you.

During this task, it is worth collecting Choderlos de Laclos Echoes.

During this task, you will encounter Lumberers, Miners (you can read about these opponents on a separate page: Labourers), and Prototypes (you can learn more about them in the dedicated section of the guide). You will also face Couriers, Gunners, and Watchmakers (these Automats are described here: the Arachnids). Moreover, get ready for a fight with Butcher (you can find information about them on this page: Cooks). In addition, you will face a Statuary Ram (you will learn about him in the Ramssection)

Head to Montmartre. From the Horseless Carriage go down towards the valley. You will encounter 2 Lumberers there. 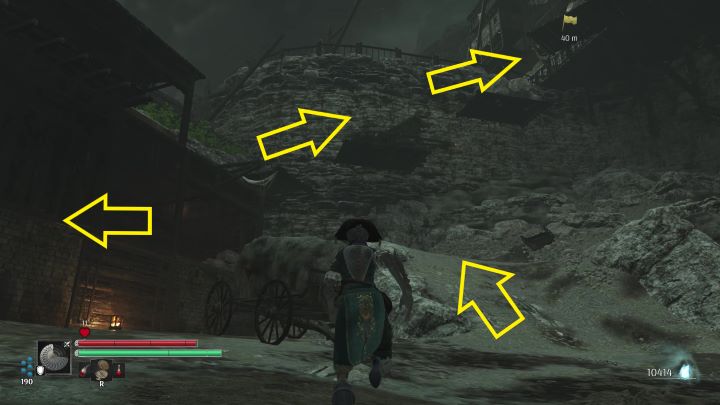 On the left side of the square is a building. From its floor you will get to platforms hanging along the rock wall. You can climb there from the warehouse or by walking up the prominence.

Jump from one platform to another, using The Selenite Momentum if necessary. Once you get to the top, climb the stairs to the platform. You will find there a Vestal.

Descend to the lower platforms again and follow the path ahead. You will face a Gunner and Lumberer. 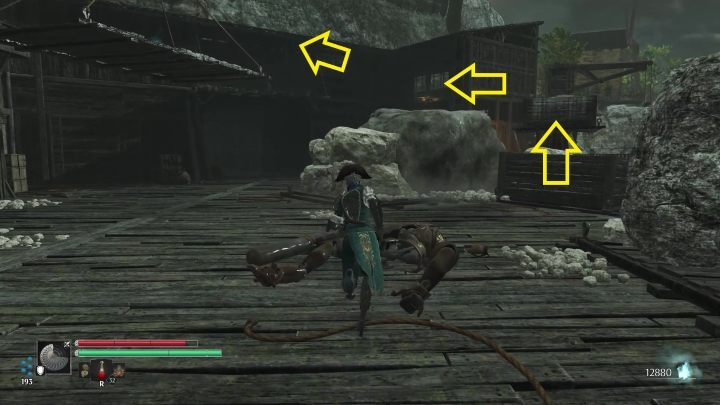 Climb the crates on the right. From them and the rock you can get to the hanging platforms. 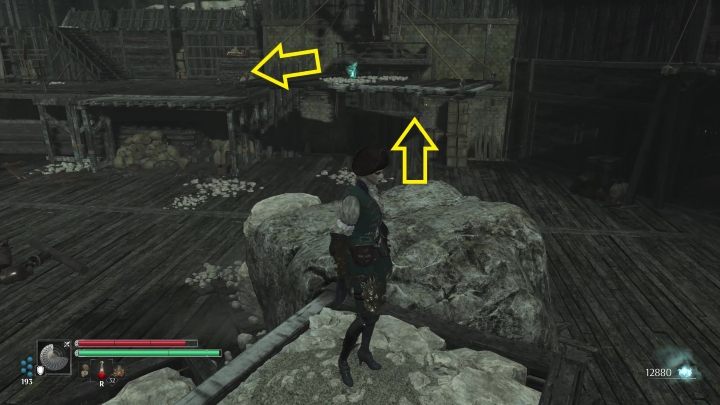 After them, jump to a higher level of the mine. In the square, you will encounter a Butcher and Gunner. 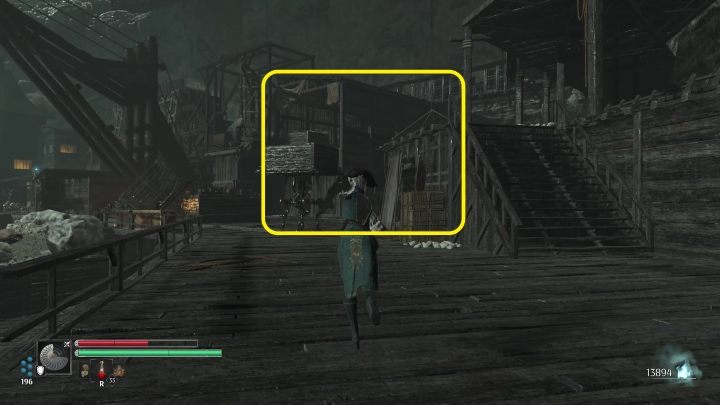 You need to get to the floor of the warehouse marked above. You can do this by jumping on the hanging platforms (you will get there if you climb the stairs to the adjacent building). However, in the warehouse mentioned before, there is also a passage to a higher floor.

Once you get there, you have to jump down to the inner courtyard. It is guarded by a Lumberer, Messenger and Gunner. 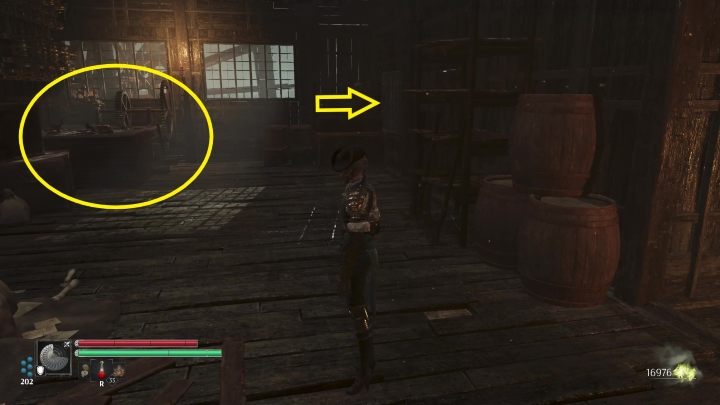 Go through the forecourt and in the adjacent room climb the stairs. On the left, you will find a mechanism you need to activate. On the right, there is a door you can open - it leads straight to the Vestal, which you have unlocked. 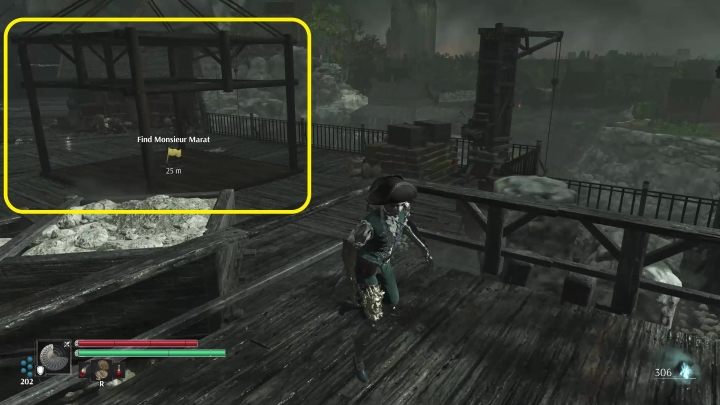 From the Vestal, head to the pavement below and take the elevator to the mine. After descending, it is a good idea to unlock the golden door behind you right away - this will open the main entrance.

Jump down to the area below you - the Lumberer is there. Being with your back to where you came from, go along the right wall. You will find a tunnel. Go through it, and after a while, you will see a Vestal on the right. Activate it. 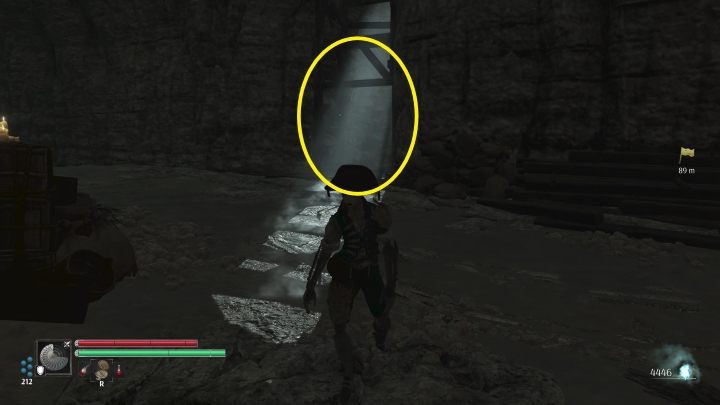 Opposite the Vestal, there is a fairly well-hidden passage you can use as a shortcut. Go through it and then straight ahead. You will encounter a Miner. 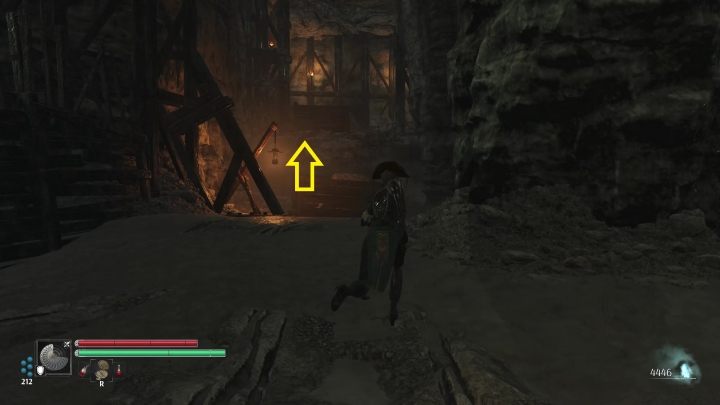 Climb up the crates to the higher part of the cave. A Prototype is at its top. Follow the path. 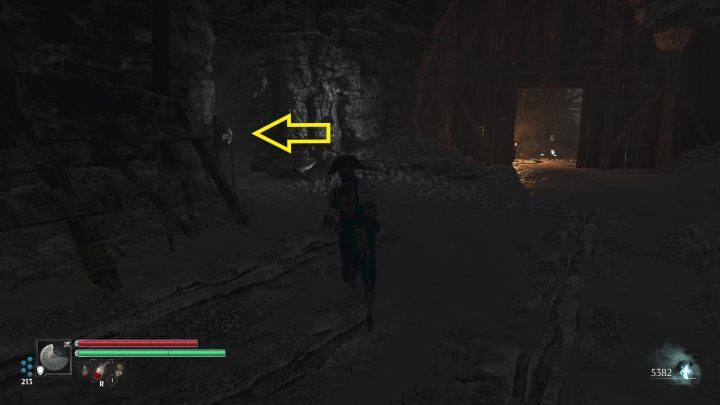 At the end of the rock ledge behind the door is a room with a Prototype and a chest. However, to complete the quest, you have to choose a path to the left. Follow it. On the right behind the tunnel entrance is a Vestal. Activate it.

You will have to choose right or left corridor. Both paths will eventually lead you to the same place. Take the right path, however. On it you will meet a Courier and Miner. 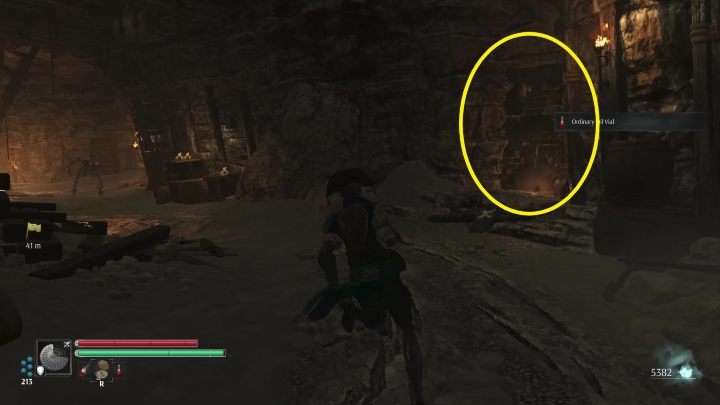 What's more important, there is a wall on the right that you can break. Behind it is a Heavy Prototype. Walk down the newly opened path. You will find an Echo. Exit the other way (also by destroying the wall).

Walk down the corridor and jump into the hole. Go straight. Keep going on the right side of the cave. Along the way, you will encounter 2 Lion Gunner and a Courier. Stick to the right side.

At some point, the corridor will split. Both paths will lead you to a large cave. However, the left will be faster. 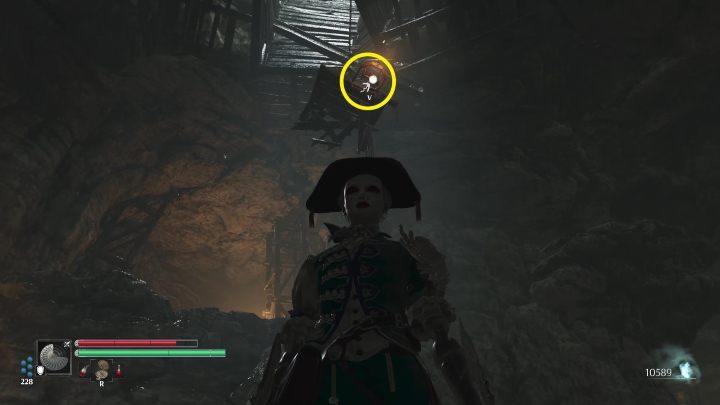 When you reach the cave, do not go down. Instead, pull yourself up. 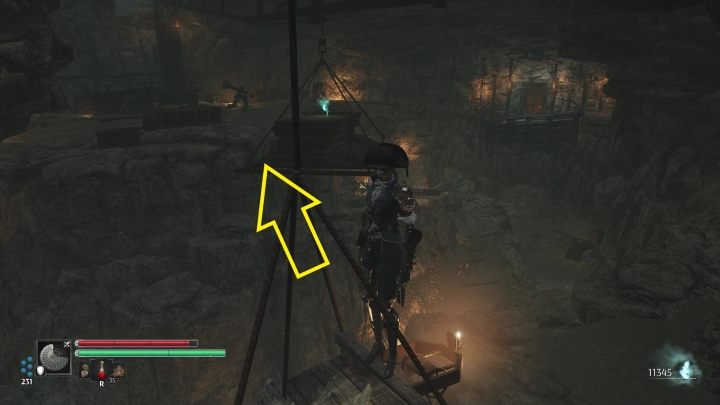 Using The Selenite Momentum, jump the hanging platform to the other side of the cave. You will face Statuary Ram, Courier, and Gunner there. 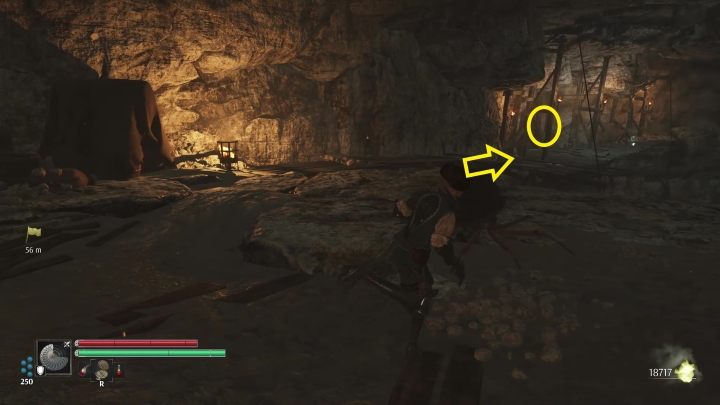 Follow the ruined pavement to the next rock ledge (you will have to jump). You will find a gate that you can destroy there. You will be faced with a choice - go right or left.

The path to the right will allow you to unlock the gate - it's a shortcut. Go to the left and destroy another gate.

Behind it, you will again have to choose a path. If you head to the left, and at the end of the way you jump down to the platforms below, you will find a part that allows you to upgrade the Burette. You will be able to return to the top by pulling yourself up. 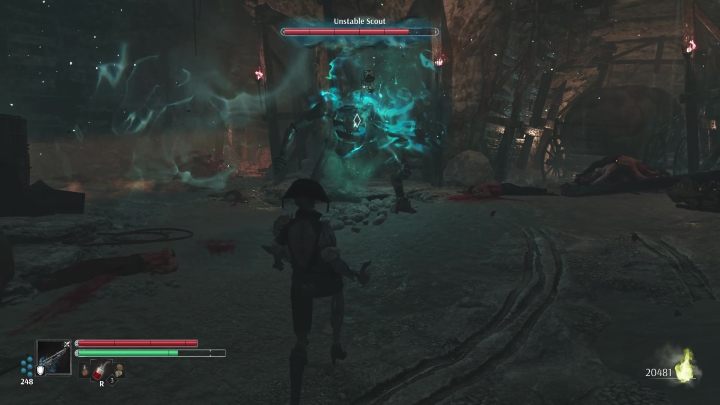 However, the correct path is the one to the right. It will lead you to the arena with the miniboss. A battle with the Unstable Scout awaits you. You will learn more about this enemy on a separate page of the guide.

Now go up the stairs to the top and activate a Vestal. Then climb even higher and destroy the weak wall opposite the respawn point. Enter the room. There are 2 paths coming out of it. 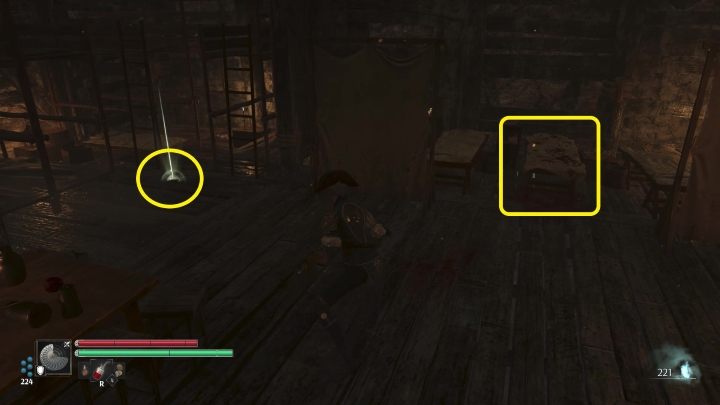 Turn left. Another Echo is there. Also, pick up the object lying on the middle bed. It will allow you to get an additional task called Glory and dishonour. Talking to Marat, ask him about the bloody mattress. This is also a good time to resume the For the Future of The Kingdom task.

Depths of the mine 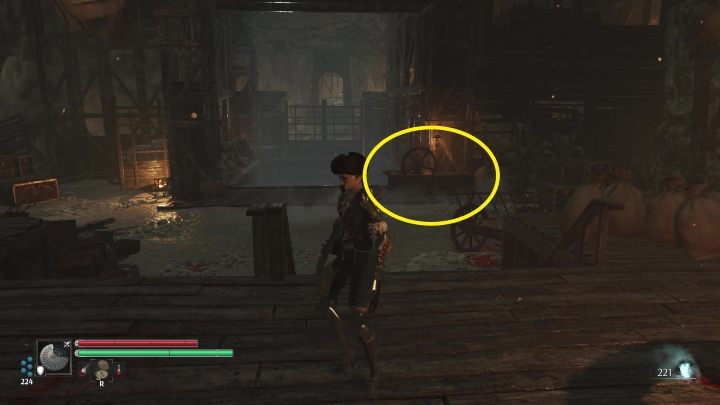 During the talk, Marat will send you to fix the walkway. Return to the room with a Vestal. You must activate the mechanism marked above. This will unlock the elevator that you have ridden before. Now you are able to ride it up and down. The further path lead to lower levels.

You will get to a room - exit it by destroying the gate. Go along the path. When you reach the first square, watch out for the Stalker (you can read more about them on the Serpents page of our guide). 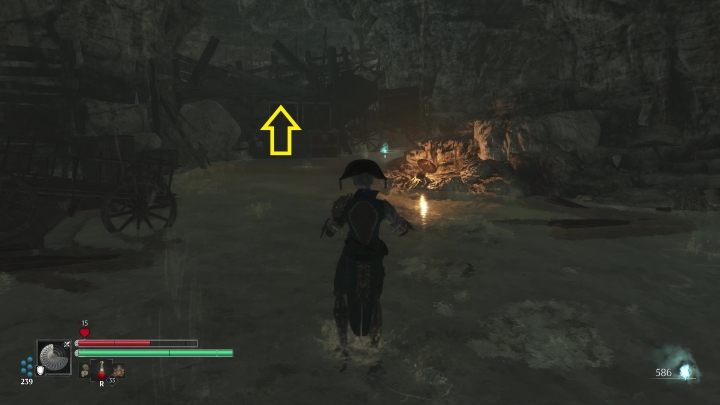 Climb up the crates. Jump to the other side of the barricade. In the square is an Acolyte and a Watchmaker, and a Lumberer is also going around the area. 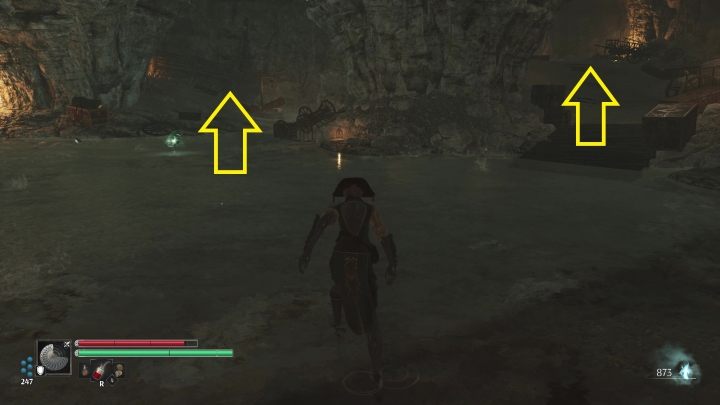 After collecting the Echo, return to the path on the right and take the upper route. Then jump over a small hole using the Selenite Momentum.

Go straight, stick to the right wall. Destroy the gate in front of you and continue along the path. Jump down to the bottom of the cave and unlock the Vestal. 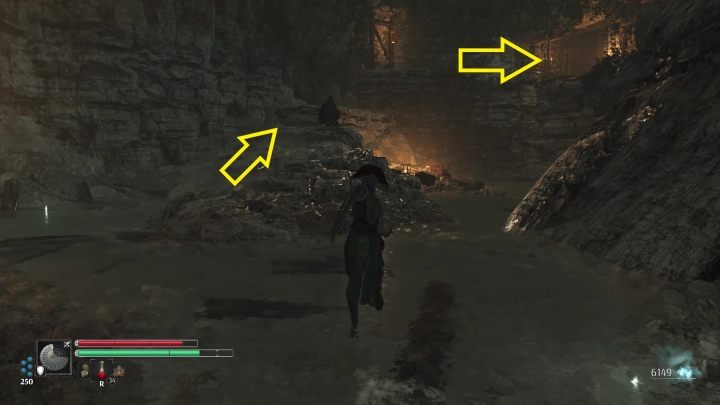 At the other end of the cave, you will find a passage. It is guarded by a Miner and Courier. You have to climb the rocks higher up. A battle with The Centaur awaits you at the end of the corridor. You will read more about this boss on a separate page.

After the fight, a conversation will begin between Marat, de Lacos, and you. You will learn how to get to the Bastille. It is also a good opportunity to continue the For the Future of The Kingdom task.

Exit the arena using a gate that can be destroyed. The path will take you to the elevator. Ride it to the top.

Go through the tunnel. After a while, you will see a Vestal. However, before you reach it, a cutscene will be displayed. Marat will talk to you. He will tell you that you should settle all unfinished business. When entering the Bastille, you must expect you will not leave until you defeat the Titan. 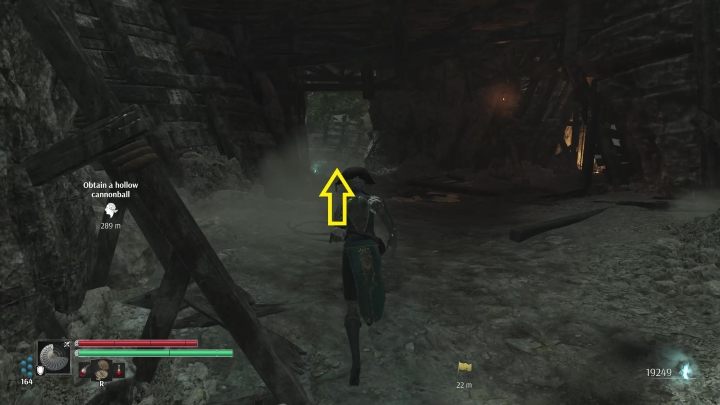 If you want to complete other tasks before Bastille, turn your back on the Vestal. Go through the tunnel on the left. When you reach the square, pull up to the top of the rocks. You will get into the garden. It is guarded by a Trumpeter. 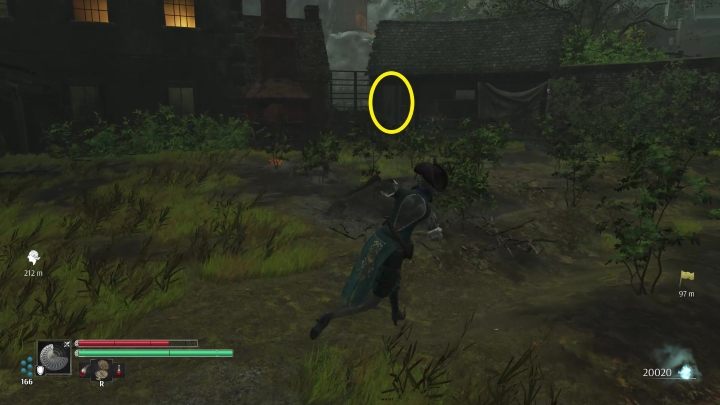 Go to the barn on the right. Inside you will find a gate that you can unlock. They lead straight to the Horseless Carriage.

If you decide it's time to head to Bastille, head straight through the tunnel from a Vestal. Jump down into the cave. It is divided into 2 parts, but both are connected. On the right is a Lumberer. At the end of the cave is a gate that can be destroyed. Walk through it.

Walk down the corridor and jump off the rock ledge again. You will get to a small square. On the right is a passage to another, larger cave. There is a Gunner standing on the rocks. On the other hand, the lower level is guarded by a Miner.

The exit from the cave is on the right. You have to jump down into the hole. It is gurded by a Heavy Prototype. Walk down the corridor. Along the way, you will encounter a Miner. You will reach another small grotto where there is a breach on the floor. Go down. 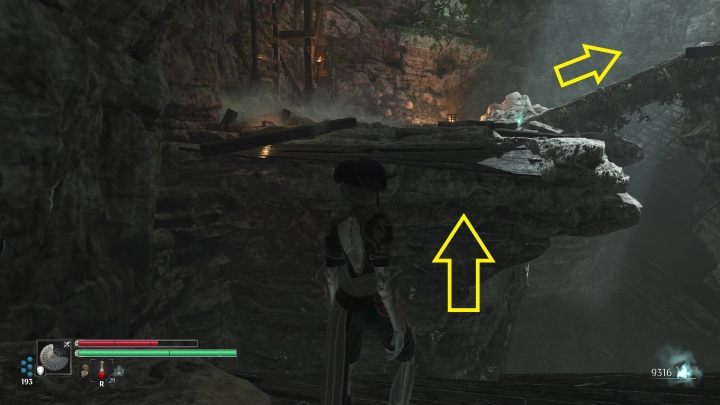 Go straight. At the end of the corridor is a wall that can be destroyed. Do it and enter the high cave. Now jump onto the rock ledge using The Selenite Momentum and follow the footbridge to the top. A Falcon and Gunner are guarding this place. 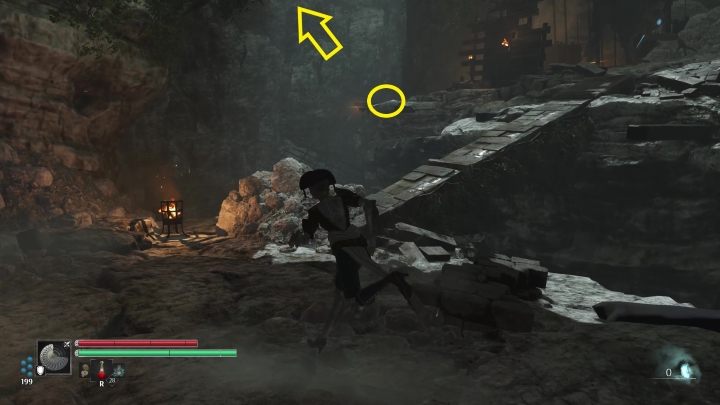 Go left, reach the edge of the precipice and pull yourself up to the rock ledge above. Follow the path. Along the way, you'll encounter a Bassoonist. At the end of the path use The Selenite Momentum to jump over the oblivion. 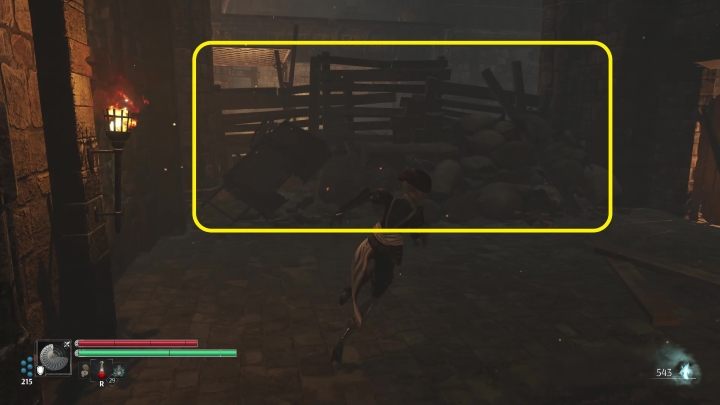 Jump over the barricade to the other side. Walk down the corridor. You will reach a room with a Butcher and a Courier. Destroy the gate, which is located on the other side of the room, and go through it. You will move to a new location. This concludes the quest.